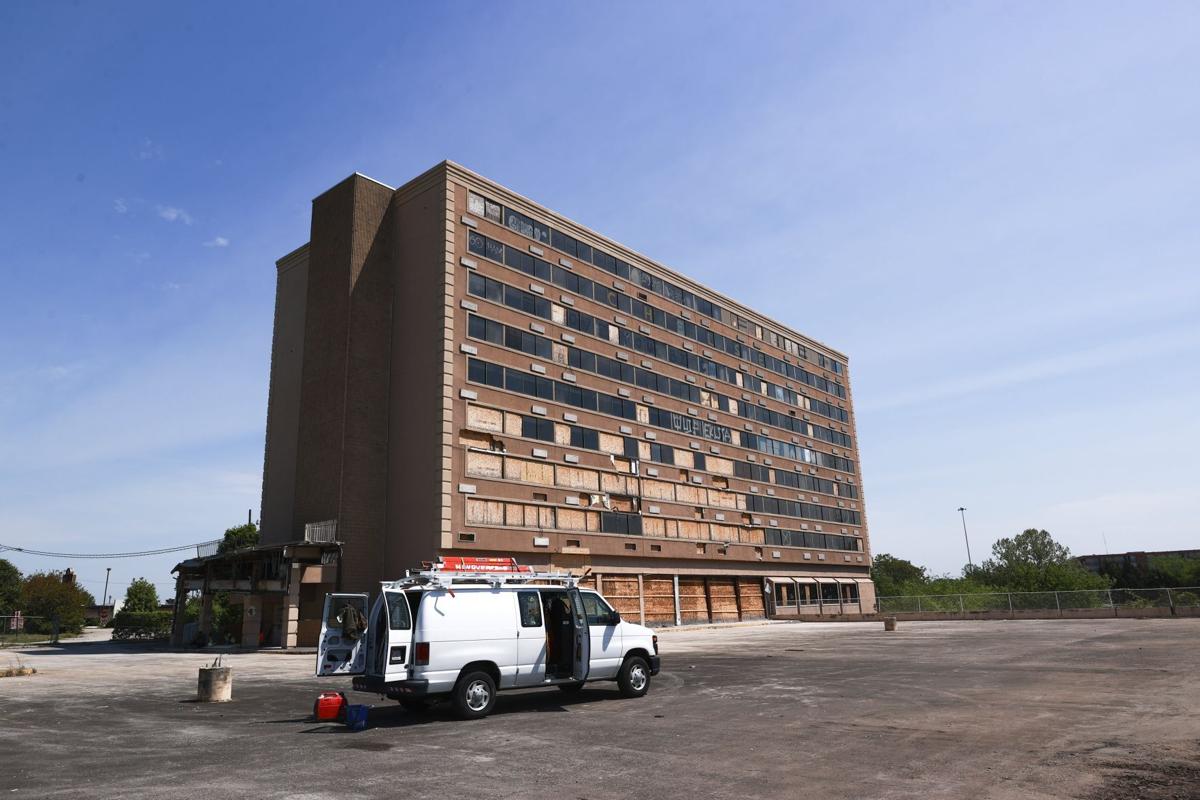 Built in 1973, the Ramada Inn in Petersburg is now boarded up and overrun with ivy. The city wants to demolish the building, which is next to I-95. 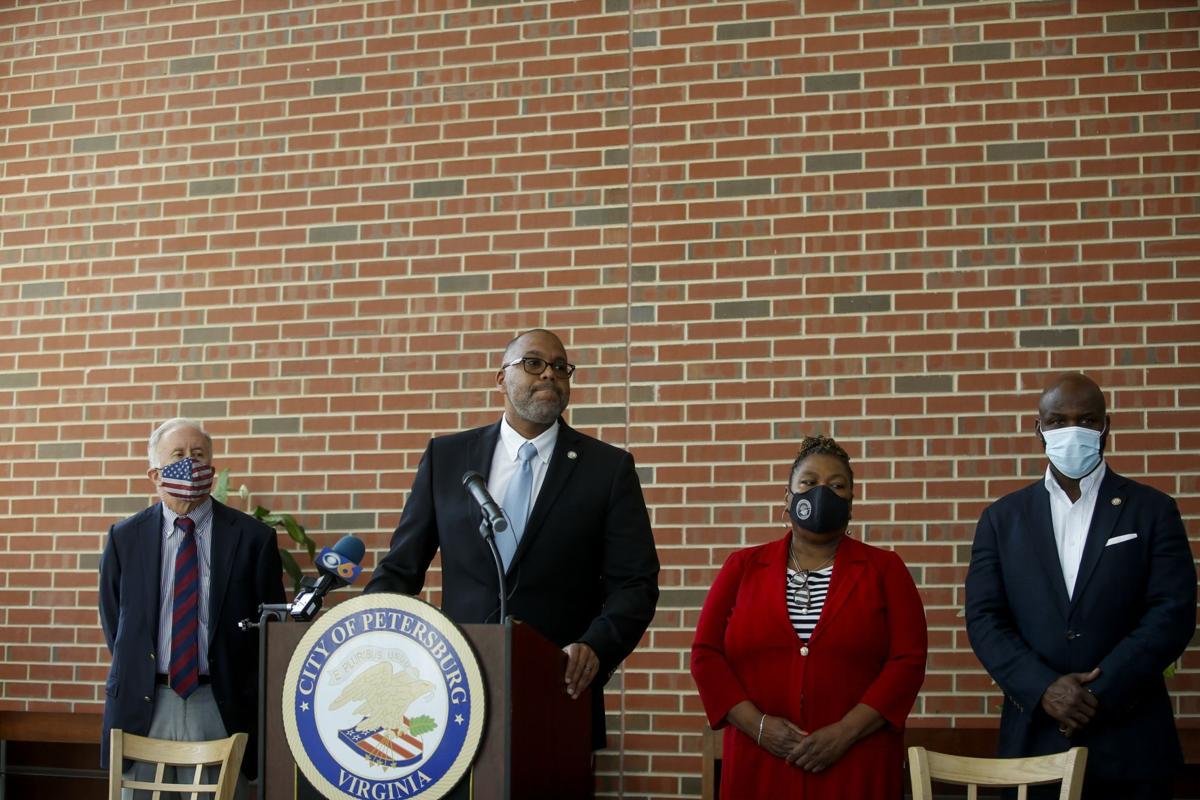 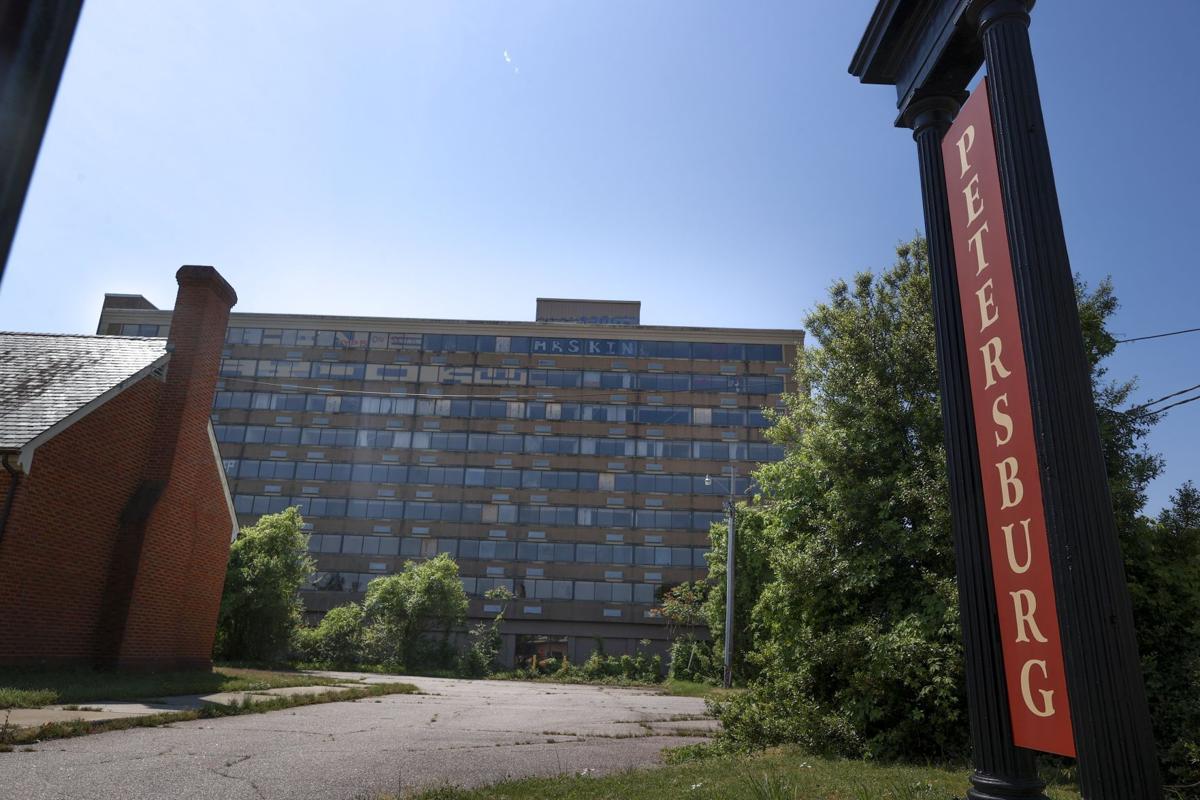 The old Ramada Inn was declared a public nuisance on Wednesday, April 28, 2021, in Petersburg, Virginia. 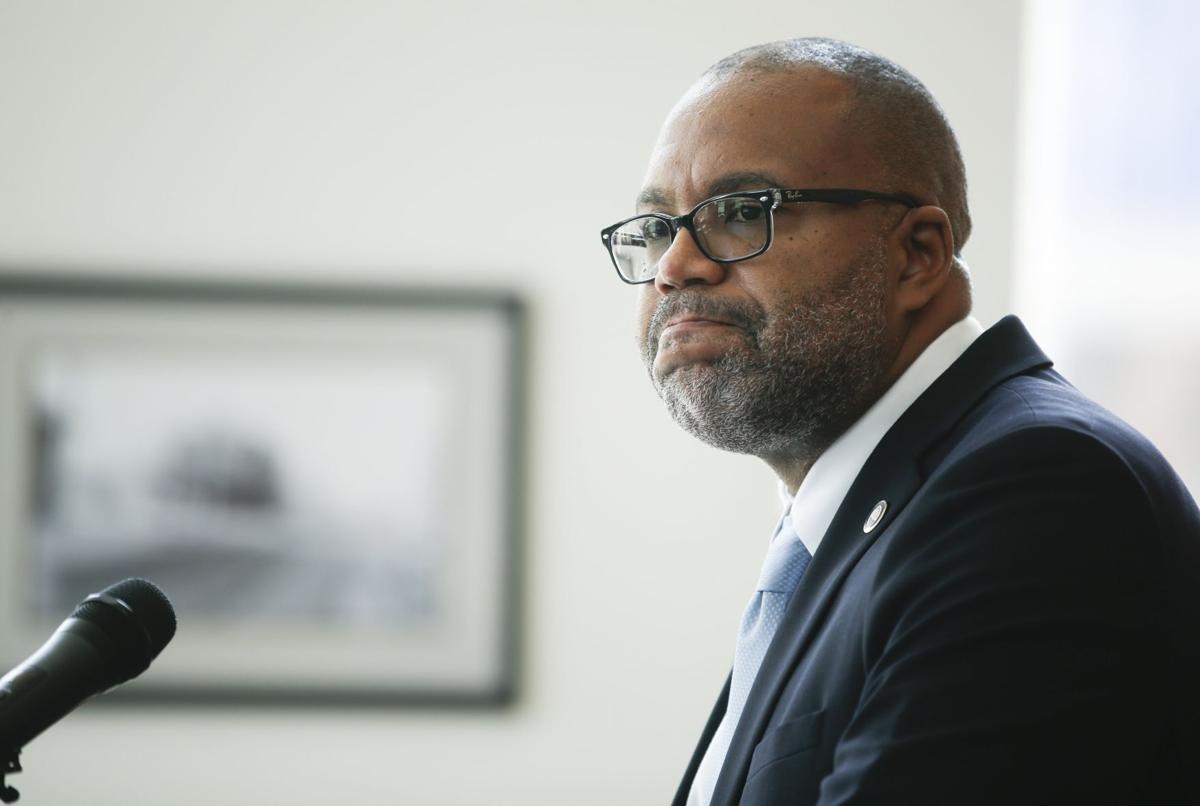 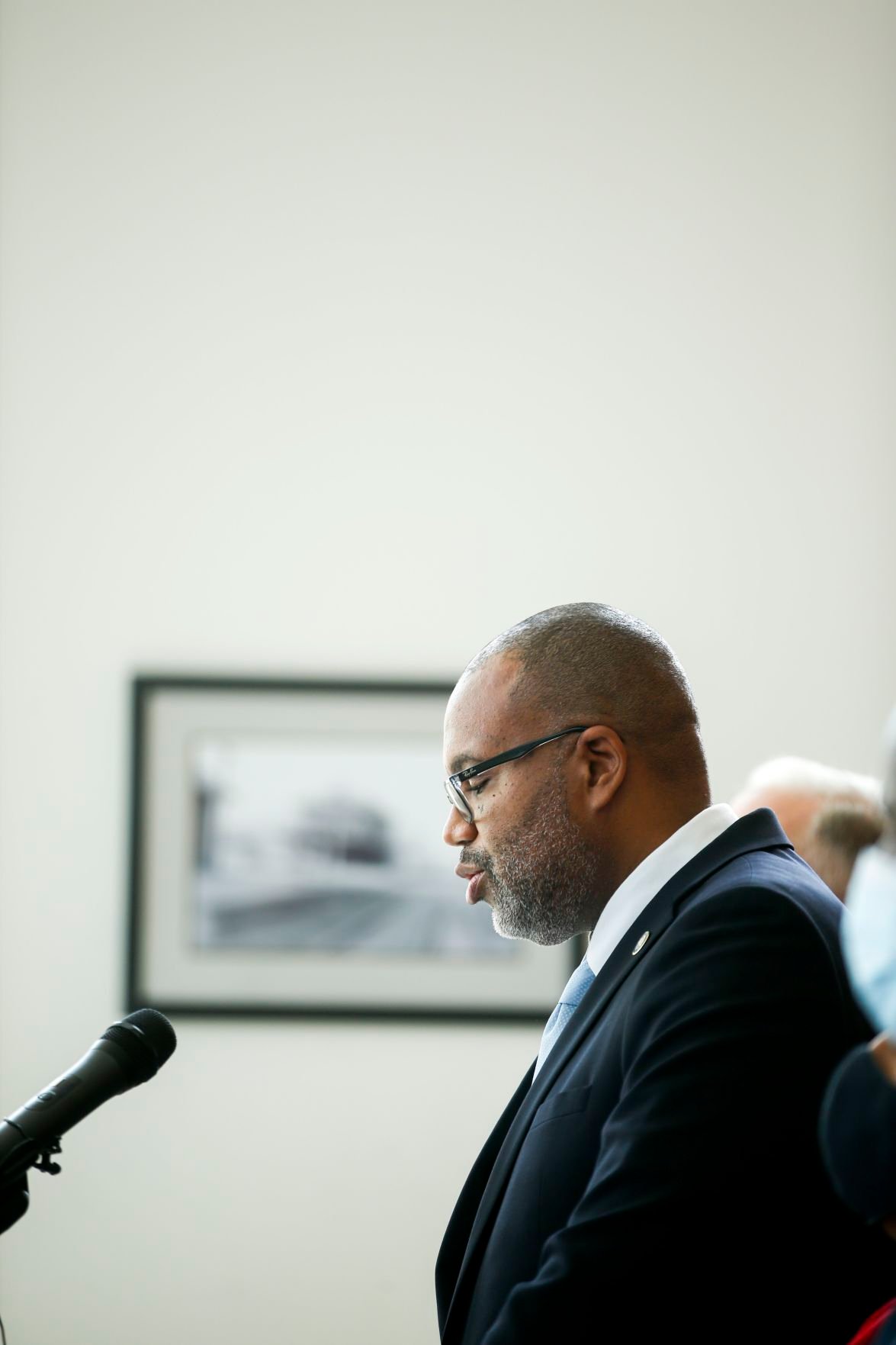 during a press conference declaring the old Ramada Inn as a public nuisance on Wednesday, April 28, 2021, at Petersburg Transit Center in Petersburg.

PETERSBURG — City officials are gearing up to take legal action to demolish the public eyesore that is the former Ramada Inn on East Washington Street.

Sitting right off Interstate 95, the onetime hotel sits boarded up with rotting plywood, smashed windows and ivy growing up the side of the building.

The city wants to see a new hotel on the property and is tired of waiting.

“At this point in time, we just can’t wait to sit and have nothing there. ... It’s something that needs to be done now, and not a year from now,” Petersburg Mayor Sam Parham said at a Wednesday news conference at the Petersburg Transit Center. “So the City Council is moving [forward], and we plan on pushing along to pursue the demolition of destruction.”

City officials want to enter into a partnership with Meridian Waste Acquisitions, the city’s local waste contractor, to demolish the hotel. However, Meridian is in the middle of two court cases, in Petersburg Circuit Court and Richmond Circuit Court.

The lawsuits center around alleged violations of the solid waste management permit and associated regulations at the Tri-City Regional Landfill. The landfill is set to be closed, and the outstanding issue in the two cases is to agree on a civil charge, according to a city news release.

Last week, Petersburg City Attorney Anthony Williams wrote a letter to the Virginia Department of Environmental Quality, asking whether Meridian could be permitted to demolish the former Ramada at no charge to Petersburg — in lieu of, or as an offset to, the landfill-related civil penalties.

Parham said Meridian “is open to helping the city” but added that the partnership cannot begin without state approval.

If the state DEQ allows for Meridian to help Petersburg, city officials would then go to court to seek an emergency order for the demolition. Parham expects to head to court next month.

Built in 1973, the old Ramada Inn sits at 380 E. Washington St. The hotel changed names several times, most recently in 2010 as the Fort Lee Regency. The building closed in 2012.

On April 6, the council voted to declare the former hotel a blighted property and a public nuisance. The vote also directed city officials to press hotel property owner Chris Harrison to demolish or fix the building. The council met in closed session that day to receive legal advice before voting in public.

On March 12, a “repair or demolish notice” had been issued to Harrison, his company and Virginia Hotel Development Group LLC by Petersburg’s property maintenance official.

Harrison did not respond to requests for comment Wednesday.

In a 2015 interview, Harrison said the former Ramada would be renovated into 125 hotel rooms and suites and be opened by 2017.

The hotel “was successful in the past,” Harrison said in 2015. “I just think property was mismanaged. Petersburg is going through a renaissance in terms of economic development. This would be a gateway project for the city.”

If Harrison fails to comply with the city ordinance, Petersburg will ask for permission from DEQ to proceed with the demolition on the city’s dime. The costs will eventually become a lien upon the property, so that the creditors can collect what is owed to them.

Demolition is estimated to cost about $1 million, according to city officials.

While Petersburg has brought itself out of financial ruin, putting down the money for the demolition “poses a major problem,” the city attorney wrote in the DEQ letter, because the value of the cleared property will likely be less than the cost to bring the space into compliance.

In 2016, the city teetered on the brink of financial collapse, as it ran a deficit of $7.7 million. City Hall positions were slashed, department budgets were cut, public school system funding shrank, and historic sites were shuttered. Last summer, city officials announced its largest fund balance in a decade: a nearly $8 million fund balance for 2018-19.

“And at this point in time, all of us here are concerned about the welfare and safety of all the citizens,” Parham said Wednesday. “It is a nuisance, and it is a bad look for the city.”

Built in 1973, the Ramada Inn in Petersburg is now boarded up and overrun with ivy. The city wants to demolish the building, which is next to I-95.

The old Ramada Inn was declared a public nuisance on Wednesday, April 28, 2021, in Petersburg, Virginia.

during a press conference declaring the old Ramada Inn as a public nuisance on Wednesday, April 28, 2021, at Petersburg Transit Center in Petersburg.