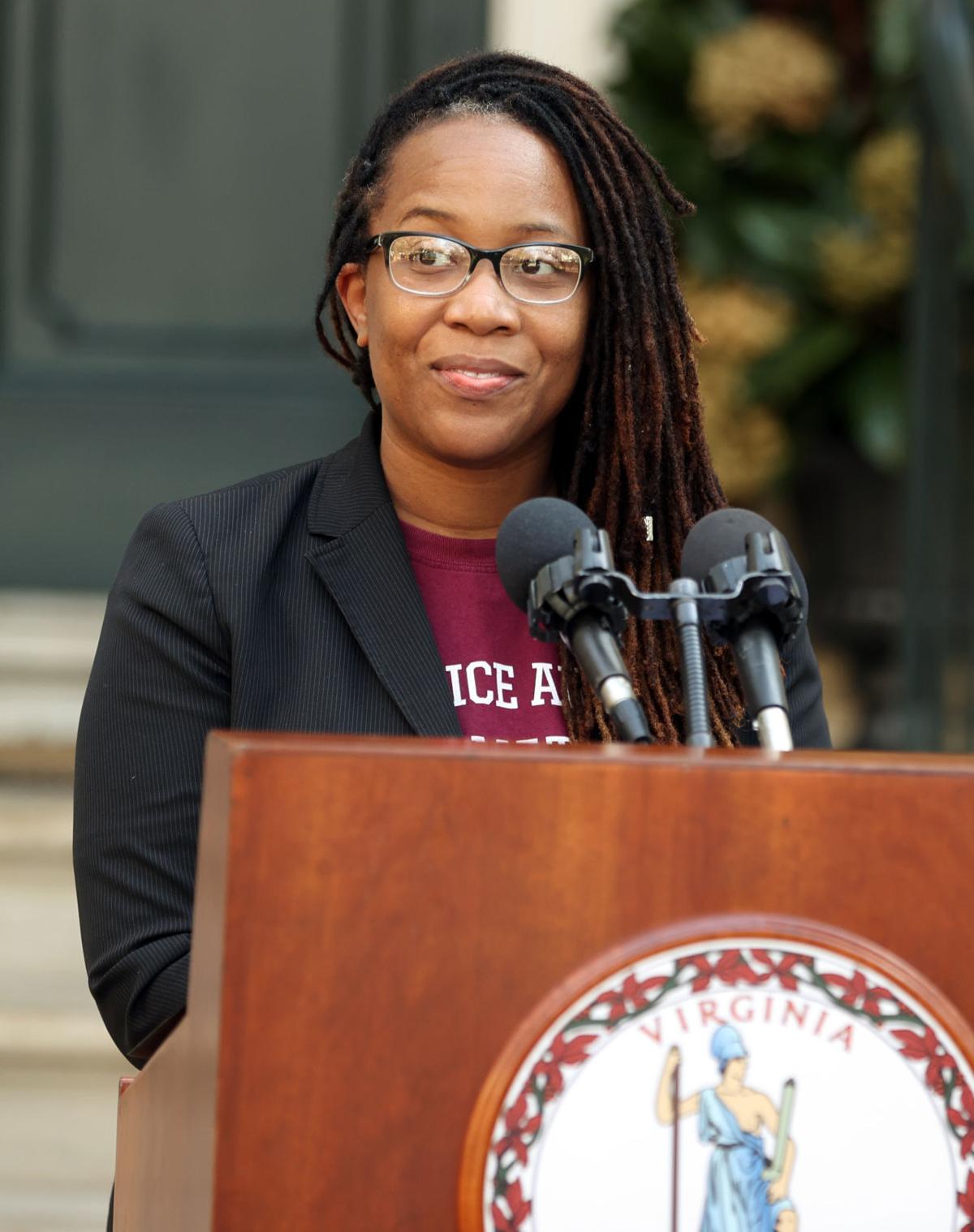 Princess Blanding, the sister of Marcus-David Peters, says the mental health alert named for her brother does not go far enough. 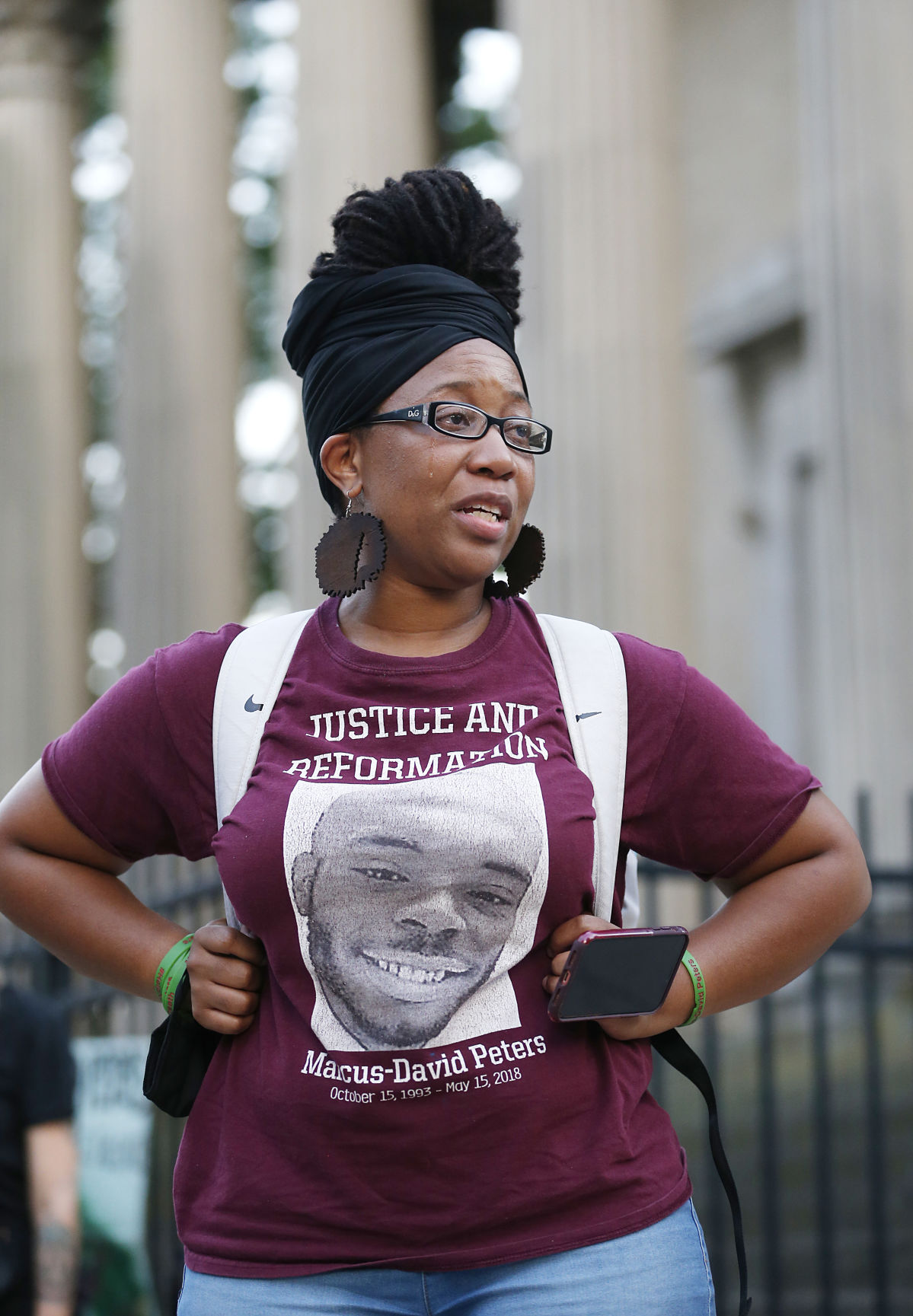 Princess Blanding, sister of Marcus-David Peters, said in July that localities must be required to have an emergency mental health response. She spoke

Princess Blanding, the sister of Marcus-David Peters, who was fatally shot by Richmond police in May 2018, has officially announced a third-party bid for governor of Virginia.

Blanding launched her campaign Tuesday in a news release and video, embarking on a candidacy under the banner of the newly formed Liberation Party that will emphasize public safety and racial and economic justice, among other progressive reforms.

In the wake of her brother’s death, Blanding founded Justice and Reformation, a grassroots organization advocating for mental health care and accountability in policing. Most of the group’s efforts centered in Richmond, but this year Blanding worked closely with members of the General Assembly to propose legislation like the “Marcus Alert” that establishes a statewide response system for those experiencing mental health crises.

The legislation ultimately fell short of what she’d hoped for, an example of how Blanding says the two-party system has failed to produce real reform.

Peters was killed May 14, 2018, as he charged at a Richmond police officer. Peters was unarmed, undressed and suffering a mental breakdown — his first, Blanding has said. The shooting was deemed justified by two Richmond commonwealth’s attorneys: Michael Herring, who held the position at the time, and the city’s current top prosecutor, Colette McEachin, who re-examined the case recently.

Blanding said in an interview Tuesday that her efforts have thus far focused heavily on public safety and criminal justice.

“But moving up and standing to run in a position that is statewide, it has to be more inclusive of the 360 [degree] concerns and needs of the people of the commonwealth,” Blanding said, adding that her platform includes policies on education, environmental justice and food sovereignty, health care and COVID-19 issues, labor, housing and gender rights.

“As a citizen, as a mother, as an educator, all of those policy stances round off, pretty well, the holistic needs and concerns of the people.”

The Middlesex County resident is a teacher in Northern Virginia, and the single mother of three daughters. She’s worked in education for 13 years and was an administrator at Essex High School, where her brother taught biology. She resigned shortly after his death, saying “it became emotionally draining to go back into that building and not see him.”

This summer’s civil unrest, which began in Richmond and across the nation in May after Minneapolis police killed George Floyd, inspired her statewide run, Blanding said.

“For me, I think that that turning point came this summer during the Richmond uprising, which played a part in the special session,” she said. She worked with lawmakers not only on the Marcus Alert, but also a law that established civilian review boards for police departments across the state, and a measure that sought to end qualified immunity for law enforcement, which was quickly killed by the legislature.

Blanding was unhappy with the final version of the law named for her brother, as well as the outcome of those other efforts. Earlier this month, at a news conference where Gov. Ralph Northam ceremonially signed the Marcus Alert law, Blanding denounced the measure as “watered down and ineffective” and the legislators who championed it as “part of the problem.”

“Even though we elect them on a state level to be the voices of the unheard, and to put people over profit and politics, they are part of the same system that keeps their knee on our neck while telling us to get up,” Blanding said Tuesday.

“You can’t be our oppressor and our savior at the same time. It’s gotten to the point that we have to move our fight from in the streets and our gripes among each other to elevating ourselves and others to be in some of these key positions to ensure that liberation for all of us is not a privilege, rather it is a human right.”

Blanding said she recognizes the challenge in running as a political outsider, and newcomer.

The recent high mark for a third-party candidate for governor of Virginia came in 2013. Libertarian Robert Sarvis received 6.5% of the vote in a contest in which Democrat Terry McAuliffe edged Republican Ken Cuccinelli.

“My previous experience is not as a politician, but it’s as an impacted citizen,” she said. “Coming from the ground up, coming from the trenches, I’m more adequately equipped to speak on behalf of and in the voices of the people.”

Among the candidates in the Democratic primary are: McAuliffe; former Del. Jennifer Carroll Foy, D-Prince William; Sen. Jennifer McClellan, D-Richmond; and Lt. Gov. Justin Fairfax. Del. Lee Carter, D-Manassas, has filed paperwork with the state to raise money for a gubernatorial campaign but has not formally announced a run.

Former House Speaker Kirk Cox, R-Colonial Heights, and state Sen. Amanda Chase, R-Chesterfield, are seeking the Republican nomination, which will be decided in a convention.

More hopefuls are expected to join the race seeking to succeed Northam, whose term expires in January 2022. Virginia is the only state in which governors may not serve consecutive terms.

Blanding will face an organizational challenge to get on the November ballot. She’s required to obtain 10,000 valid voter signatures, including at least 400 from each of Virginia’s 11 U.S. House districts.

Blanding said she sees this as an opportunity to get her name and platform in front of more people.

Princess Blanding, the sister of Marcus-David Peters, says the mental health alert named for her brother does not go far enough.

Princess Blanding, sister of Marcus-David Peters, said in July that localities must be required to have an emergency mental health response. She spoke