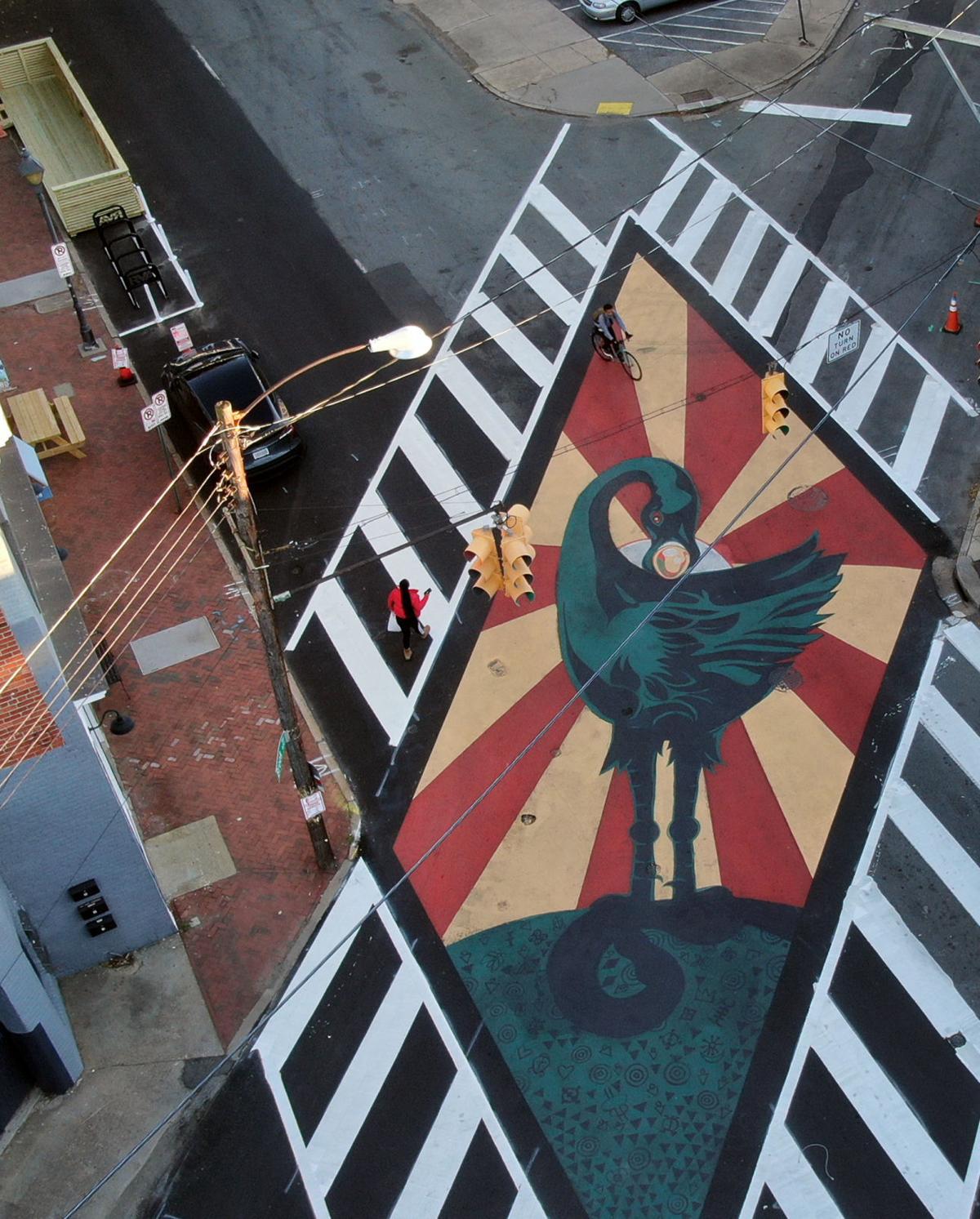 RIGHT: A custom-designed parklet (top left), sponsored by Art 180, and a mural designed by local artist Chris Vision have been added at the intersection of Brook Road and West Marshall Street in the Jackson Ward neighborhood of Richmond. 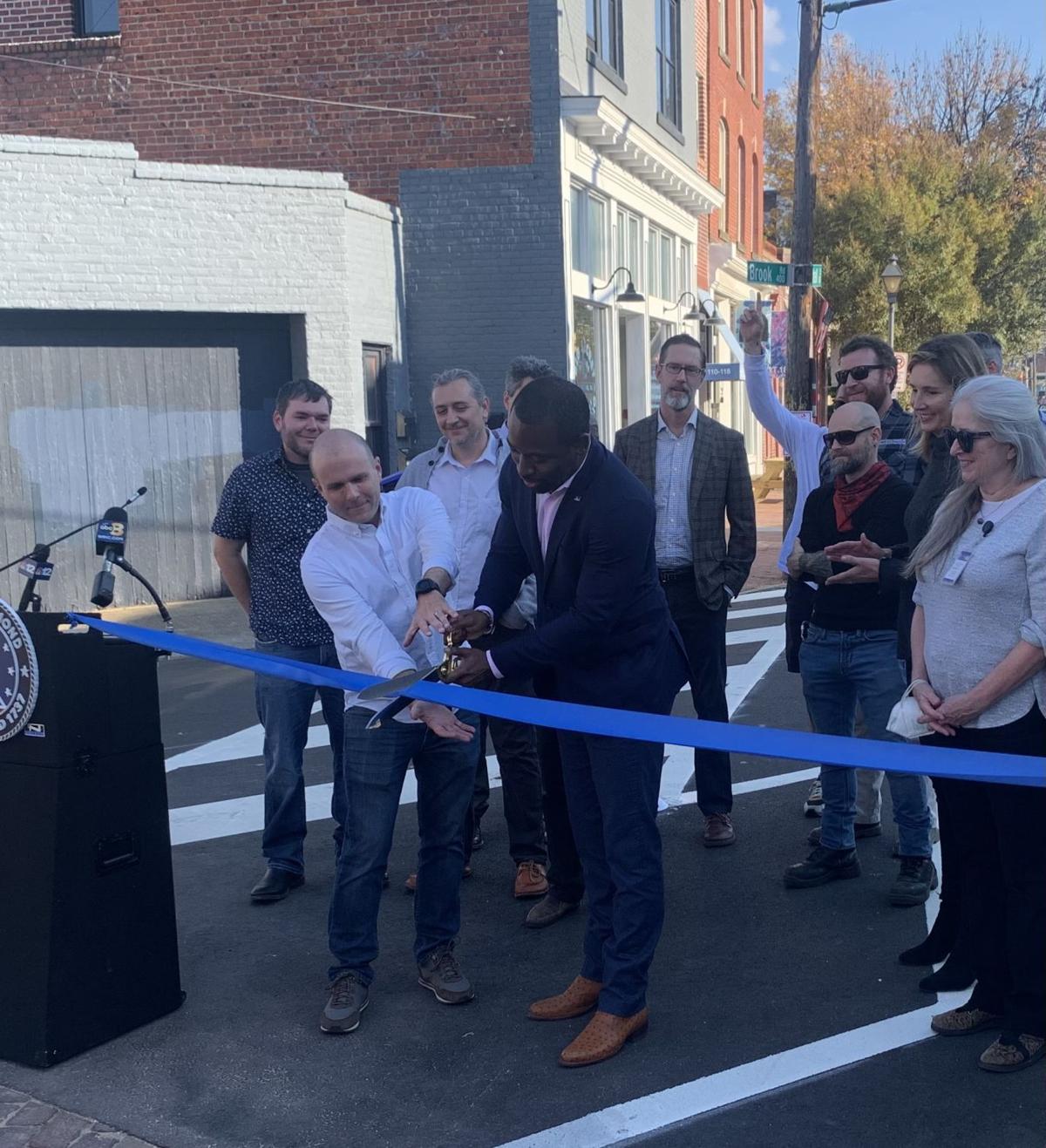 Richmond officials, urban planners and other community members gathered in Jackson Ward on Wednesday to commemorate the completion of a new street mural and on-street parklet.

The new mural — painted in the red, black and green of the Pan-African flag — is in front of Gallery 5 at the intersection of Brook Road and West Marshall Street. It’s part of a three-part community project that also includes a newly designed brick plaza in front of the art gallery and a raised on-street platform with bench seating in front of the nonprofit ART 180 studio.

“What a fitting symbol for the rebirth of this neighborhood and our city, especially as we start to emerge from a nearly two-year pandemic and continue to work toward bringing our city together and making it a more inclusive, welcoming and equitable place for everyone to live,” Richmond Mayor Levar Stoney said at a ribbon-cutting ceremony on Wednesday.

The so-called placemaking project wrapped up as community members celebrate the 150th anniversary of the historically Black Jackson Ward neighborhood and as city officials plan for the redevelopment of downtown Richmond.

“This is really the start of a western gateway to our soon-to-be reimagined and redeveloped city center,” said Kevin Vonck, director of the city’s Department of Planning and Development Review. “This is taking an area that wasn’t doing a whole lot. Now, it’s a space that can generate activity, energy and [tax] revenue.”

The bird-shaped design of the mural, created by local artist Chris Vision and painted by students in Art 180’s programs, is based on the Sankofa, an Andikra symbol from Ghana that represents “going back” or “retrieving.” Stoney and others at the unveiling said the design is meant to pay tribute to Jackson Ward’s legacy as a cultural and economic bastion of the city’s African American community.

The parklet, sponsored by Art 180, is a public amenity, meaning that anyone can sit and relax there, but city officials said that the nonprofit also plans to use it as place for kids in its youth programs to gather before and after classes.

The approximately $40,000 project was shepherded over the past two years by the nonprofit Venture Richmond and a $25,000 grant from Bloomberg Philanthropies.

Venture Richmond and the city’s Public Art Commission covered most of the remaining costs to pay the artist, material costs and other expenses, while architectural firm Walter Parks Architects designed the parklet for free, according to Max Hepp-Buchanan, director of riverfront and downtown placemaking for Venture Richmond and a member of the city’s Planning Commission.

“By working together and bringing everything we have to offer to the table, we have created a sense of place through lasting infrastructure change that everyone in the neighborhood can enjoy,” he said.

The parklet concept has been heavily supported in recent years by Venture Richmond and a cohort of local urbanists who say it helps make neighborhoods more livable and pedestrian-friendly.

Five parklets currently stand in Richmond. The new parklet in Jackson Ward is the first privately sponsored parklet to rise.

The city initially purchased and installed five prefabricated parklets earlier this year in partnership with several businesses, including Nile Ethiopian Cafe in Church Hill and Stir Crazy in North Side. The city also placed a parklet in front of Joe’s Inn in the Fan, but it was removed after the restaurant’s owner lost interest in sponsoring it.

Lars Reisinger, a general manager for the restaurant, said it was temporarily removed for a road-paving project. He said the business did not ask for it back after deciding it would be better to restore the parking spaces there. He said guests waiting for a table inside would sometimes lounge in the parklet, but that people rarely ate takeout on it.

“It didn’t fit our needs. We couldn’t serve people out there. You can’t drink on the parklets,” Reisinger said. “I think parklets are great. I just don’t think they’re good for a full-service restaurant.”

Parklets have yet to catch on widely.

Five years after launching the parklet program, the city has approved only two privately sponsored parklets.

Some businesses and property owners dislike the inability to control them, since they are deemed public space under city code. Restaurants that sponsor parklets, for example, can’t sit and serve people in a parklet since they are public space rather than an extension of a private business.

It also costs at least $10,000, which creates a financial barrier for anyone interested in applying to build a parklet, Vonck said in an email.

Department of Public Works Director Bobby Vincent earlier this fall paused plans for a parklet on Brookland Park Boulevard in front of Ms. Bee’s Juice Bar after several people complained to 3rd District Councilwoman Ann-Frances Lambert about how it would take away on-street parking in the busy commercial strip.

Vincent and Lambert said in a community meeting this fall that they also worry that having a parklet there would attract more homeless people and lead to criminal activity, such as prostitution and drug dealing.

Vincent said Tuesday that he is not concerned about such issues at the new parklet in Jackson Ward.

“We certainly are in favor of having parklets located throughout the city of Richmond, but we do want to make certain that when we have them installed in the right parts of the city ... where people welcome them,” he said. “Not everyone wants a parklet in their neighborhood.”

Ms. Bee’s owner, Brandi Battle-Brown, said Lambert and other community members have continued discussing compromises so that her parklet can rise. She said Lambert and others have proposed allowing a smaller parklet for a six-month trial period, but she’s still frustrated that Lambert blocked the project right as construction on it was wrapping up.

While some businesses say the lack of control is a deal breaker, city planning officials are developing plans to make the concept more appealing.

Vonck said his team is working with the public works department to draft new legislation that would allow businesses to build “streateries,” or an outdoor dining space within a public street. Unlike a parklet, he said, a streatery would not be a public space, and allow for restaurants to expand their dining rooms into “rented parking spaces.”

He said the goal is to introduce the legislation soon so that the City Council can consider its adoption within the next few months.

RIGHT: A custom-designed parklet (top left), sponsored by Art 180, and a mural designed by local artist Chris Vision have been added at the intersection of Brook Road and West Marshall Street in the Jackson Ward neighborhood of Richmond.