The trial to determine the fate of the Robert E. Lee statue on Monument Avenue was held Monday in a Richmond courtroom, and it became a wide-ranging discussion on the causes of the Civil War and race relations for the past 160 years.

Gov. Ralph Northam called for the 130-year-old statue to be dismantled June 4, but a lawsuit seeks to keep it standing. Circuit Judge W. Reilly Marchant said he expects to issue his ruling in seven to 10 days.

The proceedings started Monday morning, lasted most of the day, and included arguments from both sides and the testimony of four witnesses.

At the crux of the plaintiffs’ claim are deeds that were signed in 1887 and 1890 that required the monument to be held “perpetually sacred” and protected by the state. Patrick McSweeney, a lawyer for the plaintiffs, called Northam’s order to take down the statue unconstitutional.

Toby Heytens, solicitor general for Virginia, argued for the defense that a contract signed 130 years ago has no legally binding obligations on the governor and that a state can’t contract away its sovereignty. Private parties can’t use the courts to force the leader of a state to display a message it doesn’t want to display.

“The government is always allowed to change its mind,” Heytens said.

If you think the government wronged you, Heytens said, you have the right to sue for damages. But that isn’t what the plaintiffs — a group of residents who live close to the statue — are suing for. Instead, the plaintiffs are suing simply to keep the statue in its place.

“Our team did a strong and powerful job showing why the statue of Robert E. Lee should come down,” Attorney General Mark Herring told the media outside the courthouse following the trial. “Richmond and Virginia will be a better place when this statue comes down.”

McSweeney declined to address reporters outside the building.

The plaintiffs were dealt a potential blow last week when both houses of the General Assembly passed budget amendments that repeal an 1889 law that accepted the deed for the statue and agreed to protect it in perpetuity.

The General Assembly also appropriated the money needed to remove the statue. If the law that protected the covenant is gone, the plaintiffs have nothing to argue, Heytens said.

The move by the General Assembly could debilitate the plaintiffs’ suit, said Carl Tobias, law professor at the University of Richmond.

In the last year, the General Assembly has allowed localities to remove their Confederate statues and removed the Lee holiday from the calendar. That suggests further that public policy supports removing the statue, Heytens said.

McSweeney argued that the moves made by the General Assembly violate the Virginia Constitution because they interfere with pending litigation. He also said that restrictive covenants can be broken only if changes to them are so radical that the purpose of the agreement has been altered. He presented no evidence that residents would be financially damaged by the statue’s removal.

The defense called two historians to testify. The first was former University of Richmond President Edward Ayers, who said the point of erecting the statue was to valorize the Confederate cause. When it was built in 1890, whites in Virginia were reasserting their power, Black neighborhoods were segregated and Jim Crow laws were written to limit the freedom of African Americans.

“It was a display of uncompromised devotion to the Confederacy,” Ayers said.

Slavery, Ayers said, was at the heart of the cause of the Civil War. McSweeney pressed him, asking, didn’t Virginia secede only after Fort Sumter, S.C., was fired upon by Confederate forces? Yes, Ayers said, but slavery brought all the issues of secession to the forefront.

Testimony Monday went far beyond the statue and touched on slavery and 160 years of race relations in the United States. Marchant said the trial needed to “air out” these topics.

Kevin Gaines, a professor of civil rights and history at the University of Virginia, testified second and echoed Ayers’ thoughts. The message behind the statue’s construction was an affirmation of the continuation of the values that prevailed throughout the Jim Crow era, he said.

In many cases, he said, Confederate monuments are still symbols of hate today. When the discussion about taking down the Lee monument in Charlottesville began, a horde of white supremacists descended on the city to make a show of force and to lay claim.

While other Confederate statues were removed by city officials, the Lee statue, which rises 61 feet into the sky, remained because it was built on state land. In the months since George Floyd’s death in Minneapolis police custody, protesters have blanketed the statue’s base in graffiti and repurposed the space to commemorate oppression against Black individuals.

The injunction keeping the statue in place is set to expire next month. Marchant said he would rule before the expiration, so that the statue can’t be legally taken down before the suit is resolved.

When the number of observers in the courtroom became too high Monday, Marchant called for a recess, and four members of the media were removed from the room to create space as a COVID-19 precaution. Reporters watched the proceedings on a television in a separate room.

No matter what ruling Marchant makes next week, the losing side could appeal to the Virginia Supreme Court, Tobias said. The ultimate fate of the statue may not be settled before the end of the year.

A state panel charged with recommending a replacement for Virginia’s Robert E. Lee statue at the U.S. Capitol has set a Nov. 17 public hearing… 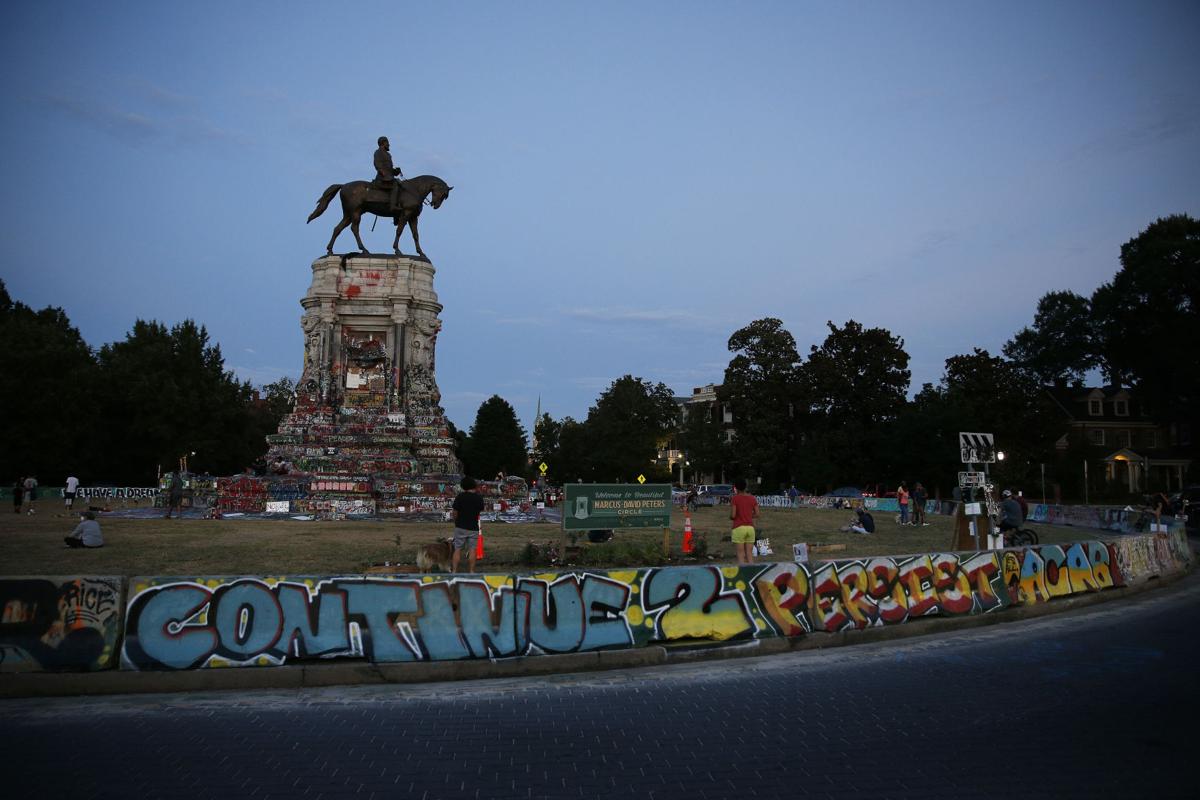 The statue of Confederate Gen. Robert E. Lee on Monument Avenue became a site of activism and protest over the summer. 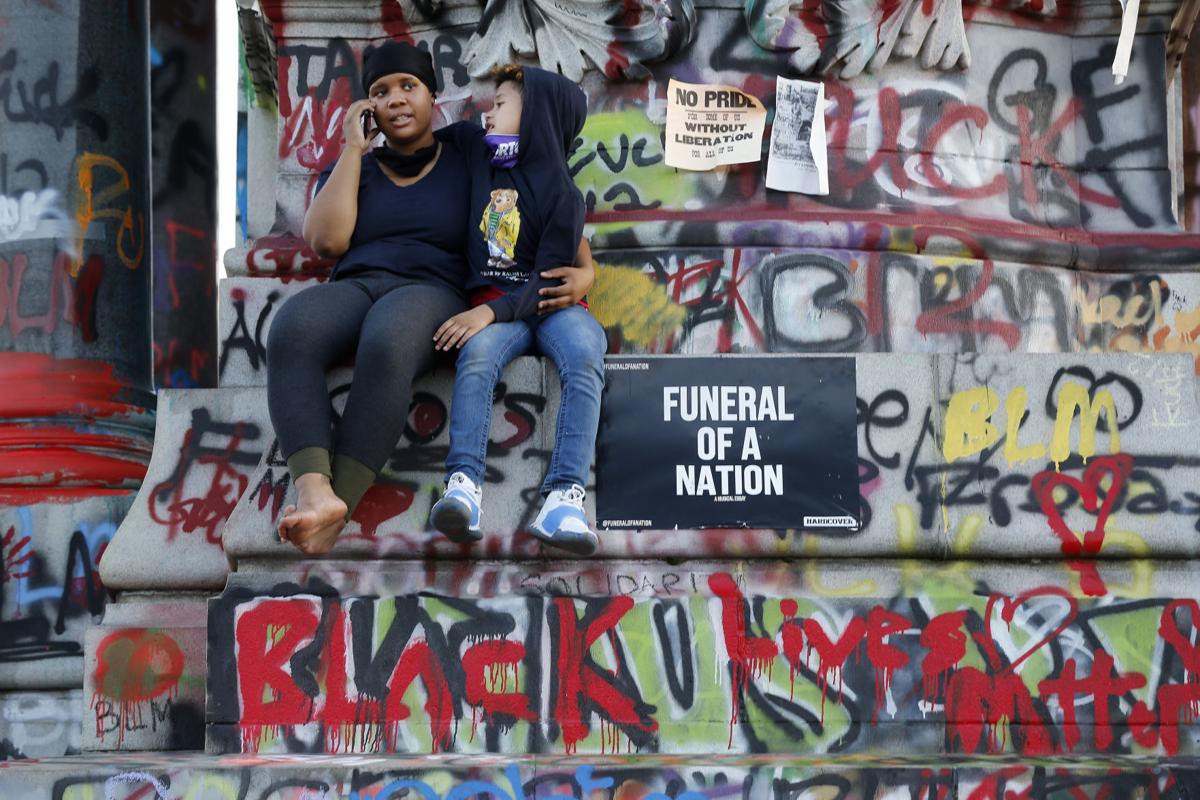 Visitors to the Robert E. Lee monument on Monument Avenue, after sunset.