Youngkin: All or nothing on energy, with regulatory reform

With local residents still divided over plans for Lee Circle, the Richmond Planning Commission on Monday delayed action on whether to adopt a temporary landscaping plan for the area that remains fenced off to the public.

Planning Commission Chairman Rodney Poole said the primary reason for the continuance is because another public panel, the Urban Design Committee, was unable to formally review the plan earlier this month because it did not have a quorum for its regularly scheduled meeting. Poole said he expects the committee will review the plan at a special meeting on Sept. 29.

“Hopefully they will be prepared to review this item ... based on the importance of the project and also because of the various staff comments on it,” he said. The commission did not discuss the topic further.

While Richmond planning staff has recommended that the commission approve the plans for small trees, shrubs and pathways where the statue of Robert E. Lee previously stood, some local residents have been critical of the plan.

Across 16 written comments publicly submitted by neighbors and local residents, the concerns range from the type of plantings being proposed, the city’s ability to maintain the landscape and how the area will be used after the state and city took down the statue of Lee and other Confederate monuments over the past two years.

“I believe that the design is inappropriate (and, in fact, detrimental) for several reasons. Most importantly, the proposed plan discourages people from gathering in and using the space,” said Don O’Keefe. “Any plan for Lee Circle, even a temporary one, should allow and encourage people to gather, discuss, express, and make use of their rights to speech and assembly in public space.”

Lee Circle and the graffiti-covered statue of its namesake became the focal point of protests and gatherings in 2020 following the police killing of George Floyd in Minneapolis. In addition to the protests, people placed community gardens, a makeshift basketball court and memorials to others killed by police in recent years.

The New York Times Style Magazine recognized the transformed statue as the most influential piece of American protest art since World War II. A few months later, however, the state placed a fence around the statue as legal challenges against its eventual removal last September were still pending.

The fence still remains, but city officials say it will be removed under the new landscaping plan. Representatives for Mayor Levar Stoney have said a comprehensive permanent plan for the site will be developed in consultation with the public, but have not yet formed a timeline for that process. 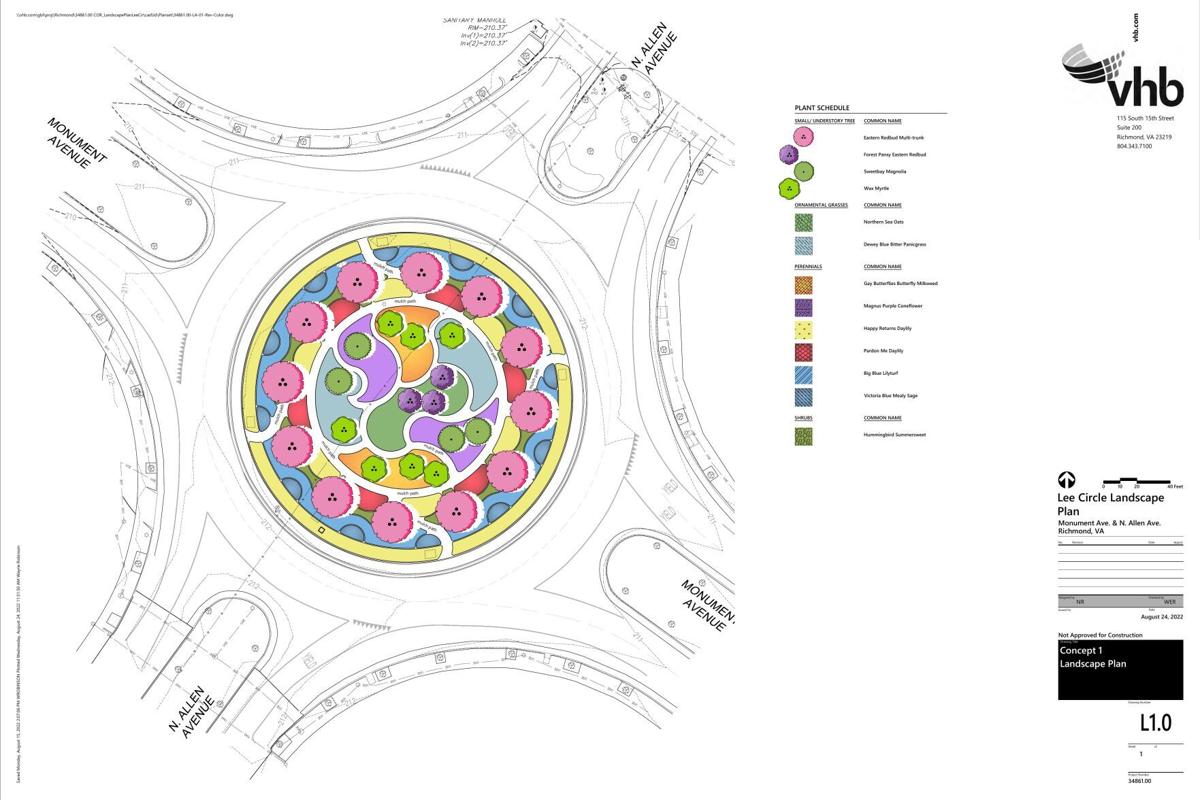 Though O’Keefe and others say the temporary landscape plan would discourage people from gathering at the site, others think it would do the opposite, and are concerned that it will lead to excessive noise, parking violations and other disturbances.

“Even though the circle was temporarily (and illegally) occupied by individuals for over a year during the recent social unrest, we think it is a HUGE mistake to make it attractive to pedestrians going forward,” said Steve and Janice Nuckolls, who both live near the site on Monument Avenue.

“We saw a huge uptick in criminal activity during this time in our historically-stable, quiet and safe residential neighborhood. Opening this up to pedestrians will likely attract an element wishing to start trouble, and we will be back to square one with a need for a security fence.”

The Planning Commission is expected to make the final decision on the landscape plan. If the Urban Design Committee reviews the plan later this month, the commission could vote on it as soon as its next meeting on Oct. 3.