UPDATED: Richmond City Council approves ban on guns during protests, other events
168 comments
Share this
1 of 3 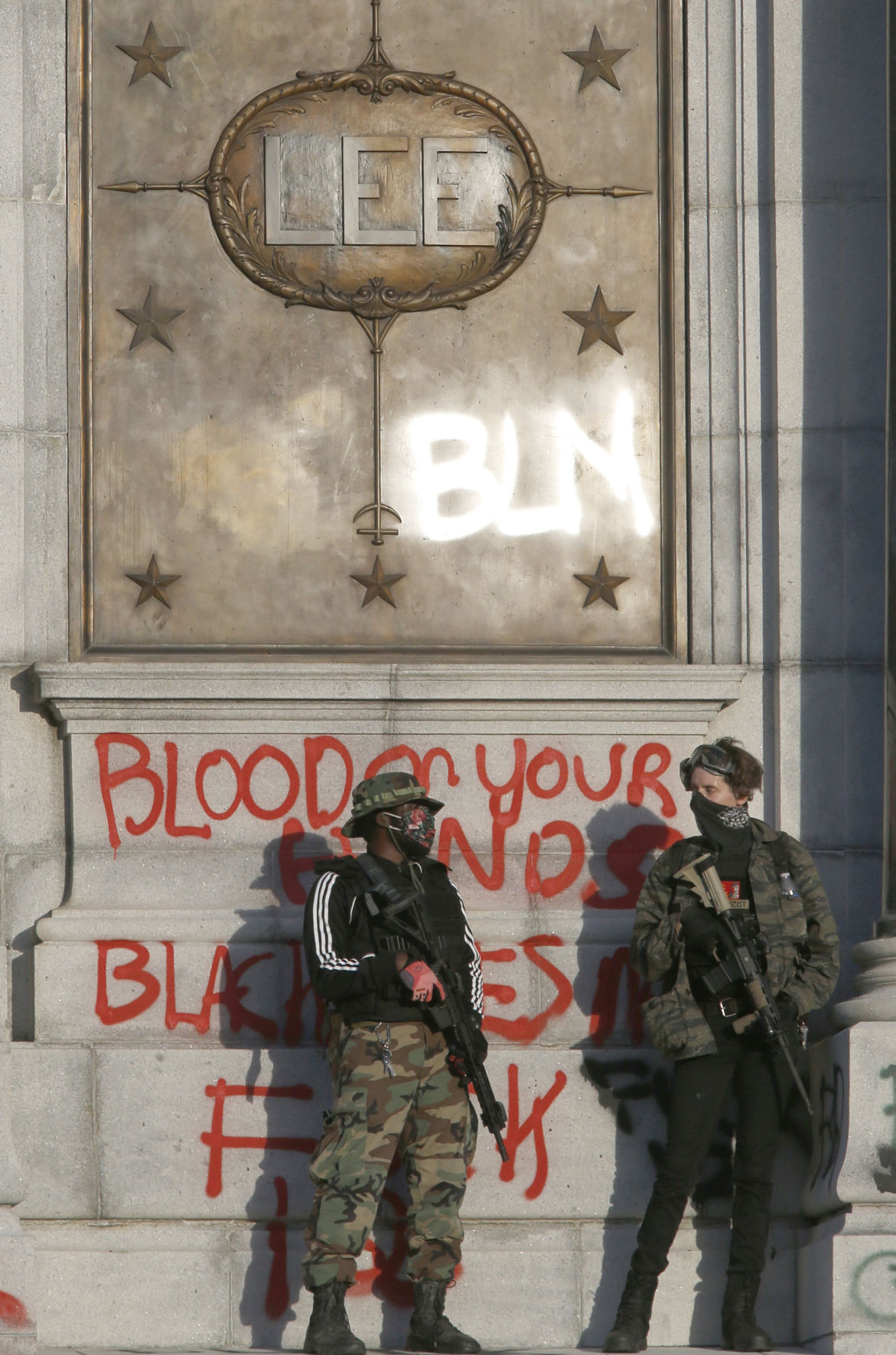 Two people with long guns stood on the side of the Robert E. Lee statue on Monument Avenue in Richmond during a protest on Monday, June 1, 2020.. 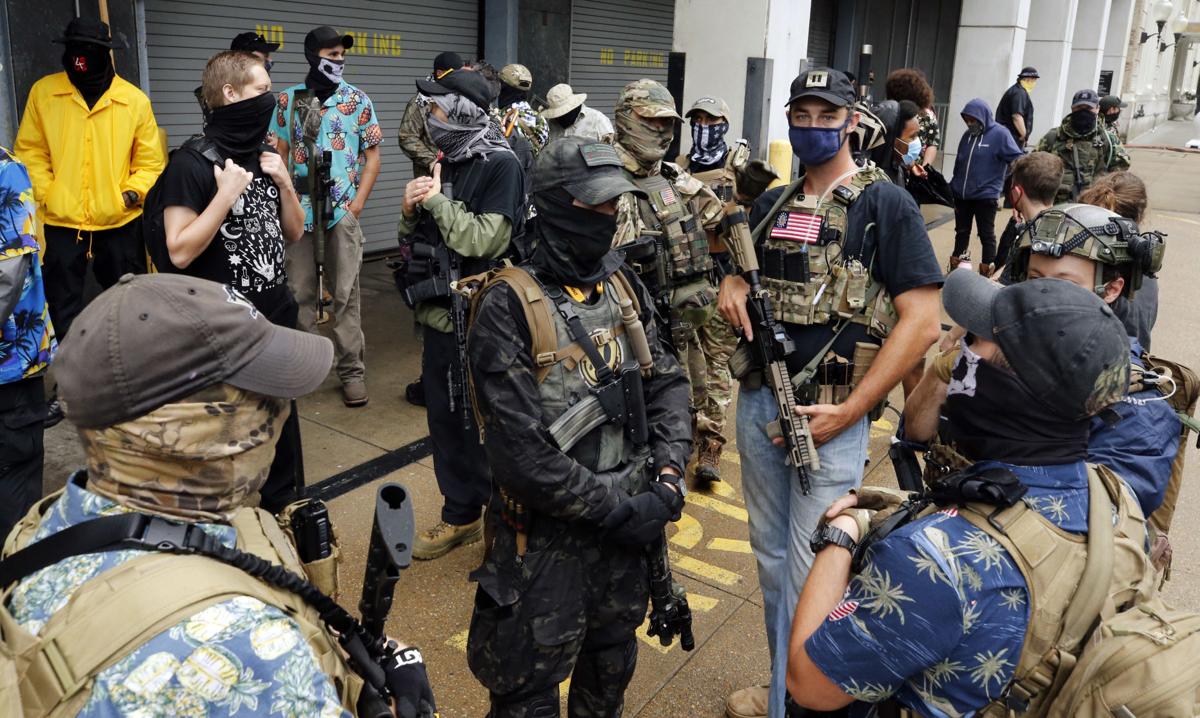 Gun advocates gathered for a rally Aug. 15 in Richmond. Mayor Levar Stoney pointed to recent demonstrations as examples of why the City Council needed to enact a gun ban for events in the city. 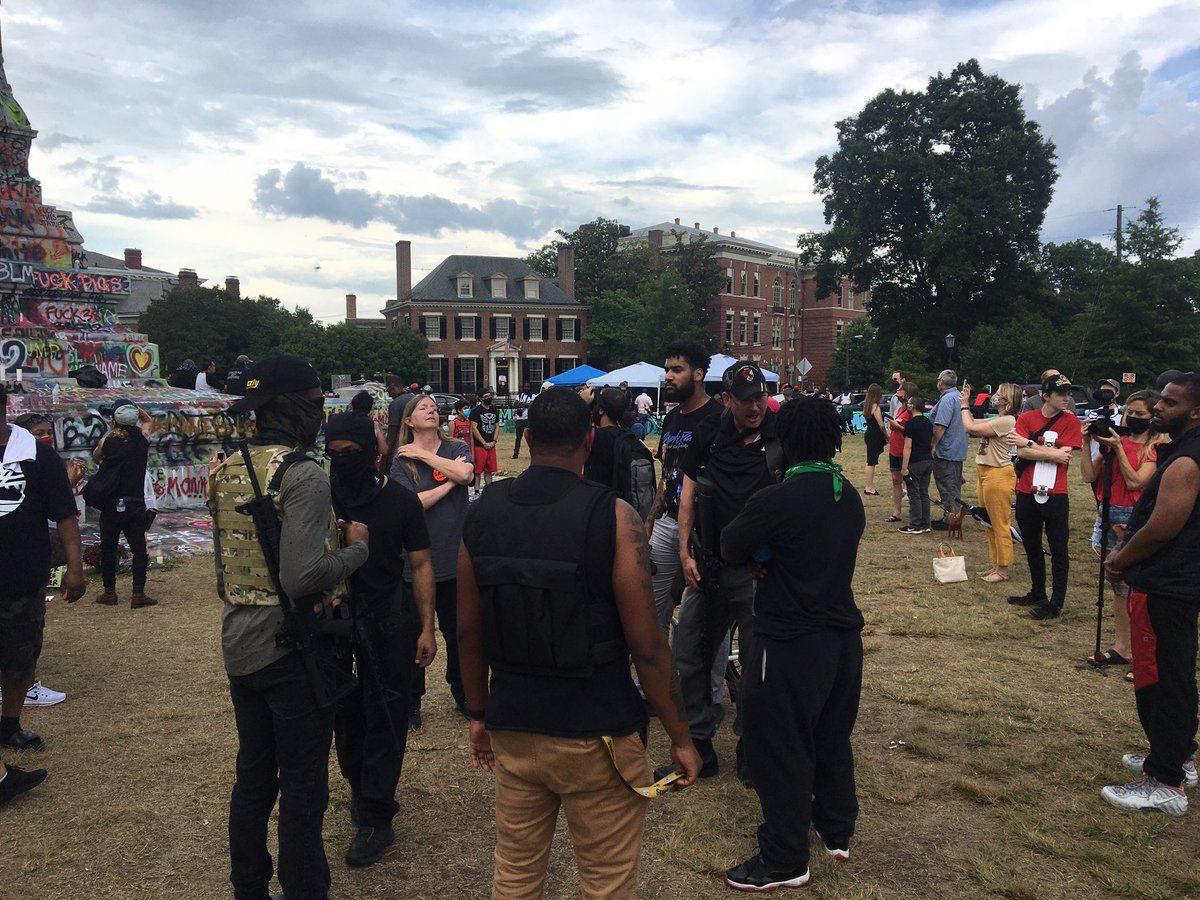 Members of Right to Bear Arms Virginia had a conversation with demonstrators at the Robert E. Lee monument in June. There were about 10 people with guns, along with one person with a sword.

The new law, approved Tuesday evening, bans the carrying of guns at any event, whether or not it is formally permitted by the city. The ban would also apply to any public area by an event, including streets, sidewalks, alleys and other public rights of way.

Proposed by Mayor Levar Stoney, the ordinance is intended to lower the risk of violent confrontation between protesters and police, or protesters and counterprotesters, as demonstrations against police violence and racial inequality continue across the country.

Last month, council members had delayed a decision on the proposal over concerns about enforcement.

In remarks to the council before Tuesday’s vote, Richmond Police Chief Gerald Smith noted recent events in Kenosha, Wis., where a 17-year-old fatally shot two people amid recent protests after video emerged of a police officer shooting a Black man in the back seven times. There also was a fatal shooting during recent protests in Portland, Ore.

“When you increase tensions with firearms, it’s just not a good mix,” Smith said. “Sooner or later, we are going to have different groups with different opinions who square off with each other. I believe this will be something we can use to increase safety in all of Richmond.”

While most of the protests in the city this summer were organized and held by people protesting racial injustice and police brutality, heavily armed demonstrators have also appeared around the state Capitol and other parts of the city during the General Assembly’s special session that started last month.

The new ordinance is based on legislation the General Assembly approved earlier this year to give localities more authority to ban guns in government buildings and public parks. Last year, anticipating the legislation’s passage, the City Council gave symbolic approval to Stoney’s proposal to ban guns in public parks and city buildings after a mass shooting in a Virginia Beach municipal building left 12 dead.

During Tuesday’s special council meeting, however, some council members continued to voice reservations about broadening the ban, expressing concern about how police would enforce the law. Several public speakers at the start of the meeting also questioned whether the ban infringes on their Second Amendment right to bear arms.

“I think it’s really weak. The way it’s written is not great,” said Councilwoman Kristen Larson, who raised concerns about enforcement of the ban in areas adjacent to an event.

Councilman Andreas Addison questioned whether protesters and activists would intentionally neglect obtaining an event permit, since the ordinance can be enforced only if signs notifying the public are posted at the event space.

The police chief, however, said law enforcement could post signs ahead of any events they learn of from flyers or social media posts promoting protests or rallies.

Addison suggested that enforcement of the ban would also be difficult in case of a dynamic march snaking its way through city streets. Smith said officers would seek compliance before taking any kind of action.

Despite the concerns and reservations, the council members agreed that it would be safest to keep guns away from protests.

Councilman Chris Hilbert said he also feels that the ordinance will help prevent armed counterprotesters from “abridging” the right of others to peacefully assemble.

“I will do everything I can legally to protect the First Amendment,” he said. “I believe this bill does that.”

Inside some of the world’s most unusual vaccination centers

Kathy Springston wasn’t sure she had heard correctly when Carla Torres-Barrera quoted her a new price for health insurance.

Two people with long guns stood on the side of the Robert E. Lee statue on Monument Avenue in Richmond during a protest on Monday, June 1, 2020..

Gun advocates gathered for a rally Aug. 15 in Richmond. Mayor Levar Stoney pointed to recent demonstrations as examples of why the City Council needed to enact a gun ban for events in the city.

Members of Right to Bear Arms Virginia had a conversation with demonstrators at the Robert E. Lee monument in June. There were about 10 people with guns, along with one person with a sword.