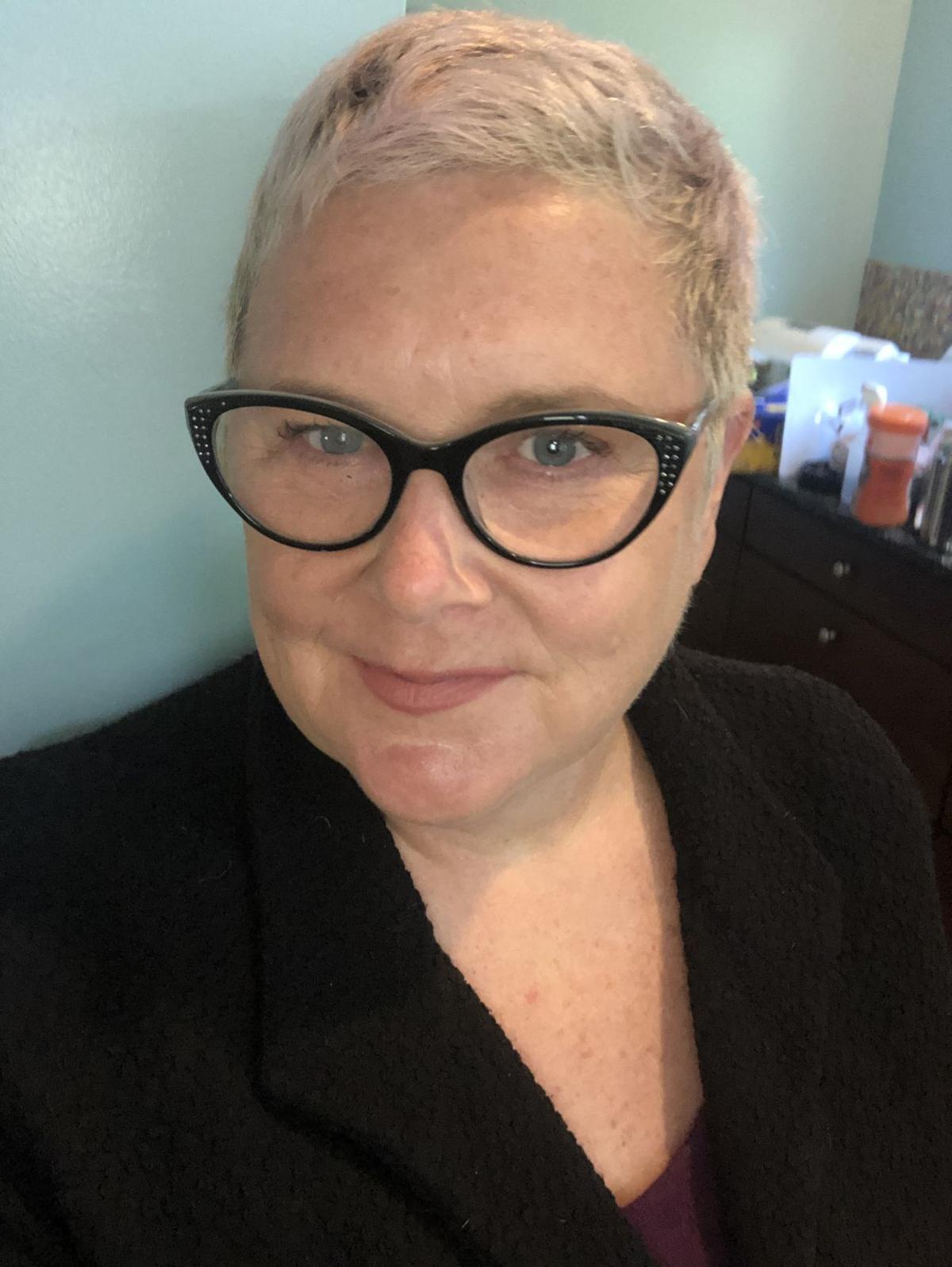 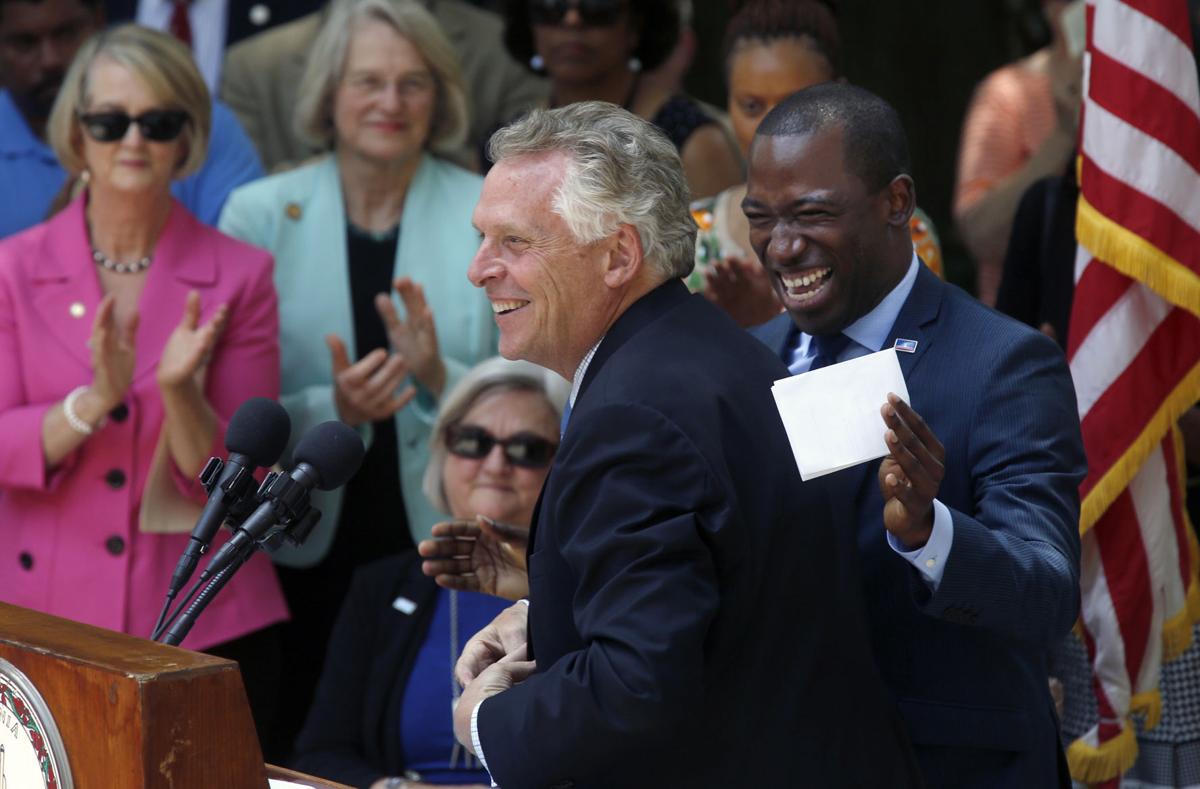 Virginia Governor Terry McAuliffe, center and Richmond Mayor Levar Stoneyshare a light moment before the unveiling of the Virginia Historical Highway Marker honoring the 50th anniversary of the Loving v. Virginia decision during a ceremony at 11th and Broad Streets in Richmond, VA Monday. June 12, 2017. In the background,are, from left, Julie V. Langan, Director, Department of Historic Resources, Del. Betsy Carr, D-Richmond, and Claire Guthrie Gastanaga, Executive Director of the ACLU of Virginia.

The stark inequalities in Colombia, racial and otherwise, “really helped formed my view of the world and informed kind of the way I thought of things after that,” recalled Bauer, a Hampton native. Back in the U.S., she felt compelled to seek out Spanish-speaking people.

“You can’t spend a lot of time talking to immigrants and not see injustice, because our system is largely built on white supremacy,” she said. Those conversations “set me on a path.”

She takes over a unit of the venerable organization at a pivotal moment. A recent New York Times article — headline: “Once a Bastion of Free Speech, the A.C.L.U. Faces an Identity Crisis” — describes a tug of war between the ACLU’s First Amendment roots and a movement toward more overt progressive activism.

“My view is that it has always been a tension and it’s a tension that we live with,” Bauer said during an interview Thursday, her eighth day on the job.

Sometimes, those issues are intersectional, as when that free speech work involves marginalized communities, she said; other times, the organization represents people whose views differ from it.

One example of the latter was the ACLU’s defense of the right of white supremacists to hold their August 2017 rally in downtown Charlottesville, where a neo-Nazi drove his car into a group of counterprotesters in the aftermath, murdering Heather Heyer.

Can the ACLU take such stances and retain progressive cred?

“Looking at Charlottesville and looking at January 6, we have to be keenly aware in our analysis of the role of violence,” said Bauer, who lives in Charlottesville, where she attended law school at the University of Virginia. “We can stand up for the right for people to speak, but we are not going to stand up for the right of people to engage in threatening and violent conduct.”

One issue that has become concerning to the ACLU is a concerted right-wing movement against teaching about systemic racism in education, an issue that has emerged in Chesterfield, Loudoun and Hanover counties.

“We strongly believe that students deserve to be taught the full history of this nation and the commonwealth, not just white history,” Bauer said. “The efforts to stifle and censor teachers’ speech before it happens is profoundly at odds with the core American value of free speech.”

Asked how the ACLU’s support of Confederate monument removal squared with its defense of free speech, Bauer cited the September removal of the “Johnny Reb” Confederate statue from the lawn of the Albemarle County Circuit Courthouse.

“That very statue, it is a monument to white supremacy and the message that it sent to people walking in to that courtroom is, ‘You might not get justice here because that’s not for you.’ So we have supported the removal of those statues because in our public communal space, we should not be choosing the side of white supremacy. The government should not be sending that message.”

Some folks had hoped that the Virginia ACLU would select a person of color as executive director. Bauer says she’s deeply grateful to have been hired, but “I am who I am ... a white woman.” Raising two adopted Black children, now teenagers, helps her better understand “the pervasive way racism shows up.”

She also recalled asking her son, then around 10, why he didn’t pull his jacket’s hood over his head during their cold-weather hike.

“He said, ‘Momma, you remember that boy who was killed?’ And I said, ‘You mean, Trayvon Martin?’ He said, ‘Yeah, I can’t wear a hoodie.’ And you know, that really shook me.”

Now that her son has his driver’s license, “Every time he goes out in a car, I have all of the feelings that parents of Black kids have,” she said.

“As much as I’m committed to issues theoretically or philosophically, my world experiences are just profoundly different.”

Bauer has a breadth of experience advocating for the marginalized, including stints as legal director for the Southern Poverty Law Center, legal counsel for Centro de los Derechos del Migrante, Inc., executive director of the Richmond-based Legal Aid Justice Center, and most recently, legal director for Muslim Advocates.

She also served as legal director of the ACLU of Virginia. She returns to an organization nearly four times larger than the six-person outfit she left in the 1990s.

The news release on her hiring says Bauer plans to bring to the organization “an expansion of the depth and breadth of its services.”

“I think we all see that Virginia, is at this really incredible moment in time, where really true deep change is possible. I mean, who would have thought that we would abolished the death penalty 10 years ago or legalize marijuana?” Bauer said.

“I see this as a moment to really go big and be bold and ask for the change that this commonwealth needs to create a truly fair and equitable state.”

Virginia Governor Terry McAuliffe, center and Richmond Mayor Levar Stoneyshare a light moment before the unveiling of the Virginia Historical Highway Marker honoring the 50th anniversary of the Loving v. Virginia decision during a ceremony at 11th and Broad Streets in Richmond, VA Monday. June 12, 2017. In the background,are, from left, Julie V. Langan, Director, Department of Historic Resources, Del. Betsy Carr, D-Richmond, and Claire Guthrie Gastanaga, Executive Director of the ACLU of Virginia.