© 2020 Lee Enterprises
Terms of Service | Privacy Policy
Williams: Black lives don't matter less now than in June. We must push past fatigue to give this moment lasting meaning.
101 comments
Share this
Return to homepage × 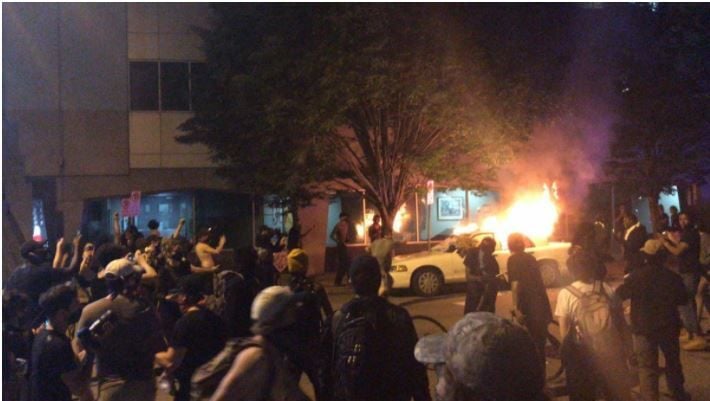 A protester screamed at police in Portland, Ore., on Saturday.

At least some of us feared that our spring of social justice would become the autumn of discontent.

We saw the vandalism and business property damage; the clashes between police and protesters. We heard restive Monument Avenue residents yearn for a return to normalcy. We’ve learned that Richmond fire officials estimated $3.9 million in fire damage during 18 days of civil unrest following the killing by Minneapolis police of George Floyd.

We watched President Donald Trump paint an apocalyptic portrait of U.S. cities as right-wing militias rallied on his behalf in Portland, Ore., and Kenosha, Wis., where the First and Second amendments collided with deadly results.

When surveys showed symptoms of an onset of protest fatigue, we were not surprised.

According to a recent POLITICO/Morning Consult poll, 52% of respondents expressed support for the Black Lives Matter movement, down from 61% in June. And in a recent survey by CNN, 55% of respondents considered racism a big problem in the U.S. — a substantial drop from the 67% who felt that way in June.

We can’t know how the emotions of the moment will affect this fall’s elections in Richmond, where Mayor Levar Stoney holds the advantages and disadvantages of incumbency, Councilwoman Kim Gray has positioned herself as a law-and-order alternative and Alexsis Rodgers looms as the choice of progressives.

It’s difficult to pin down the source of our weariness amid the pandemic. But September does not feel like June.

Dismantling systemic racism is an inherently messy task. But will vandalism and a pervasive sense of disorder undermine this movement?

Several weeks ago, I put the question to Adam Ewing, an associate professor in the department of African American Studies at Virginia Commonwealth University.

“In the short term it may erode support from some people, but in the long term I don’t think it is a serious concern,” Ewing said.

“Whenever a protest movement emerges, opponents seek to divert attention from the cause of the movement by focusing on the tactics of the protest. If vandalism isn’t the focus, it will be something else. Because what is threatening to people is not the vandalism but the challenge to the status quo that the protest represents.”

Since that interview, Jacob Blake was partially paralyzed by Kenosha police. Portland passed the century mark in daily BLM protests. And then came the early September release of those surveys.

Tuesday, I circled back to Ewing to see if he still believed what he told me in mid-August.

“I still do,” he said. “The overflow of violence that we see from the state and from defenders of the status quo seems to me to be a sign of weakness rather than strength, just like turning water hoses and dogs on nonviolent protesters was a sign of weakness during the ’60s.

“States demand a monopoly on violence, and they present their exercise of violence as a legitimate function of ‘order.’ When state violence is viewed as illegitimate on a wide scale, there is a real crisis.”

The question, he asked, is “do we maintain and expand our democratic practices, as the protests demand, or does the state retreat from democracy altogether? The current administration has proven again and again to be far more comfortable with the latter path than the former. Either way, it is hard to imagine how the status quo holds.”

Earlier, Ewing had reminded that King’s nonviolent protests were viewed as lawless and he was viewed as an enemy of the state by no less than J. Edgar Hoover, the longtime head of the FBI. And King’s protests, like today’s BLM demonstrations, were not uniformly nonviolent. The purpose of a protest is to make people uncomfortable — or in King’s case, to “bring the violence existing in the society to the surface for all to see and judge.”

In a nation with more firearms than people, why wouldn’t it come to this?

I wish I could share Ewing’s optimism, but experience as a Black man in America has taught me to wear wariness as armor. That pessimism can be blinding — I didn’t see us electing a Black president in my lifetime — but too often, it has been justified.

Yes, this moment feels different, when a city as white as Portland becomes a BLM epicenter. But what’s also different is a president willing to douse our incendiary electorate in accelerant to gain re-election.

We don’t have the luxury of impatience or discouragement. To quote the civil rights warrior Jesse Jackson, we must keep hope alive. There’s too much at stake to do otherwise.

Va. Parole Board dismisses calls to resign amid questions about Inspector General's authority to probe its decisions

Richmond Commonwealth's Attorney Colette McEachin said last week that she would not look into the matter. She said she thought there could be a perceived conflict of interest because the business executive tied to the shell company the city hired to take down the statues donated to her husband’s state Senate campaign in 2011.

The Richmond School Board on Monday voted 6-0 to allow the city to use five of its schools for emergency child care.

Our nation is experiencing crises of public health, mental health and racial inequality, and a crisis of confidence in law enforcement.

A protester screamed at police in Portland, Ore., on Saturday.