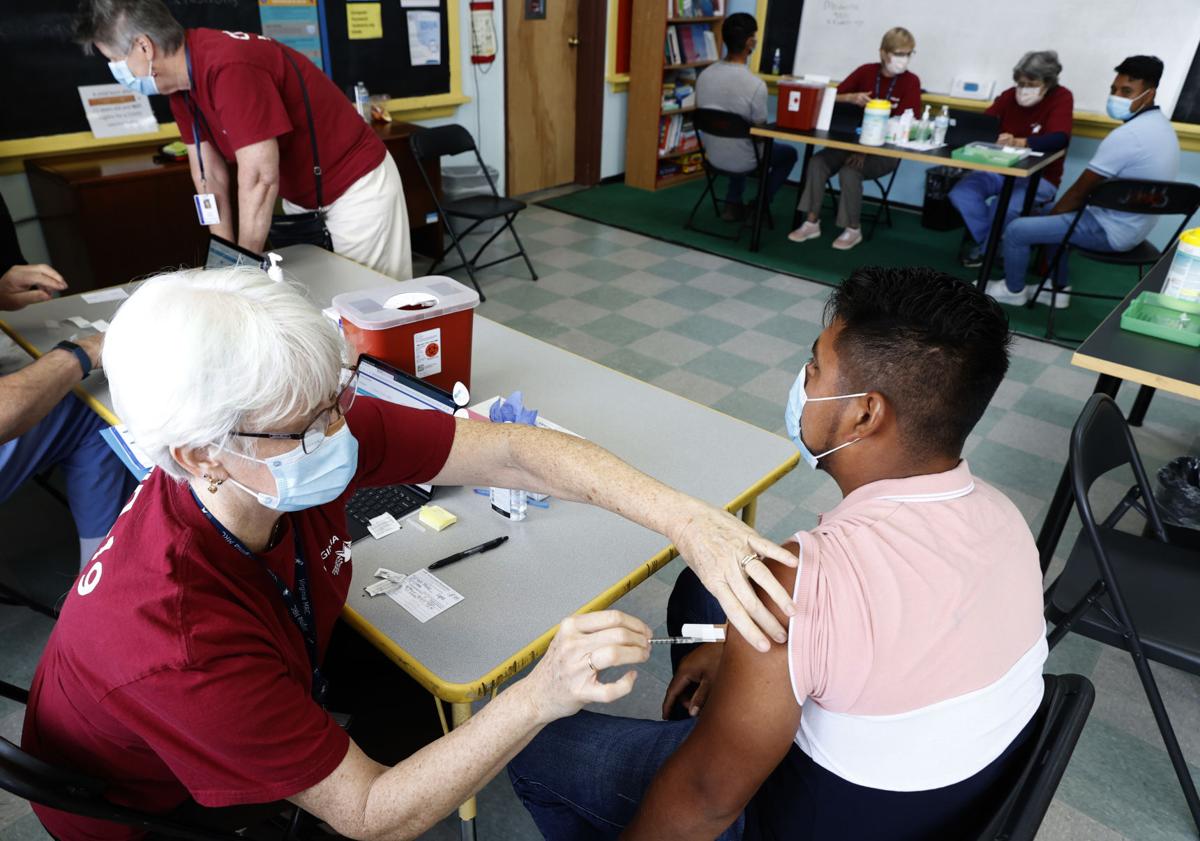 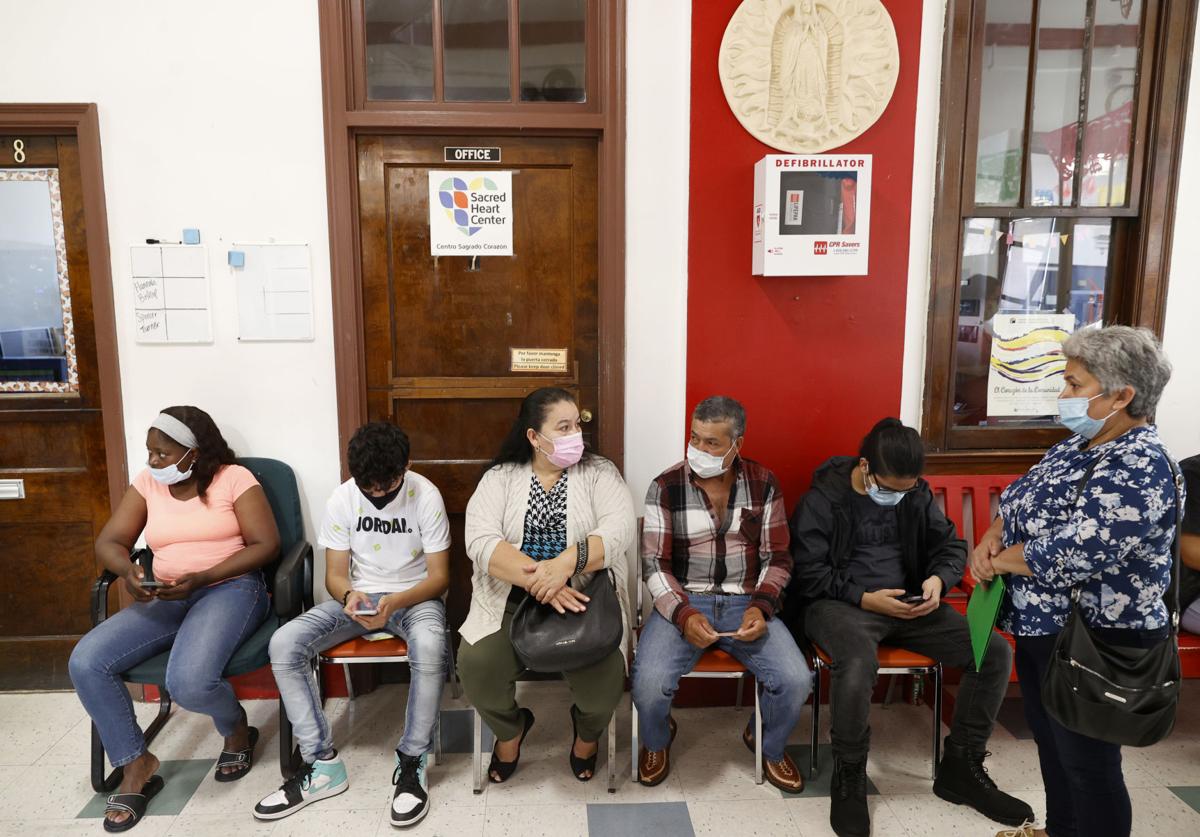 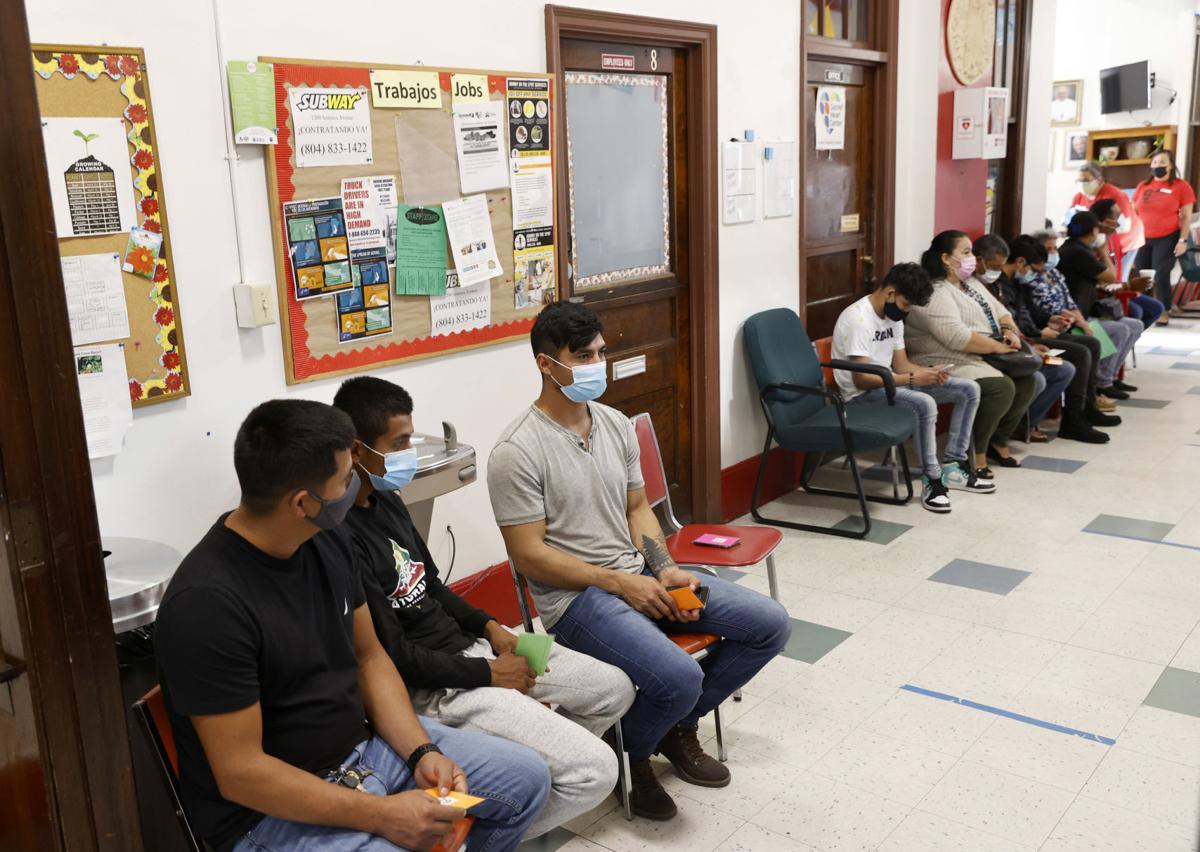 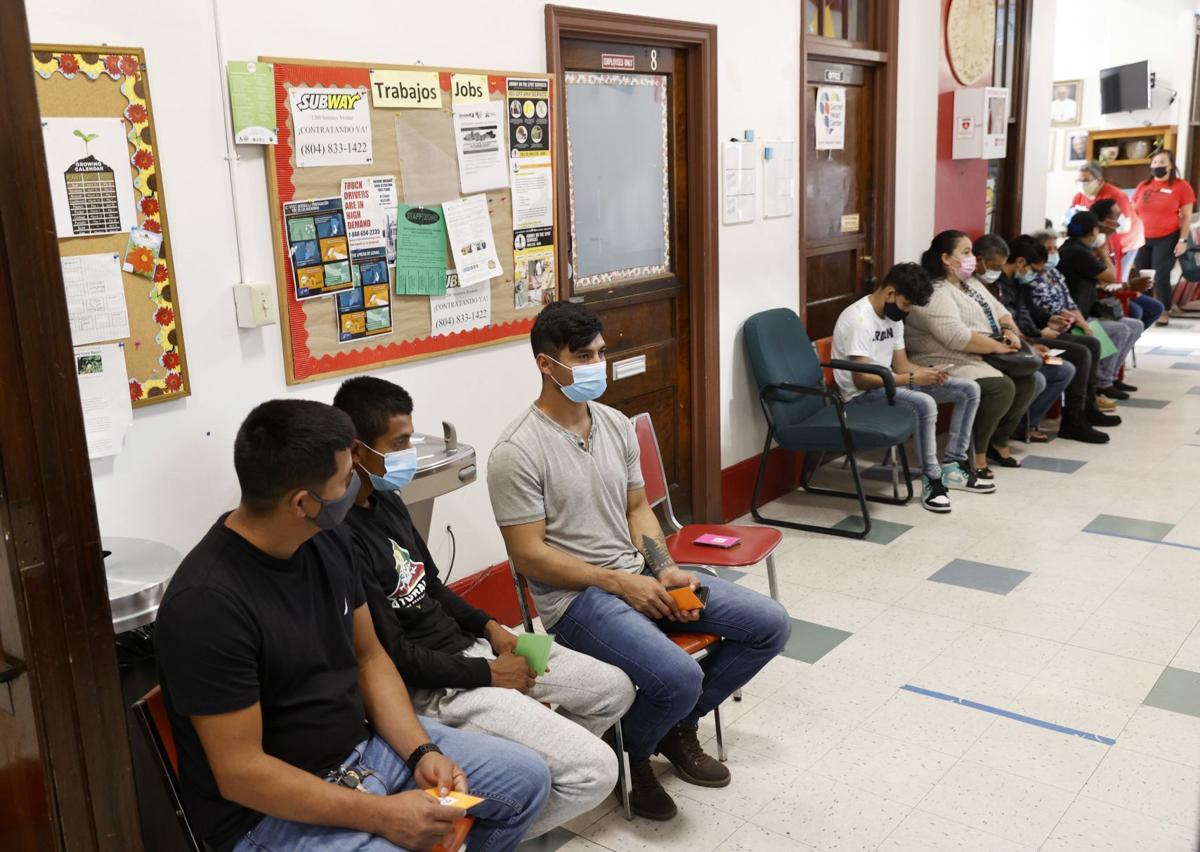 People waited to get COVID vaccines at Sacred Heart Center last month. The nonprofit was a crutch for Richmond-area Latinos when the coronavirus devastated their communities.

In the early days of the pandemic, the dry cough painfully tightened Lilian Andrade’s chest first. The fever was next, followed by lost wages and fear. Then when the COVID-19 symptoms subsided, the deaths began.

“So many young people,” she whispered in Spanish.

Her WhatsApp group chats with family back in Honduras pinged frequently with news of more dying. In Richmond, some were her neighbors. Others were family. A few were friends.

The past year and a half made enduring loss a routine part of living. Yet moments after her first Moderna shot at Sacred Heart Center — the nonprofit that was a crutch for her and thousands of Richmond-area Latinos when the virus devastated their communities — she felt triumphant. Safe. Cared for.

Eight months ago, those emotions seemed out of reach. Statewide, Latinos were the most likely to be infected, hospitalized or die from COVID as vaccine eligibility based on age largely shut them out.

Now, Latinos are the most-vaccinated group in Richmond and Henrico County.

“Gracias a Dios,” said Andrade, who is among the last of her friends and colleagues to get vaccinated, for no reason other than life got in the way and she wanted to get her physical first.

At 73% fully vaccinated, eligible Latinos across the city and county also exceed the state average — the result of grueling efforts to ensure accessibility by community organizations like Sacred Heart when the state had failed to.

Other incentives, made possible through donations, allowed each person who received a first or second dose at the center to get a $50 Walmart gift card for groceries and enter into a $200 raffle. A bag with food items, toilet paper, laundry detergent, shelf-stable milk and canned meats is compiled for each household. Free child care is provided on-site for parents, and family members are able to accompany individuals getting a shot for additional support.

This was not always allowed at larger vaccination clinics, which back in the winter, also required preregistration and an appointment made online — factors that Carolina Lugo, director of programs at Sacred Heart, said created additional barriers.

Between April 18 — when all Virginians became eligible, health districts shifted more to smaller clinics, and walk-in appointments were more widely available — and Saturday, the percentage of Latinos across the city and county who are vaccinated with at least one dose doubled to 80%.

Yet one of the most common reasons given for the delay in vaccinating Latinos during those early months was hesitancy, Lugo said.

“In my experience with some, not everyone, I have the sense that using the ‘hesitancy’ label has been almost a way of avoiding responsibility for not providing the service in a way that works for that community,” Lugo continued. “So if you can say that it’s their fault because we’ve done everything that we can, that does make a little bit of a difference.”

And the reality is, Lugo said, “you can’t become a trusted messenger overnight.”

Sacred Heart’s decadeslong investment into building relationships among Latinos in the Richmond area and having a completely bilingual staff — many of whom are immigrants themselves — positioned it to know what would work and what wouldn’t when vaccines arrived in December.

A vaccine event held during the week’s work hours? No.

“By that point, the mass vaccination clinics had really died down and that’s when the messaging around ‘Everybody who wants to be vaccinated has already been vaccinated’ [started],” Lugo said. “We were firmly in the stance of ‘No, they haven’t been reached.’ ”

They knew how to conduct the COVID outreach and education needed because they’ve been doing it since March 2020, the moment when Gonzalez sat at her kitchen table recording a Facebook Live video that would also air on Spanish radio — two primary avenues where Latinos were getting information at a time when little was in their language.

Back then, Gonzalez said, translations from both state and local authorities were taking days. The health departments, like they had throughout the pandemic, promised to figure it out.

But it took six months from when the rollout began for the first Sunday clinic to launch on July 13. The last was on Oct. 30.

Nearly 700 vaccinations were administered within that time frame, averaging about 100 per event — often the most of any Richmond and Henrico clinic at a point when mass vaccination sites were closing and vaccinations statewide were declining. Bon Secours Care-A-Van, which has shown up at the center on Friday mornings since February, has administered almost 3,000.

Local health officials have hailed Sacred Heart as a model for community-based vaccination events, but upcoming dates for clinics to vaccinate 5- to 11-year-olds or more agency-run events for administering booster shots at the center are not yet set. Saturday clinics for this age group at George Wythe High School start Saturday, and a vaccination site at the Arthur Ashe Center reopens Monday.

Andrade had come to one of the last clinics held in October, when a daily vaccination record was broken and more classrooms were made into makeshift waiting areas because of the morning rush.

There were people coming from Sunday Mass on the first floor. Kids who had recently turned 12 and become eligible. Workers ready to fulfill the vaccine requirement adopted by their employer.

And there was Lugo, being the first person anyone entering Sacred Heart saw or the one poking her head into classrooms to ask, “Todo bien?”

She ran from floor to floor, the go-to for logistics questions or language needs. Roughly seven or eight interpreters with the health districts or the Medical Reserve Corps were on site — with at least three in the registration room — but demand quickly outpaced availability.

When Andrade’s 15-minute waiting period was up, two MRC volunteers walked in to tell her and book her second vaccine appointment. Neither spoke Spanish. Andrade and the four other people in the room didn’t speak English.

So they peered into the hallway for an interpreter before turning to a Richmond Times-Dispatch reporter and asking, “Can you translate?”

When infection rates among Latinos in Richmond became so severe that the Centers for Disease Control and Prevention deployed its first all-Latino COVID response team to the city in May 2020, the federal agency noted the lack of sufficiently translated resources and bilingual staff made efforts ineffective — especially for a population with a lack of insurance and paid leave and little to no access to safety nets.

Eighteen months later, Richmond and Henrico’s health districts have invested $9,000 into translating materials and partnered with nonprofits to provide rent and utility relief. At the height of the COVID response, 40 of the 200 contractors the agency employed spoke Spanish. Of those, 16 were contact tracers or case investigators, according to officials.

Now, it’s about 15 to 20 full-time Spanish-speaking employees across Richmond and Henrico’s 180-person workforce.

Statewide, the Virginia Department of Health expanded its outreach team, using door-to-door campaigns and where infection rates were the highest to determine the locations of vaccine clinics — a model patterned after Fairfax County’s “long tradition of community outreach,” said Henry Murdaugh, acting director for the VDH’s Office of Health Equity.

Fairfax County is one of the few localities to have as high a vaccination rate among Latinos as Richmond and Henrico.

The VDH’s vaccine navigation team is also made up of multilingual speakers tasked with having one-on-one conversations with non-English-speaking communities, Murdaugh added, and an audit of the agency’s gaps in language access is underway.

That’s slated to be completed in December, one year into vaccinations and nearly two years since Virginia’s first case.

People waited to get COVID vaccines at Sacred Heart Center last month. The nonprofit was a crutch for Richmond-area Latinos when the coronavirus devastated their communities.