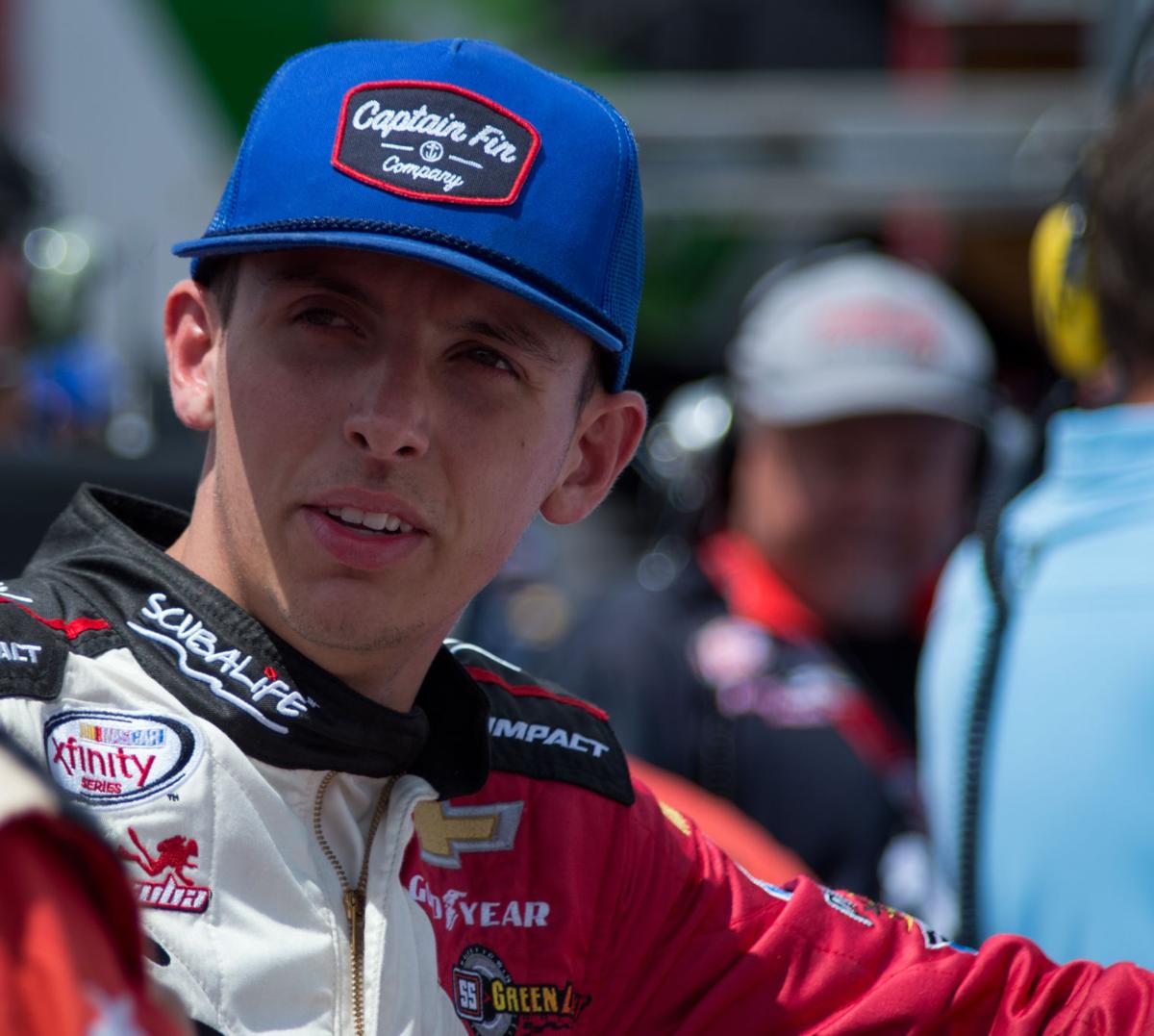 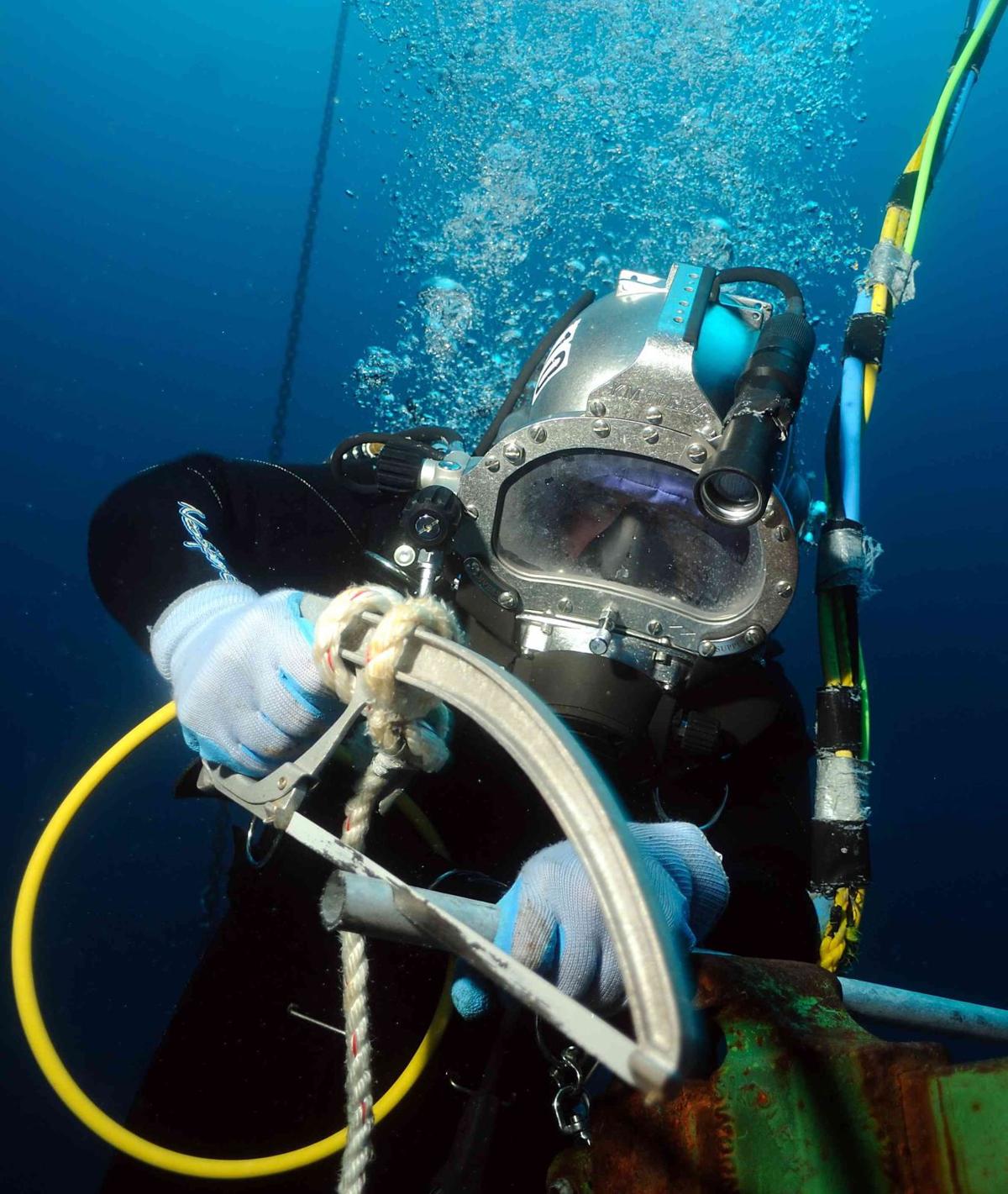 NASCAR XFINITY Series driver and hardhat diver Ray Black Jr. saws off the end of a pipe during a commercial salvage job.

MECHANICSVILLE – Ray Black Jr. loves two potentially dangerous sports. In one, you try to avoid doing anything fast. In the other, you try to do everything fast.

“They’re opposite there, but at the same time, they kind of go hand-in-hand in terms of the preparation and the measures you take,” Black said. “Before each dive, you’re looking over every chart and looking at your dive plan and going it two or three times to make sure your dive buddy knows everything – especially when you’re working in the water. … I just kind of took that to my racing.”

The 24-year-old – who began his NASCAR career in the Camping World Truck Series in 2014 before moving up to the XFINITY Series full time this year – began scuba diving when he was 11.

“I grew up diving – most of my life,” Black said. “That was always the kind of thing that kind of ran in my family, at least with my dad.”

Black’s father, Ray Black Sr., is a former military diver who founded the Commercial Diving Academy in Jacksonville, Florida, in 1995. When the younger Black turned 18, he joined his dad in the family business, doing jobs such as underwater construction, salvage, and environmental cleanups.

Black had no family background in auto racing. His interest was piqued by computer games and television instead. He eventually convinced his dad he was interested in racing, and the elder Black researched the racing scene in Florida as thoroughly as he would a dangerous dive job.

The younger Black is focused on racing right now, though he remains active in the diving world – even if he can no longer dive as frequently throughout the year with the long XFINITY Series season. For a diver, too long a break from diving can cause problems

“You get a little rusty, definitely,” Black said. “There are things that you just miss going right back to the diving world. You definitely have to be right on top of it getting back to [diving].”

Diving references are all over his car and gears. The team’s main sponsor is Scubalife.com. His father’s school, Commercial Diving Academy is another sponsor as is an affiliated dive certification organization, the National Academy of Scuba Instructors (NASE).

His diving experience – especially his commercial diving work – has given him a ready-made role in one of NASCAR’s big initiatives: the NASCAR Green program. He hopes that a growing stature in the racing world will help him become a voice for the oceans.

“I like the ocean a lot, obviously. I live on the beach,” Black said. “It would be cool to be an ambassador for the diving side of it, going green and things like that. If NASCAR would like to get into ocean [issues], I would like to take hold of that, be a spokesperson for it and given them some advice.”

Black hopes to have a long career in NASCAR, even if it interferes with his diving. But he hopes to stay in the diving world.

“Diving is a thing I want to have a long-term relationship with,” he said.

January 17, 2022: Check out A1 Minute NOW – Check out MLK events and volunteer opportunities at area universities; Free entrance to all national parks today; MLK Jr. Day of reading at Children’s Museum of Richmond

NASCAR XFINITY Series driver and hardhat diver Ray Black Jr. saws off the end of a pipe during a commercial salvage job.