© 2020 Lee Enterprises
Terms of Service | Privacy Policy
He taught teenagers all day Monday. That evening, he was shot by police responding to his bizarre behavior. His grieving family is trying to understand why.
41 comments
Share this
{{featured_button_text}}
1 of 5 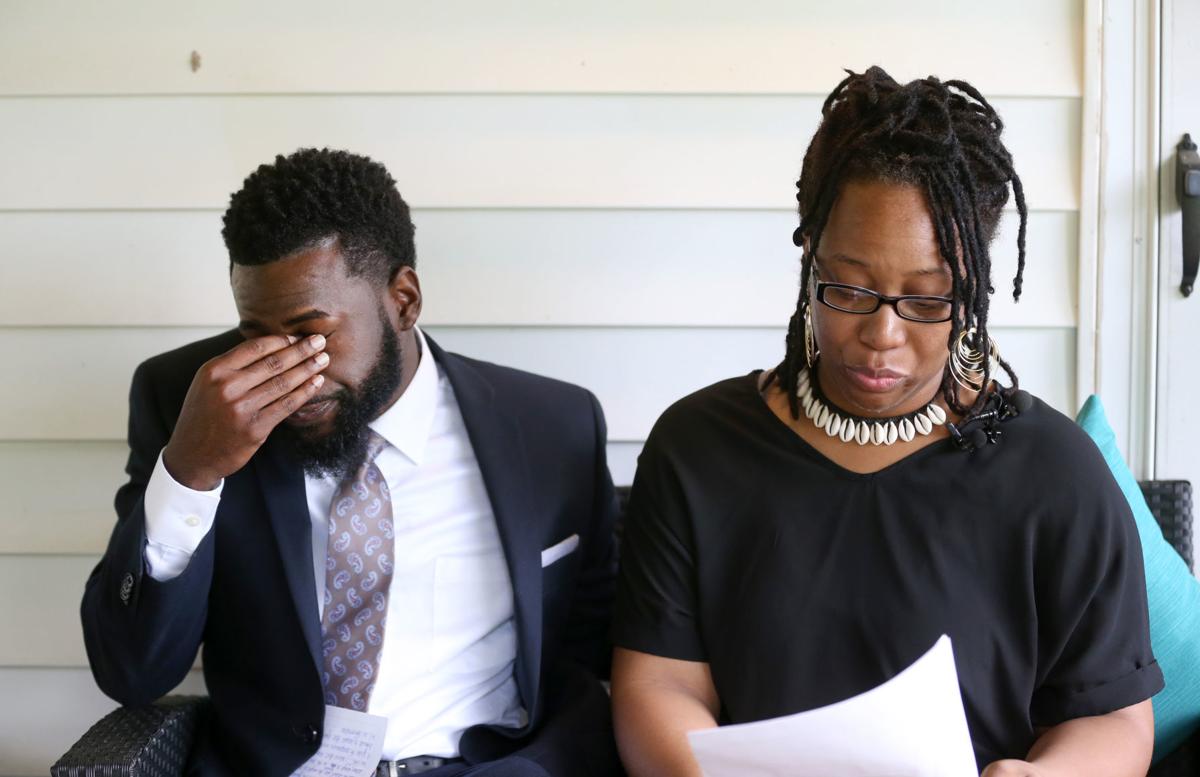 De’Geon Briggs (left), a cousin of Marcus-David Lamar Peters, and Princess Blanding, Peters’ sister, spoke Thursday about the death of their family member. 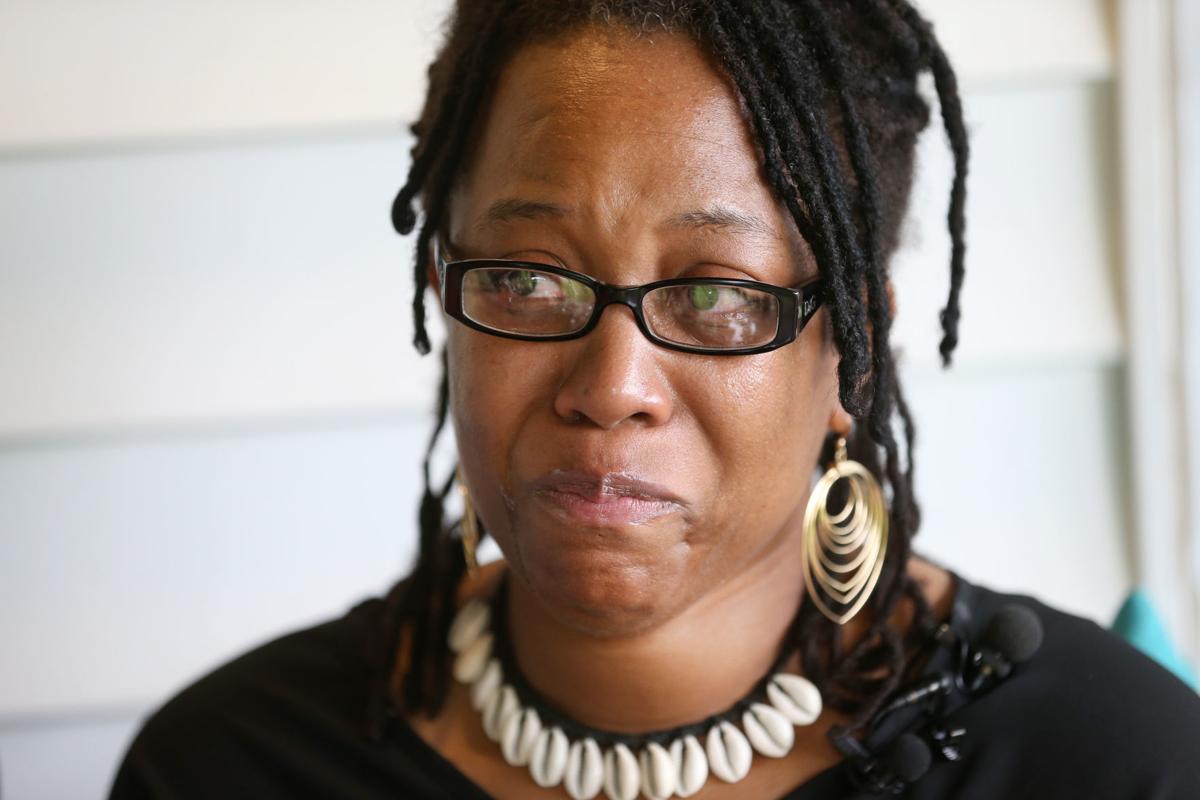 Princess Blanding, the sister of Marcus-David L. Peters, who was fatally shot along Interstate 95/64 on Monday, talks during a press conference on Thursday May 17, 2018. 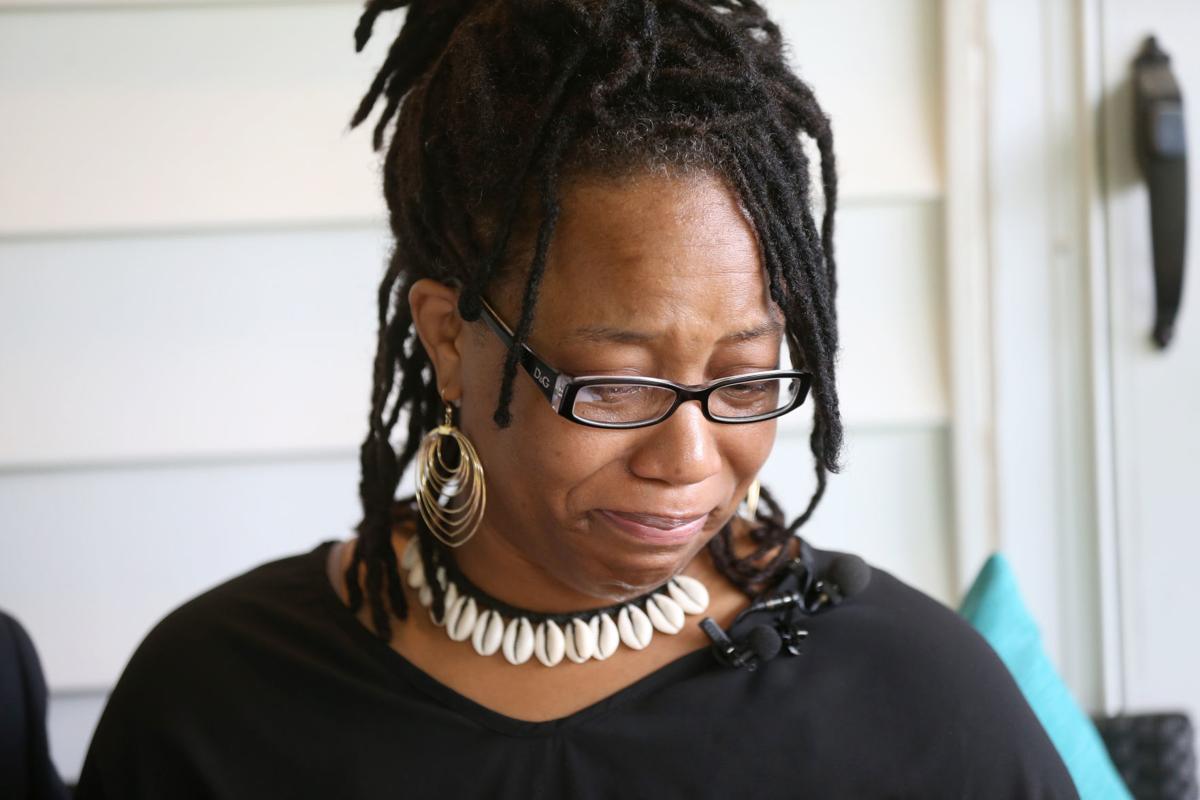 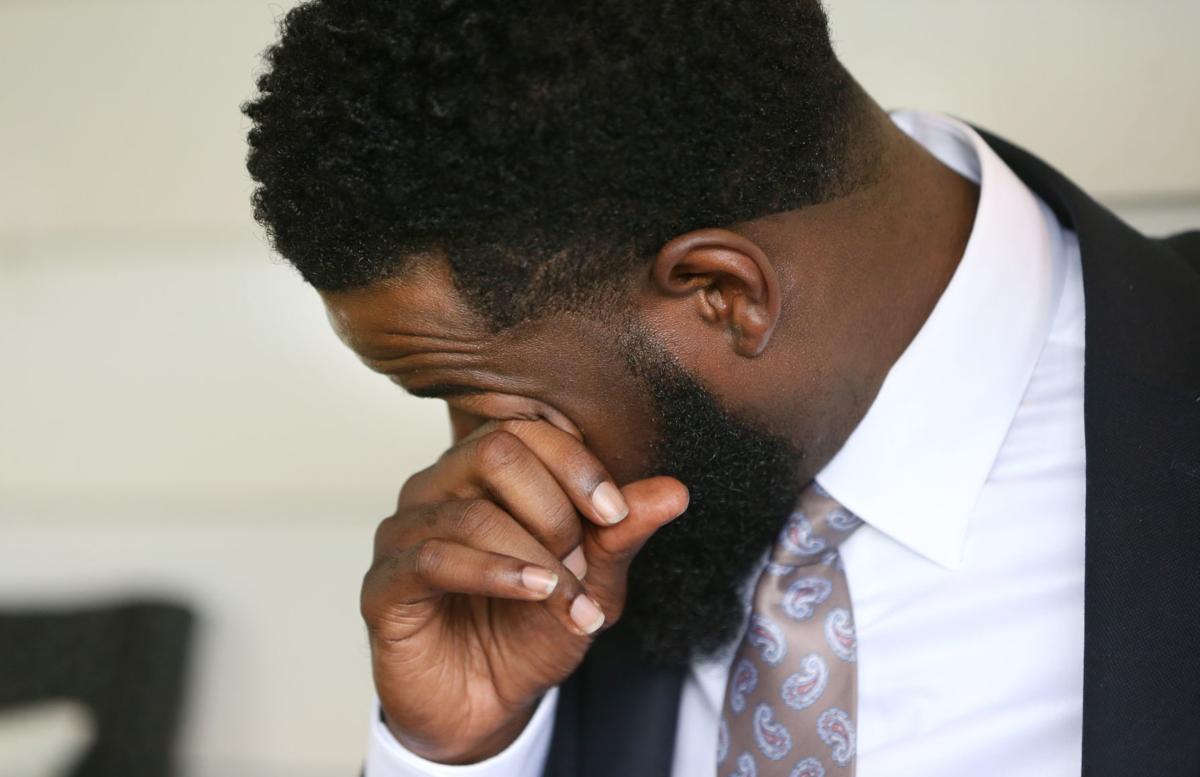 De'Geon Briggs, cousin of Marcus-David L. Peters, who was fatally shot along Interstate 95/64 on Monday, gets emotional during a press conference on Thursday May 17, 2018. 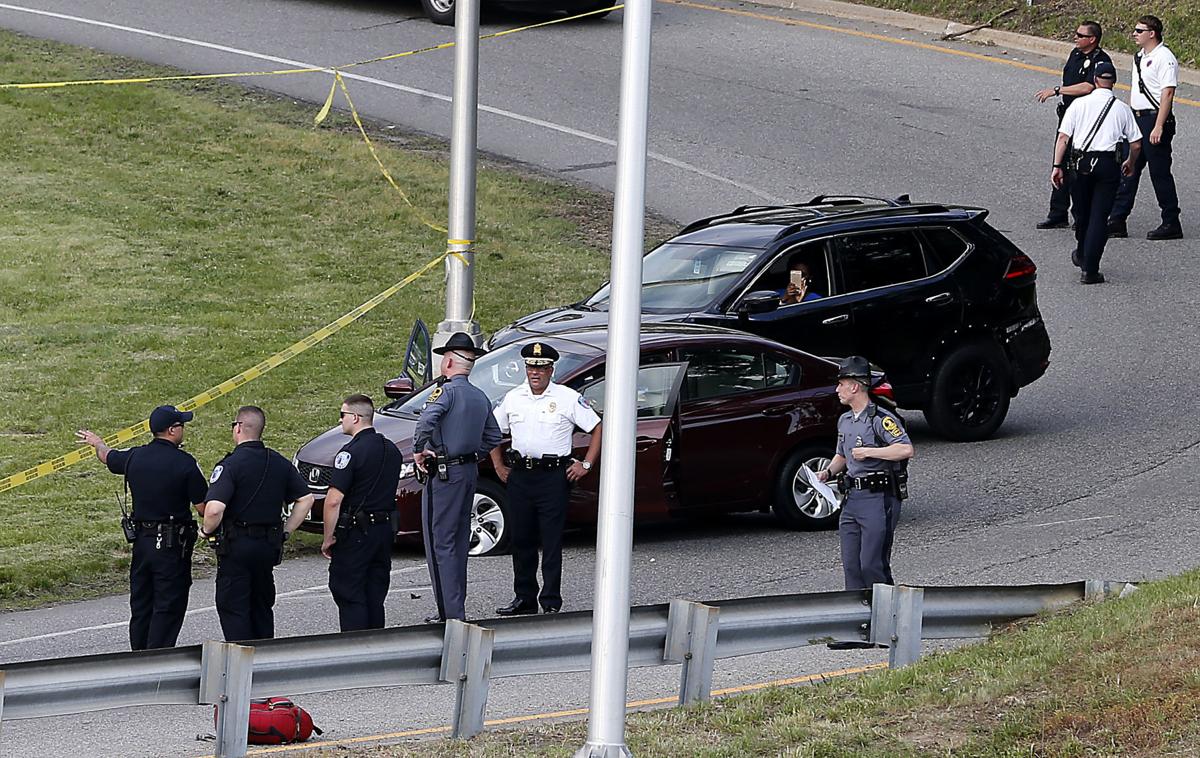 Richmond Police Chief Alfred Durham (center, white shirt) along with his officers and Virginia State Police during activity along exit ramp for 95N/64W off of Belvidere Street in Richmond VA Mon. May 14, 2018.

MIDDLESEX — Marcus-David Lamar Peters taught a full day of classes on Monday at Essex High School, where he taught biology.

He drove home more than 50 miles to the Henrico County apartment he shared with his girlfriend.

Around 5 p.m., wearing a pinkish-red shirt and pants, he set off again, bound for downtown Richmond, telling his girlfriend he loved her as he walked out the door.

Thirty-seven minutes later, Peters was shot multiple times by a Richmond police officer after striking three cars, leading police on a short pursuit, crashing his own vehicle, then dancing and rolling naked on Interstate 95.

Just after midnight Tuesday, he died.

An explanation for what changed in Peters during that half-hour remains a mystery, leaving his family and friends wondering what went wrong.

How could the man they knew and loved, the one who decided he couldn’t quit teaching because of his fondness for his students, be the same man who one photograph showed lying on the interstate with no clothes?

As they grieve, family members are calling for changes to policing policies that they say too often end in death for black men.

“He did not need a bullet,” said Princess Blanding, the older sister of Peters, from the porch of her Middlesex County home. “He needed help.”

Police said Peters was shot as he charged at the Richmond officer, who first fired a Taser that proved ineffective.

The Office of the Chief Medical Examiner said Wednesday that Peters died from gunshot wounds to the abdomen.

On Thursday, police identified the officer who fired the fatal shots as Michael Nyantakyi, who has 10 years of service with the department and, like Peters, is black. Nyantakyi will remain on administrative leave while the department investigates the shooting.

“I don’t care if the police officer was black, white or of Asian descent — our concern is the way that officers in general are going about addressing our black men and women,” Blanding said. “We need to equip our officers with other ways of de-escalation and alternatives to deadly force.”

She suggested arming officers with sedatives to pacify people, like her brother, who “was clearly in distress and in need of help,” she said. She called for an overhaul of police tactics that she said seem more hostile toward men and women of color.

“I am a realist,” Blanding said. “The reality is this is continuously happening. It has to stop. It’s not OK to just say ‘Justice for Marcus,’ we have to change our policies.

“They didn’t have to kill him,” she continued. “Nikolas Cruz killed 17 people at the Parkland shooting; Travis Jeffrey Reinking killed four people in a Tennessee Waffle House; Dylann Roof killed nine people in Charleston. They were all armed, and they received restraint. They didn’t receive death.”

Blanding saw her brother, one of 12 children and the youngest boy, the day he died. She’s an administrator at Essex High School where he taught biology. She confirmed he taught the entire school day Monday. She added that he had no history of mental illness, drug abuse, violence or criminal activity that might have explained the encounter with police.

“There was nothing that led me to believe we would be where we are right now without him,” Blanding said.

She looked for him after school expecting a disciplinary report, but couldn’t find him after classes let out.

Around 5 p.m., she received a text from Peters’ girlfriend, who said he’d come to their apartment in the 6700 block of Dartmouth Avenue briefly before going to meet a co-worker at The Jefferson Hotel, where he worked part time as a security guard. A spokeswoman for The Jefferson has declined to comment about Peters in the days since his death.

Natalie, his girlfriend, who agreed to speak publicly on the condition that her last name remain private, said she didn’t want Peters to leave, but she couldn’t persuade him to stay.

She said he came home, “took some things off, like his work badge. Afterward he told me he really loved me.”

That wasn’t out of character, she said. “He said it all of the time. He was literally the best person I ever met.”

The two met while he was a resident assistant at Virginia Commonwealth University, where he graduated with honors in 2016.

Around 9 p.m., officers came to their apartment and told her Peters had been in a car accident and was in the intensive care unit. It was two hours later that she found out he’d been shot by police.

Blanding said the family rushed to hospital, also under the impression that he’d crashed his car.

“When I saw my brother, I knew he was gone,” she said.

Javonti Braxton, who met Peters while they were both resident assistants at VCU, called his friend an “amazing person” who was always looking for ways to help others.

“He was someone who just cared. He had a big heart,” Braxton said.

Braxton, who was born and raised in Tappahannock, said that when he last saw Peters in person in April, Peters indicated he was considering not returning to teaching next year. Peters eventually texted Braxton saying he changed his mind because he cared about his students so much.

Peters was never one to share whether he was struggling, Braxton said.

“If he had any problems, it would be easily missed because he kept things together,” Braxton said.

De’Geon Briggs of Hampton said even as an older cousin, he looked up to Peters, whose nickname among family was “Poppy.”

“A few days ago, his accumulative impact compounded with previous accomplishments evaporated in one moment because someone failed to see his humanity,” Briggs said. “He was the last person that I would have ever suspected not only to have police contact, but to die at the hands of police.”

In an unprecedented move, Police Chief Alfred Durham said the department will release the officer’s body-worn camera footage in an effort to “clear the air and set the record straight.”

“Showing the complete, unedited video to the family will allow us to provide a greater understanding of the circumstances that led to the use of deadly force,” Durham said in a statement.

Durham invited Peters’ family to first view the video, and he said that afterward, he would hold a news conference and release it to the media. Blanding said the family wants to see the officer’s video, as well as any others the police have collected.

The department has never publicly released videos since officers began wearing body cameras in 2015, Durham’s first year as chief. The department has previously only allowed those involved in an incident to view the footage.

Peters is the first person to die at the hands of Richmond police this year and the seventh killed by law enforcement in Virginia in 2018.

Richmond officers have shot two others who survived since January: an unidentified juvenile and a white man. Both were fleeing from officers when they were shot; only the youth was armed.

Last year, officers shot and killed two men, one white and one black. Both were armed.

“It is my vow to Marcus and my family to continuously fight for justice, equality and change for Marcus,” she said. “We still have so many unanswered questions.”

Young Henrico man fatally shot by Richmond police was high school teacher in Essex County; cause of death was wounds to abdomen

Williams: If the Richmond Police Department continues to reject transparency, it will sacrifice trust

There was no toy gun. No mobile phone. No pill bottle. No pocket to reach into.

Williams: There's more to transparency than showing a video. Richmond police leave questions unanswered in the shooting of Marcus-David Peters.

De’Geon Briggs (left), a cousin of Marcus-David Lamar Peters, and Princess Blanding, Peters’ sister, spoke Thursday about the death of their family member.

Princess Blanding, the sister of Marcus-David L. Peters, who was fatally shot along Interstate 95/64 on Monday, talks during a press conference on Thursday May 17, 2018.

De'Geon Briggs, cousin of Marcus-David L. Peters, who was fatally shot along Interstate 95/64 on Monday, gets emotional during a press conference on Thursday May 17, 2018.

Richmond Police Chief Alfred Durham (center, white shirt) along with his officers and Virginia State Police during activity along exit ramp for 95N/64W off of Belvidere Street in Richmond VA Mon. May 14, 2018. 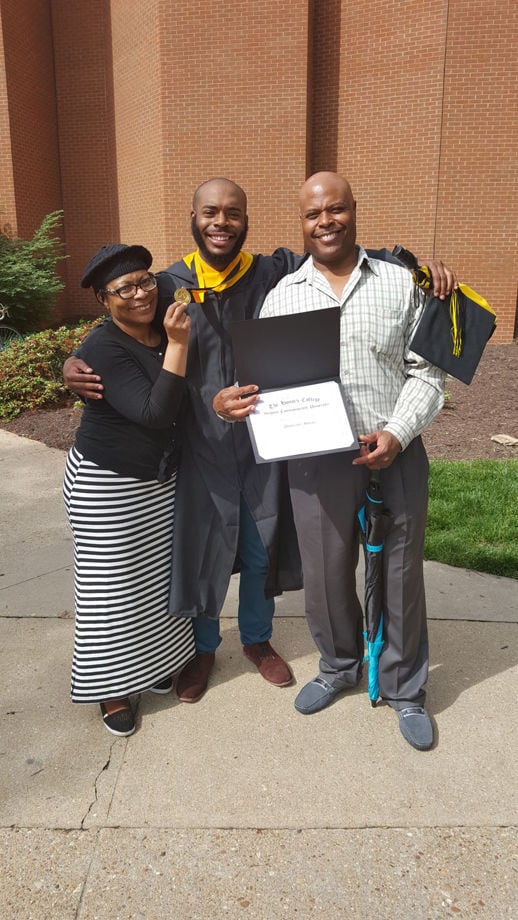