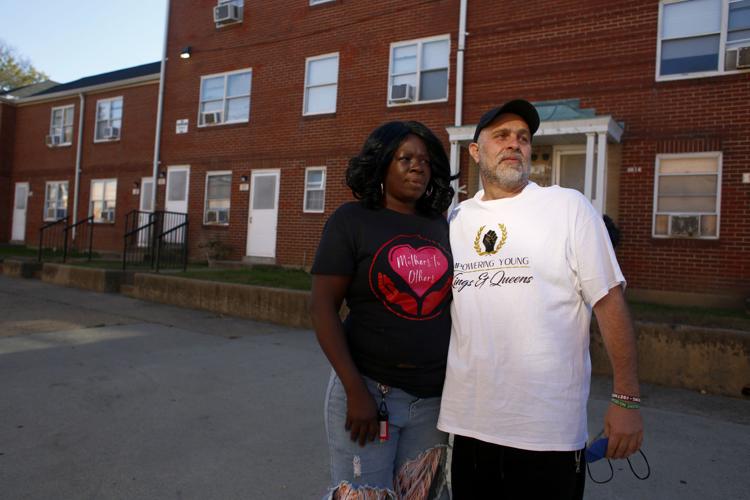 Healing Us graduates Teenora and Ronald Thurston, shown near their home in Richmond’s Gilpin Court, received certificates symbolizing their commitment to use the skills they learned to intervene and respond to trauma in their communities. 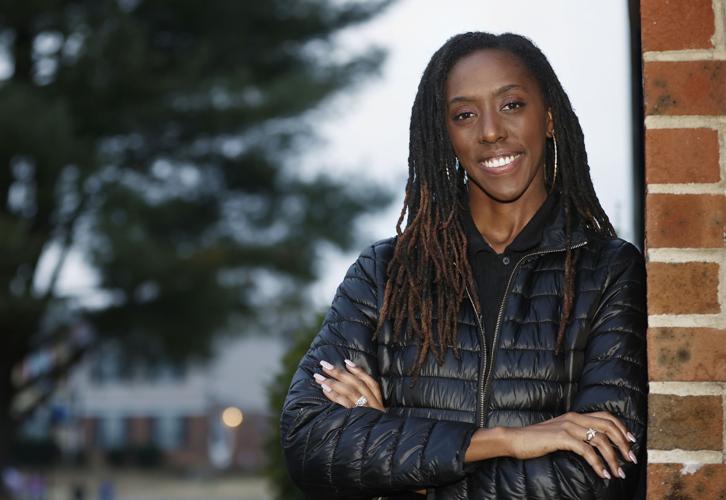 Jackie Lawrence, who created Healing Us in 2020, earned a master’s in social work from VCU in 2017. She is director of health equity for the Richmond and Henrico Health Districts. 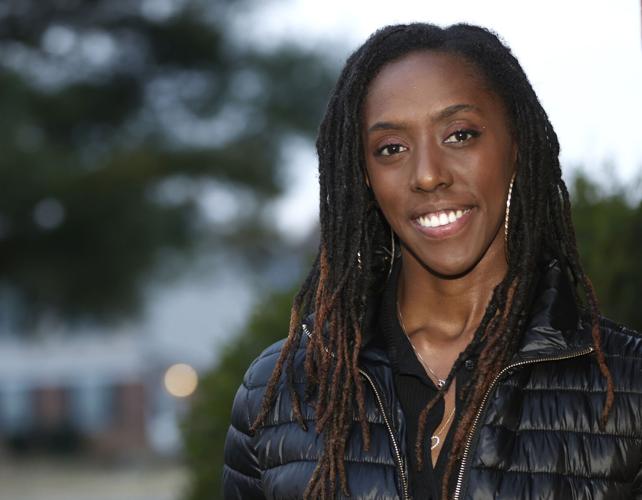 Jackie Lawrence, a trained social worker and director of health equity for the Richmond and Henrico Health District, founded the Healing Us initiative in 2020. Photo was taken Monday, Dec. 6, 2021. 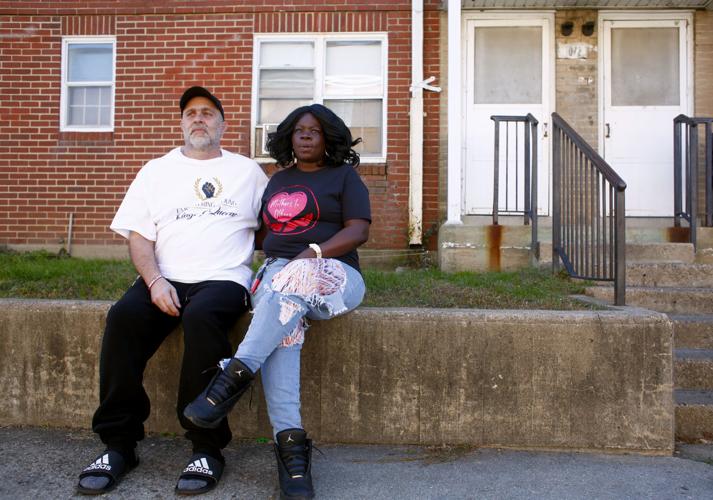 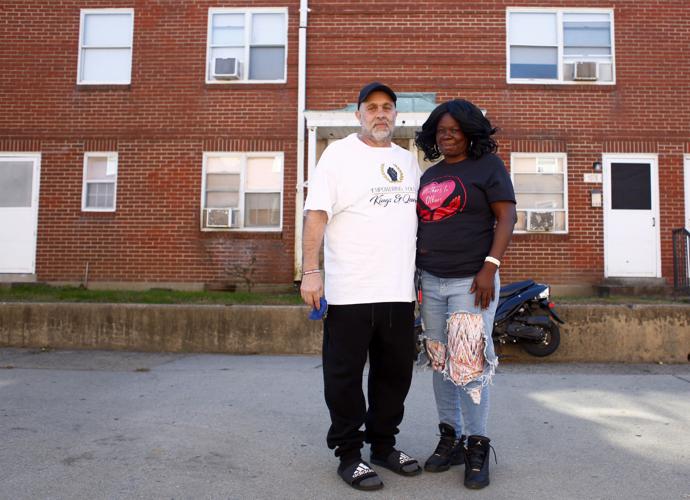 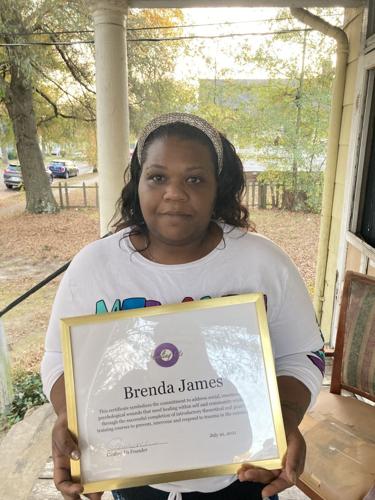 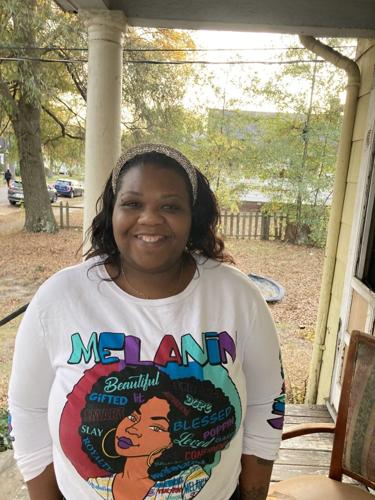 Brenda James has experienced homelessness, addiction, mental health issues and jail. The Healing Us graduate feels empowered to be there for her South Side neighbors.

Around Gilpin Court, kids of all ages know him as “Coach Ron.”

But in all his years of coaching, Ronald Thurston had never told anyone about his childhood, or how the abuse he suffered was part of his motivation to be a mentor. Then, when he signed up for the Healing Us initiative, it slowly came pouring out.

Hoping to help himself and learn to establish his own organization, Thurston, 48, joined the program with his wife, Teenora Thurston, and six other community healers in training.

The connections he made with other participants in the program helped him feel safe to talk about things he’d been holding inside all his life.

“It made you feel like there were other people who were going through things,” Ronald Thurston said in a recent interview outside his home in Gilpin Court. “It was time for me to release — to become a better person.”

Thurston believes the invaluable skills he learned while participating in the Healing Us initiative have allowed him to have an even greater empathy for the children he mentors, many of whom are struggling with trauma.

Jackie Lawrence, a social worker who is director of health equity for the Richmond and Henrico Health Districts, created Healing Us in 2020 to offer training to people who were already community healers in Richmond’s underserved communities. The program sought to help participants heal themselves so they could better use their innate gifts and life experiences to respond to trauma in their neighborhoods.

This can be done by connecting residents to such resources as counseling, for example, or by providing support to someone who lost a relative to gun violence.

Violent crime statistics in Richmond have held steady this year, but the number of killings has risen from 75 in all of 2020 to at least 90 people slain so far this year. The deaths include some that Richmond police don’t record in their homicide statistics, including self-defense killings. At least an additional 225 people have been wounded by gunfire this year in the city.

A central theory of the Healing Us initiative is that communities of color know what is needed to heal themselves, and that through training, connection and community programming, they can do just that. Residents are more likely to trust helpers who are from their community and relate to them more effectively.

Healing Us also directly explores the generational and emotional wounds of oppression in communities of color, and the training effort focused on serving Black communities in Richmond.

Residents of these communities need help with deep-seated trauma, but too often, therapists don’t talk about mental health challenges in the context of oppression, Lawrence said.

“When we don’t do that, we put all the weight on the person as if they set the conditions up for themselves — that they have contributed to their mental health challenges, while we don’t call out the systems,” said Lawrence, who earned her master’s degree in social work from Virginia Commonwealth University in 2017.

“People in our communities are having to do stuff they don’t want to do that affect their conscience,” she said. “They’re like, ‘I don’t want to go rob somebody.’”

But none of us can truly say we wouldn’t do what was necessary to provide for our families “if your back was against the wall to the point where you’re about to go through the wall,” added Lawrence, emphasizing that she is not condoning crime.

And just as physical and psychological abuse can affect a child’s brain development, a community’s health is affected by such things as gun violence, hunger and the government’s withholding of funding, Lawrence said.

The average person in Gilpin Court — where 80% of residents are living in poverty — has a life expectancy of 63 years, according to a report from VCU’s Center on Society and Health. In the Museum District and near Windsor Farms, residents live for 77 years.

In 2018, Lawrence joined the Robert Wood Johnson Foundation’s Culture of Health Leaders program. The foundation provided seed money for Lawrence to later found the Healing Us initiative in partnership with the Richmond Association of Black Social Workers.

The Healing Us initiative provided about eight months of training and programs starting in October 2020.

Lawrence, a 28-year-old resident of eastern Henrico County, also is starting The LightWork, a consulting company that provides project management for Healing Us.

Since the training portion of Healing Us ended in September, the initiative’s 2022 goal is to become more focused on providing funding to organizations that already have an audience. Healing Us is supporting healing circles, including one for mothers who have lost a child.

Healing Us also helped start The Trauma Healing Response Network, a collective of volunteers, mental health professionals and others that meets monthly to assess the needs of residents of The Belt Atlantic, an apartment community in South Richmond. The response network was formed after a shooting at the community in April left a woman and her baby dead and three other people wounded.

With each violent incident comes new trauma to families and friends of the victims and to their communities. That is where Healing Us comes in.

For the training portion of the initiative, Ronald and Teenora Thurston were among eight participants who graduated in July and received certificates symbolizing their commitment to use the skills they learned to intervene and respond to trauma in their communities. The other graduates were Joyce “Betty Lou” Brown; Keisha Cummings, the CEO and founder of 2Love LLC; Brenda James; Ronald Lee; Zina Mason; and Danny Smith.

2Love, a consulting company that specializes in bringing communities together, provided extra support for participants in the training.

Healing Us provided each graduate with $700 to put toward healing in their neighborhoods.

Every Sunday, he gets water and snacks and provides fun things to do for kids at the Calhoun Center, sometimes for as many as 100 children in warmer weather. He also has been mentoring kids almost daily at Thomas Jefferson High School. By working through his own trauma and going through the Healing Us program, Thurston says he is a better listener when children have something they need to tell someone and he also understands them better.

Thurston teaches kids that they need to be thinking ahead to the consequences of their actions.

“I tell them you’ve got to stop playing checkers and start playing chess,” he said. “I try to find the kids that the other kids go behind. The rest will follow.”

His wife, Teenora, is using her funding to start a nonprofit called “Mothers to Others.” She has already been involved in mutual aid projects to bring food and household supplies to her neighbors.

Now, she’s looking for more storage space for such things as clothes, frozen food and other necessities to give away. She said employees at the rental office at Gilpin Court refer residents to her for help getting anything they need, including helping them find rental assistance.

Teenora Thurston, 44, said she experienced a traumatic childhood and wants to show others that she’s in their corner and there is hope.

“We have been there and fought our way through,” she said. “So to help someone else is a blessing.”

Another program participant, Joyce “Betty Lou” Brown, helps homeless people and keeps such things as food, drinks, soap and deodorant in her car’s trunk to distribute. She has used some of her funding from Healing Us to donate to community events, including a Turkey Bowl flag football event on Thanksgiving Day at Martin Luther King Jr. Middle School.

One of the homeless men Brown regularly visits often panhandles near downtown. She has given him clothes, deodorant, coats and boots from the trunk of her car, and she has listened to him talk about his life and his family.

Brown, 71, who lives in South Richmond, earned her high school diploma through Dream Academy Richmond one month before graduating from the Healing Us program.

Now, she plans to go to school and become a certified nursing assistant and work at a nursing home.

“I would describe myself right now as a community healer in progress,” she said.

“I never had the chance to really love myself; I was always trying to help others,” she said. “I was staying in a bad relationship for 22 years.”

She believes that God wants her to be a community healer in the streets. In the Healing Us program, she said she experienced a spiritual connection to the other participants and feels empowered to be there for her neighbors.

Healing Us graduates Teenora and Ronald Thurston, shown near their home in Richmond’s Gilpin Court, received certificates symbolizing their commitment to use the skills they learned to intervene and respond to trauma in their communities.

Jackie Lawrence, who created Healing Us in 2020, earned a master’s in social work from VCU in 2017. She is director of health equity for the Richmond and Henrico Health Districts.

Jackie Lawrence, a trained social worker and director of health equity for the Richmond and Henrico Health District, founded the Healing Us initiative in 2020. Photo was taken Monday, Dec. 6, 2021.

Brenda James has experienced homelessness, addiction, mental health issues and jail. The Healing Us graduate feels empowered to be there for her South Side neighbors.