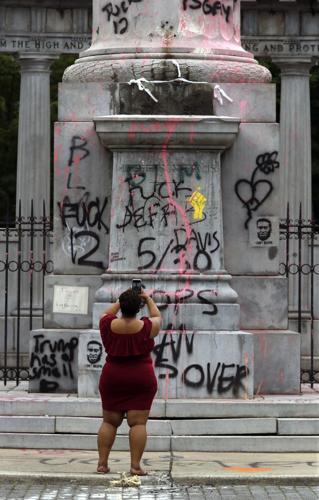 Protesters toppled the statue of Christopher Columbus from its pedestal Tuesday night, following a rally in support of indigenous peoples. 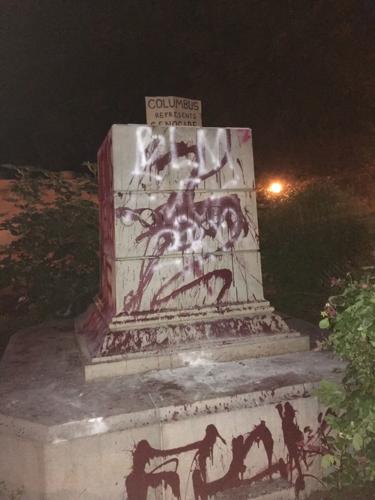 The statue of Christopher Columbus in Byrd Park was pulled down by protesters Tuesday night after a rally for indigenous peoples.

You might have figured Columbus was out of sight and mind at the end of Arthur Ashe Boulevard as local and national attention focused on the Confederate statues on Monument Avenue. But he was removed from his perch on Tuesday night. The following night, Jefferson Davis met the same fate. Williams Carter Wickham was the first Confederate general to fall in this battle for Richmond’s soul, taken down the night of June 6 in Monroe Park.

The pervasive mood has shifted from whitewashing history to unmasking travesties, including the torture and genocide of indigenous people in the West Indies by Columbus.

“To community members and organizers, the Christopher Columbus narrative represents the first leg of a mythical heroes relay race,” in which the participants pass a baton driving exploitation of land and labor, said Chelsea Higgs Wise, a local activist and podcaster who attended the Byrd Park demonstration in solidarity with indigenous peoples.

“Drowning the Columbus statue was a way for Richmond to correct our narrative,” she said. The toppling of other statues this past week “directly connects how the genocide of stolen land paved the way for Virginia to create generational wealth by labeling Africans as human cargo,” she added.

Gov. Ralph Northam has moved to extract Robert E. Lee from his base, though that is tied up in litigation. Mayor Levar Stoney and Richmond City Council are poised to remove the other Confederates on Monument Avenue. Confederate statues have been beheaded or removed in Portsmouth and Norfolk.

It’s as if folks suddenly have realized that they’ve been victims of a multi-generational gaslighting that assigned heroic stature in the public square to agents of enslavement, treason and torture.

This all is unnerving for those who prefer order to chaos. Statue removal potentially is dangerous for protesters. But trauma, confinement and justifiable impatience are a potent mix.

“When you fail to talk about this country’s tortured racial history during times of normalcy, I think this is what you end up with during times of unrest and upheaval,” said University of Richmond historian Julian Maxwell Hayter.

If you’re a demonstrator, you’re probably inclined to strike now, before police begin to crack down or the public mood shifts from Black Lives Matter to lock ‘em up.

But for now, “I think the pandemic in some ways has heightened people’s sense of vulnerability and it’s washed away our distinctions,” Hayter said. Of course, he’s quick to add, that feeling is not unanimous in this age of polarization. Some people can’t even be compelled to wear a mask for their own well-being and that of others, much less acknowledge police brutality or white supremacy.

The optimist in me feels permanent change in the air; the realist wonders if this energy is sustainable.

But young people appear to be hyper-attuned to the brokenness that is the United States today. It wasn’t working for many of them even before the pandemic and the deaths of George Floyd and Breonna Taylor at the hands of police, and jogger Ahmaud Arbery by vigilantes.

“I think there’s a deep-seated, broad-based unrest, especially with younger people, who in some ways recognize that their future has been leveraged,” Hayter said, adding that “they’ve lost faith in the boomer generation’s ability to negotiate our way out of these messes.”

But Hayter, who served on Stoney’s Monument Avenue Commission, says you cannot make the Lost Cause narrative go away simply by tucking away symbols of white supremacy. They must be part of a teachable moment if America is to deal with its legacy of racism.

“You win the mob over by taking down the statues. I think you win the masses over with what you do with them afterward.”

I say we could place them at a battlefield or Civil War museum. Or how about an institution focused on race and civil rights?

The erection of those monuments coincided with the nadir of American race relations from the end of Reconstruction into the early 1920s, with the rollback of black voting rights and political gains, the establishment of Jim Crow and other preludes to current-day inequities in income, employment, health, education and housing.

We’re at a moment where folks are demanding that we take an honest look at these statues and their true legacy, at eye level.

This is our moment of truth to create a legitimate cause out of a lost one.

To do so, the prevailing mythology must come crashing down to earth. We can’t properly assess what’s been placed on a pedestal.

Protesters toppled the statue of Christopher Columbus from its pedestal Tuesday night, following a rally in support of indigenous peoples.

The statue of Christopher Columbus in Byrd Park was pulled down by protesters Tuesday night after a rally for indigenous peoples. 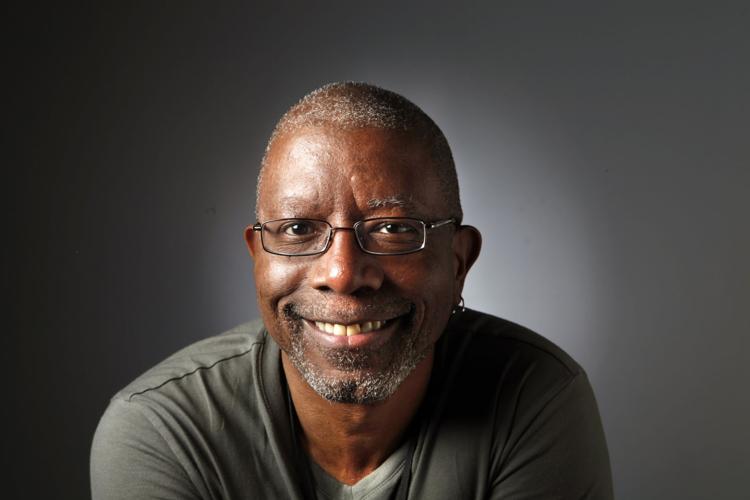