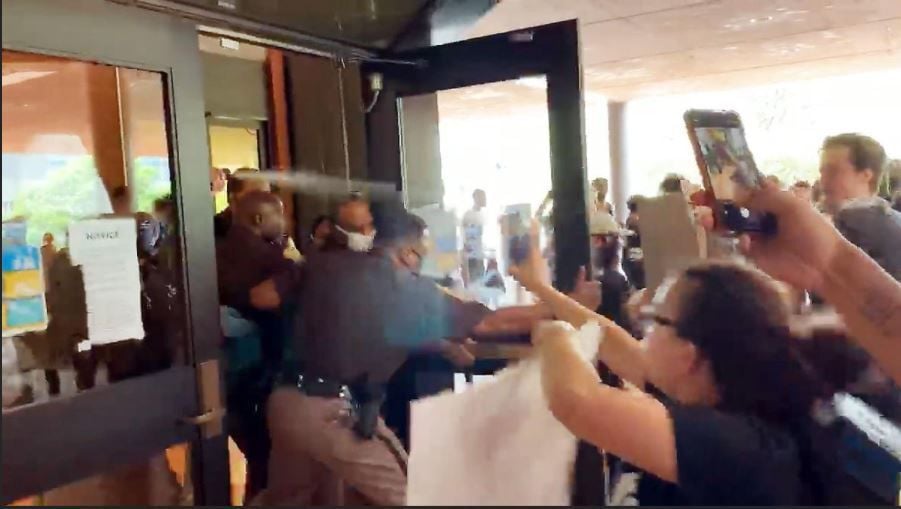 Demonstrators clashed with Richmond sheriff's deputies at the John Marshall Courthouse on July 1, 2020. 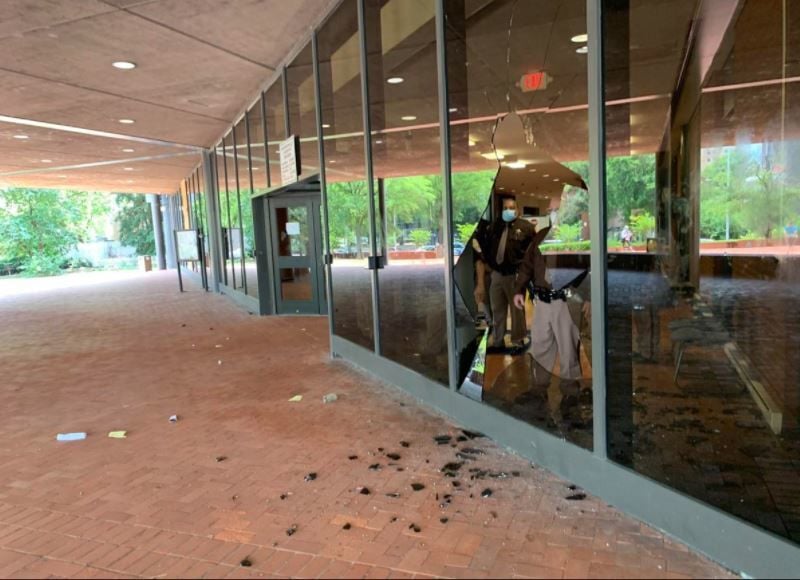 A large plate glass window was shattered at the John Marshall Court House during a protest on July 1, 2020. 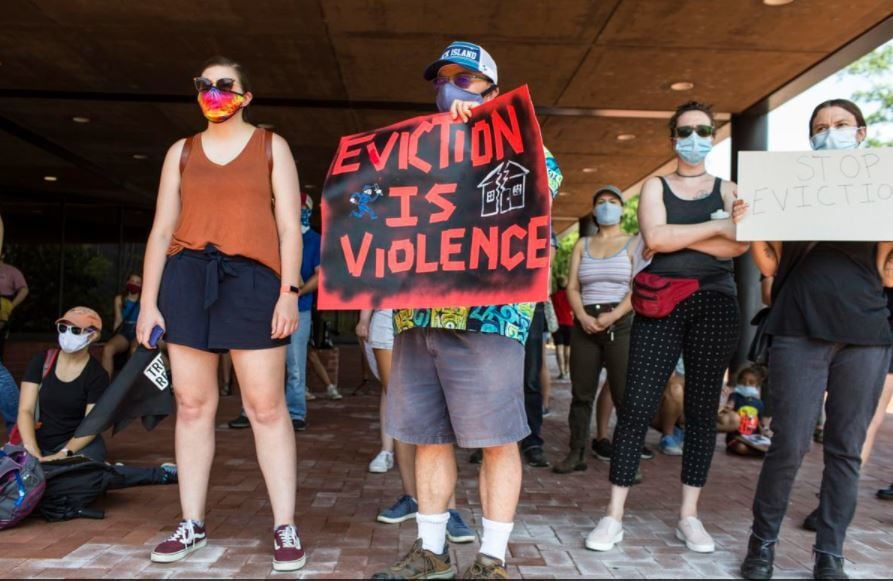 A housing rights organizer for the Legal Aid Justice Center pleaded guilty Monday to obstructing justice with force and trespassing for his role in a July 2020 anti-eviction protest, during which a prosecutor said he and another protester forced their way into the John Marshall Courthouse and refused to leave after sitting on the floor.

As a crowd of protesters began to converge on the courthouse, Richmond sheriff’s deputies declared the building closed and were attempting to close the front doors, when Omari Al-Qadaffi and co-defendant Irena Schunn pushed their way inside, locked arms and sat on the floor, Assistant Richmond Commonwealth’s Attorney Katherine Groover said.

Al-Qadaffi, 40, carried a megaphone inside and began “hitting the siren button” on the device, which created “blaring noises” inside the courthouse, Groover said. The deputies then asked Al-Qadaffi and Schunn to stand up and leave and to stop hitting the siren button. Both refused to comply, said Groover, who noted the incident was captured on video.

“The deputies repeatedly ask them to stand up and leave and they both refuse, and they remained seated on the ground of the courthouse,” the prosecutor said. “And that’s when the deputies attempt to stand them up and ... [Al-Qadaffi] uses force and obstructs them by kicking his feet at them.”

As the officers scuffled with Al-Qadaffi, protesters outside “threw some sort of liquid substance on the deputies,” Groover said.

In a video taken by a Richmond Times-Dispatch reporter outside of the courthouse at the time of the disturbance, protesters can be heard shouting profanity, and some can be seen kicking or pounding on the large exterior courthouse windows, demanding that Al-Qadaffi be released. Deputies used pepper spray to deter the crowd as they tried to enter; at one point, a large plate glass window was shattered.

Al-Qadaffi allegedly kicked two sheriff’s deputies, injuring one, while he scuffled with them inside. He was charged with two felony counts of assault and battery of a law enforcement officer, but Groover withdrew those charges Monday in exchange for his guilty pleas to the two lesser counts.

Retired Circuit Court Judge David Pugh from Newport News accepted Al-Qadaffi’s pleas and found him guilty; he set sentencing for Dec. 6. Pugh was appointed to hear the case after all of Richmond’s circuit court judges recused themselves.

Groover and defense attorney Sara Gaborik each plan to call several witnesses during the sentencing hearing before Pugh decides on punishment. Both sides have agreed to cap Al-Qadaffi’s sentence at no more than 60 days to serve, which is what a lower court imposed before he appealed his convictions to circuit court.

Groover told the court that the two deputies Al-Qadaffi allegedly kicked are satisfied with the felony assault charges being withdrawn. Both will be present at sentencing, and at least one of them is expected to testify.

Roughly 30 supporters of the defendants filled most of the available seats in the gallery of the courtroom where the cases were heard.

Al-Qadaffi originally sought to be tried by a jury, but decided Monday to plead to two of the four offenses after Groover and Gaborik worked out a verbal agreement. There was no formal, written plea agreement.

During a hearing in July, Groover told the court that Al-Qadaffi and Schunn should be tried together, and the judge agreed. At that time, both defendants indicated they wished to be tried by a jury. “They walked into this courthouse together,” Groover said. “They committed these acts together.”

After the July hearing, Al-Qadaffi said he was demonstrating as part of a protest against the resumption of evictions in Richmond during the pandemic. He said he hadn’t known Schunn before the protest, nor did he know why she was there.

Al-Qadaffi said he walked into the courthouse to observe eviction proceedings and was immediately accosted by the deputies. He denied kicking the officers.

After Al-Qadaffi’s case was resolved Monday, Schunn appeared for what was scheduled to be guilty pleas to charges of trespassing and obstruction of justice. But her attorney, public defender Zachary Gaver, said Schunn had changed her mind and now wants to be tried by a jury. Her trial date will be set in November.

Both Al-Qadaffi and Schunn had been found guilty of the misdemeanor charges in Richmond General District Court in October 2020, but both appealed their convictions to Circuit Court.

Al-Qadaffi had been sentenced to a total of 180 days in jail with 120 days suspended on both misdemeanor counts, leaving him 60 days to serve. The two felony assault charges were certified to a Richmond grand jury and he subsequently was indicted on those offenses.

Schunn was sentenced to a total of 40 days on both counts with 30 days suspended, leaving her 10 days to serve.

Demonstrators clashed with Richmond sheriff's deputies at the John Marshall Courthouse on July 1, 2020.

A large plate glass window was shattered at the John Marshall Court House during a protest on July 1, 2020.