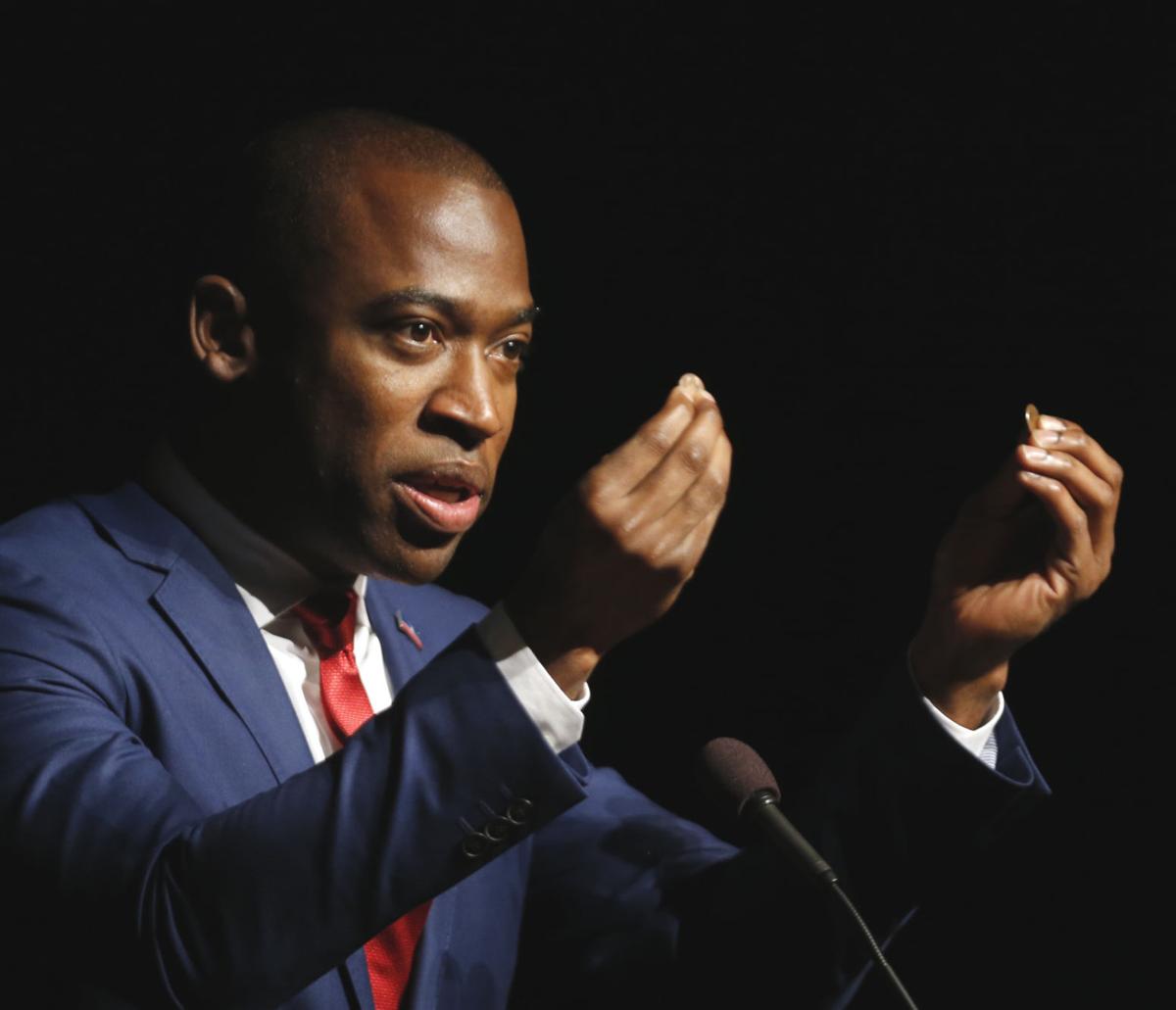 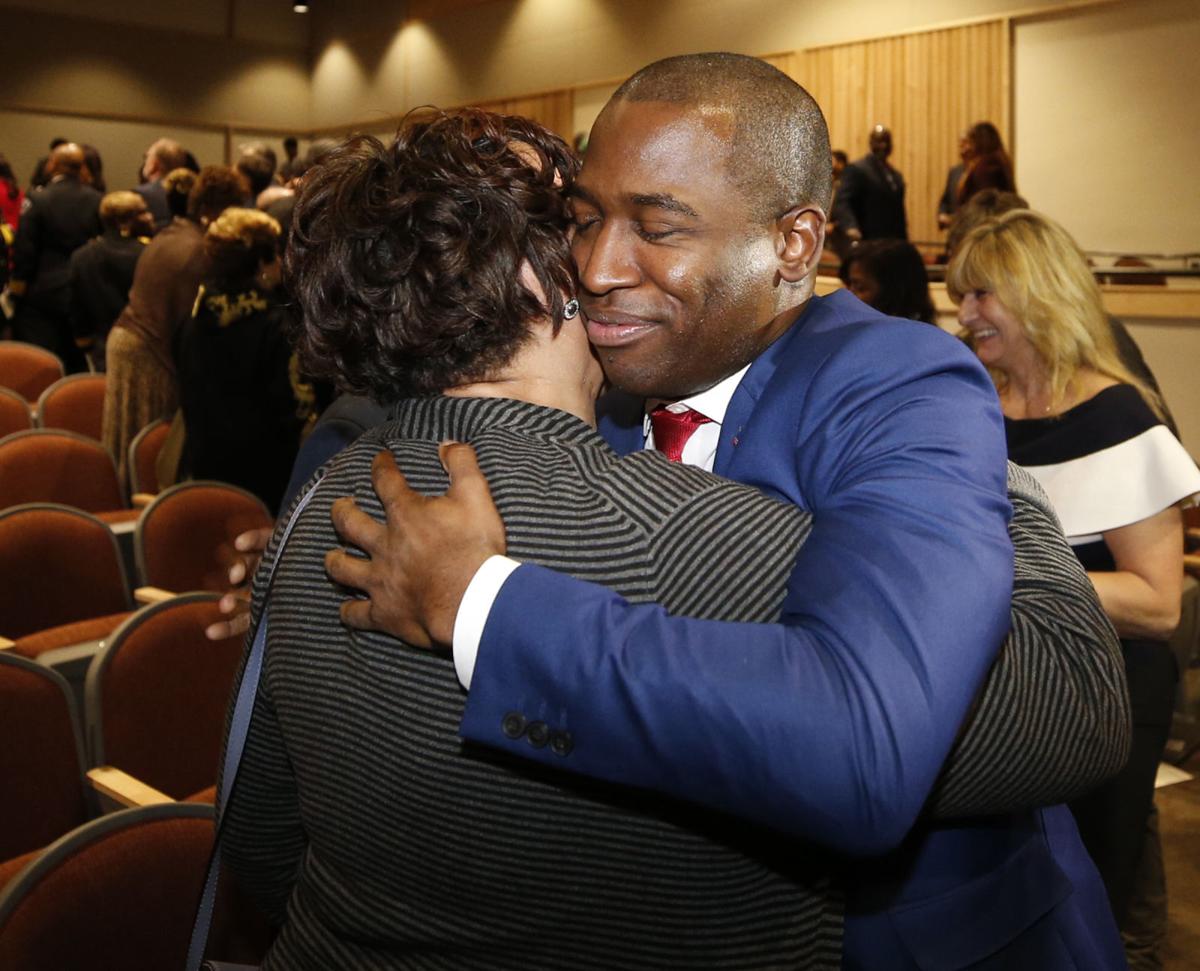 Mayor Levar Stoney greets supporters after his State of the City address on Tuesday, January 23, 2018. 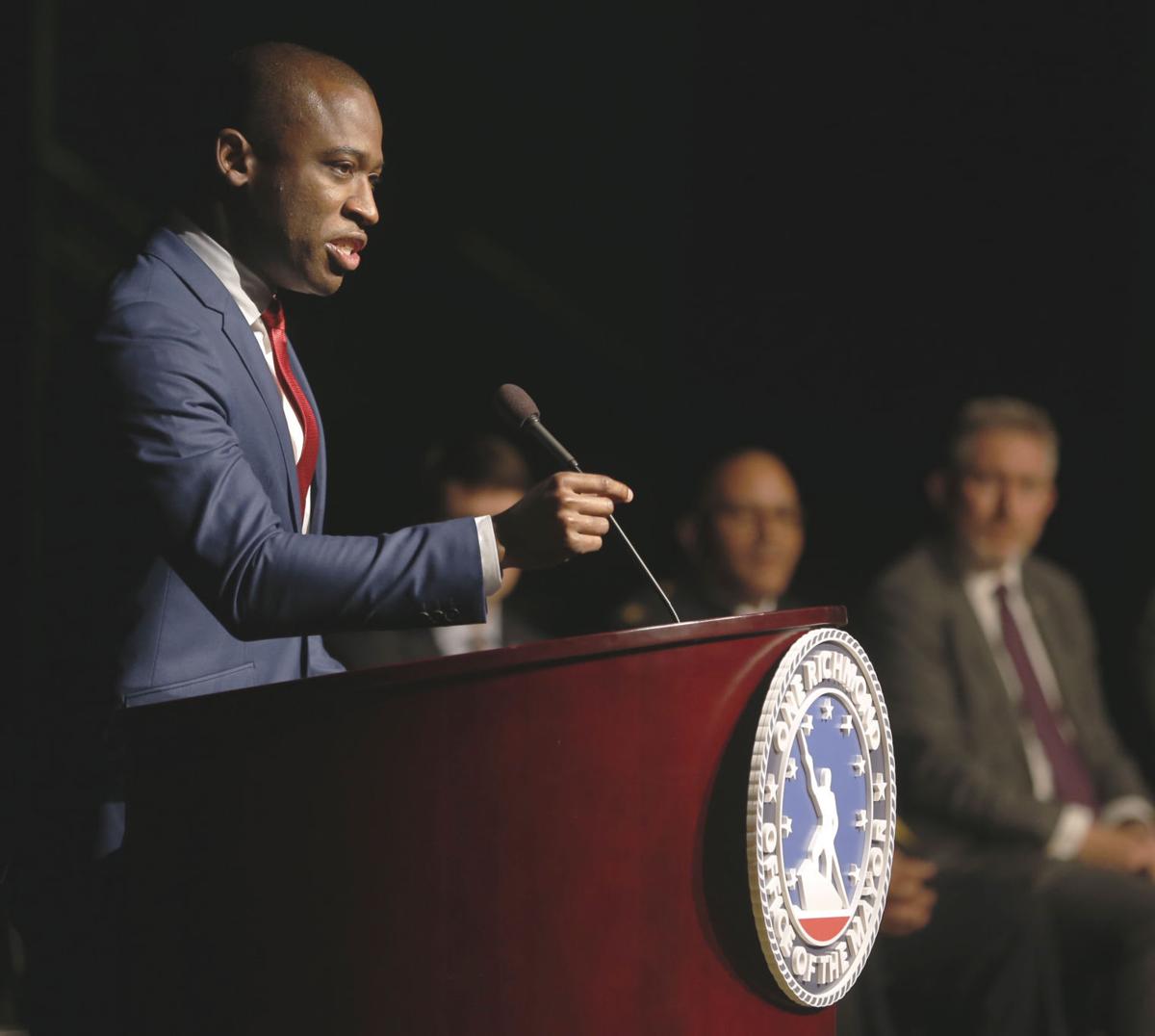 Mayor Levar Stoney also set goals for his administration during his State of the City speech. He wants to unveil a new city website and increase affordable housing units. 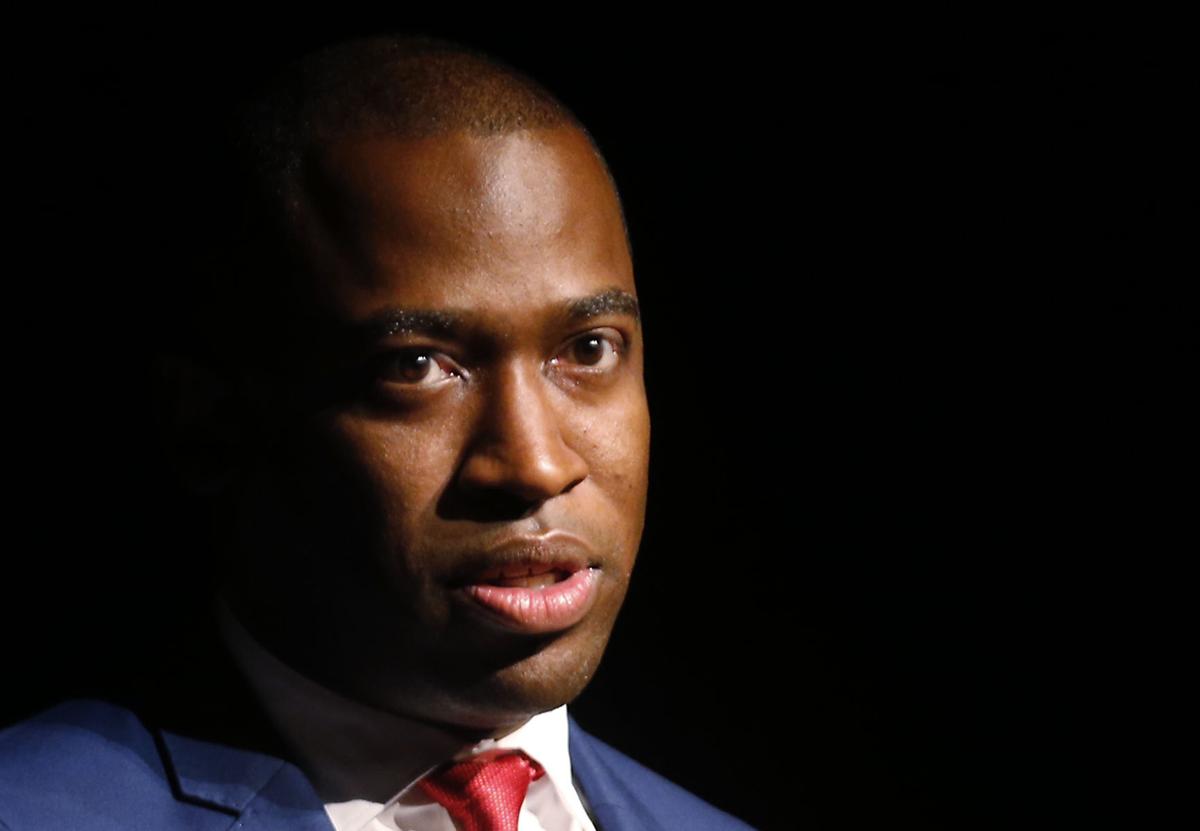 Richmond Mayor Levar Stoney on Tuesday made the first public pitch of his newly released plan to fund new construction of city schools by way of a proposed increase to the city’s meals tax.

The pitch came as Stoney, now in his second year as mayor, delivered his State of the City speech to a crowd gathered in the auditorium of Martin Luther King Jr. Middle School in the city’s East End.

“Let me be clear: I do not relish the idea of imposing a higher tax on any of our residents, or even our visitors. And I respect the concerns of our restaurateurs who are responsible for so much of the positive trends we’ve seen in our city,” the mayor said. “I promise to be a champion — a committed champion — for their success, and pledge that we will work with you to make it easier for you to grow and expand.

“But, we are talking about one and a half pennies. One and half cents — for our children. Less than these two pennies I have in my hands,” he continued, holding them up to applause from those in attendance. “Surely, our kids are worth that much.”

On Monday, Stoney’s administration proposed increasing the city’s meals tax by 1.5 percentage points, from 6 percent to 7.5 percent, in a move that would generate an estimated $9.1 million per year.

The additional revenue would allow the city to borrow up to $150 million more to fund school construction and renovations by expanding its limited debt capacity, a hindrance that would defer action on the school system’s “emergency needs” until 2023, Stoney said.

The mayor announced the proposal about a month after the Richmond School Board passed a $224 million plan — the first phase of many — to build new facilities that school administrators have recommended should receive priority.

Stoney’s plan would leave a $74 million gap in funding for the improvements, a shortfall the mayor alluded to in his remarks Tuesday night.

“I want to thank the School Board in passing their school facilities plan in December, and I will not dictate to the School Board, as has been done in the past, on what schools to build or how to build them,” Stoney said.

“But we will have to stretch every dollar to ensure the greatest outcome for our students.”

After the speech, School Board Chairwoman Dawn Page and Vice Chairman Patrick Sapini said they thought the mayor’s proposal was a good starting point, even if it didn’t meet the board’s initial ask.

“The plan is a living plan, so it can be adjusted,” Sapini said. “Even though (the mayor’s proposal) doesn’t address the full amount, there’s still time to find other ways, possibly, to get it.”

Increasing the city’s real estate tax to fund the plan would put the cost on the shoulders of city residents, Stoney contended when explaining his rationale during his remarks.

A meals tax increase would spread the cost among city residents and tourists, he said, with out-of-towners covering “nearly a third” of it. The new revenue would be diverted to a special reserve and used for Richmond Public Schools capital projects only, Stoney said.

If the Richmond City Council signs off on the proposal, the city’s meals tax would be in line with those of Hampton and Newport News. Currently, the combined sales and city meals tax is 11.3 percent. The mayor’s proposal would increase it to 12.8 percent.

In comments after the speech, Stoney said the introduction of a new cigarette tax is still under consideration as well. “No one is above the possibility of us looking for revenue,” Stoney said.

Asked whether he supports the proposed increase, Richmond City Council President Chris Hilbert said afterward that he would consider any proposal except for a real estate tax increase.

“I’m not rejecting it,” Hilbert said of Stoney’s meals tax proposal. “I think we need some additional revenue. There’s no question about that.”

Stoney also highlighted initiatives from his first year in office in his 40-minute address, among them the formation of the Education Compact, on-time financial reporting for the first time in four years, and improved core services in City Hall.

He also set goals for the remainder of the year, which included unveiling a new, and “long overdue,” city website; completing the 17th Street marketplace construction in Shockoe Bottom; and advancing plans to commemorate the Bottom’s slave-trading history.

Stoney also laid out steps that his administration would take to improve housing and increase opportunity for residents, efforts he said were linked to the city’s aim of improving education.

He called for the construction of 1,500 affordable housing units in the city in the next five years, pledging to propose to the council before year’s end a package of incentives he said would facilitate their construction.

“We must keep in mind that our ultimate goal is not to move poverty around, but reduce poverty itself,” Stoney said.

Mayor Levar Stoney greets supporters after his State of the City address on Tuesday, January 23, 2018.

Mayor Levar Stoney also set goals for his administration during his State of the City speech. He wants to unveil a new city website and increase affordable housing units. 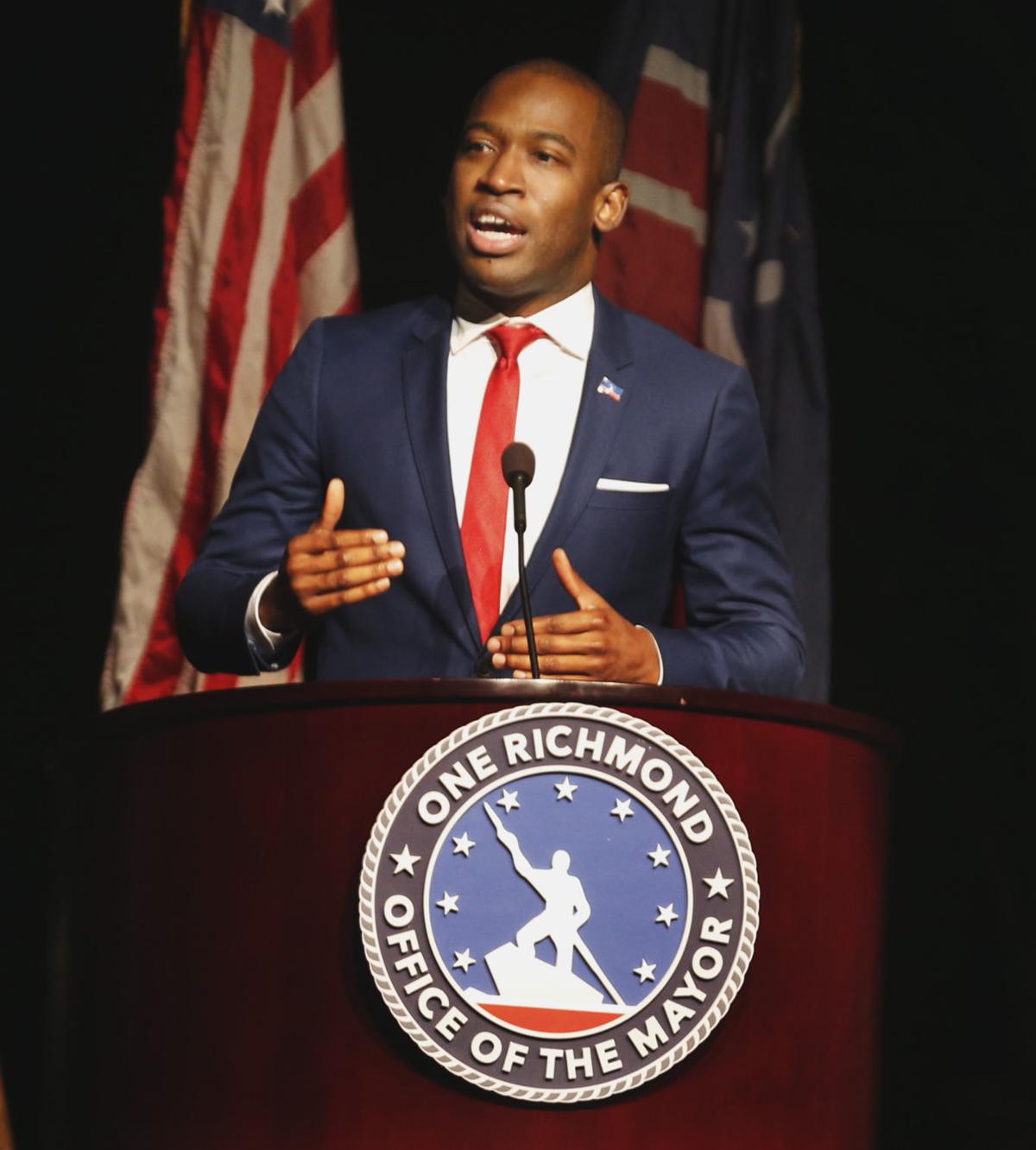