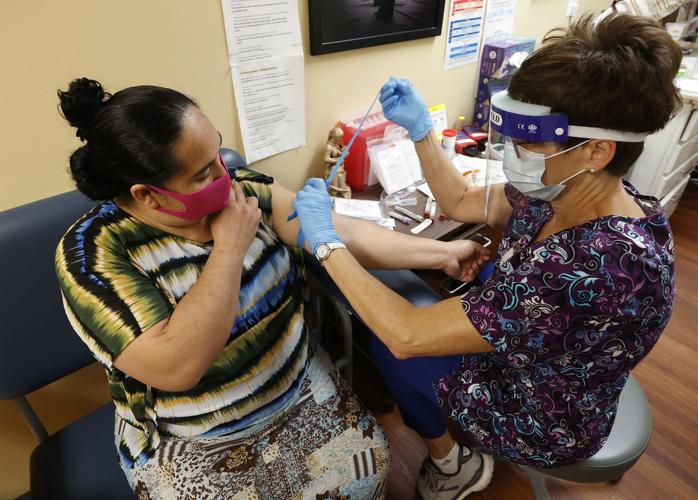 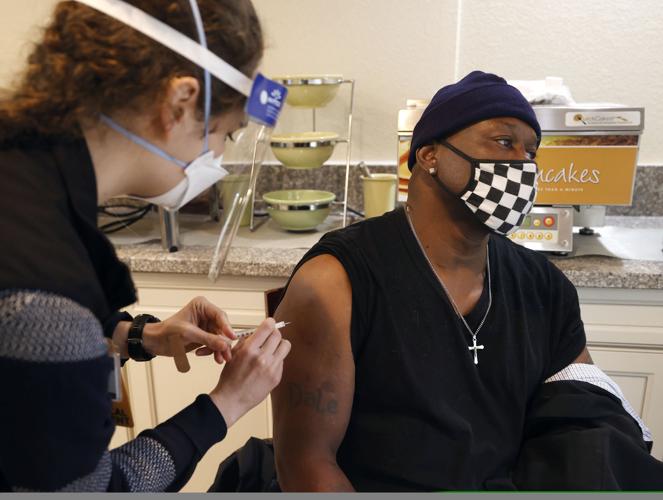 Charlotte Crider, a VCU medical student, gives Dale Spratley a COVID-19 vaccine Tues., Jan. 26, 2021. Richmond Health District partnered with the Daily Planet to give the Moderna vaccine to the homeless at the Homeward shelter

The word “vacunas” was shouted across the patches of grass in the South Richmond neighborhood like a newspaper carrier yelling “Extra! Extra!” in the days when the internet didn’t exist.

In droves, children stomped in front of Health Brigade’s makeshift vaccination table on a recent Saturday afternoon before scoring a goal in a pick-up soccer game. Trusted community outreach workers tapped a few with an important task.

“Dile a tu mami que hay vacunas,” they said. “Tell your mom there are vaccines.”

Over the course of a sun-drenched, four-hour span, a line began to form. At least a dozen residents in Southwood, once a COVID-19 hot spot in the city, were vaccinated.

It’s not the way the U.S. health care system is set up, she added.

“A robust public health infrastructure that is ready to be mobilized for something like this? We don’t have that. It’s just not there,” Waller said. “We’ve put very limited money and thought into our public health outreach, and this is what we’re dealing with.”

The result: Latinos had the lowest vaccination rates in the state while being the most likely to be infected, hospitalized or die from the virus.

In the past month, a shift has occurred. They’re now the second-most vaccinated in Virginia, with 40% of their population receiving at least one dose.

An April national survey from the Kaiser Family Foundation, which monitors vaccination trends, found Latinos are the most likely to say they want the vaccine as soon as possible. But among unvaccinated Latino adults, 64% were concerned they would need to miss work if the side effects continued for at least a day.

More than half feared having to pay an out-of-pocket cost to get a shot, and 49% reported feeling unable to get the vaccine from a trusted provider.

Majority vaccinated at clinics are people of color: The change is happening nationally.

Data from the Centers for Disease Control and Prevention shows that in the past two weeks, Latinos were the second-most vaccinated and at a rate outpacing their share of the population.

Virginia is one of only two states as of Saturday whose vaccinations among Latinos surpasses the group’s share of hospitalizations and deaths for the first time since vaccinations began.

But percentages continue to lag behind their infection rates.

Figures from community clinics, however, show they’ve been succeeding at reaching their patients — most of whom are Black, Latino or immigrants — since the start of the rollout.

At Health Brigade, more than half of the 477 people vaccinated as of mid-May were Hispanic. About a third declined to specify race or ethnicity. Statewide, the number jumps to 42% of vaccinations unrecorded.

CrossOver Healthcare Ministry — where 100% of patients are low-income and half are Latino — had only 2.5% of its 1,070 vaccinated patients decline to specify.

Of vaccinations recorded through May, 70% were Latino.

The impact is seen through CrossOver’s dip in patients testing positive. In May, the positivity rate was 14%, which is 5.6 times the state average but lower than figures from December, when nearly a quarter of patients tested were infected.

What helped and what didn’t: Reaching this group depended heavily on methods implemented by community clinics for decades.

This included having Spanish-speaking staff, translated vaccine information and a foundation of trust in these communities, spending extensive one-on-one time explaining their parents’ options and conducting weekend and night clinics to fit with work schedules.

At CrossOver, “we’re asking everyone at checkout,” said Teresa Gonzales, the clinic’s director of operations.

“We’re constantly offering the vaccine. ... Providers talk about it during their visits. People that call the clinic are asked,” Gonzales continued. “It’s a nonstop process.”

CrossOver has also encouraged patients to bring the family members along even if they’re not patients of the health center. At mass sites, that wasn’t an option in the months appointments were required.

Richmond and Henrico’s first walk-in clinic wasn’t until the last week in April.

Deep-seated skepticism of the government, which for many Latinos includes medical care and health departments, meant major vaccination clinics launched for speed shut out many Latinos, said Helen Tanner, a physicians assistant at Daily Planet.

Mass vaccination clinics operated during work hours. Few had signs indicating interpreters were available or that the vaccines were free — and if they did, the signs were in English. And the sites required a registration process that wasn’t working for people without internet access.

In a race breakdown of preregistration in April, numbers showed the majority of people on the wait list were white. The trend was the same in Richmond and Henrico County.

Then there’s the role of immigration status. Community clinics have established themselves as health centers where it wouldn’t be asked. Government entities haven’t.

“Even though they’re not asking about immigration status at these mass sites, the past few years, with people having ICE show up at courts [worsened] that sense of mistrust,” said Tanner, who works at Daily Planet’s South Side location, where about 80% of patients are Latino. “A mass vaccination with a vaccine that they still are not completely sure about is not a particularly attractive prospect.”

In a recent interview, Gonzalez said setting up on-site vaccinations at Latino markets would have made a difference. It still can, she said.

“That’s where they go for a lot of things, you know? To send money to their countries, to pay bills, to buy food or groceries,” Gonzales added. “It’s a one-stop thing for them.”

As demand dips, now what? While mass clinics were vaccinating thousands, community clinics like CrossOver were averaging about 60 per week. They have built up to about 100 since then, when demand outpaced supply. The current challenge is convincing patients who remain skeptical.

The Johnson & Johnson news didn’t help. At CrossOver, the number of no-shows increased to around 60% afterward; at Health Brigade, it was about 20%.

Waller at Health Brigade partially blames how news outlets wrote the initial news that J&J’s one-shot vaccine was being investigated by federal regulators due to six women developing extremely rare blood clots without mentioning that number was out of 7 million doses already given with no effects.

Within weeks, reports from federal officials said the benefits outweigh the risks and distribution continued. Waller has patients who remain doubtful.

“There’s that concern of COVID is kind of seen as something that just happens to you, whereas if you take a vaccine, it’s kind of like if something goes wrong, you’re doing it to yourself,” Waller said. “Some people have a lot of trouble with that kind of mental construct.”

Dr. Kate DiPasquale, a primary care physician at Daily Planet, said the clinic is in a pattern where they call ahead to offer a vaccine to patients and there are as many yeses among Latinos as there are “I need to think about it.”

Her three talking points are to explain how effective vaccines are in preventing infection and offering relief of moving around in public; that vaccines are safe and she’s received both shots; and explaining the symptoms.

Without noting the side effects — which are most commonly a sore arm, headache, chills or muscle aches, though some experience zero symptoms — DiPasquale found how easy it is for people to link the vaccine to giving them the flu or virus and report back to their communities.

Disinformation has run rampant throughout the pandemic in Spanish-speaking communities, largely fueled by false claims shared on WhatsApp or Facebook and said in scientific-sounding words.

“It just can’t compete with ‘Yeah! This vaccine is as safe as we thought it was,’” DiPasquale said.

Waller at Health Brigade has begun knocking door-to-door answering questions and peeking into restaurants to ask anyone wants a dose on the spot. Sometimes, a few accept her proposal. Other times, every dose in her portable vaccine pack goes unused.

It’s OK, she said. She just has to keep showing up.

Drought causes French river to be crossable by foot

Charlotte Crider, a VCU medical student, gives Dale Spratley a COVID-19 vaccine Tues., Jan. 26, 2021. Richmond Health District partnered with the Daily Planet to give the Moderna vaccine to the homeless at the Homeward shelter