Lohmann: 20 years later, a Secret Service agent who grew up in Richmond and worked at the World Trade Center looks back at 9/11
0 Comments
Share this
1 of 2 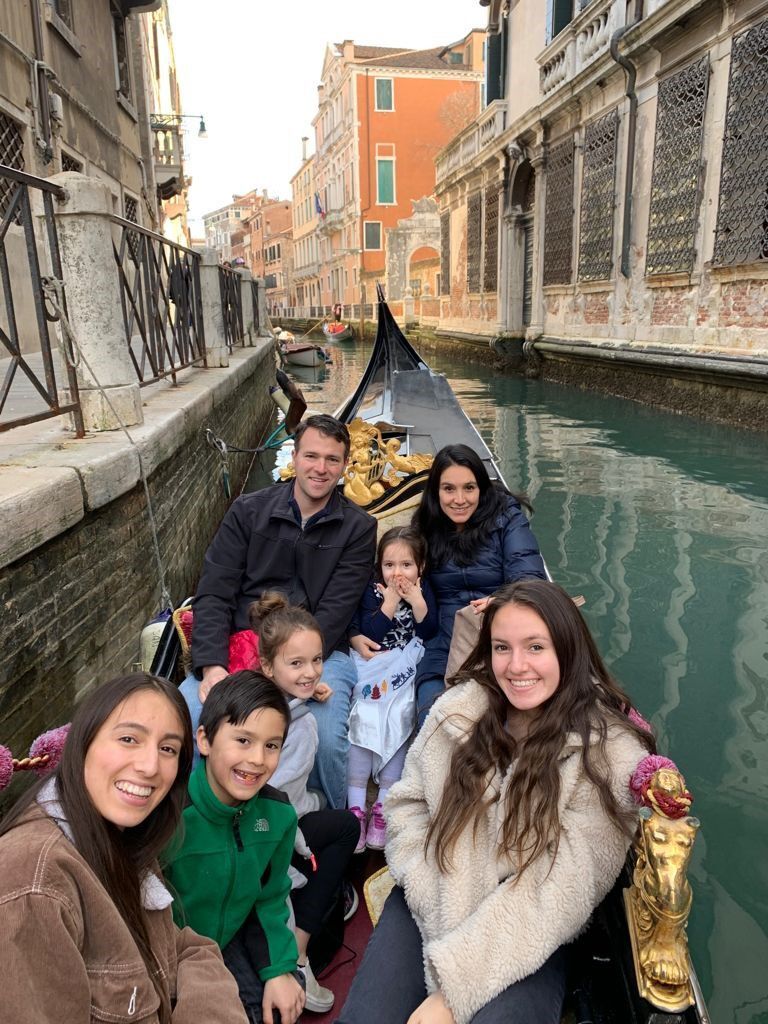 Richmond native Brian S. Lambert and his family on a visit to Venice, Italy. 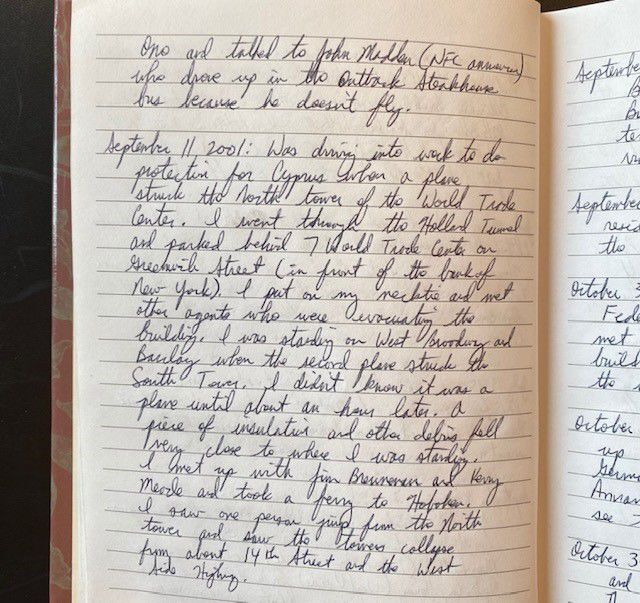 Here is the Sept. 11, 2001, entry in the journal of Secret Service agent Brian Lambert, a Richmond native whose office was in the World Trade Center complex.

On the morning of Sept. 11, 2001, Brian S. Lambert, a U.S. Secret Service agent, heard news of a plane hitting the North Tower of the World Trade Center while en route to his office — which was in the building known as 7 World Trade Center in the WTC complex.

“I was driving through the Holland Tunnel when the first plane struck,” said Lambert, a Richmond native who lived in Hoboken, N.J., at the time, in a phone interview from Italy, where he is now special-agent-in-charge of the agency’s Rome office.

That morning 20 years ago, he was headed to the office to pick up equipment on his way to an assignment at the United Nations headquarters, providing protection for a visiting leader from Cyprus who was to arrive that day.

Access to the underground parking garage at the complex was, of course, closed at that point, so Lambert parked his government-issued car about a block away on Greenwich Street, and met two other agents who had evacuated the building.

In those early minutes, there was little thought of the incident being a terrorist attack. Perhaps it was a small plane?

As they stood at the corner of West Broadway and Barclay Street and Lambert tied his necktie, they heard a second explosion. At first, they didn’t realize it was a second plane hitting the other tower, but whatever the source of the explosion, he said, it set off a panic.

People began sprinting away from the towers. There was screaming. He remembers watching a person fall from high in the North Tower. A piece of building insulation and other debris landed near where he stood.

Lambert didn’t have a cellphone in 2001, but within minutes he managed to find a phone in a nearby deli to call his mother, a schoolteacher, and let her know he was OK.

“Why wouldn’t you be OK?” she asked. He told her to turn on the television.

Like thousands of others merely trying to get out of Lower Manhattan, he headed uptown on foot, and watched the towers collapse from a vantage point on the West Side Highway, on his way to a ferry that would take him back across the Hudson River to New Jersey. With all flights into New York halted, there would be no Cypriot leader to protect, so his assignment for the day was off.

He made it home in time to turn on the TV and watch the collapse of his office building, a 47-story structure that caught fire after being hit with debris from the toppled towers.

It was a lot to take in for Lambert, but though he was only 26 at the time, he already was well-experienced in witnessing some pretty awful things, having served as a Chesterfield County police officer in the late 1990s. He’d made it through those days, he said, as he made it through 9/11.

“The mind has a funny way of protecting itself,” he said.

In September 2001, Lambert was only two years into his Secret Service career. He had grown up in South Richmond; attended Benedictine High School, where he commanded the Honor Platoon his senior year; and then graduated from the College of William & Mary with a degree in psychology. Among his other Richmond credentials: he worked at the Ukrop’s store on Forest Hill Avenue through high school and college breaks.

“He’s just a sharp individual,” said friend and Benedictine classmate Brendan Horan, who also worked with Lambert at Ukrop’s and attended a number of Richmond Renegades hockey games with him.

“He always had a leadership quality to him, and people gravitated toward him in that respect,” Horan said. “Just a good guy. A stand-up guy.”

Lambert worked as a Chesterfield police officer for more than two years before making the move to the Secret Service.

“I loved law enforcement and it was the late ’90s and the economy was booming,” he said. “The USSS was going through a massive growth, and one of my co-workers was just hired and encouraged me to apply. The idea of joining an agency with two distinctly different missions was attractive, as was the chance to see the world.”

The Secret Service, established in 1865 by Abraham Lincoln on the day he was assassinated, was created as a bureau of the Treasury Department to suppress widespread counterfeiting. Its mission has evolved to be two-fold: to protect the nation’s highest elected leaders and visiting foreign heads of state, and to safeguard the nation’s financial infrastructure.

The weekend before 9/11, Lambert had been on assignment with then-Sen. Hillary Clinton, who receives Secret Service protection by virtue of being a former first lady. Her schedule took her to The Dakota, an apartment building near Central Park where John Lennon, a resident, was shot and killed at one of the building entrances in 1980.

While on duty there, Lambert saw Yoko Ono, Lennon’s widow, and met John Madden, whose customized bus pulled up to the building.

Madden was the former professional football coach who became better known as an enthusiastic TV analyst who hated flying so he famously traveled the country in his bus. His primary residence was in California, but when he was working games on the East Coast — as he was that weekend, broadcasting a Rams-Eagles game in Philadelphia — he stayed at his apartment at The Dakota.

“He’s like, ‘What are you guys doing here?’” Lambert recalled Madden saying to the Secret Service agents after he got off the bus.

Lambert’s first assignment after 9/11 was that Friday when President George W. Bush flew in for a visit to the WTC site. Lambert manned the Wall Street landing zone, a downtown heliport, for the president’s arrival.

By the way, the car Lambert had left on Greenwich Street? It was still there the next day when Lambert returned to retrieve it, though it was covered with the ash and dust that blanketed much of Lower Manhattan. They started it and made it as far as one of the tunnels over to New Jersey, when the engine seized up, apparently because of the dust that got into it, and it never ran again.

In the days and weeks following 9/11, Lambert and other agents spent even more time providing protection services in New York. Controlling the airspace also became part of the Secret Service tactical approach as a result of the attacks, he said.

Local agents also were tasked with searching through the debris recovered from their office to make sure certain equipment didn’t fall into the wrong hands.

A lot has changed for Lambert in the years since 9/11. He’s married with five children now. (In 2001, he didn’t know his wife, Esteffanny, but she visited the public observation deck on the 107th and 110th floors of the South Tower only a few days before 9/11.)

For his children, the oldest of whom is a senior in high school, 9/11 is mere history, much like another devastating shock to the national system, Pearl Harbor, was to Lambert and those born after 1941.

Professionally in the past 20 years, Lambert has worked in a field office in Saginaw, Mich.; at headquarters in Washington; and in the presidential protective division for the last two years of the Bush administration and the first two years of the Obama White House.

He moved to Rome where he leads investigative and protective responsibilities for the Secret Service in southern Europe, the Middle East and Africa. Overseas stints are typically for three years, and he expects to return to the U.S. in 2023.

While we were talking, he asked me to hold on, and he went to fetch a journal he was keeping in 2001, in which he wrote about 9/11.

“I haven’t pulled this out in forever,” he said, leafing through it and later sending me a picture of one of the pages. His last entry was 2005.

I asked Lambert how often he thinks about 9/11.

“It’s not a place I like to go, but it’s not a place I’m averse to thinking about it either,” said Lambert, who still has two small, rock-like chunks of the facade of 7 World Trade Center. “I think about it often enough.”

And he always emails an agent who went through the day with him.

“Thinking about you today,” they write each other.

Williams: Virginia once kept Black children out of white classrooms. Now it would keep Black history out.

Once upon a time, Virginia politicians erected barriers to keep Black children and white children from sharing the same schoolhouse.

Richmond native Brian S. Lambert and his family on a visit to Venice, Italy.

Here is the Sept. 11, 2001, entry in the journal of Secret Service agent Brian Lambert, a Richmond native whose office was in the World Trade Center complex. 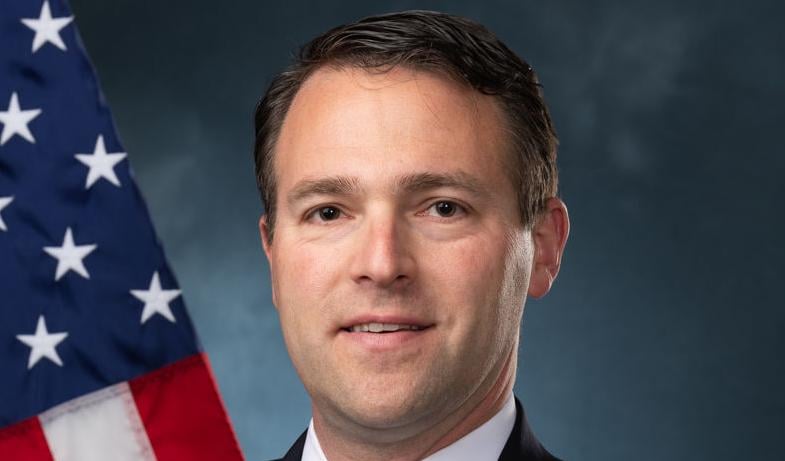