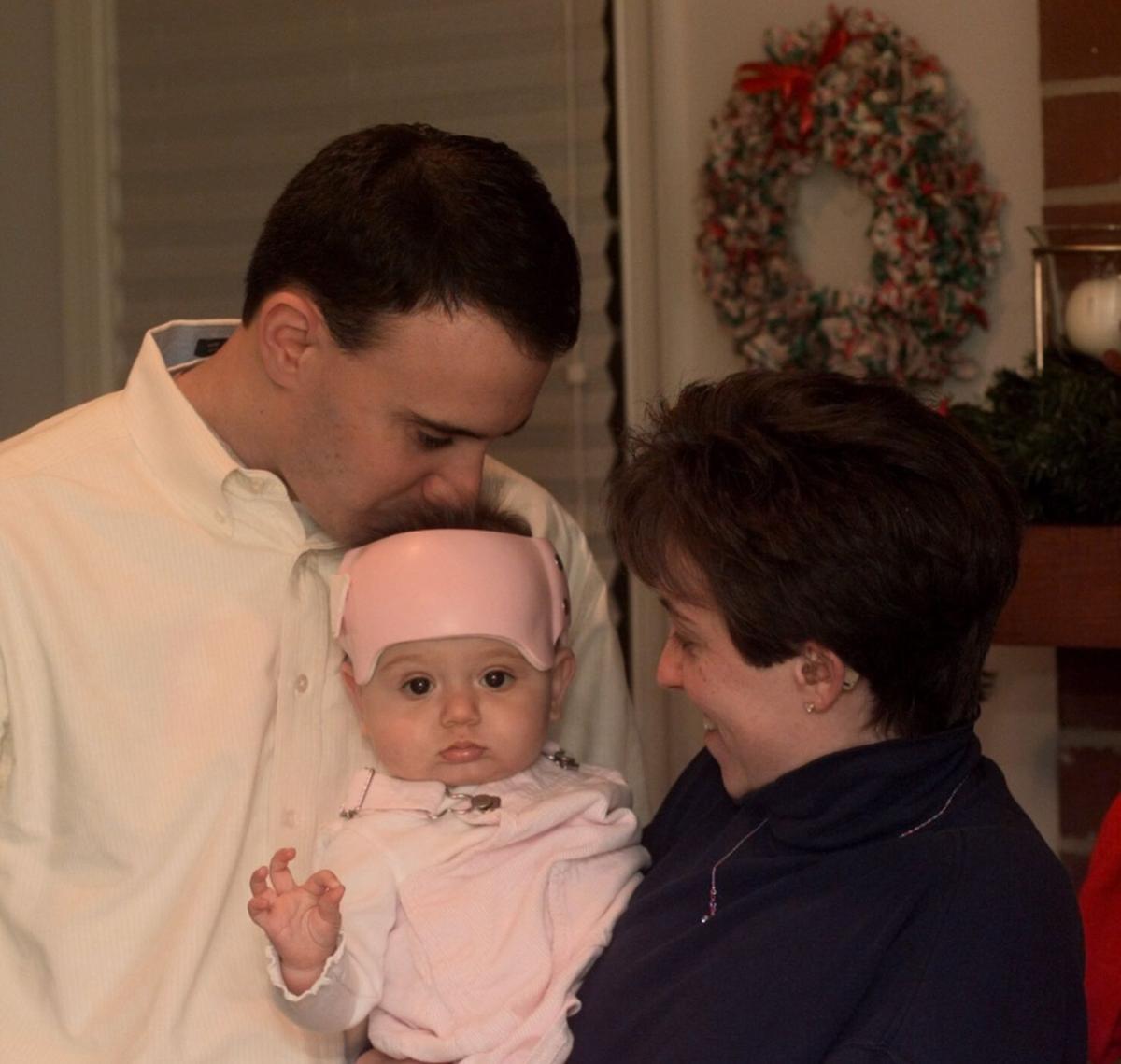 Greg and Maria Provenzo were photographed with their 9-month-old daughter, Emily, in December 1999. 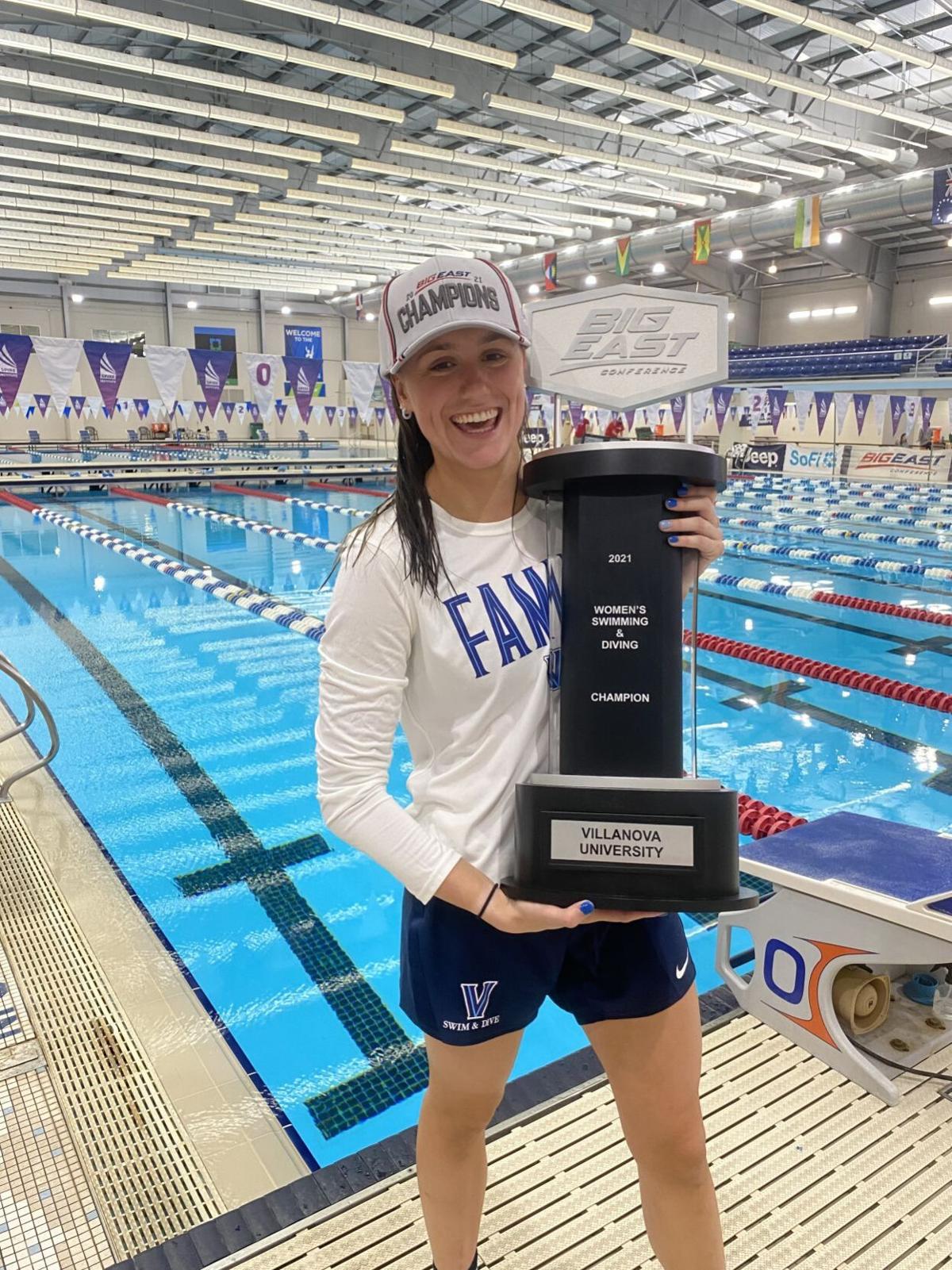 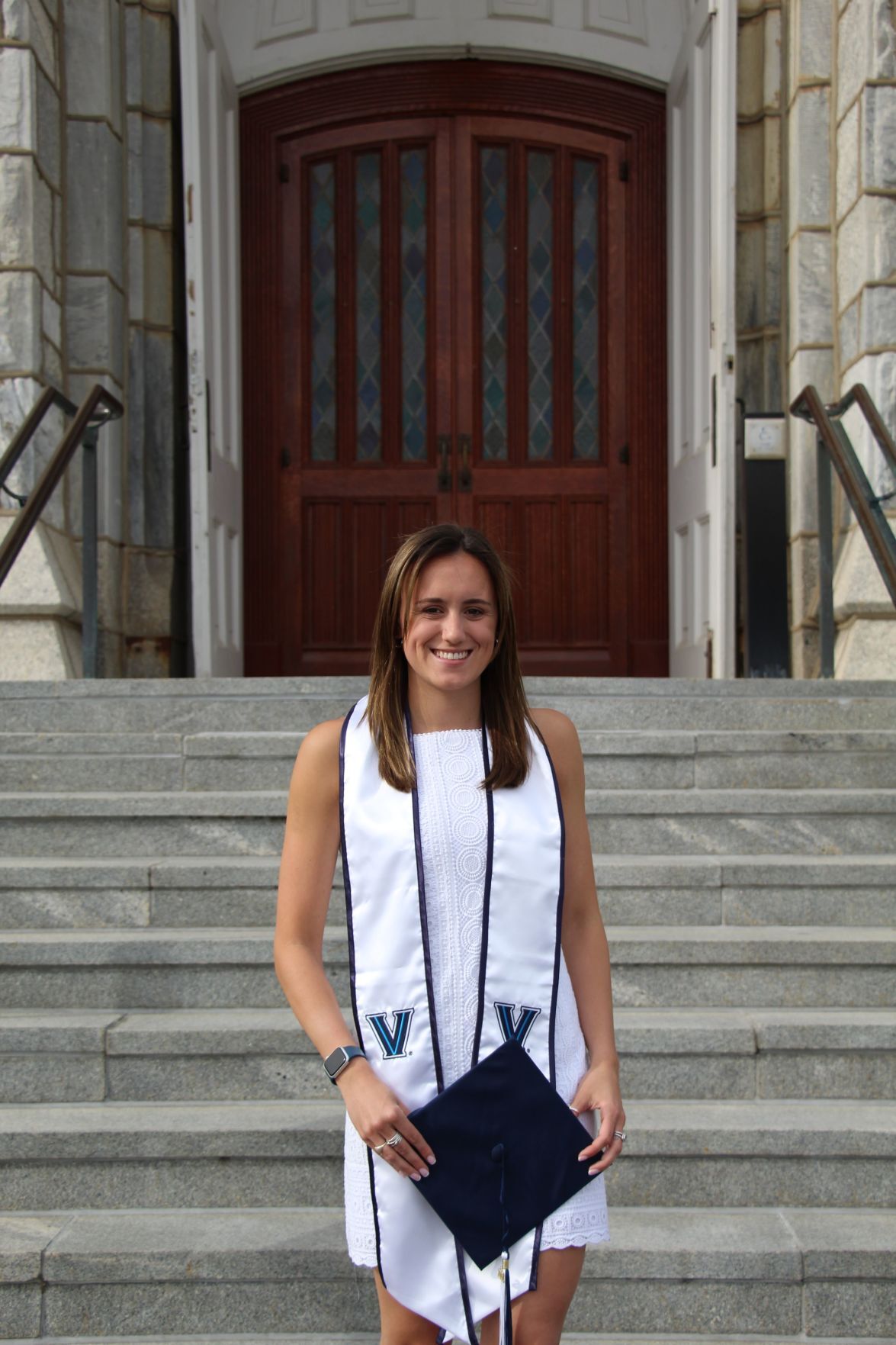 Emily Provenzo, who grew up in Henrico County, attended Villanova University on a swimming scholarship. She majored in communication with a minor in psychology. 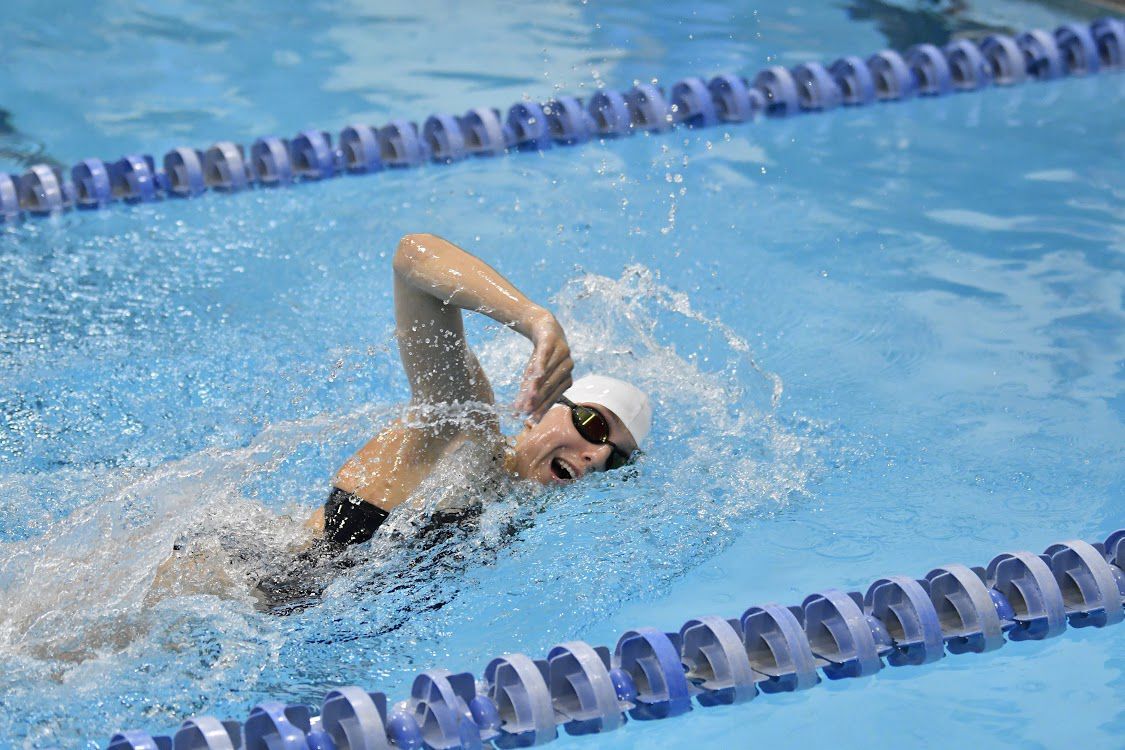 Emily Provenzo helped the Villanova Wildcats to four consecutive Big East titles during her years at the school. 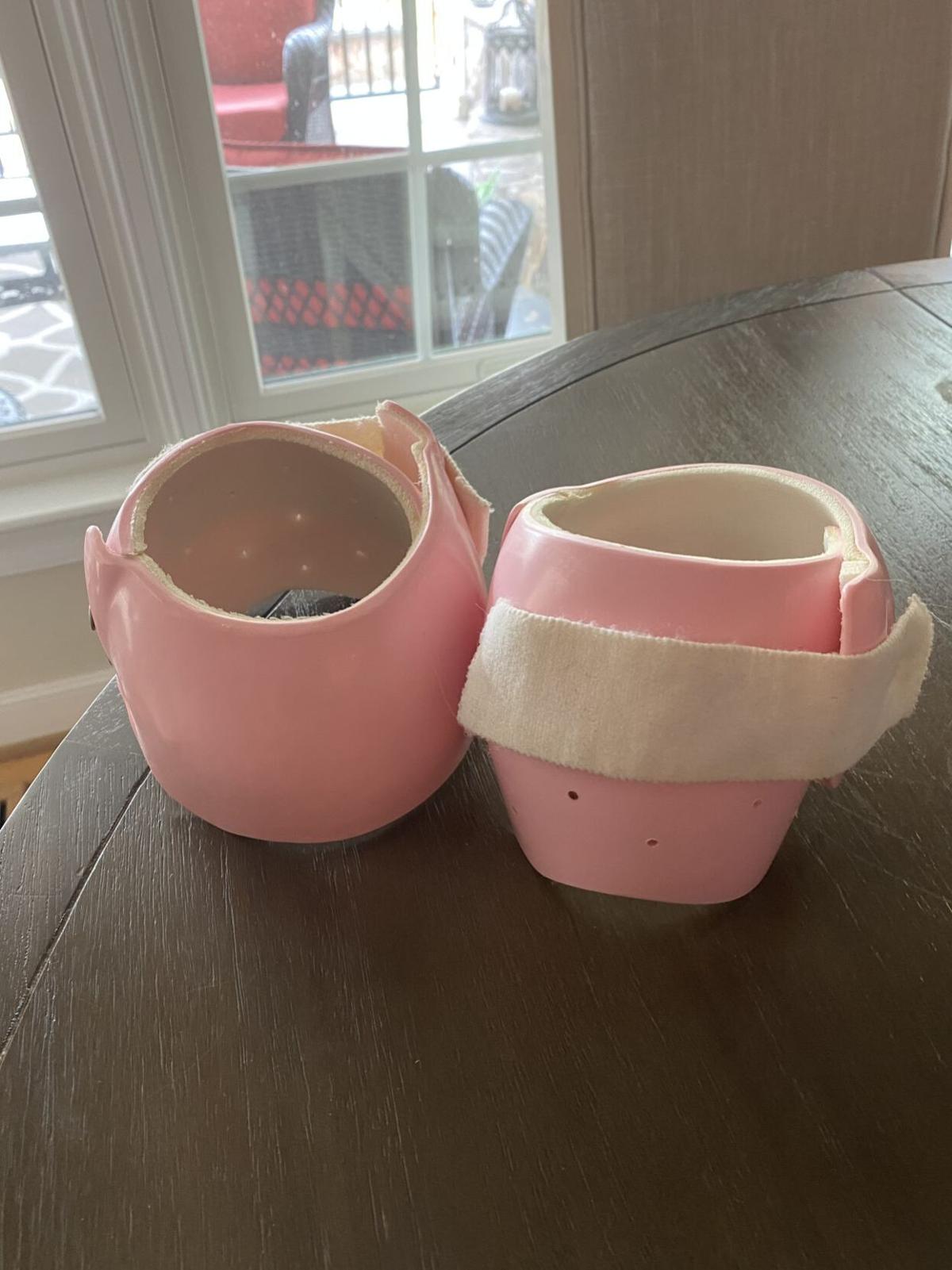 The helmets Emily Provenzo wore for less than a year as a baby to help reshape her skull, which had become misshapen. 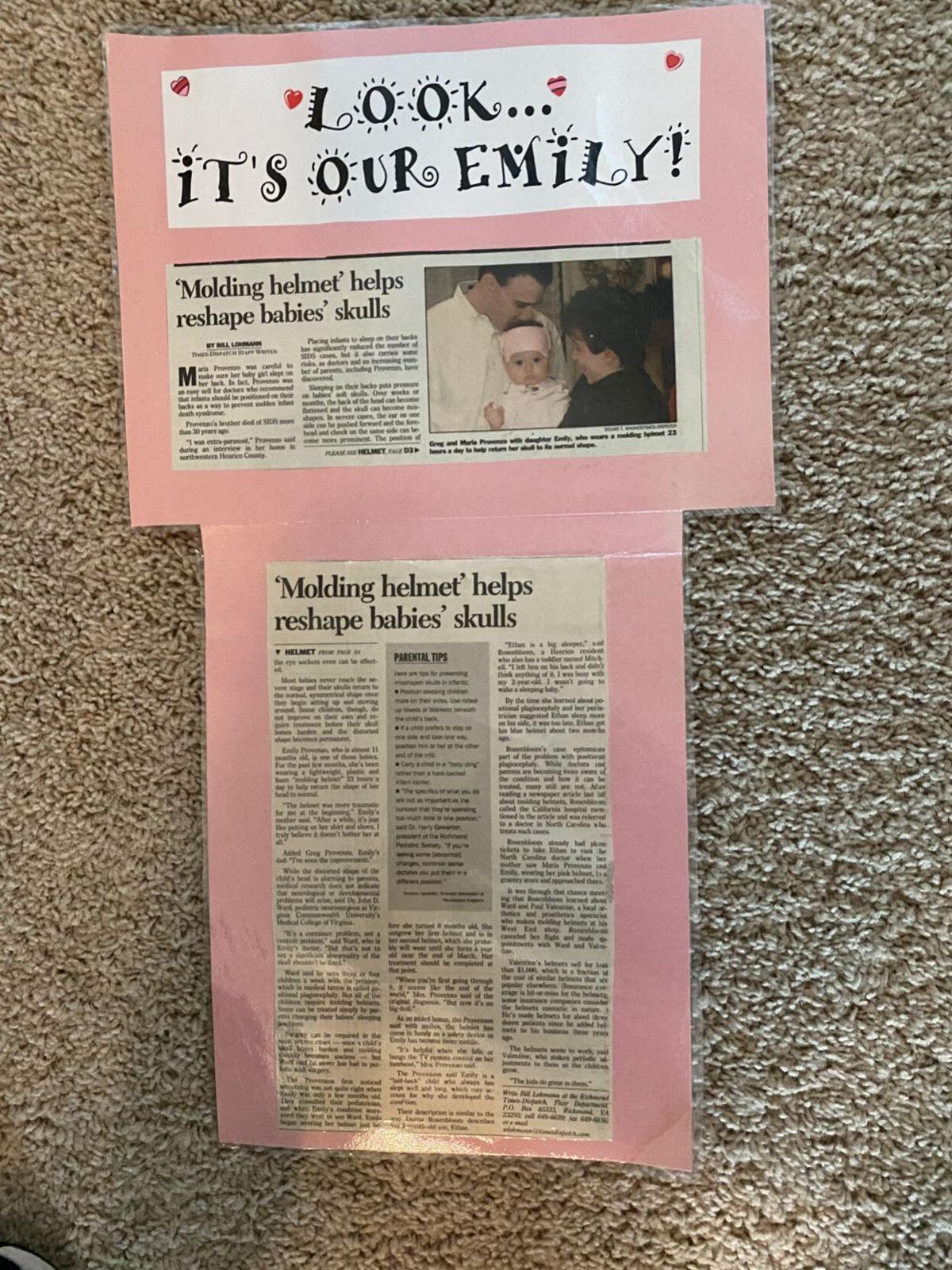 The newspaper clipping of a February 2000 story that Emily Provenzo's parents kept for her.

When I wrote about Emily Provenzo more than 20 years ago, she was not quite a year old, and very much like any other baby except for the pink helmet.

The Henrico County baby wore the “molding” helmet for 23 hours a day because she had developed plagiocephaly, a condition characterized by the flattening of one side of the skull — in her case, the back of her head. The helmet, a relatively new medical approach when I wrote the story in February 2000, was designed to help reshape the baby’s soft skull.

Emily’s neurologist told me at the time that her condition was “a container problem, not a content problem” — as in, the issue was structural not developmental — but for first-time parents, as Maria and Greg Provenzo were at the time, the whole situation was unsettling.

Besides the extreme flatness of the back of Emily’s head, apparently the result of long hours of sleeping on her back, Maria Provenzo recalled that Emily’s eyes and ears appeared to be shifting, as well. For a young mother, the helmet episode was slightly “traumatic,” Maria said back then, and you could absolutely understand that.

Last Friday, Emily, now 22, graduated from Villanova University. She attended on a swimming scholarship and helped the Wildcat swim team win four straight Big East women’s swimming and diving titles. She majored in communication with a psychology minor and is now headed to graduate school at Georgetown University, where she will pursue a master’s in sports industry management.

Her career goal? To work for a National Football League franchise.

“All is good,” Maria said in a phone conversation last week. “You would never know this happened to her. It seemed world-ending because we just didn’t know. Looking back … it was nothing, but at the time, first child, it was like, ‘Oh, my God: Is she going to be smart? Is she going to ride a bike?’ She surpassed all that.”

Or as Emily put it, “I’m completely fine now.”

I mentioned that her mom told me more than 20 years ago that she might have developed the condition because she was such a good sleeper, lying for long stretches on her back, and I asked half-jokingly if she’s still a sound sleeper.

When Emily came along, the national “Back to Sleep” campaign was in full swing, as physicians advised parents to place their babies on their backs for sleeping in an attempt to prevent sudden infant death syndrome. Maria Provenzo’s infant brother had died of SIDS more than 30 years earlier, so she was careful to make sure Emily slept on her back. (Research shows cases of sudden infant death syndrome have declined considerably since the early 1990s when “Back to Sleep” was introduced.)

However, back-sleeping puts pressure on babies’ soft skulls, and misshapen skulls can develop in some babies. Most babies never reach the severe stage and their skulls return to the normal, symmetrical shape once they begin sitting up and moving around. Some children, like Emily, require treatment in the form of the lightweight plastic-and-foam helmets.

Emily wore the pink helmet — and then a second one when she outgrew the first — for less than a year, and when they were removed for good the improvement in the shape of her head was visible. Removing the helmet also set her hair free. Because she wore the helmet so many hours each day, her hair was forced to grow straight up, her mother said the other day, “almost like a Chia Pet.”

Emily seemed a little slow to walk and talk, her mom said, but there is no certainty that was because of the plagiocephaly. Soon enough, she was progressing just fine, or as Maria said, “She hit the ground running, and we never looked back.”

She started swimming at around age 4 and was swimming competitively by kindergarten. She played soccer and field hockey along the way and even basketball for a year.

When she got to high school, she had to choose between swimming and field hockey because of time constraints. Swimming was her choice, and the time constraints were real.

During her years at Saint Gertrude High School, she was in the pool every weekday morning at 4:30 a.m. at NOVA of Virginia Aquatics. She had additional practices two weekend afternoons a week after school, plus a Saturday practice that began at 5:15 a.m.

I was gasping audibly in empathetic exhaustion as she rattled off her schedule.

She was a 2017 Richmond Times-Dispatch scholar-athlete of the year representing Saint Gertrude.

She excelled in the strong swimming program at Villanova. The Wildcats have won eight consecutive Big East titles, including during Emily’s four years, the most recent coming in April. She was All-Big East as a senior (500-yard freestyle) and as a sophomore (1,650-yard freestyle) and was on the conference’s all-academic team in 2018-19.

She was team captain as a junior and senior.

“I loved every year,” said Emily, who has a younger sister, Regan, who graduates from Deep Run High in June. “I made lifelong friends. I wouldn’t change anything. It was a great experience.”

Her parents, of course, are proud of all she’s accomplished after a somewhat worrisome beginning.

Over the years, whenever she’s seen a baby in such a helmet, Maria said she’s gone up to the parents and assured them, “It’s OK. Don’t worry.”

I asked Emily how long she’d been aware she was featured in the newspaper, pink helmet and all, as a baby.

“Basically, my whole life,” she said. “My parents laminated the article, and they showed me when I was younger. I thought it was so cool.”

She also thought it would be cool to have the original photo republished. After all, she keeps a similar photo of her baby self wearing a helmet on her phone, which she’s happy to share.

Greg and Maria Provenzo were photographed with their 9-month-old daughter, Emily, in December 1999.

Emily Provenzo, who grew up in Henrico County, attended Villanova University on a swimming scholarship. She majored in communication with a minor in psychology.

Emily Provenzo helped the Villanova Wildcats to four consecutive Big East titles during her years at the school.

The helmets Emily Provenzo wore for less than a year as a baby to help reshape her skull, which had become misshapen.

The newspaper clipping of a February 2000 story that Emily Provenzo's parents kept for her.