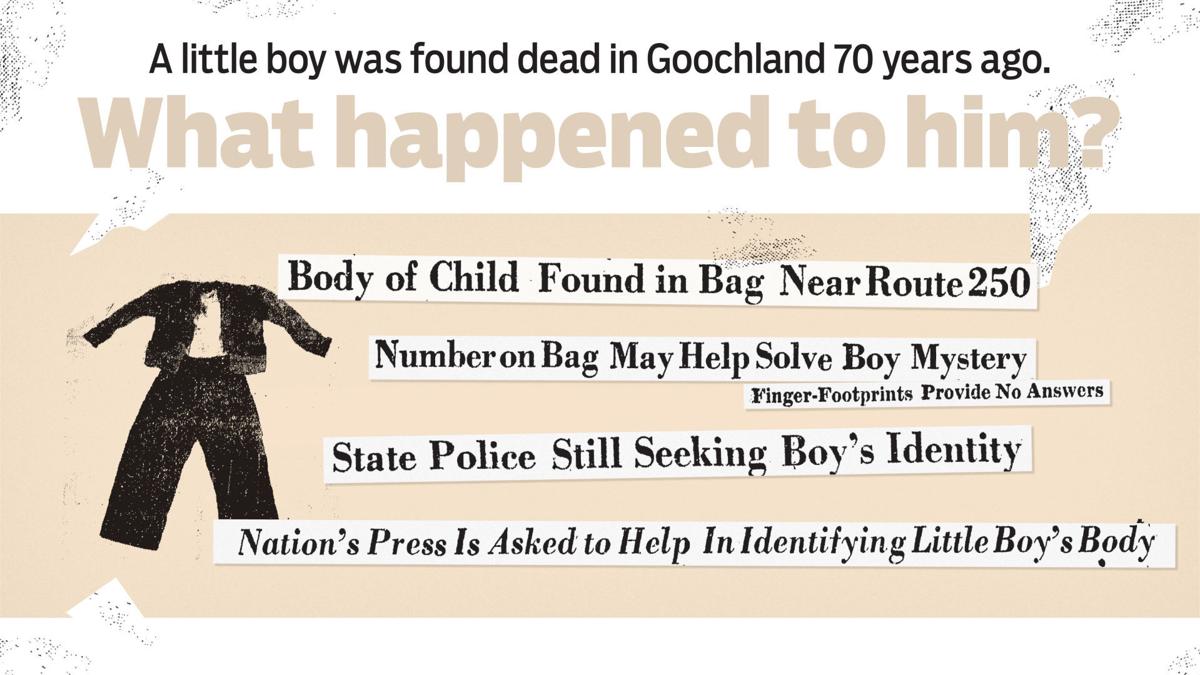 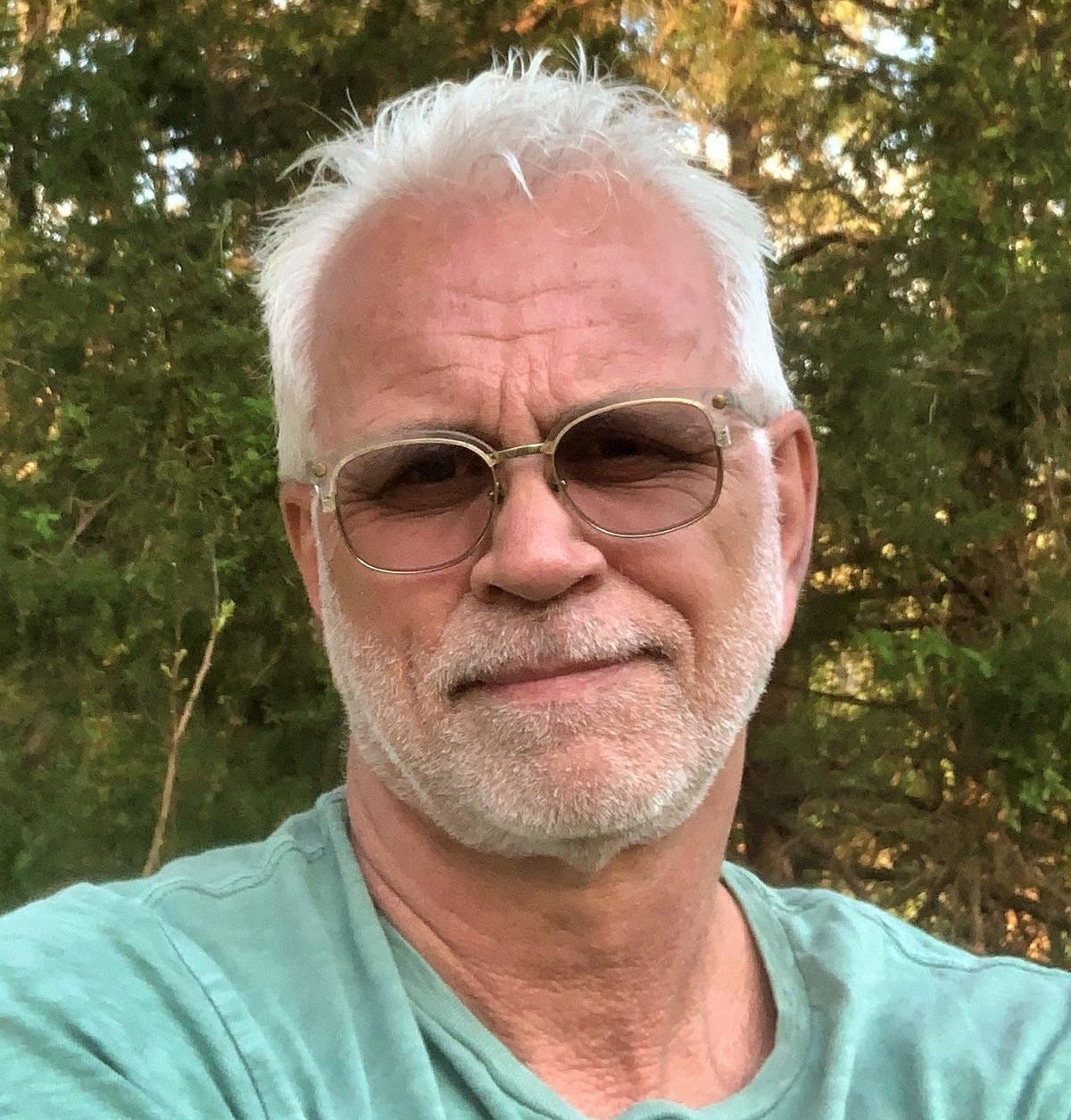 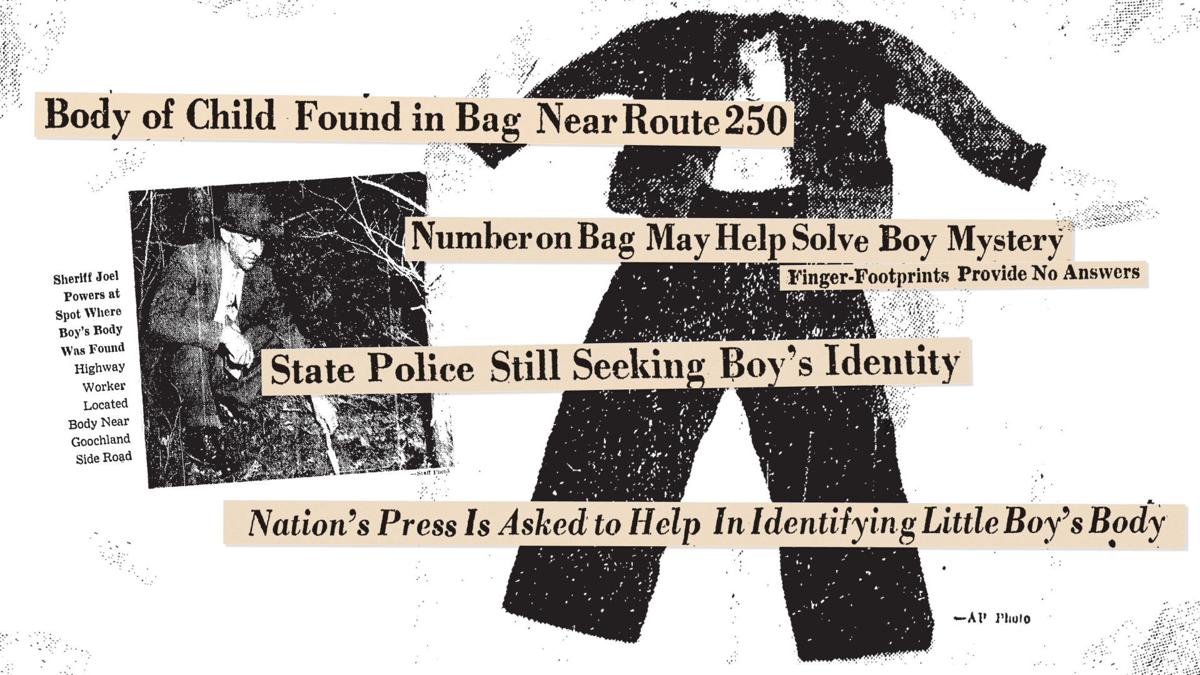 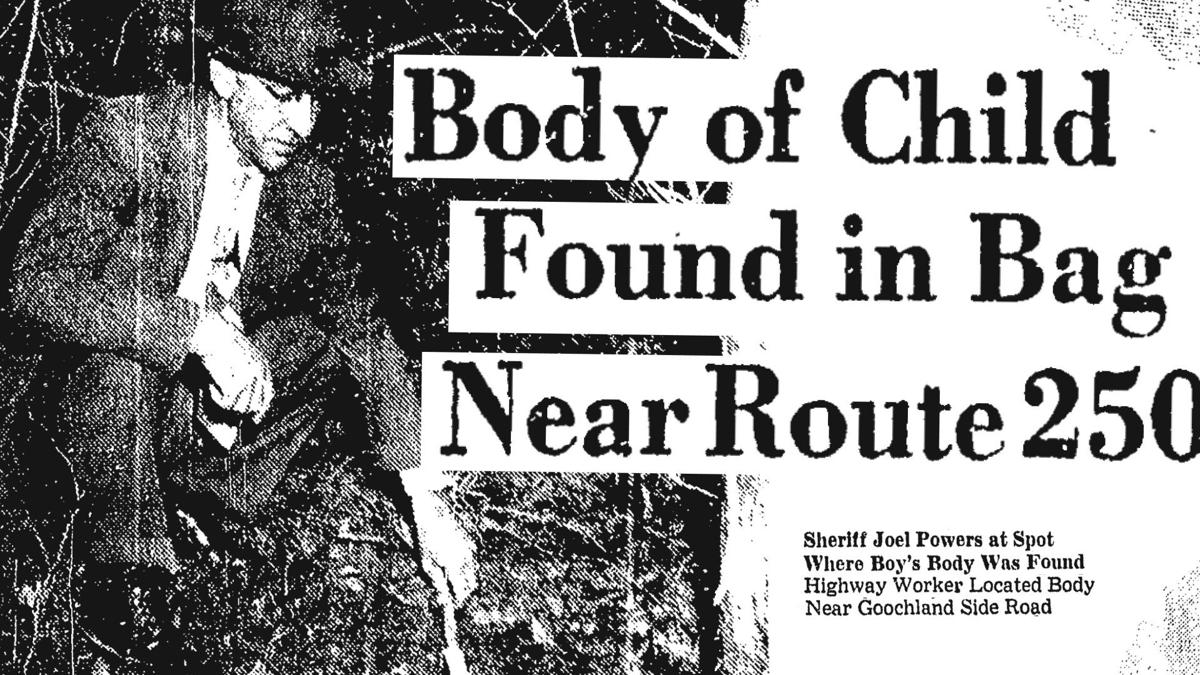 Seventy years ago, a highway worker on a crew cleaning litter from roadside ditches in Goochland County came upon a most gruesome discovery: the body of a young boy stuffed in a duffel bag.

The state medical examiner believed the boy to be 5 or 6 years old and estimated he had been dead for about a week, though at the site for a much shorter time, when he was found March 5, 1951, a few feet from state Route 670, just south of U.S. 250, near Oilville.

According to law enforcement reports, the boy was wearing blue jeans; a striped T-shirt; and red, white and blue socks, but no shoes. He wore a cardigan sweater. Size 4. The bottom button on the sweater didn’t match the others, leading to speculation, noted weeks later in a March 30 story in the Richmond Times-Dispatch, that “somebody had thought enough about this boy to sew a button on the sweater for him.”

The case attracted considerable attention from law enforcement and news media, but it was never solved. The boy was never identified, and the official cause of death — if one were determined — was never announced publicly. No one seems to know where the child’s remains were buried.

In the realm of cold cases, this one is downright frigid and totally forgotten.

Almost. “The more I started looking into it,” Dale Brumfield says, “the more heartbreaking and fascinating it got.”

Brumfield is a local journalist and author who sifts through history to find many of his topics. “Cultural archaeology” is a phrase he uses to describe some of his work.

For the most recent of his 11 books, “Railroaded,” Brumfield, an anti-death penalty advocate, researched the stories of the first 100 people executed in Virginia’s electric chair. For a 2010 story, he helped uncover a copy of the long-missing “Rock ‘N’ Roll Hotel” movie, which had been filmed in Richmond in the 1980s but had been shown only once and then had disappeared for more than two decades.

He has researched and written about what might be contained in a time capsule in the pedestal of the Robert E. Lee monument on Monument Avenue. (He has reason to believe it might contain a rare photograph of the body of Abraham Lincoln in his coffin.)

“I’m usually pretty good at ... resolving mysteries,” he said. “But this one I cannot resolve.”

The more he’s looked into this case, the more it’s turned into something of a quest for him. Not just to learn the answers, but to do something. He wants to find out where the boy’s remains are interred and raise funds to purchase a grave marker.

“I want some kind of remembrance because nobody at age 5 should die like that,” he said.

He wrote a lengthy piece about the case on Medium.com and contacted me hoping to give the case a little amplification and to see if anyone knows anything.

Brumfield stumbled on the case about four years ago as he dug through microfilm at the Library of Virginia, researching another story that had sent him back to 1951 newspapers.

“You know how it is when you read a headline and read the lead and say, ‘You know, I think there’s something to this,’” he said. “I started calling people, started emailing people, driving out to Goochland to try to find anybody who could remember anything about it. It was like this little child fell off the map after the first year.”

Indeed, Brumfield found a number of stories about the case in The Times-Dispatch and other papers around Virginia and even the nation, as efforts were made to link the boy with other missing children. Nothing panned out.

Investigative leads fizzled; news coverage ceased. No one ever claimed the boy.

“It’s one of the most frustrating things I’ve encountered,” Brumfield said. “I just don’t understand. How could a child drop off a map like that?”

Using phone calls, emails and Freedom of Information Act requests over the past four years, Brumfield followed up with local law enforcement agencies, the state medical examiner’s office and the FBI. He poked around on Ancestry.com, chasing theories about possible connections to certain families whose names had come up in investigations at the time. But he came up dry. He learned from The Doe Network, the International Center for Unidentified & Missing Persons, the boy was never listed in any missing persons database.

A missing persons investigator suggested to Brumfield that it’s possible the victim was a poor child whose birth was never recorded, who was not known by relatives or neighbors, and who could have been disposed of without anyone ever knowing he existed. “Almost too sad to comprehend,” Brumfield quoted the investigator saying.

A June 1951 Times-Dispatch article quoted a state police investigator saying the case remained a mystery, noting that if the boy was not identified within a year, his body would be cremated and his ashes kept by the state for five years. If there was still no identification, the ashes would be buried in a local cemetery. There are no records to indicate if that burial occurred or where.

I checked with the Goochland Sheriff’s Office, which said it no longer has the case files in its records. The state police also couldn’t find any records, The medical examiner’s office did not respond to my inquiries.

I asked a well-connected friend in Goochland to put out feelers among his contacts to see if anyone had any memory of the case or might know something. He did, but came up empty. “Lots of curiosity,” he replied. “Just too far back.”

Brumfield is discouraged but not defeated. He remains on the lookout for anyone who might know something about the case (email Brumfield if you do: dalebrumfield@protonmail.com). He would love to help find some resolution to the case — and a proper memorial for the boy.

“Any child deserves better than what this child got,” he said. “That’s what drives this whole thing. I just feel bad for him.”

If you have any information about this case, email Dale Brumfield: dalebrumfield@protonmail.com