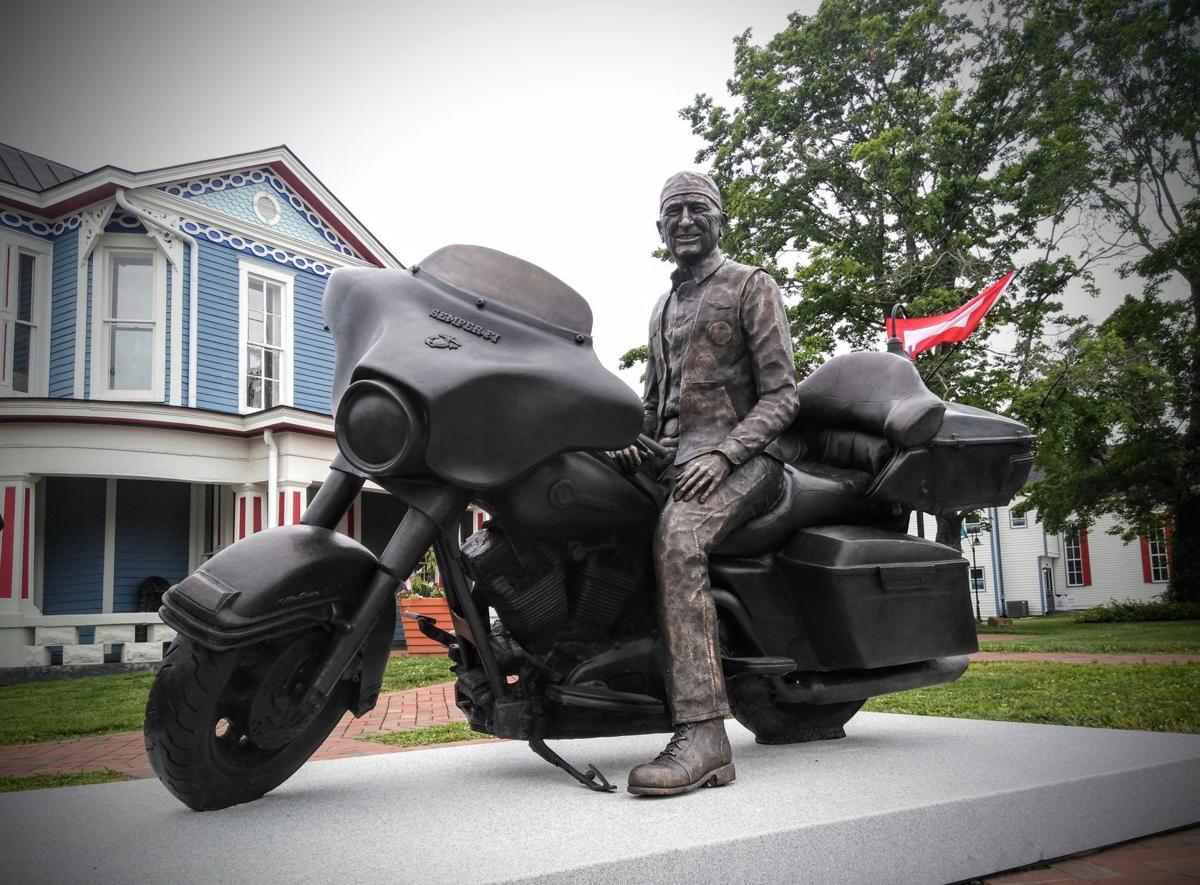 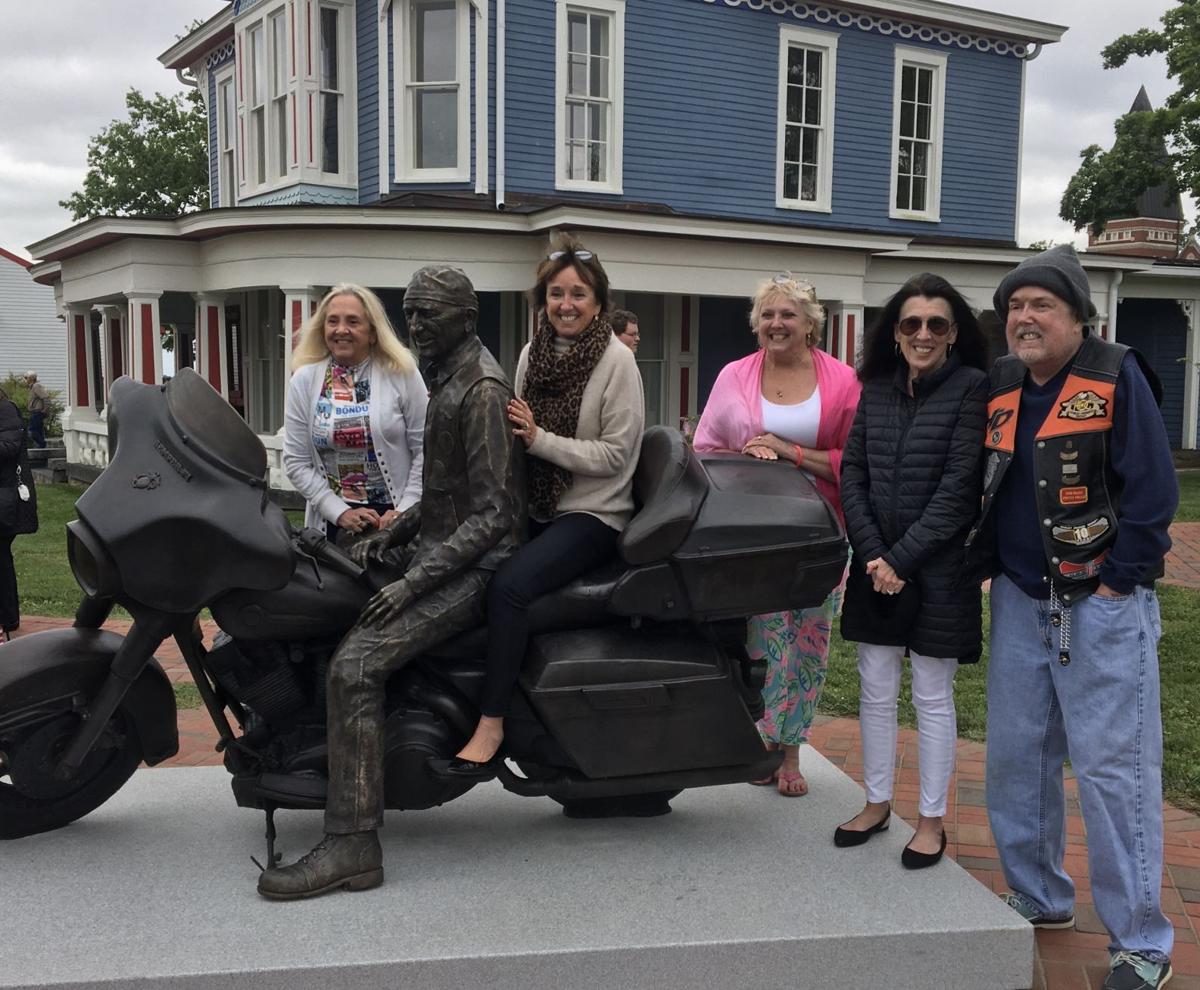 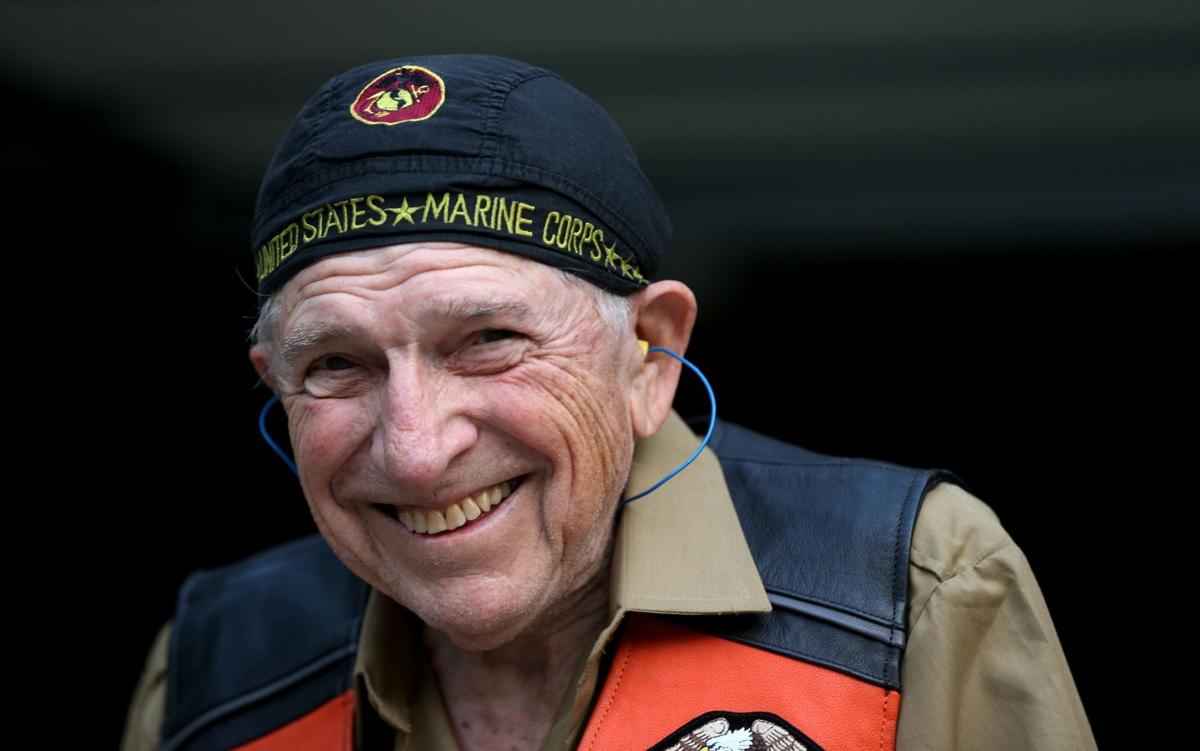 Heilman, who died in 2019, rode his motorcycle across the country to call attention to the dwindling number of WWII vets. 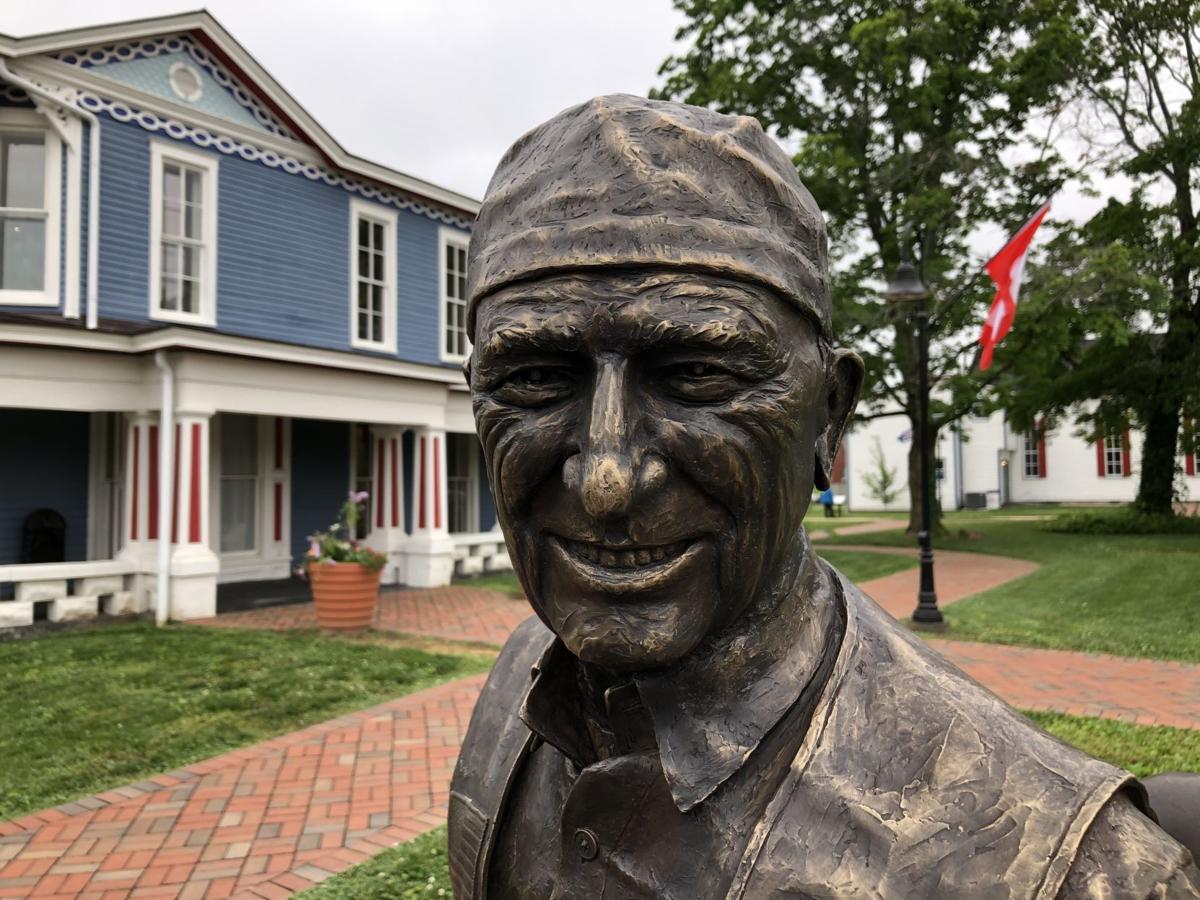 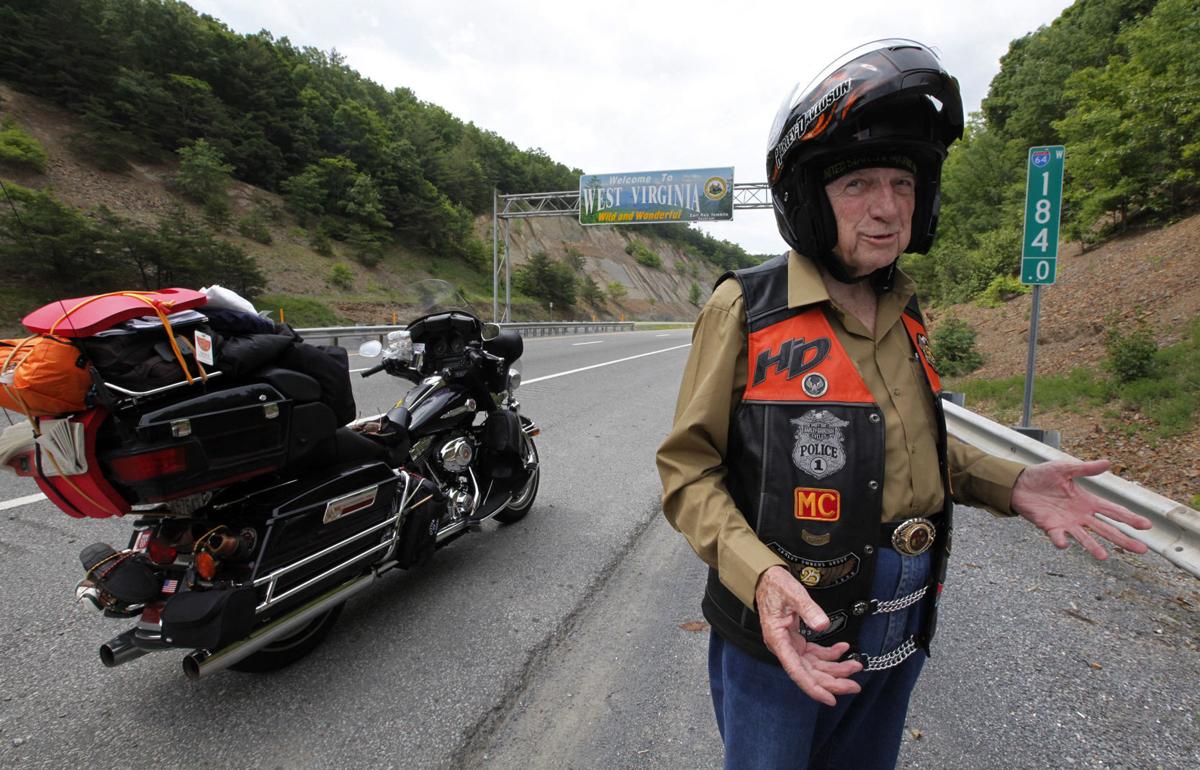 Dr. E. Bruce Heilman, 87, then-chancellor and president emeritus of UR, stopped his Harley-Davidson Electra Glide Ultra Classic (Patriot Edition) on Interstate 64 at the Virginia-West Virginia line on his way to Alaska in 2014. Heilman died Saturday; he was 93.

When E. Bruce Heilman was a kid growing up on a farm in Kentucky, a big time for his family was going into town on Saturdays.

The town of La Grange, about 15 miles from where Heilman would arise at 3 a.m. to milk the cows, had a population of only about 1,000 in the 1930s and 1940s before Heilman went off to war. La Grange is much larger now — with a population approaching 9,000 — but you could make the case it remains a big time for the Heilmans on Saturdays — at least last Saturday, when the Heilman family, friends and area residents turned out to the Oldham County History Center in La Grange to celebrate the unveiling of a new statue of Heilman astride his Harley-Davidson motorcycle.

“The Road Warrior,” as the statue is called, pays tribute to Oldham native Heilman, who served as a Marine in World War II, but also is intended to honor the service and sacrifice of all WWII veterans. Heilman is the perfect face for that effort, as in his later years he crisscrossed the country on his Harley, calling attention to the dwindling numbers of his fellow WWII vets.

“It was a wonderful weekend,” said Bobbie Heilman Murphy, one of Heilman’s five children who were on hand for the festivities, which had been delayed twice by the pandemic. Those in attendance included more than 30 motorcyclists from several states, Murphy said, and La Grange’s mayor, John Black, led a procession down Main Street, riding Heilman’s Harley-Davidson Electra Glide Ultra Classic (Patriot Edition), which has been in storage since Heilman died in October 2019 at age 93.

“It never occurred to any of us that he would not be here,” Murphy said of her father, who led a life of remarkably good health and finished a ride on his Harley from Kentucky to Richmond only a month before his death. Soon after, he was diagnosed with bone cancer, and he died about two weeks later.

He also expected to be at the statue unveiling. His last email to me, which arrived before his cancer diagnosis, filled me in on what he had been up to with his characteristic enthusiasm and invited me to attend the originally scheduled ceremony in La Grange, which was then still more than eight months away.

He liked to plan ahead.

Heilman was mighty proud of the statue, and he had worked with the sculptor, Wyatt Gragg,who lives in the La Grange area and also happens to ride a Harley.

“He knew Dad well,” Murphy said of Gragg, noting the details of the statue show it. “It’s just amazing. He really did capture the nuance.”

The day of the ceremony was cool and windy, but the moment was just right, Murphy said. La Grange is a place where train tracks run down the middle of Main Street (and a train did indeed arrive during the event). Commemorative do-rags, similar to the ones Heilman used to wear on his rides, were handed out.

“He was so proud and honored they were going to do this,” Murphy said. “I think he would have been tickled pink. I think he and Mom were up there smiling down on us.

“And I think he was chuckling a little bit, to think a farm boy from Kentucky would have a statue erected for him.”

Heilman used to joke that he grew so weary of those early-morning wake-up calls to milk the cows that he enlisted in the Marines “so I could sleep late.”

The poor, scrawny high school dropout made it to the Pacific theater just before the end of the war. He turned the experience into a launching pad for the rest of his life, returning to his education and then some, eventually finding his way into administrative positions in higher education, including the University of Richmond, where he was hired as president in 1971, retired in 1986 and returned on an interim basis in 1987. He served as chancellor until his death, and — gregarious, earnest and persuasive — there was no better ambassador for the university.

He found a second act of his life after Betty presented him with a motorcycle for their 50th wedding anniversary, figuring he was old enough. In finding his youth again — he had given up his bike when he was building a career and raising a family — Heilman rode all over the country as a spokesman for WWII veterans, speaking to anyone who would talk to him — from large groups to diners at Cracker Barrel.

He loved that people came to know him as “Motorcycle Man.”

He lost Betty, his wife of 65 years, in 2013, but he kept going, trying to squeeze as much from every day as he could. His appointment calendar proved that.

“I set up several opportunities for him to meet high school and college students,” said Nancy Stearns Theiss, executive director of the Oldham County History Center. “We filled the Oldham County High School auditorium to capacity — kids were standing in the aisle. That was when Bruce seemed the most happy — the youthful audience was his target audience — the kids loved him, and he loved them.

“The idea of the motorcycle was to draw attention to the vitality of the Greatest Generation. It wasn’t just about Bruce, as he and I discussed, but presented a way to depict these soldiers as survivors that not only sacrificed for a terrifying war, but soldiers who after the war took advantage of education and created opportunities that helped strengthen our country.”

With the statue, Heilman is still telling the story he told for so many years.

And that’s not all: Kentucky’s Campbellsville University, from which Bruce and Betty Heilman graduated, is constructing a Heilman Welcome Center. When it’s completed in late 2022 or early 2023, one of the featured pieces will be Heilman’s motorcycle, in a glass case on the second floor.

“You’ll be able to see it from outside,” Murphy said, “and inside it will be a meeting place for students: ‘Meet me at Bruce’s Harley.’ ”

Heilman, who died in 2019, rode his motorcycle across the country to call attention to the dwindling number of WWII vets.

Dr. E. Bruce Heilman, 87, then-chancellor and president emeritus of UR, stopped his Harley-Davidson Electra Glide Ultra Classic (Patriot Edition) on Interstate 64 at the Virginia-West Virginia line on his way to Alaska in 2014. Heilman died Saturday; he was 93.