UPDATE: Soaking rain is lingering across central Va. this afternoon. So are the flood risks.

Lohmann: How one man discovered his Black family's blond-haired, blue-eyed relation -- and a Richmond story worth telling
7 comments
Share this
Only $5 for 5 months
1 of 3

John Thomas “Tom” Lewis, who was born in 1890 and lived mostly in Richmond, was biracial. He appeared to be white but lived his life as a Black man.

In a 1938 family photo, (from left) Andrew and Alma Hocker -- Zachary Hocker's grandparents -- are shown with Bessie and Tom Lewis. The Lewises provided the lot on which the Hockers built their home in Henrico County. 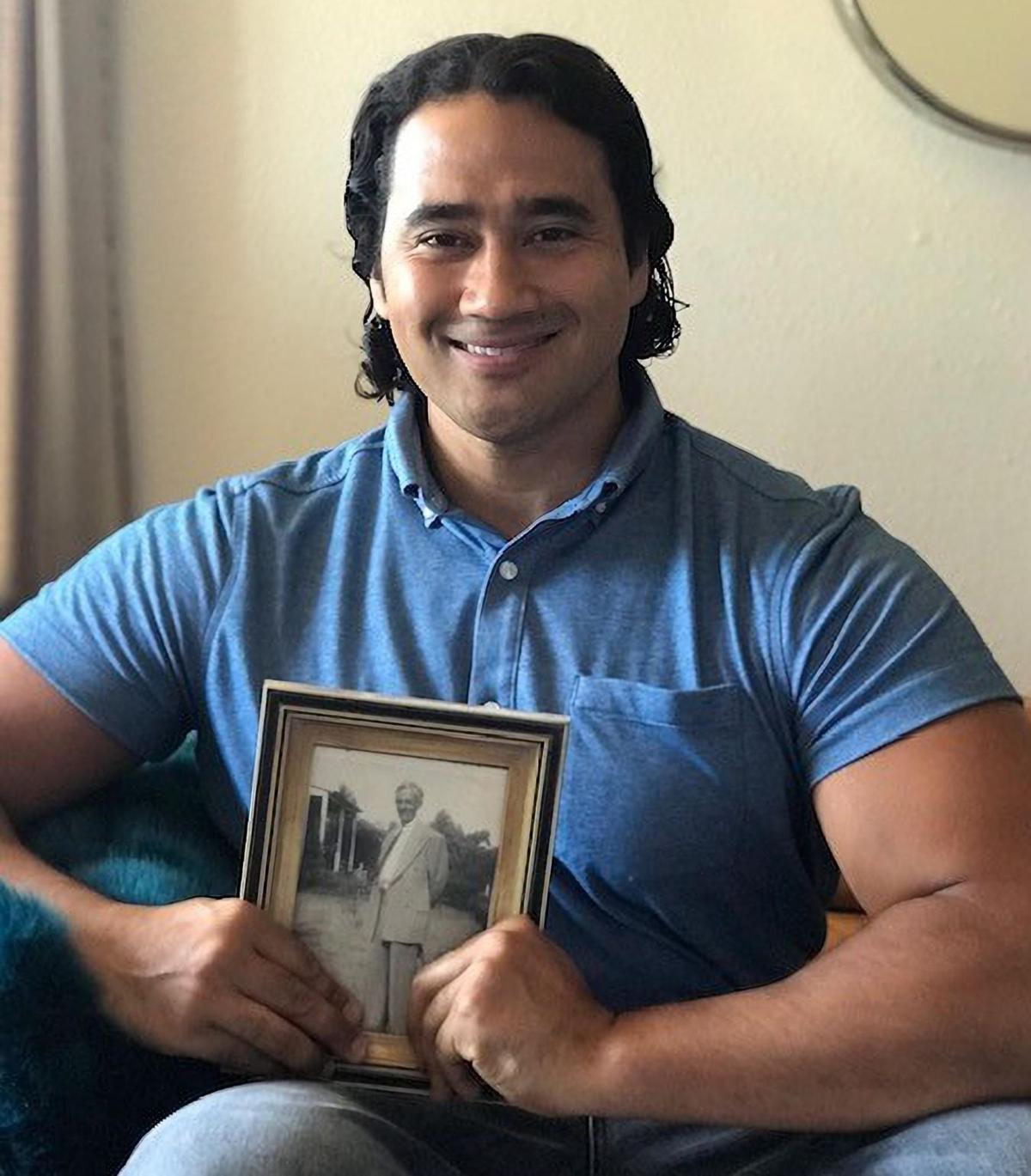 Zachary Hocker of San Jose, Calif., holds a 1953 photo of his great-great-uncle, a biracial man who lived most of his life in Richmond.

After graduating from college and traveling the world, Zachary Hocker returned home to California to help care for his ailing father. He grew up in the house, but there were things about it he never really paid attention to: such as the old fuzzy, black-and-white photograph in a gold frame on a wall in the family room.

The picture, among many others on the wall, had never caught his eye until one day a few years ago. Upon closer inspection, Hocker recognized the house in the background as his grandparents’ home in Henrico County. But he had no clue about the man, a lanky white man with straight, light-colored hair in a suit. Why, Hocker wondered, was this man standing in front of the home of his grandparents, who were Black? And why was his picture hanging on their wall?

Hocker asked his father about the man. The short answer: It was John Thomas “Tom” Lewis, who lived most of his life in Richmond and was Zachary’s great-great-uncle.

“He’s usually a very stoic man,” Hocker said of his father, Andrew James Hocker Jr., who grew up in Henrico, “but when we finished talking about Uncle Tom he was crying because he meant so much to him and his family.”

That conversation launched Hocker on a quest to find out more about Lewis, leading him to discover a man, born in 1890 and dead long before Hocker was born, with a little-known story that “challenges the idea of what race is.”

Hocker, 37, sent an email recently, telling me about his family and, in particular, his great-great-uncle. Lewis was born in Buckingham County, his mother having been raped by a white man, according to family history. Despite a lifetime of ambiguous racial identity that led to ill treatment and unhappiness, he managed to serve his country in World War I, carve out a successful career as a brick mason and leave a lasting impression on those who knew him best. Hocker thought Lewis’ story might resonate at a time when race and racism are at the forefront of America’s consciousness.

“I think his story deserves to be told to a wider audience,” said Hocker, who has written a manuscript about his family he hopes to have published.

Hocker, a graduate of Yale University, grew up in California’s Silicon Valley. An anthropology major, he traveled widely during and after college — Italy, Cuba, China, India, New Zealand, among other places — learning languages and customs and coming to this conclusion: “I just realized we’re all people.”

Back at home a few years ago, having returned to help his father, he found the photo of Lewis, removed it from the wall and on the back found a few notes about Lewis written by his father’s older sister, Annette Hocker Bradley, who was considered the family historian. Hocker turned to her in the final stages of her life — she had been diagnosed with cancer — for details about Tom Lewis.

In 2017, he recorded long-distance, cross-country phone interviews with Bradley, who lived in New Jersey. She also passed along a notebook filled with family details. She died in 2018 at age 83.

“Annette gave my life purpose,” said Hocker, who shared the interviews with me. I also spoke with another aunt and uncle who still live in Richmond and who had memories of Lewis.

“I was lost, and I possessed no clearly defined goals. It was as if I had writer’s block in deciding what to write for the next chapter in the story of my life. Since she spent the last year of her life telling me about Uncle Tom and our family’s history, I believed that it was my obligation to keep this story that she kept alive until she passed away and passed it on to me.”

And there was something larger in what Bradley did, Hocker said.

“Slaves were punished for reading and writing, therefore many of our stories and history were passed on through oral tradition, and that is what my Aunt Annette did for me,” he said. “Without Annette, the lives of our ancestors would have been forgotten like many African American stories and histories have been.”

Lewis could — and did — pass as a white man with blond hair and blue eyes, but he was listed as Black in military and census records and lived his life as a Black man. His physical appearance was the result of not only his parentage but also his mother’s, Bradley told Hocker. Lewis’ mother, Ida, was the daughter of an enslaved woman in the years leading up to the Civil War who became pregnant after being raped by the white landowner, an appallingly routine occurrence in the era of slavery.

Bradley told Hocker that Ida, as a young teen, was sold by the jealous wife of the landowner and wound up as a caretaker for a widowed American Indian in Buckingham County. After the Civil War, she married the man, Charles Lewis, and had several children with him, though Tom Lewis was the result of a rape.

Because of his fair complexion and his origins, Tom Lewis grew up feeling like an outcast, in some instances within his own family, Bradley said.

“He had a very unhappy life in a sense,” Bradley said when she talked to her nephew. “Because he didn’t fit in either world. He was raised in a Black world, but he had the white look.”

Lewis didn’t attend school beyond the seventh grade, according to census records. At some point he came to Richmond, and in 1911, according to public marriage records, married a Black woman, Bessie Davis.

He was among the 200,000 Black Americans who served in World War I and were shipped overseas. For those Blacks who hoped their military service would ease segregation back home, they must have been bitterly disappointed upon their return by the lack of societal change.

Straddling the racial divide, Lewis endured continuing indignities as he went along.

His great-nieces recalled stories of Lewis riding in the back of streetcars with his dark-skinned wife and other Blacks — and being chastised by authorities and ordered to move to the front of the streetcar with the other white passengers. He would explain “This is my wife,” his family said, to no avail. The experience motivated him to purchase a car.

Once on a construction site, Bessie brought Tom his lunch. White co-workers joked to Tom — thinking he was white like them — about his “slave” or “maid” (depending on the telling) bringing him a meal.

“Uncle Tom just put his trowel in his bag and walked away instead of taking that type of insult,” his great-niece Marlene Hocker Brewer told me.

Finding another job didn’t seem to be a problem for Lewis — his family said he was a sought-after brick mason whose white appearance might have opened doors for him that were closed to other Blacks. He earned enough income to own several properties, including the lot he provided to his niece Alma, and her husband, Andrew Hocker, for them to build their home. As a young woman, Alma had lived with the Lewises.

Bradley and Brewer’s youngest sibling, Cliff Hocker, 71, a writer, still lives next door to the family home in Richmond’s North Side, near Richmond Raceway. (Lewis lived in nearby Providence Park.) As the youngest, Cliff didn’t know Lewis as well as his older siblings, but he recalled that he “did seem to have a composure about him and a wit. He didn’t seem to be a bitter person” despite the challenges he faced.

Bradley and Brewer recall as young children being infatuated with Lewis’ straight, blond hair and how, whenever he visited, they would fetch a comb and ask if they could comb his hair. Typically a quiet person, Lewis might offer slight resistance, Brewer said, but would often relent good-naturedly.

“He was very playful with us children … the type of man that would let little 5- and 6-year-old children just rumble through his hair,” Brewer said with a laugh. Tom and Bessie had no children.

The last decades of Lewis’ life were filled with more sadness and health problems. Bessie, described by her great-nieces as a “saintly woman” who would make the children elaborate Easter baskets when they were young, died in 1943. Lewis never remarried and made a point of keeping everything in his house just as Bessie had arranged it.

Lewis was in and out of what is now McGuire Veterans Affairs Medical Center for respiratory issues (he suffered from tuberculosis, his great-nieces said, and also might have been gassed during World War I) and later had his legs amputated. His great-nieces recall visiting him in the hospital, first in the white ward of the segregated hospital.

After a visit by one of his great-nieces who showered him with affection, including hugs, white patients in the room made disparaging comments about her. Lewis explained she was his niece.

“I guess they must have told the nurses, ‘He’s not one of us,’ because they moved him to the Black ward after that,” Bradley recalled, noting patients in the Black ward thought Lewis’ arrival meant their ward was being integrated before learning the real story.

Lewis died in 1968 and is buried at Glendale National Cemetery on Willis Church Road in eastern Henrico.

Zachary Hocker said the man in the picture, the great-great-uncle he is only learning about now, played the hand life and society dealt, found love amid the hardship and stayed true to himself — a man, Hocker said, “born from a tragic occurrence [who] brought so much love and happiness to my family in the end.”

“More than ever, it seems like people are divided by race,” Hocker said. “Annette and I felt that the story we wrote about Uncle Tom would demonstrate how someone’s race and appearance really mean nothing at all. All that matters is the content and goodness within your soul.”

John Thomas “Tom” Lewis, who was born in 1890 and lived mostly in Richmond, was biracial. He appeared to be white but lived his life as a Black man.

In a 1938 family photo, (from left) Andrew and Alma Hocker -- Zachary Hocker's grandparents -- are shown with Bessie and Tom Lewis. The Lewises provided the lot on which the Hockers built their home in Henrico County.

Zachary Hocker of San Jose, Calif., holds a 1953 photo of his great-great-uncle, a biracial man who lived most of his life in Richmond.