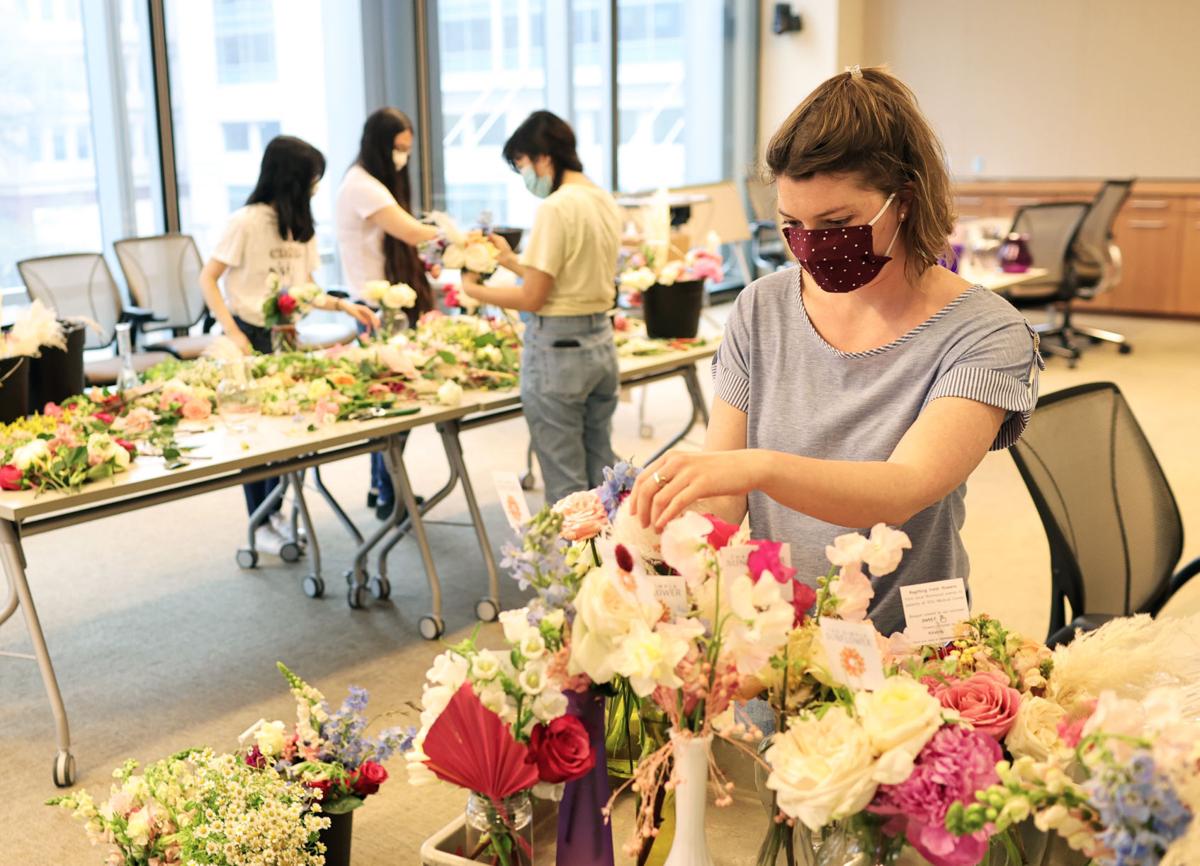 Evan Ward (right), a volunteer and VCU Health employee, and other volunteers use donations of flowers to make bouquets, which generally go to palliative care patients, but also to patients in other units. 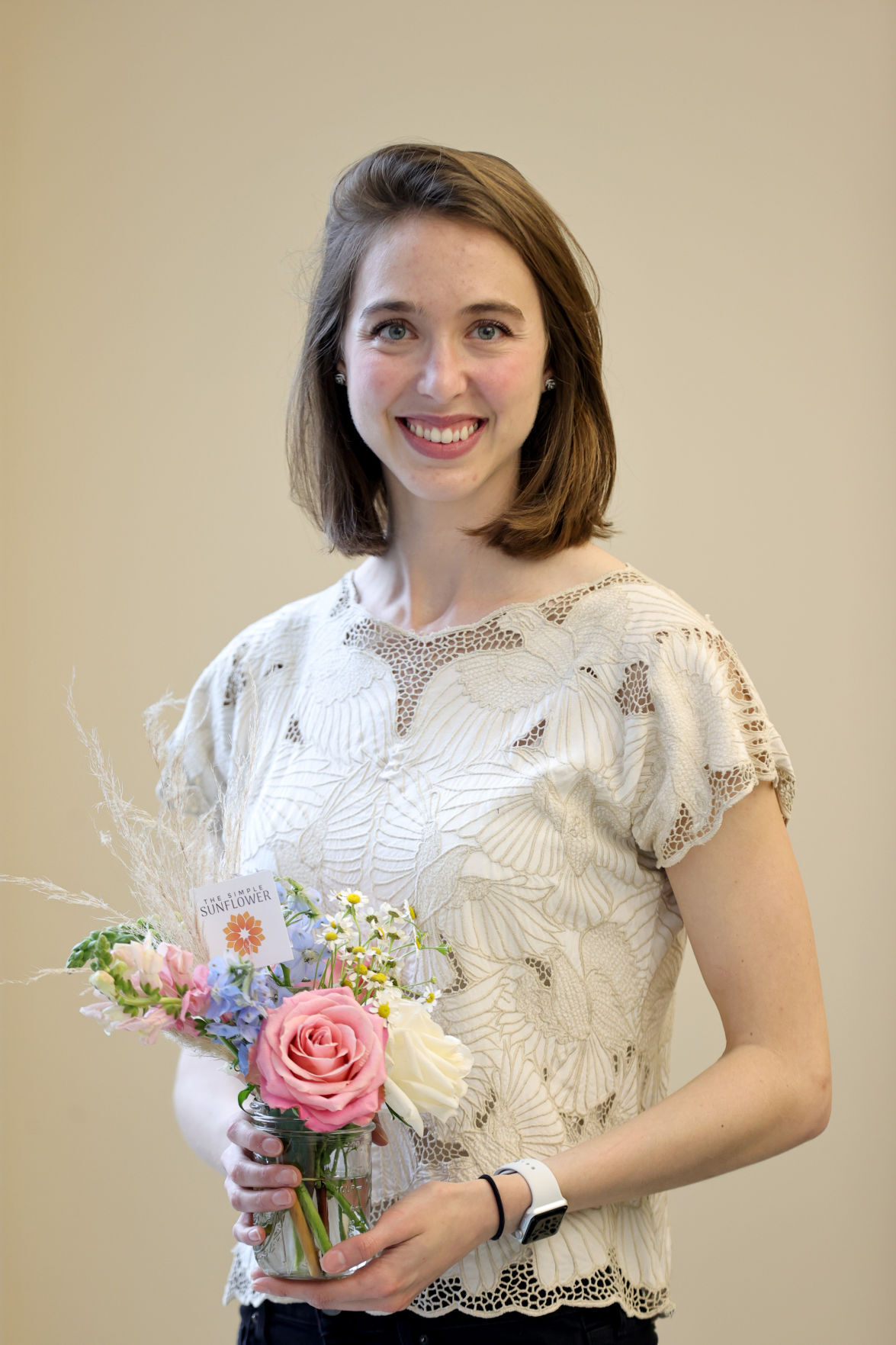 Eleanor Love, a VCU medical student who repurposes wedding bouquet flowers and gives them to patients. She is a founder and a lead volunteer for The Simple Sunflower. 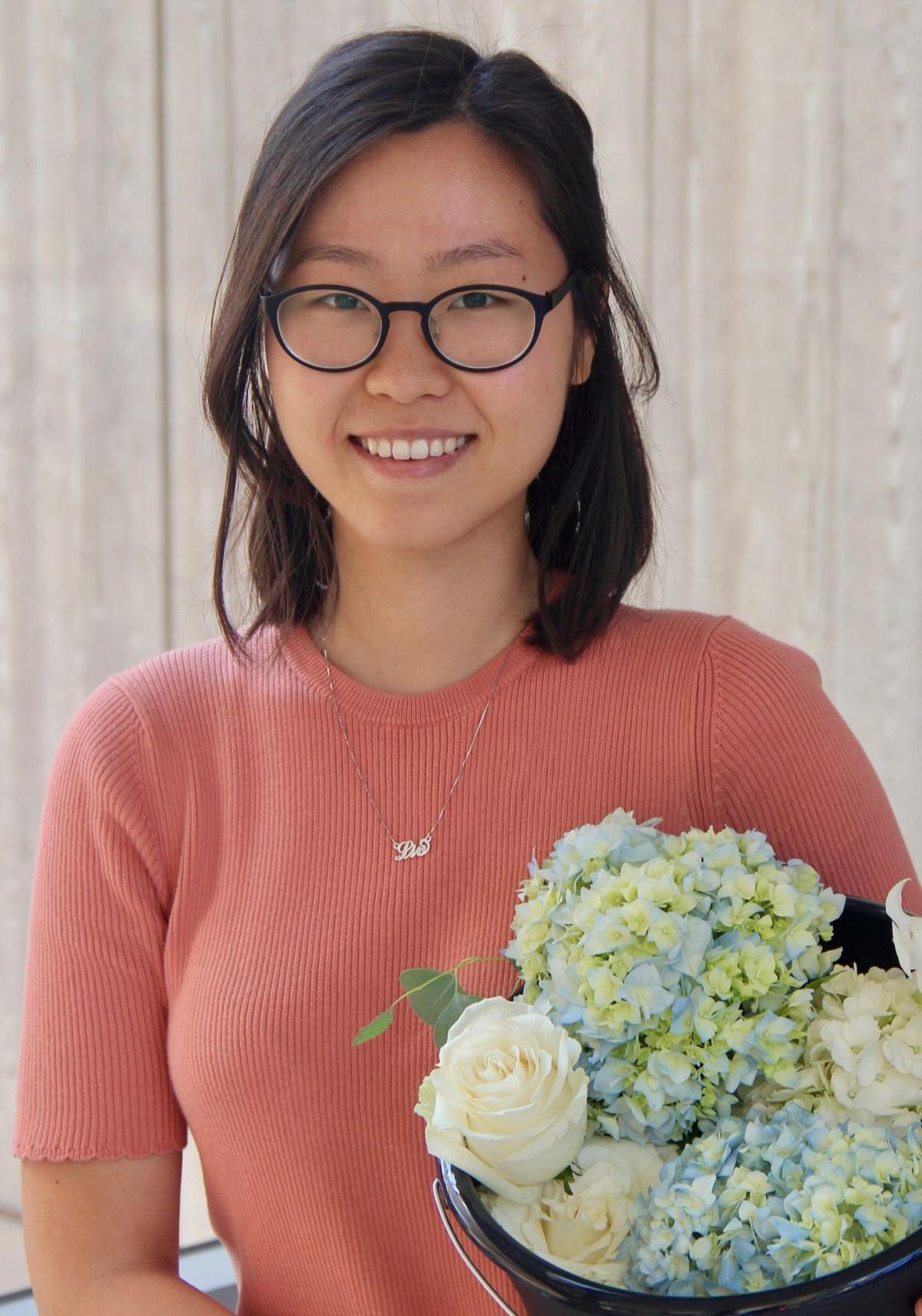 Olivia Lee, a third-year medical student at the VCU School of Medicine, is president of The Simple Sunflower organization.

You can trace Eleanor Love’s love of flowers back to her childhood when she would grow a hardy patch of sunflowers in her family’s front yard in Arlington.

Later, after graduating from the University of Virginia, she spent a year as a volunteer with the National Health Corps, a branch of AmeriCorps, providing health care and education for underserved communities in Philadelphia. During that stint, she worked part time in a flower shop.

“Customers would always walk in and leave happy,” she said.

That aspect of the job stuck with her, and a few years later as a student at the Virginia Commonwealth University School of Medicine, she was inspired to launch an organization that repurposes wedding flowers into bouquets for hospital patients. More than 500 such bouquets have brightened the rooms of patients at VCU Medical Center since the organization, The Simple Sunflower, began its work in 2019.

“Brightening other people’s days” is something that goes a long ways in flower shops and, particularly, in hospitals, Love said.

“To be able to provide that moment of happiness by delivering a bouquet to a patient harkens back to the experience I had working in the flower shop,” she said, noting studies that have shown seeing flowers, plants and trees can help reduce anxiety and even pain for patients. “It allows you to provide something that lifts someone’s spirits.”

The concept of The Simple Sunflower is not original, Love said; a Google search found a number of similar organizations around the country, though none in the Richmond area, repurposing flowers that had considerable life remaining after their intended use. Another source of inspiration was her third year of medical school, when hospital rounds became part of her education and she began interacting with patients and their families who could use a boost from a bouquet.

“A random act of kindness,” she said, “and a way to spread good cheer in the hospital.”

Love connected with florists and wedding venues that broached the subject with customers, asking if they would donate their flowers after the events. She learned the basics of caring for flowers and making arrangements during her time at the Philadelphia flower shop, skills that gave her a running start when she launched The Simple Sunflower.

But she also needed volunteers to make it happen: to retrieve the flowers after weddings, bring them to campus and then create colorful new arrangements from the leftover blooms and greenery.

She began assembling a team of volunteers that is mainly made up of VCU students, undergraduate and medical, and VCU employees, as well as community volunteers not affiliated with the university.

The actual deliveries to patients are handled by VCU Health Volunteer Services. The bouquets generally go to palliative care patients, but also to patients in other units.

“The flowers are a simple gesture that is highly appreciated,” said Amanda Landes, director of VCU Health Volunteer Services. “They brighten the day not only for the patients who receive them, but also for the volunteers and nurses who deliver them to patients.”

The past year has been a challenge as some weddings have been postponed or scaled down because of the pandemic, which also has limited the number of volunteers from The Simple Sunflower who can gather to put together arrangements. The winter is a slow time for weddings anyway, so the group went about three months without any flowers to arrange.

But the pace of weddings is picking up again, sometimes to a pleasantly surprising extent. A few weeks ago, an outdoor wedding yielded so many donated flowers that The Simple Sunflower volunteers were able to make more than 40 bouquets for patients.

Love, who graduates May 14, recently matched into a diagnostic radiology residency at Oregon Health and Science University in Portland, though she will spend a year in general training in Newport News before heading west.

Though its founder is departing, The Simple Sunflower is firmly rooted at VCU with visions of growth. An application for nonprofit status, which would make the organization better able to accept donations, is in the works, Love said. She also would like to see The Simple Sunflower partner with more florists and venues and expand beyond VCU. The organization is poised to move on with a deep roster of volunteers and a leadership team that shares Love’s enthusiasm for the enterprise.

“Once I learned about the mission and the potential impact that we could be making to the patients, I knew that this organization was very special and innovative,” said organization president Olivia Lee, a third-year medical student. “I believe [The Simple Sunflower] is a valuable organization because of the direct effect that it has on the patients.

“They are here at their most vulnerable state, and we hope that this gift of re-created bouquets is another way to remind the patients that we are caring for their recovery and well-being.”

For more information or to make a contribution (donations help cover the cost of vases, flowers and other supplies), visit

Evan Ward (right), a volunteer and VCU Health employee, and other volunteers use donations of flowers to make bouquets, which generally go to palliative care patients, but also to patients in other units.

Eleanor Love, a VCU medical student who repurposes wedding bouquet flowers and gives them to patients. She is a founder and a lead volunteer for The Simple Sunflower.

Olivia Lee, a third-year medical student at the VCU School of Medicine, is president of The Simple Sunflower organization.