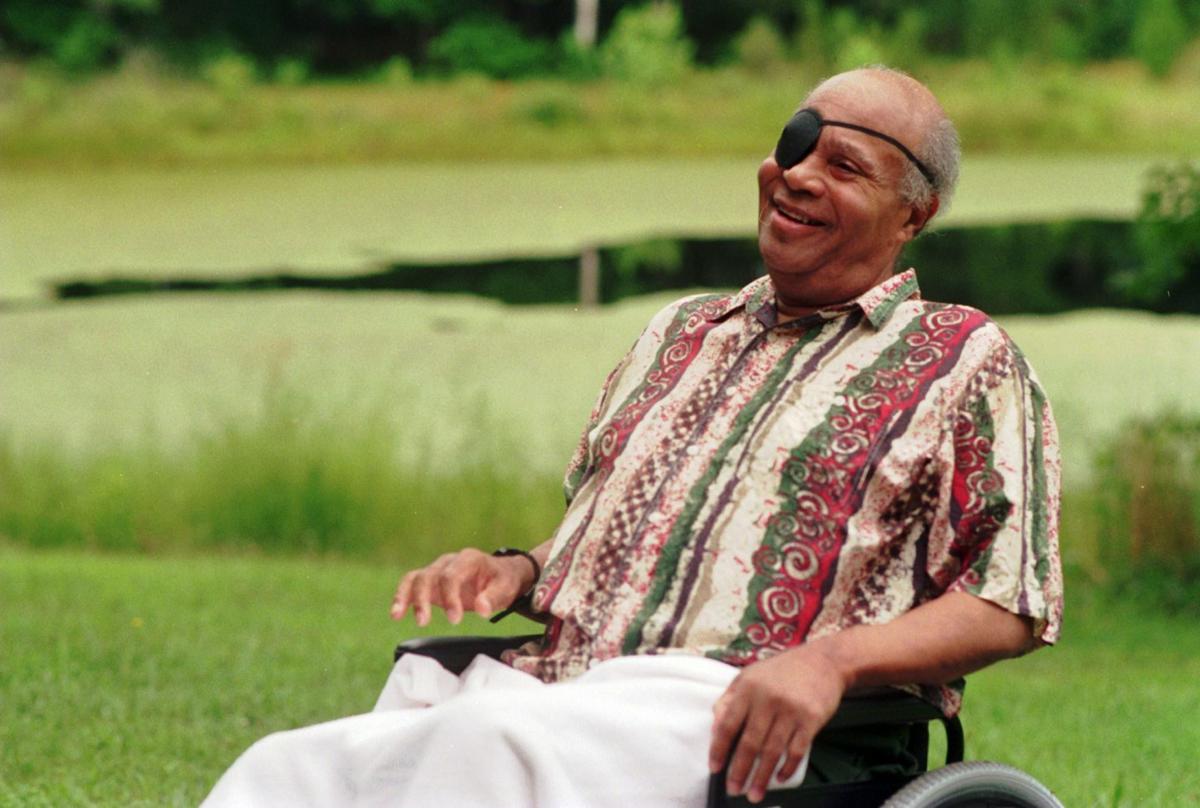 James Farmer, who co-founded the Congress of Racial Equality, would have turned 100 this year. He died in 1999.

In 1964, President Lyndon B. Johnson talked at the White House with civil rights leaders (from left): Roy Wilkins, executive secretary of the NAACP; James Farmer, national director of the Congress of Racial Equality; the Rev. Martin Luther King Jr., head of the Southern Christian Leadership Conference; and Whitney Young, executive director of the National Urban League.

Civil rights leader James Farmer, sits in his home Sunday, Jan. 11, 1998, in Spotsylvania, Va. Farmer, a teacher of civil rights history at Mary Washington College, was selected in 1998 to receive the Presidential Medal of Freedom.

James Farmer, who co-founded the Congress of Racial Equality, would have turned 100 this year. He died in 1999.

In 1964, President Lyndon B. Johnson talked at the White House with civil rights leaders (from left): Roy Wilkins, executive secretary of the NAACP; James Farmer, national director of the Congress of Racial Equality; the Rev. Martin Luther King Jr., head of the Southern Christian Leadership Conference; and Whitney Young, executive director of the National Urban League.

Civil rights leader James Farmer, sits in his home Sunday, Jan. 11, 1998, in Spotsylvania, Va. Farmer, a teacher of civil rights history at Mary Washington College, was selected in 1998 to receive the Presidential Medal of Freedom.

When the state of Mississippi, facing a widespread shift in public opinion, finally decided to shed its Confederate-themed state flag last month, the rush of the moment made the move seem radical and remarkable.

But it was hardly sudden.

Monumental change can fool you like that; it might seem like a seismic shift when it finally happens — the removal of statues, the changing of school names, the dropping of a football team’s nickname — but, in reality, it very well might have been a long time coming at, for those seeking the changes, a maddeningly glacial pace.

In judging the swiftness of progress, perspective matters.

While I was out on furlough last month, I went back and reread my stories from a 1989 trip to Mississippi with James Farmer, co-founder of the Congress of Racial Equality and one of the “Big Four” of the civil rights movement — along with the NAACP’s Roy Wilkins, the National Urban League’s Whitney Young and, of course, the Rev. Martin Luther King Jr., president of the Southern Christian Leadership Conference.

The occasion of the trip was the 25th anniversary of the abduction and murders of three civil rights workers who were part of a registration drive to register Black voters during the so-called Freedom Summer.

When Farmer, an advocate of nonviolent civil disobedience, arrived in Philadelphia, Miss., in 1964 on the day after the young men disappeared, he recalled being greeted by a white mob with chains, guns and baseball bats. Twenty-five years later, he was met with fried chicken, hush puppies and cole slaw, as well as open arms; Mississippi invited him and others back for a picnic. It wanted to apologize.

I can’t recall the details of how that trip came to be, but the upshot was this: Farmer, who was teaching at what was then Mary Washington College, was invited to the event in Mississippi, but needed someone to accompany him because by that point as he had lost his sight, perhaps, he theorized, because of years of tear gas sprayed in his face.

I had interviewed him the year before in Fredericksburg and I, too, was interested in attending the Mississippi event, and somehow the offer reached me: Would I be willing to go to Mississippi and, in a way, serve as Farmer’s eyes?

Beyond the opportunity to hang out with Farmer for a couple of days, the arrangement would allow an up-close view of the proceedings, or as I wrote about the episode, what a singular experience it was to have history riding shotgun.

One aspect of the event was a “Philadelphia to Philadelphia” partnership, meaning a delegation would fly to Philadelphia, Miss., from the Philadelphia in Pennsylvania. We would be traveling with that group, so I picked up Farmer at what he described as his “farmette” in Spotsylvania County and we headed north on Interstate 95.

While we motored along the highway, I asked him to talk about the “old days” of the civil rights movement; he asked me to describe the traffic and the landscape.

Farmer was a big man with a deep, majestic voice, an elegant way with words and a booming laugh that filled a room. He wore a black eyepatch over his right eye that could have made him an intimidating figure but didn’t.

He was born in East Texas, the son of accomplished parents; his father was a preacher and college professor who was said to have been the first Black to earn a doctorate in the state, and his mother was a college graduate and schoolteacher. Farmer considered medicine as a career but discovered he couldn’t stand the sight of blood.

“Since then,” Farmer told me for the 1988 story, “I’ve seen more blood than I could have dreamed.”

Some of it his own.

His path to working for civil rights was inspired early, he said, as he often told the story of his 3-year-old self walking with his mother and asking if they could stop in a store for a Coca-Cola. She told him they could not. Why then, he asked, could another young boy he saw drinking a Coke have one?

Farmer co-founded CORE in 1942 and adopted Gandhi-inspired nonviolent civil disobedience as a tactic more than a decade before King’s Montgomery bus boycott.

In 1961, Farmer led two buses on the famous Freedom Rides into the South to protest segregated interstate transportation with white Freedom Riders intentionally riding in the back of the commercial buses while Blacks took the front seats.

This approach was not well-received. Freedom Riders were beaten, and a bus was set ablaze, its occupants barely escaping.

“What bothered many Mississippians most about Freedom Summer was the white kids coming down there,” Farmer told me. “When they looked at those kids, they might have been looking at their own kids. In a sense, they were looking at themselves.

“These kids were the consciences of white Mississippians. Nobody likes to be tormented by his conscience, and these consciences would give them no rest. Remember, evil societies always kill their consciences.”

Of the three young men who were ambushed and killed in 1964 by a lynch mob that included Klansmen and members of the Neshoba County Sheriff’s Office, two were white.

So, with that backdrop, it’s easy to understand Farmer’s amazement when I took him by the sleeve on that steam bath of a day in June 1989 in eastern Mississippi and described what I saw as our caravan that included families of the victims arrived in Neshoba County: welcome signs, smiling faces, a Black state trooper.

“Times,” he said, “have certainly changed.”

Mississippi’s secretary of state, Dick Molpus, who was born and raised in Philadelphia and was a teen at the time of the slayings, stood before the gathering and apologized for what had happened 25 years earlier — the state also had thwarted justice at every turn, and the mastermind of the crime was not convicted on state charges of manslaughter until 2005 — saying: “We are profoundly sorry. Every decent person in Mississippi feels exactly that way.”

From the vantage point of 31 years later, the whole thing would seem to fall into the category of “What Took Them So Long,” but at that moment, the combination of those small steps of progress seemed like a giant leap forward to Farmer.

Plus, nobody died, like the last time he was in that part of Mississippi.

Organizers made especially sure that the medically fragile Farmer, introduced during the event as a “living legend,” was not among them. When Farmer began to wilt in the heat, he was hustled into the shade, where nurses checked his blood pressure and handed him cold drinks before we were driven to spend part of the afternoon in the air-conditioned refuge of the Philadelphia Chamber of Commerce.

“I really was fine,” Farmer said later with a laugh, “but I guess they didn’t want to kill a ‘living legend.’”

At the Chamber of Commerce, there was a brief moment of concern when we discovered we had been locked in the building — inadvertently, we hoped — by a cleaning person who had been working when we arrived. A member of our group phoned local law enforcement to give us a hand. Farmer noted those were not the people he would have called for help 25 years earlier.

As it turned out, the police responded quickly, arriving with heartfelt apologies for Farmer, once considered an “outside agitator,” but now an honored guest.

Farmer died a decade later, but in the last 18 months of his life, he was given the Presidential Medal of Freedom by President Bill Clinton, and he was honored by both houses of the Virginia General Assembly with resolutions praising him as the architect of the Freedom Rides, which helped lead to the federal government finally enforcing a ban on segregation in buses and terminals and a lot more.

National outrage over the slayings of the three young men in Mississippi — James Chaney, Andrew Goodman and Michael Schwerner — who were beaten and shot and their bodies found 44 days later buried in an earthen dam, helped fuel passage of the Civil Rights Act of 1964 and, a year later, the Voting Rights Act of 1965.

A case could be made that the killing of George Floyd at the hands of Minneapolis police became a similar sort of tipping point that has led to a cascade of societal changes that seem at once astonishingly swift and long overdue.

There is much more to do — including in Richmond, which seems uniquely positioned because of its history to blaze a new, positive path forward. Such change will come not nearly fast enough for some, particularly those who have been laying the groundwork for these changes for years.

How long will it take? History shows us what ought to be done often takes longer than it should.wlohmann@timesdispatch.com

Some of my fondest memories are from my several pilgrimages into Mississippi to hang out with and learn a few licks from some of the older blues musicians... ~~~ Bob