Lohmann: This Richmonder was a pilot for the Royal Air Force during WWII, and his family is sharing his story
3 comments
Share this
1 of 3 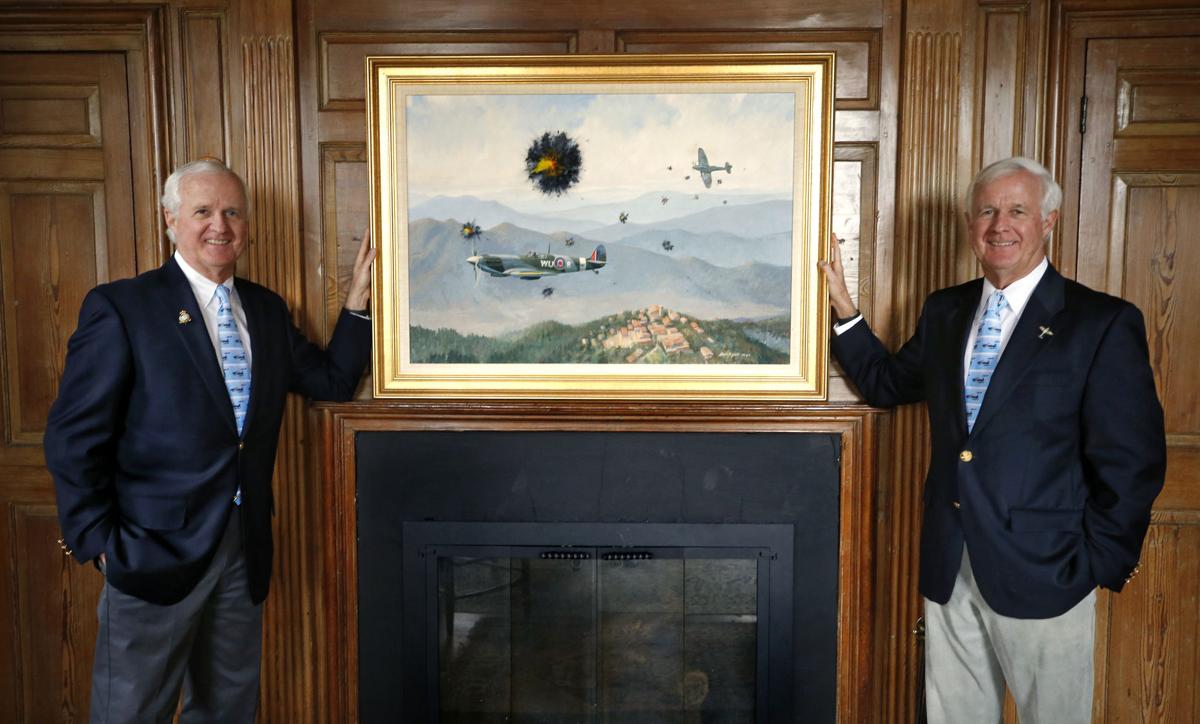 Twins Jim (left) and Preston Smith, both of whom are pilots, hold the painting of a Spitfire like the one Parke F. Smith flew during World War II. Their father, who died in 2013 at age 93, told his sons that he painted the flak on his friend’s painting to make it look more realistic. 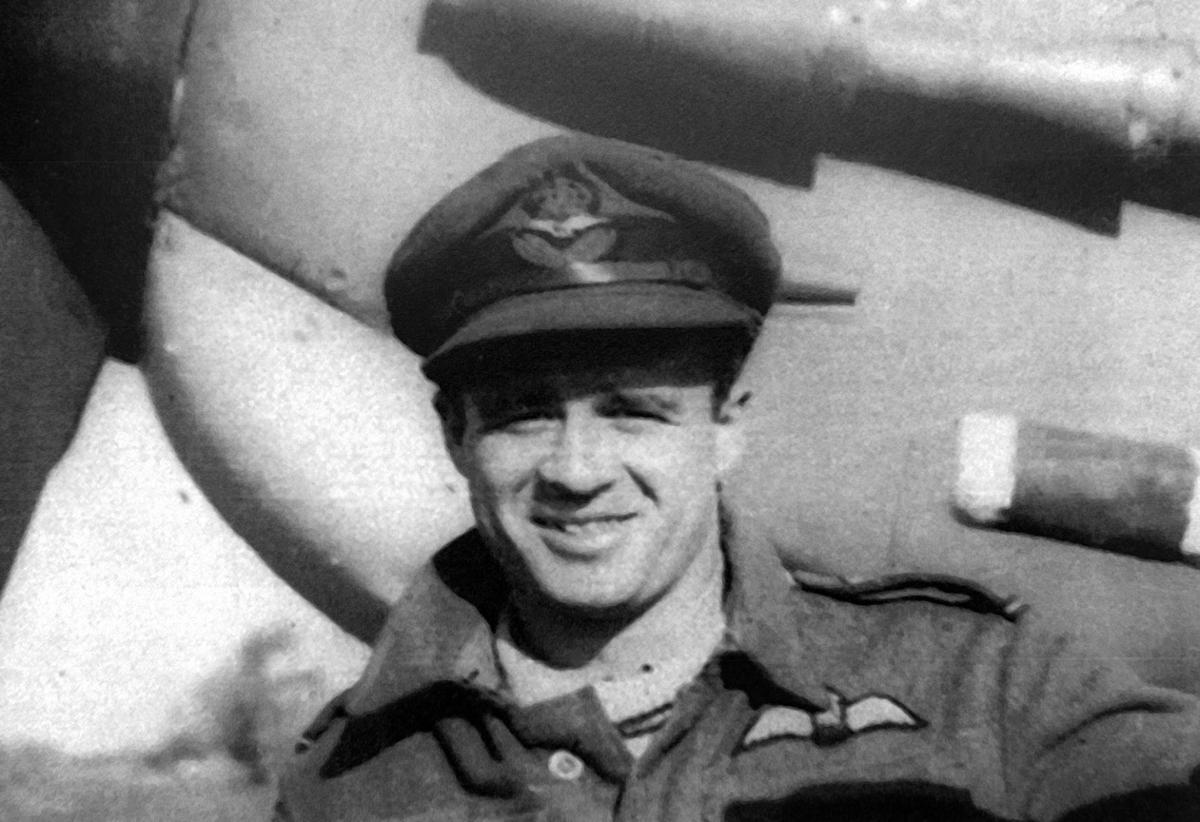 Parke F. Smith was the last American pilot accepted into an RAF program in which British pilots were trained in the U.S. while war raged on the other side of the Atlantic. 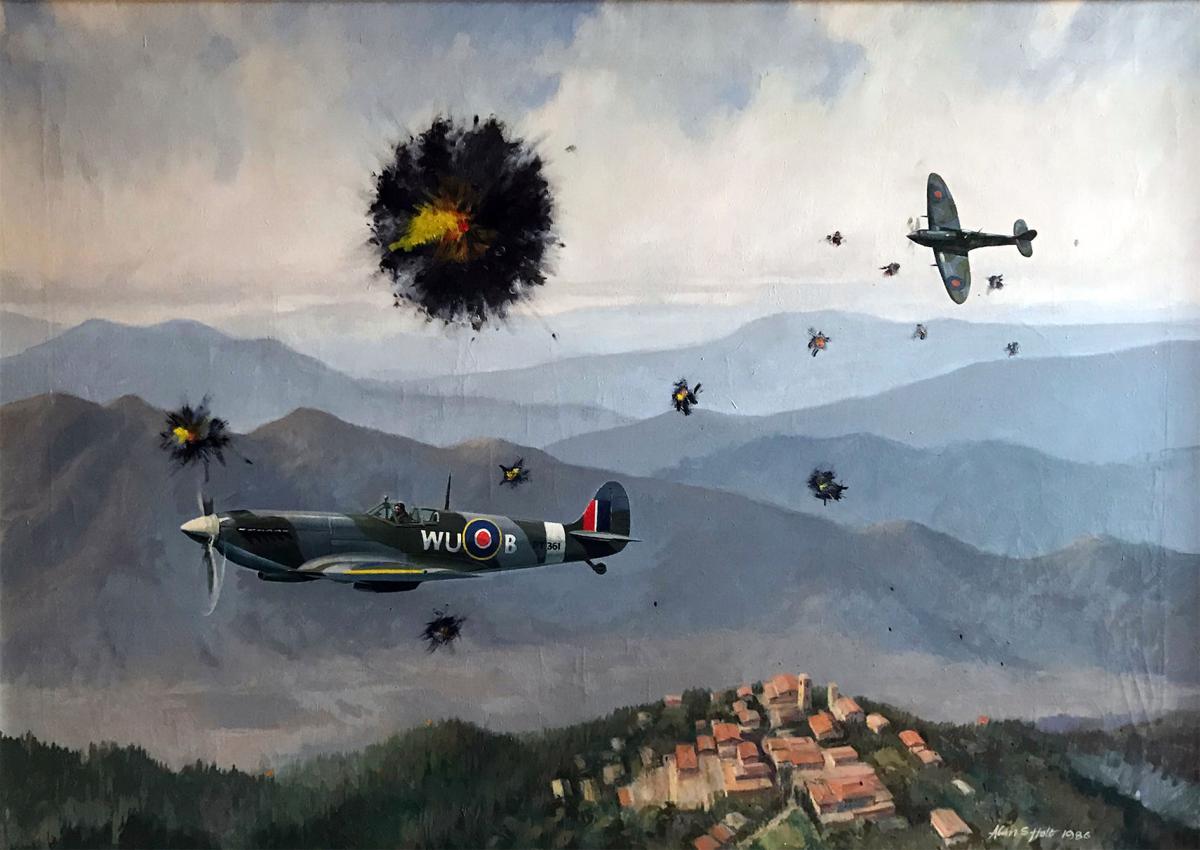 Alan S. Holt, a fellow Spitfire pilot in the RAF who later became an accomplished artist, presented his painting of a Spitfire to Parke F. Smith, who later altered it by adding the bomb burst for “authenticity.”

Rebuffed by the U.S. Navy in his quest to become a pilot on the eve of America’s entry into World War II, Richmonder Parke F. Smith made a fairly bold move for a 21-year-old.

He joined another team. The British Royal Air Force.

Smith was — from what he would later learn — the last American pilot accepted into an RAF program in which British pilots were trained in the United States while war raged on the other side of the Atlantic. In 1942, he sailed to war-torn London, where he swore allegiance to the king of England, losing his U.S. citizenship in the process (though he regained it by way of an act of Congress that reinstated citizenship for all Americans who had served in the British forces).

In four years in the RAF, he flew 129 operational missions, many in his favored Spitfires, a sleek, British-built fighter that was perhaps the most famous of WWII. He loved that plane. He loved his service in the RAF.

Smith died in 2013 at age 93, but his story is now finding a new audience. In his honor, his children have revived a memoir that he wrote in the 1990s, added stories that Smith had left out of the earlier version, as well as photos, and published it anew as “Spitfire: An American WWII Fighter Pilot in the RAF.” (Little Star Communications) All profits go to the Supermarine Spitfire Historical Society in London.

It is at once a remarkable story and an ordinary one: a young man chasing his dream, wanting to do his patriotic duty — preferably in the cockpit of a plane. Swashbuckling and fearless, yet also humble and understated in his telling.

“All he wanted to do was fly,” said Parke’s son Preston, noting the RAF opportunity “just fell in his lap. Trying to figure out how he could continue to fly and help with the war effort was a real struggle for him. I think through connections and his wherewithal ... he found his way to the RAF.”

After the U.S. Navy turned him down for medical reasons, Smith called U.S. Rep. David E. Satterfield Jr., whose son (and also later a congressman) David E. Satterfield III was a classmate of Smith’s at St. Christopher’s School. Smith asked Satterfield what he knew of the RAF’s stateside training program, and Satterfield provided a contact in New York. Smith hopped a train with his pilot’s logbook to plead his case.

Smith had been enthralled by flying from an early age. He was a young boy when he attended a parade in Baltimore, where he lived in his early years, to welcome home Charles Lindbergh after his historic solo flight across the Atlantic in 1927. As a birthday present, a friend’s father gave his son and his buddies, including Smith, a flight aboard a monoplane. The experience “sealed my fate,” Smith wrote. “I had to fly!”

As a student at the University of Virginia, Smith learned to fly through the school’s Civilian Pilot Training Program. That he had reached that point of his life was something of a miracle considering the mishaps he had survived as a child: He was run over by one truck during a game of “kick the can” and crashed into another on his bike, and while away at camp he was even plowed over by a horse.

“How was I to know one should never walk in front of a horse at night?” he wrote.

Flying took precedence over his studies, and Smith left UVA to head for the sky. He flew missions for the RAF in North Africa, Italy and the North Sea. While other Americans with the RAF moved to the U.S. armed forces when opportunities arose, Smith elected to remain with the RAF because it had given him a chance.

Smith experienced his fair share of harrowing moments and close calls, as well as agonizing loss. His older brother Jimmie, serving with the U.S. Navy Air Corps, was shot down in the South Pacific, an episode Smith handled in his memoir with the same sort of matter-of-fact approach he exhibited in the rest of his story and one that particularly resonated with Preston Smith, whose son, Parke F. Smith II, a Marine, served three tours in Iraq. One of his father’s first thoughts after learning of his brother was to let his family know he was OK.

“Thinking how communications were [back then], when you didn’t get letters for two or three months,” said Preston Smith. “With my son, you had satellite telephones, instant messaging. Could you possibly imagine how his [father’s] mother and father felt, not knowing where he was, what he was doing, whether he was dead or alive? I couldn’t fathom it.”

The parallels Preston found between his father’s experience and his son’s in the early 2000s gave him a new appreciation of what his father had written a decade earlier, at wife Alice’s urging, in the war stories he printed and distributed to family and friends. His father was “so modest and unassuming,” Preston said, that the family wasn’t fully aware of his war-time experiences or the lasting impressions he had made on friends in England until they began going through his papers after his death.

In 2018, Preston and his twin brother, Jim — both of whom are also pilots — visited London and had the opportunity to fly restored Spitfires with instructors.

“It was so unbelievable to feel what Dad had to go through, to be in a foreign country, 21 years old, flying this airplane with the Germans ready to kill him and not knowing where he was,” Preston said. “It was phenomenal. That really got us cooking on this book.”

The Smiths were connected with Joni Albrecht of Little Star Communications, a Richmond firm that produces books, among other things, and she immediately fell in love with the story and the way it was told. She believes Smith’s story takes us “back to a time when Americans willingly rationed so their neighbor could have what they needed, when the heroes didn’t talk about being heroes, they talked about their family or they talked about their airplane. I think everyone’s longing to be reconnected with that spirit.”

Albrecht and her team provided editing and organization, but Smith’s writing needed little more than tweaking.

“We got in there, and we really didn’t want to change much of it,” Albrecht said. “This is really who he was.”

A stunning backdrop to all of this is Fairfield, Parke and Alice Burwell Preston Smith’s reconstructed 18th-century home off River Road in Henrico County that once was owned by a relative of Patrick Henry. Alice Smith, who died in 2017, was a former Garden Club of Virginia president and Historic Garden Week chairwoman.

Inside the home still hangs a painting of a Spitfire that had been given to Parke decades ago by a former squadron mate who had become an accomplished artist.

“One day we come in the house, and there he is with a palette of paint, and he’s gone and drawn in a bomb burst on this original painting,” Preston recalled. “We’re like, ‘Dad! What did you do?!’ He said it wasn’t authentic. It needed to have the bomb burst.”

That painting — including the bomb burst — serves as the cover of the book.

Preston Smith said his father’s biggest regret is that he wasn’t able to become a commercial pilot. When he returned from the war, he felt obliged to help his father in his building supply business and later to take it over. He kept his hand in flying, though, purchasing a Stearman biplane, and at one point flying as a stunt pilot in the barnstormers airshows in the early days of Kings Dominion. It was a family affair in the shows, which included a hot air balloon.

Or through Amazon and other national retailers

5 of 6 victims killed in Chesterfield house fire identified; three others released from hospital

A woman and four children killed in a house fire on Friday in Chesterfield County have been identified by fire officials.

Residents who live near the Robert E. Lee statue say 95% of them want the statue removed.

State police are investigating an Interstate 64 crash near Short Pump that fatally injured a Richmond woman.

Twins Jim (left) and Preston Smith, both of whom are pilots, hold the painting of a Spitfire like the one Parke F. Smith flew during World War II. Their father, who died in 2013 at age 93, told his sons that he painted the flak on his friend’s painting to make it look more realistic.

Parke F. Smith was the last American pilot accepted into an RAF program in which British pilots were trained in the U.S. while war raged on the other side of the Atlantic.

Alan S. Holt, a fellow Spitfire pilot in the RAF who later became an accomplished artist, presented his painting of a Spitfire to Parke F. Smith, who later altered it by adding the bomb burst for “authenticity.”