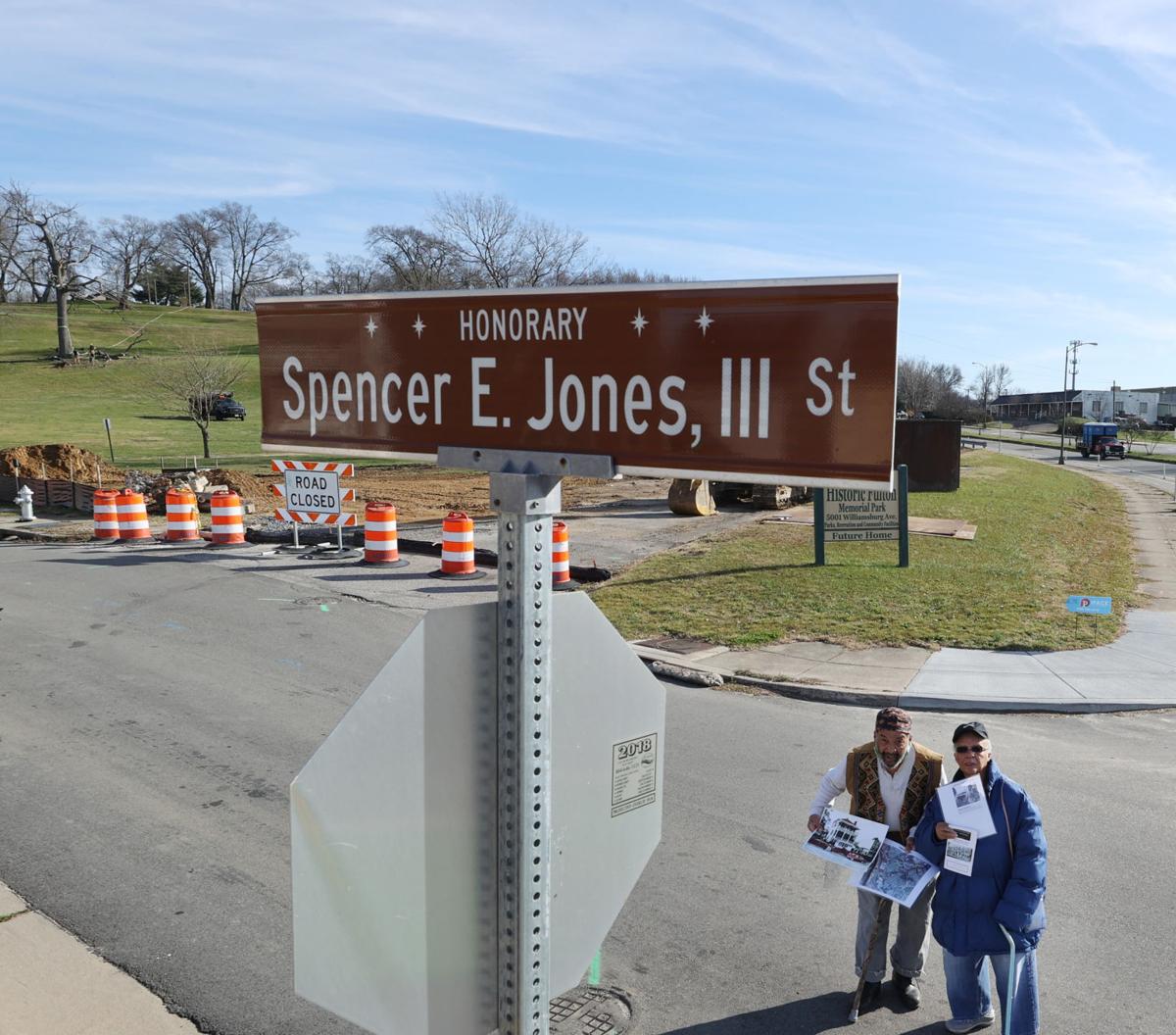 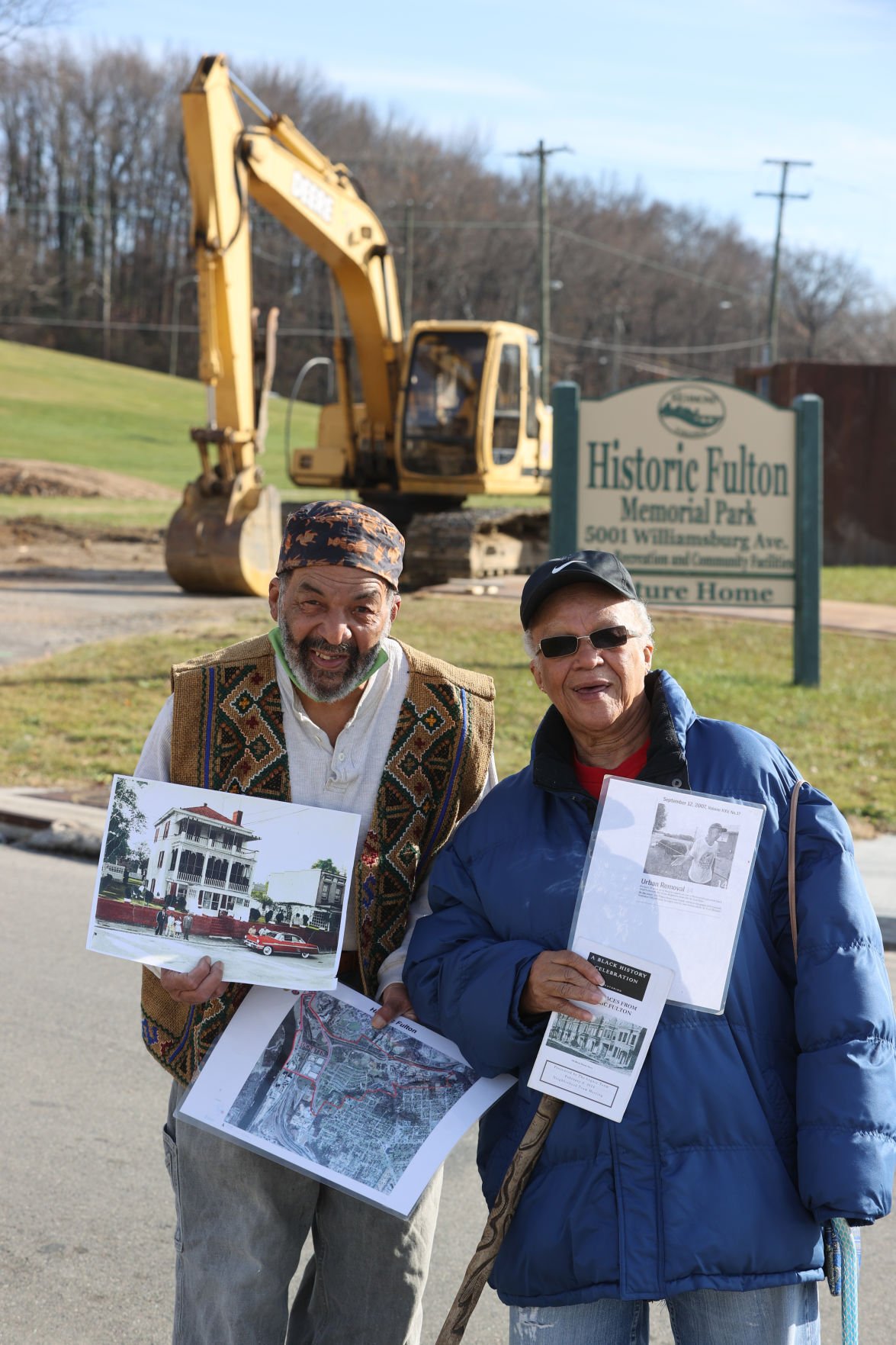 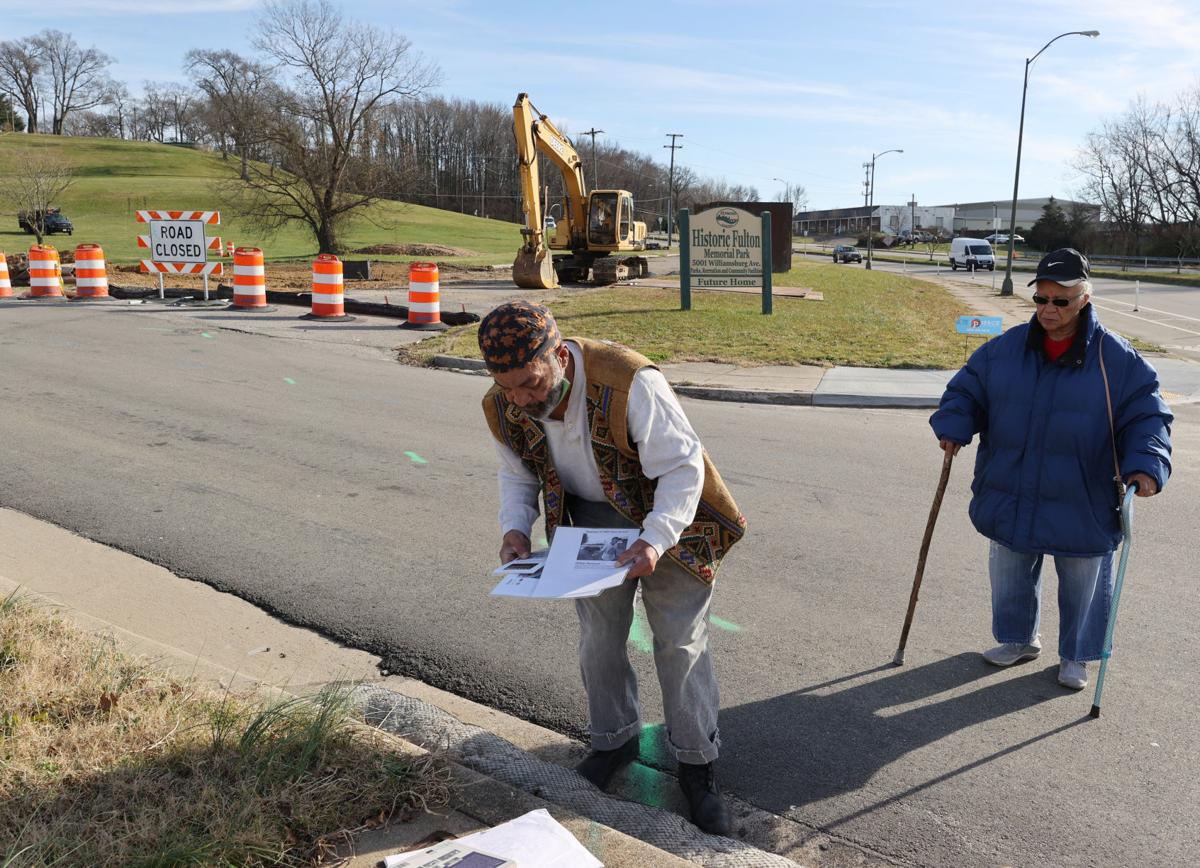 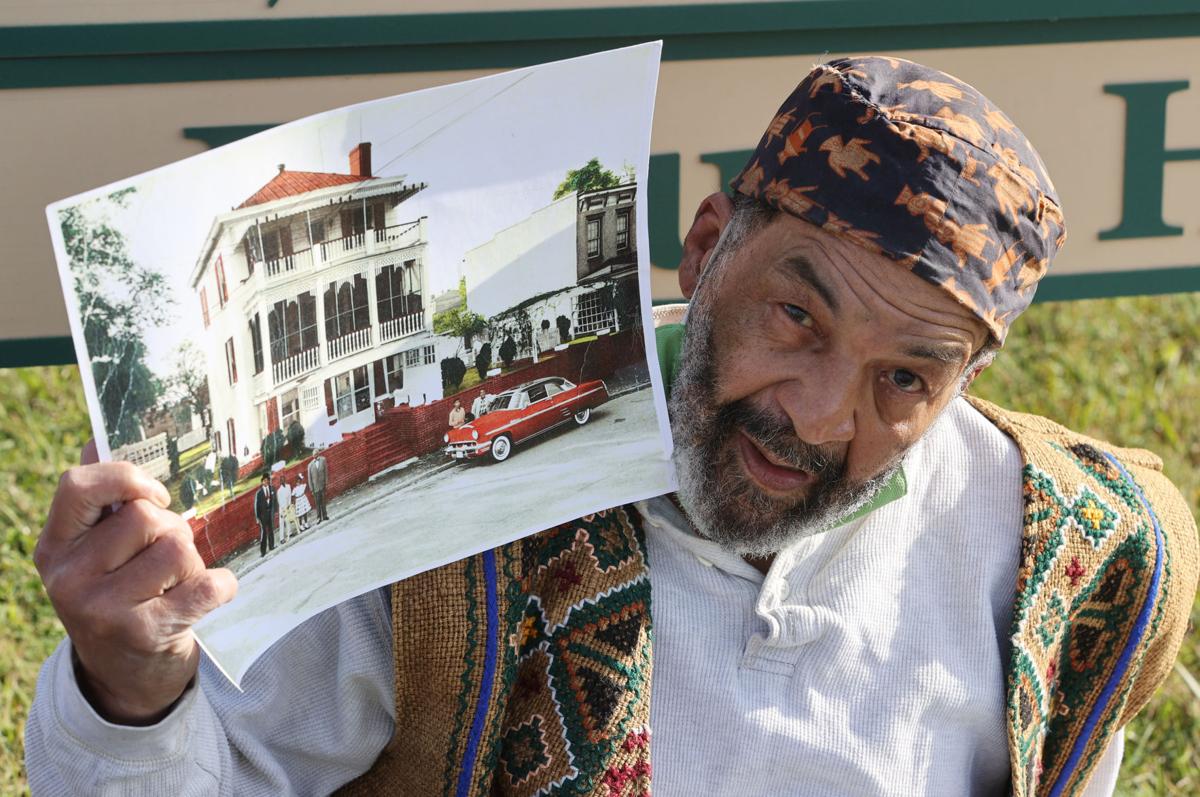 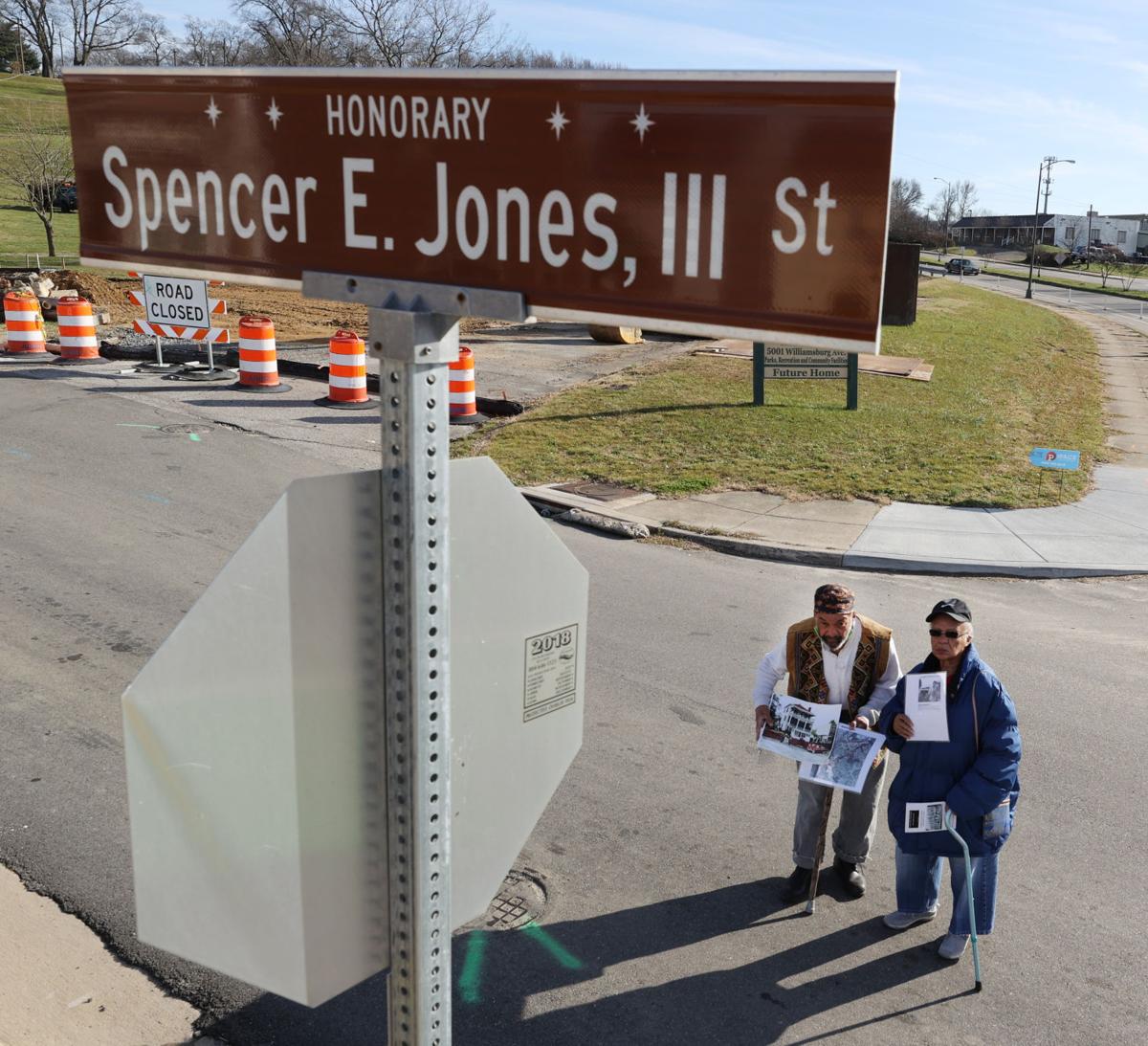 Spencer E. Jones III stands with his mother, Marian McNair, on the street named after him. Jones and his mother were both born in the same bedroom in a home at 702 Denny St. He has devoted years to preserving the Fulton area’s history.

During the bleak times when he was struggling to stave off the demolition of his Fulton home, Spencer E. Jones III would return to 702 Denny St. and the bedroom where he and his mother were born.

“Very rarely can you go to the place where you first came in the world. And I used to go there to keep the inspiration to keep fighting,” he recently recalled.

Jones never stopped fighting for Fulton, where a plaque in a stone wall notes that Captains Christopher Newport and John Smith were greeted by Powhatan Indians on May 1607.

But where residents saw a bustling grid of homes, businesses and churches, city officials saw a slum. During the 1970s, the mostly Black neighborhood was erased from the Richmond landscape in the guise of urban renewal. Jones’ home was among the last of the more than 850 structures to fall. Only one dwelling from that era remains.

But Jones would not allow the memory of Fulton to die. As he and other displaced residents reunited regularly over the decades, reminiscing as they huddled around a barrel on a vacant lot, he envisioned a place where Fulton’s history would be commemorated.

In July, ground was broken on the Historic Fulton Memorial Park at 5001 Williamsburg Ave., a triangular tract of land at the base of Powhatan Hill. The displaced will have a space of commemoration; newcomers filling recently built homes, a place to learn the story of who and what came before them.

The park eventually could include a statue of Fulton’s proudest native son, Vice Adm. Samuel L. Gravely Jr., the first African American to command a U.S. Navy ship and fleet. Jones is pushing for pink dogwood trees to honor the women who helped him get the park established.

“I have never known anyone so committed to the preservation of a neighborhood’s history,” said Bill Martin, director of The Valentine museum.

Jones linked the museum with former and current Fulton residents in the Valentine’s effort to add objects, photos and oral histories to its collection, Martin said. He also appeared at public meetings, advocating for the neighborhood with political and community groups. He showed up regularly with folders of information and government reports on Fulton, now in the museum archives.

“He carries the heavy weight of the demolition of his home and the painful loss of his community with him at all times. Making sure that everyone understood the continuing legacy of this injustice keeps Spencer going.”

Martin added: “I just wish we had this kind of advocate in every neighborhood.”

The ever-vigilant Jones, 70, is not one to bask in such praise as gentrifying Fulton is poised to become the next hot Richmond neighborhood. He is constantly guarded against what he calls “community identity theft,” and as he describes the rebranding of the nearby communities of Fulton Hill and Montrose Heights.

“What makes him unique is that he still demands justice for a community so utterly obliterated from the face of this city,” said historian Selden Richardson, whose book “Built by Blacks: African American Architecture and Neighborhoods in Richmond, VA” includes a chapter on Fulton and a photo of Jones, then named Spencer Armstead, sitting amid the desolate ruins of his razed community.

“The contrast between his fervor and loyalty in keeping Fulton alive and the complete and utter erasure of his hometown is as dramatic as it is heartbreaking,” Richardson said.

Jones, born in 1950, spent part of his childhood in France with his mother’s second husband, who was in the Air Force. He attended Fulton’s Webster Davis School and spent one year at Armstrong High before receiving a scholarship to Cushing Academy in Massachusetts through a program for disadvantaged students called A Better Chance.

Upon graduating, he attended Carleton College in Minnesota, studying sociology and anthropology, before dropping out in his senior year and heading to Oakland, Calif., spending six months with the Black Panthers. That period steeled him to fight for Fulton upon his return in 1974.

To see the neighborhood destroyed, “To be honest with you, it about broke me,” he said. For a time, he lived in the home of a relative on Fulton Hill.

When the Richmond Redevelopment and Housing Authority decided to build dozens of homes next to the last home standing in the old community, Earl Robinson joined Jones in his preservation effort.

Robinson’s death led Councilwoman Cynthia Newbille to vow to see the memorial park project through. Today, both Jones and Robinson have commemorative streets named for them.

Jones says the points of inspiration for his fight were the American Indians who used to hunt and gather in the valley that would become Fulton.

“It started out fighting for the house, but I began to realize that the land had no voice. And I felt like the land spoke through me,” he said. “The fight seemed like it was spiritually sent to me through the American Indian.”

Jones now lives in Church Hill. But Fulton remains in his DNA, he said.

“It’s like the land hatched me. I feel as though that what I’ve done was done as a guardian to say, ‘Hold up: The story needs to be told.’ ”

People and pets should avoid swimming, wading and tubing in the James River beginning today, says the Virginia Department of Health.

Spencer E. Jones III stands with his mother, Marian McNair, on the street named after him. Jones and his mother were both born in the same bedroom in a home at 702 Denny St. He has devoted years to preserving the Fulton area’s history.