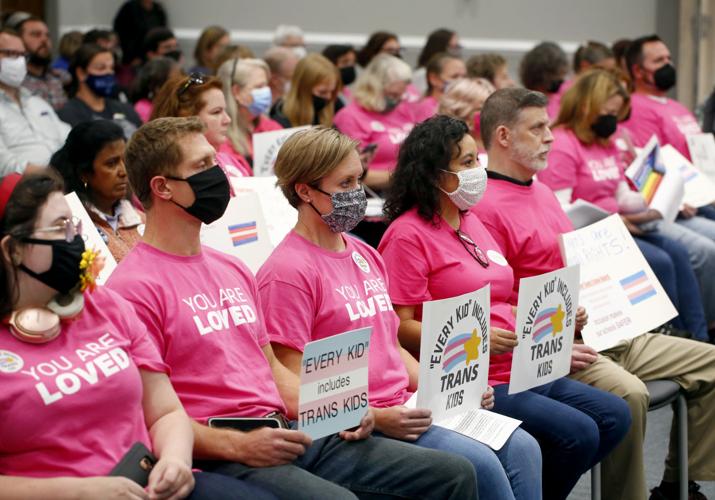 People held signs supporting transgender children during a forum led by the ACLU of Virginia in Hanover County in November. 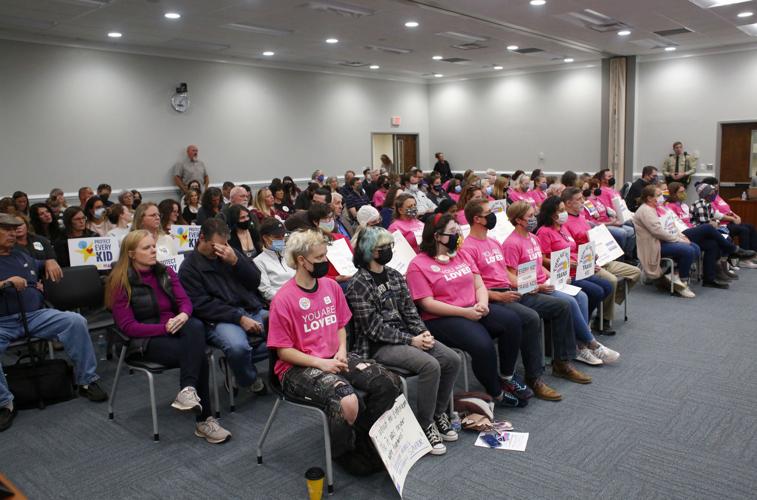 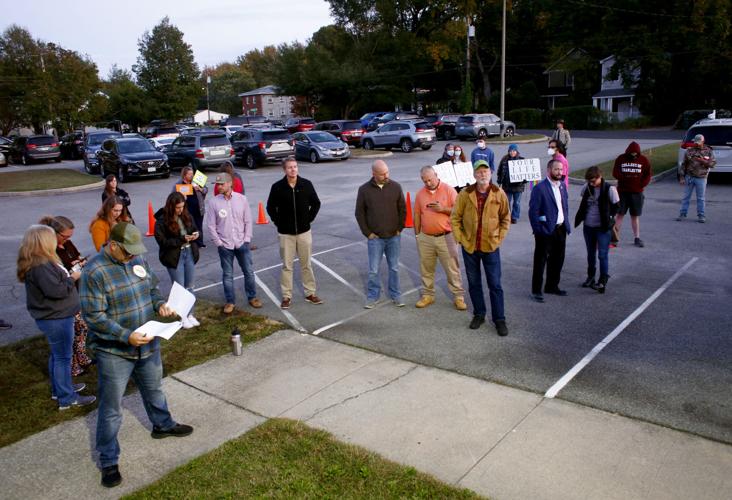 With the room at capacity, people listened through an outside speaker to a public comment meeting on proposed transgender student policies held Nov. 4 at the Hanover County School Board office in Ashland. 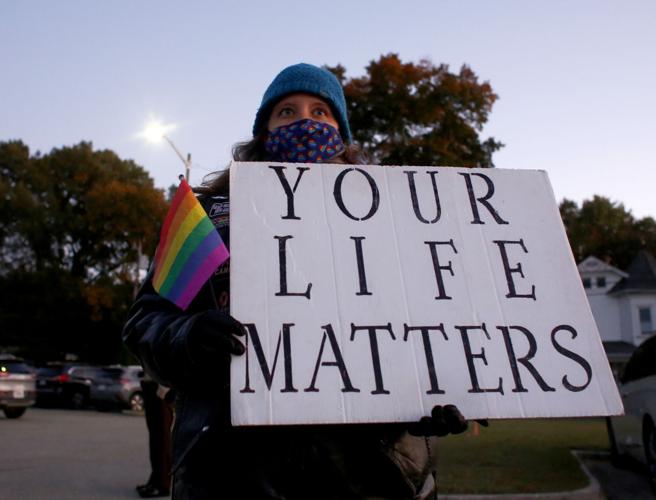 Katy Clements of Henrico County held a sign outside the Hanover County School Board office on Thursday. 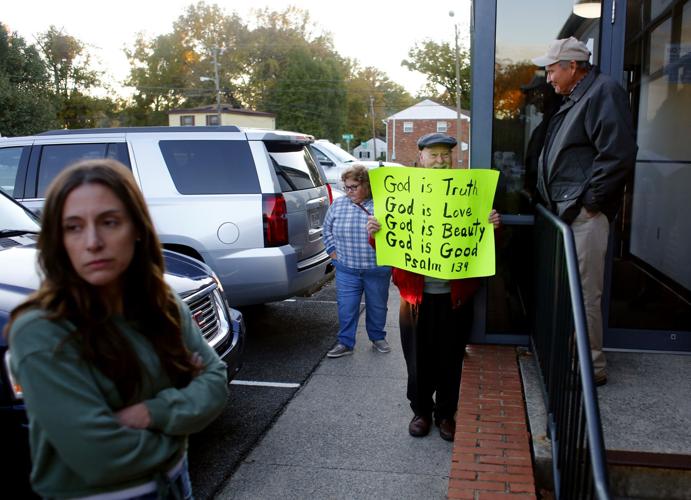 Staunch opinions on both sides of transgender issues came out Thursday night in Hanover County’s School Board meeting room, where more than 50 people signed up to speak — and more showed up in support — at a public comment meeting held just to hear from the community on the subject.

Those bolstered by a conservative wave that swept Virginia in Tuesday’s elections urged the board to vote down proposed transgender policies — or at least delay a vote until Governor-elect Glenn Youngkin takes office in January. Others, who reminded the board that the district is already behind in compliance with state laws, urged them to treat transgender students with “grace and kindness” and adopt the proposed policies.

Legislation passed last year by the Virginia General Assembly required the Virginia Department of Education to create model guidelines for the treatment of transgender and nonbinary students. It also required that all of Virginia’s 132 school systems adopt policies either “consistent with” or “more comprehensive” than VDOE’s policies, which state that students should be allowed to use gender pronouns and names that reflect their preferred gender identity and to dress and use school bathrooms and locker rooms in ways that conform to their preferred gender identity.

Another component of VDOE’s guidelines suggests that schools could withhold information from parents and guardians about students’ preferred identities if the students request privacy.

Rather than address the issue and have policies in place before school started on Sept. 7, Hanover’s school board members took up the issue at a work session on Sept. 30, then reviewed proposed policies at its Oct. 12 board meeting.

The board is scheduled to vote on proposed policies Tuesday evening at its regular board meeting.

Within the packed board room Thursday night, more than a dozen supporters of transgender and LGBTQ rights wore pink shirts that read “You are loved.” Others carried signs that read “Protect Every Kid/Mind Body Heart.”

Earlier Thursday, a group of about 30 people — parents and some students — stood outside Atlee High School before school started, holding signs in support of transgender policies in the hopes of encouraging the board to vote and be in compliance with state laws. Some of those people were wearing the same shirts.

At the meeting Thursday night, parent Beth Cox said the transgender issue is not new, and that “experts and advocates and legislators already met and made these guidelines law — I’m not sure why we’re here.”

She explained that her daughter was among the first transgender students in Hanover schools years ago. She said her daughter would be considered, by some today, as “a man in a skirt,” a “would-be criminal” whose intentions were to assault students in the girls’ bathroom.

In reality, Cox said, her daughter “was a threat to no one,” and that “she was afraid for her safety in both the girls’ bathroom and the boys’ bathroom,” ultimately using the nurse’s bathroom in her school.

“I had to learn to grow a thick skin,” Thies said, and to those who are opposed to such policies because their children would be scared to use bathrooms with transgender students, “it may seem scary [but] it can be scary for us, too.”

Hunter Young, a father of two, said he and his wife took their two children out of Hanover schools earlier this year after learning that one of his daughter’s third-grade classmates was a boy who identified as a girl.

“She didn’t understand … why he wore dresses,” Young said, and “it was hard for her young mind to process.”

Young said “I have zero hatred in my heart for anybody,” and that he was told by the principal that there’s nothing that could be done. He said his daughter shouldn’t be forced to call a boy by a girl’s name — “I don’t believe that’s right.”

Jessica Parker Zdinak urged the board to “take a pause and truly consider the research,” which she said often involves teens and adults, not young children. But she pointed out that if the policies are adopted, “we’re talking about implementing policies for 5-year-olds, 7-year-olds.”

Another parent, Danielle Floyd, said she’s concerned about her daughter’s safety, and suggested the schools designate or build gender-neutral bathrooms to satisfy those who want special accommodations.

“You shouldn’t rush into any decisions,” she said, “especially when there hasn’t been a solution that would accommodate everyone.”

Lauren Mast told the board that if the proposals pass, “you’re undermining my rights as a parent,” as well as violating her religious freedoms and leaving her daughter open to assault.

Tuesday night’s board meeting begins at 7 p.m. at the School Board office at 200 Berkley St. in Ashland.

'These laws exist for a reason': ACLU files suit against Hanover School Board on behalf of parents of transgender students

The reason Finland is always voted the happiest country

The reason Finland is always voted the happiest country

People held signs supporting transgender children during a forum led by the ACLU of Virginia in Hanover County in November.

With the room at capacity, people listened through an outside speaker to a public comment meeting on proposed transgender student policies held Nov. 4 at the Hanover County School Board office in Ashland.

Katy Clements of Henrico County held a sign outside the Hanover County School Board office on Thursday.