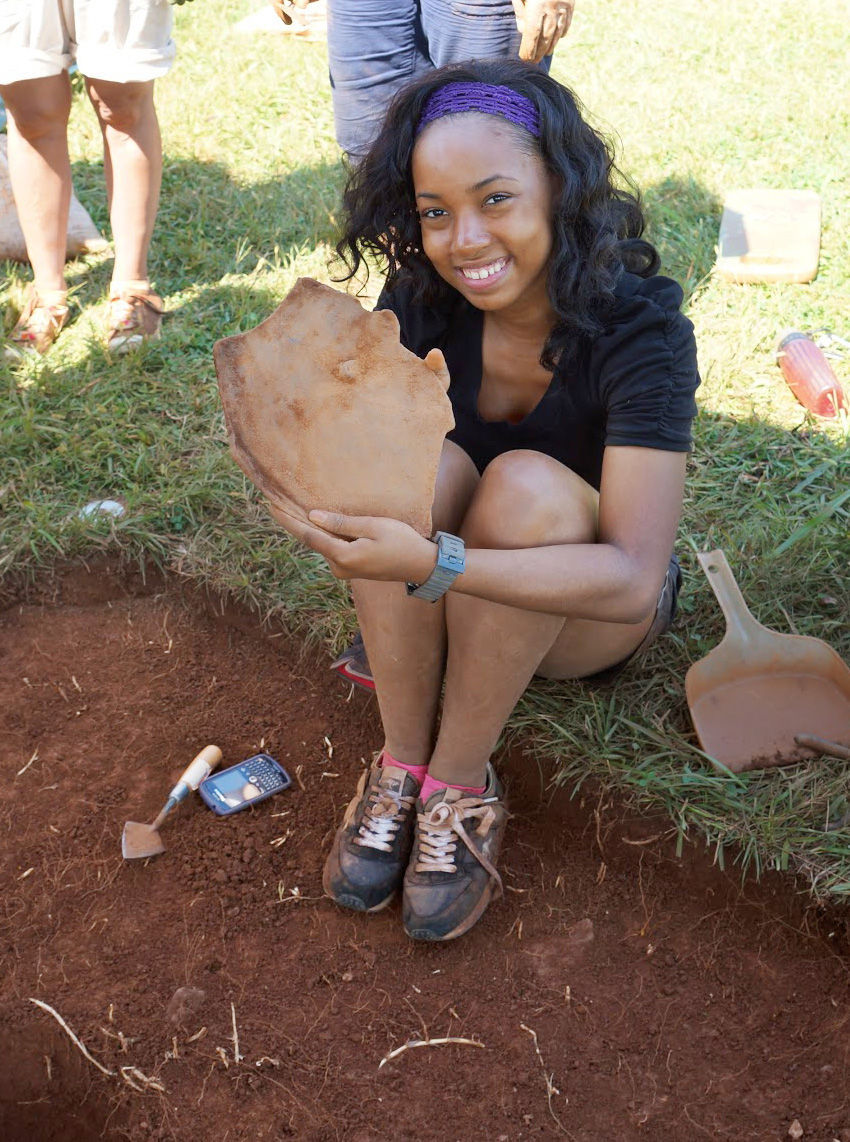 Michelle Taylor uncovered a broken iron Dutch oven and ties to her ancestors during an excavation at Montpelier. Taylor, who grew up in Detroit, graduated from VCU in August as an anthropology and Spanish double-major. 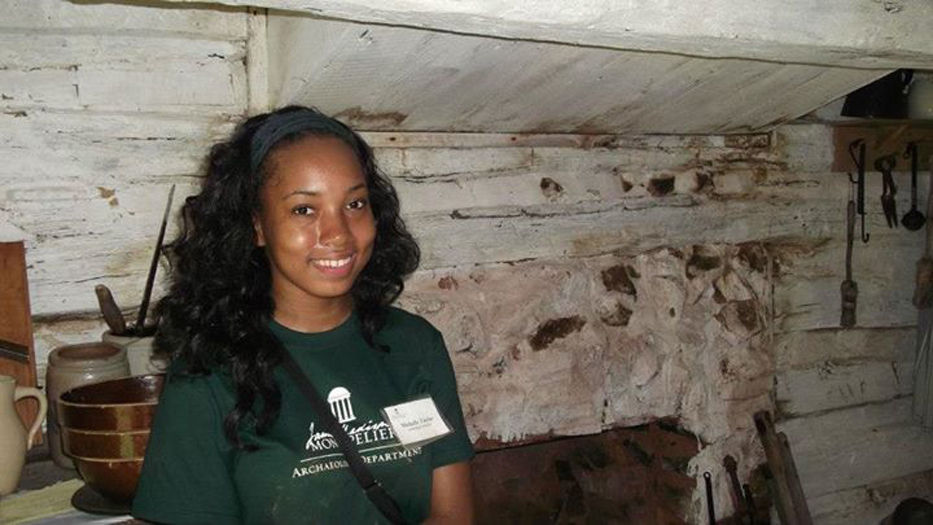 Michelle Taylor, an anthropology student at Virginia Commonwealth University, stands inside the former home of her ancestor, George Gilmore, whose restored 1870s log cabin at James Madison’s Montpelier stands as the first preserved and interpreted freedman’s home in the United States.

When Michelle Taylor moved from Detroit to Henrico County, she found herself, discovered her life’s passion and unearthed an ancestral legacy she didn’t know existed.

As an anthropology student at Virginia Commonwealth University, Taylor learned that her family tree has roots in Virginia. She explored those roots during an archaeological dig at the field slave quarters at James Madison’s Montpelier, where a relative, George Gilmore, was born into slavery in 1810.

Gilmore would gain his freedom and build a cabin a mile from Montpelier from the remains of a Confederate camp. He died in 1905. The cabin is believed to be the first freedman’s site in the nation to be preserved to give the public the opportunity to see the transition from slavery to freedom.

Her hands-on experience at the Orange County historic site, and its connection to her family, had a profound effect on Taylor, 24, who graduated in August as an anthropology and Spanish double-major.

Before the experience at Montpelier, “I wasn’t even sure I wanted to stay in my program,” she said during an interview at VCU’s Cabell Library, where she works as a library assistant.

“I love anthropology, I love archaeology. But I said, ‘What am I really going to do with this afterwards?’ After going there, I just knew this program was meant for me,” she said.

Taylor said Gilmore — a carpenter, saddle-maker and farmer — was the great-grandfather of her great-uncle’s wife. She had listed him on her family tree earlier but didn’t know anything about his connection to Montpelier and the nation’s fourth president.

She has made many more connections since her arrival in the Richmond area in 2010. Her family tree has grown from 20 people to more than 1,100, including great-great-great-grandfather Thomas Bentley Barrett, who was born in Richmond and was sold to a family in Henderson, Ky.

As far as Taylor knew, Kentucky was the ancestral home of her family before some of its members relocated to Detroit as part of the Great Migration, the movement of millions of African-Americans from the rural South to industrialized areas in the Northeast, Midwest and West between 1910 and 1970.

That migration has since begun to reverse itself as the economies of Rust Belt cities have tanked — none worse than Detroit, once the fifth-largest U.S. city. Its population peaked at 1.85 million in 1950, but the city now has fewer than 700,000 residents.

When Taylor was growing up, her mother, then a public schoolteacher, attempted to shelter her daughter from the urban desolation, decay and strife. But eventually, Taylor took notice.

As the illegal drug trade established a foothold in their neighborhood and vacant houses grew to vastly outnumber occupied dwellings, Taylor and her mom, Camille Smith, left Detroit for Richmond. Taylor says her mom could not sell their early 1900s brick duplex, which now belongs to the city.

“It’s heartbreaking, because that’s the only home I ever knew,” she said.

A neighbor in Detroit had talked up Virginia, and Taylor had visited Richmond and VCU and liked what she saw. After a semester at Wayne State University, Taylor and her mom headed south.

A cousin who grew up with her mom had told Taylor that she had family in Virginia, and dropped the name Gilmore. The name meant nothing to Taylor at the time. But after moving here, she did a Google search and found photos of George Gilmore’s cabin, and of living family members excavating the site.

She told VCU anthropology professor Bernard Means what she had discovered, and he urged her to head to Montpelier to excavate. She spent one week there in August 2012 and returned there last month.

“My push is always for my students to get practical experience in the field they’re interested in,” Means said Thursday. “The only way you’ll know if you really want to do it is to actually do it.”

And Taylor seemed tailor-made for the task at Montpelier.

Not much was written about the enslaved during that era, and the enslaved themselves were forbidden from learning to read — a clear impediment to creating a written history. At historic sites such as Montpelier, “they’re all using archaeology to tell the story of people who otherwise would be lost to history,” Means said.

But, as he notes, the folks who ply this trade rarely look like Taylor. “There are a tiny, tiny, tiny amount of African-Americans in the archaeology field.”

Taylor, for her part, says she plans to pursue a master’s degree in genetic counseling at VCU, incorporating what she has learned about genealogy with family medical histories. Ultimately, she wants to teach.

The discovery of her Virginia heritage made the move here an unexpected homecoming. But mostly, it created a hunger in Taylor to connect the genealogical dots for other families. She estimates that she has done 25 to 30 family histories. “I love it.”

Taylor said she is also attempting to find other Montpelier slave descendants, so that they might benefit from the work of Matthew Reeves, director of archaeology and landscape restoration at the historic site in Orange County.

“Reeves offers a lot of descendants programs to participate in archaeology on the land of their enslaved family members,” she said. “So I think it’s very important that we have that outreach and have their voices being heard when decisions are made.”

Her introduction to Gilmore has left her with conflicting emotions.

“I was very proud. That’s the immediate emotion,” she said. “But as I look more into his background and other people in my family, it was very sad, because they never got to have the full reward of their hard labor.

“We have to just preserve their history and take advantage of everything that’s offered nowadays,” she said. “I feel just so much more impassioned to keep pushing, because I know I have the opportunity.”

Michelle Taylor uncovered a broken iron Dutch oven and ties to her ancestors during an excavation at Montpelier. Taylor, who grew up in Detroit, graduated from VCU in August as an anthropology and Spanish double-major.

Michelle Taylor, an anthropology student at Virginia Commonwealth University, stands inside the former home of her ancestor, George Gilmore, whose restored 1870s log cabin at James Madison’s Montpelier stands as the first preserved and interpreted freedman’s home in the United States.