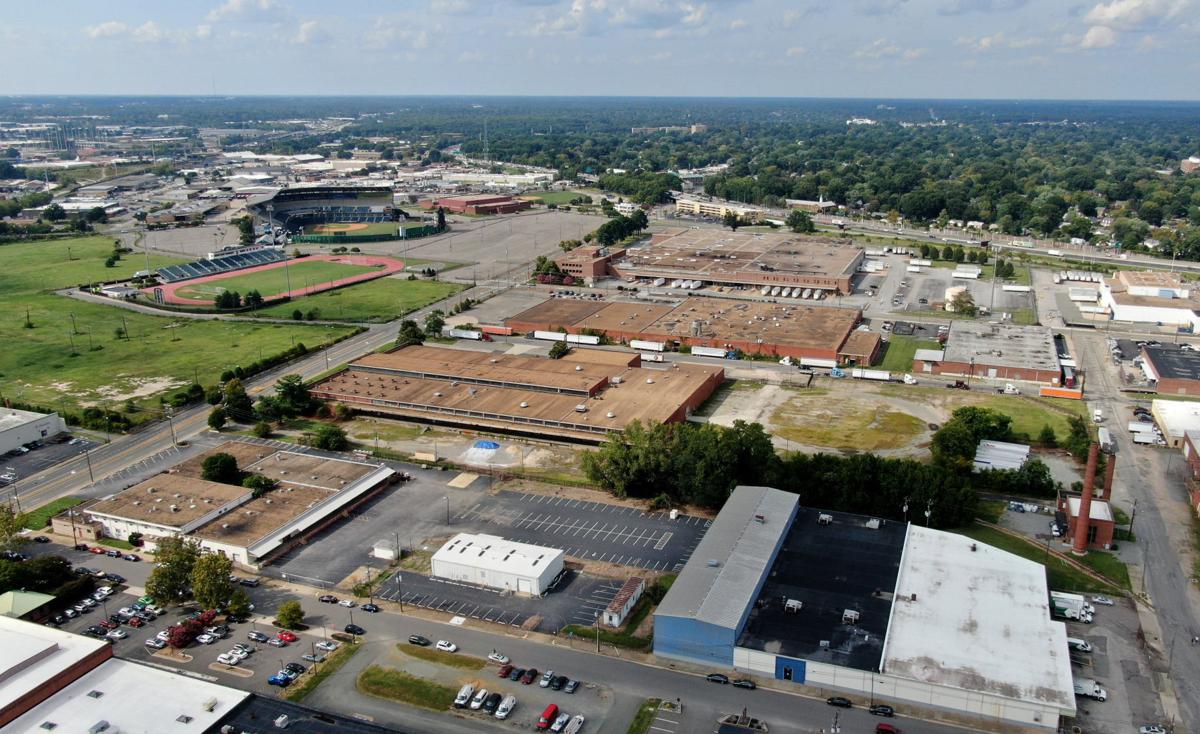 The Diamond and Sports Backers Stadium, seen on the left in this aerial photo, are across Hermitage Road from a Virginia Alcoholic Beverage Control Authority warehouse facility, seen at top center. Tentative plans for the Hermitage Road and Arthur Ashe Boulevard area call for a 100-acre economic development project involving VCU and the city to include a new ballpark and VCU Athletics Village. 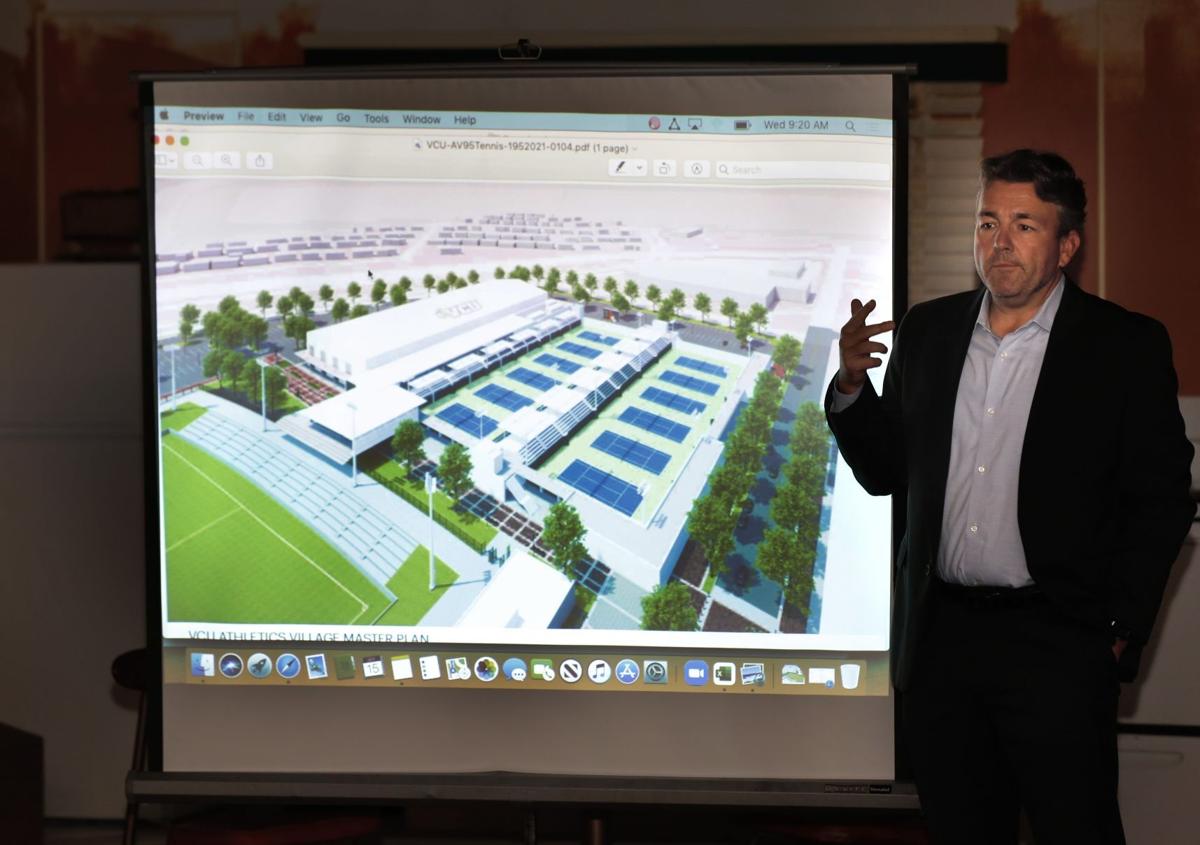 Ed McLaughlin, the vice president and director of athletics at Virginia Commonwealth University, presented a plan for the VCU Athletics Village Wednesday at the Richmond Triangle Players theater.

Ed McLaughlin, Virginia Commonwealth University’s vice president and director of athletics, advised that a Wednesday presentation should not be misinterpreted as a formal announcement of a 100-acre economic development project involving the school and the city of Richmond. Plans could change during the coming months and years.

Beyond the disclaimer, McLaughlin and Leonard Sledge, the city economic development director, provided a fuller picture – though still incomplete – of coming development around Arthur Ashe Boulevard and the Hermitage Road corridor.

A new ballpark on city-owned land that will be shared by the Double-A Richmond Flying Squirrels and VCU, and the school’s Athletics Village that will cost between $80 million and $100 million, are scheduled to eventually rise in those areas. McLaughlin recognized the Athletics Village, to be built on 40 acres of property acquired by the school, as “one of the most exciting projects we’ve had in the last 20 years at VCU.”

In 2016, VCU and the Flying Squirrels entered into a nonbinding memorandum of understanding that established their intention to construct and share a ballpark “in close proximity to the current location of The Diamond.”

That Athletics Village could be a half-decade or longer away from completion, according to McLaughlin, who indicated the earliest construction could start is next summer. The ballpark, to be built on a portion of the city’s 60-acre site that will also include mixed-use development, may be fast-tracked.

“We understand that there are time pressures to have a replacement stadium in place,” Sledge said. “We’re mindful and sensitive to those things. Of course, we want to do everything that we can.”

Following the 2019 season, Major League Baseball assumed operational control of the minors and defined stadium standards. The Diamond, opened in 1985, does not comply, putting Richmond at risk of eventually losing affiliated baseball, as it did in 2009 when the Triple-A Richmond Braves left town for Gwinnett, Ga., because of dissatisfaction with The Diamond.

Lou DiBella, the Flying Squirrels president and managing general partner, said the team needs to be in a new ballpark by 2025. The development plan has the new ballpark on The Diamond’s side of Hermitage Road, near the current site of Sports Backers Stadium.

Sledge reiterated the city’s position that by the end of the year, “there will be a request for interest out on the street. And it’s our goal and objective to generate as much interest from the development community to respond to that opportunity because, again, it is a significant opportunity.”

The timeline for ballpark completion will become clearer following that process of determining a development team for the area that will include the ballpark, according to Sledge. He said he was unable at this time to provide stadium cost or capacity estimates, or a financing plan.

A new ballpark could draw fresh interest from MLB organizations. The Washington Nationals have in past years explored Richmond as home for one of their affiliates, and a return to Triple-A is possible for Richmond, now home to a San Francisco Giants farm club.

Sledge said he did not have the answer yet as to whether the ballpark would be owned by the city or VCU as part of the Athletics Village.

McLaughlin and Sledge appeared at Richmond Triangle Players, an 80-seat performing arts venue, at the invitation of the Greater Scott’s Addition Association. Supplying a virtual message was Todd Parnell, CEO of the Flying Squirrels, who was away from Richmond on a business trip.

McLaughlin said the school and the city learn about community concerns and ideas as plans are rolled out in public forums, which led to Wednesday’s presentation attended by approximately 60.

VCU acquired about 40 acres along the Hermitage Road corridor for the Athletics Village, which will include an indoor-outdoor tennis center (six indoor courts, 12 outdoor), a field house with an indoor track surrounding a turf surface, practice fields for multiple sports, and a new soccer stadium with an outdoor track to replace Sports Backers Stadium.

McLaughlin projected that the Athletics Village, filling a desperate need for Rams facility enhancements, will be “transformative for our athletic department, and I really do believe it’s going to be transformative for the area as well.” The tennis complex will be open to the public and include youth programming, according to McLaughlin.

“We expect these facilities to be used 250, 300 days a year. This isn’t just VCU’s going to drop right in here and it’s not going to be able to be used by the community,” McLaughlin said of the Athletics Village. “It’s going to be community use as well.”

McLaughlin said funds for the Athletics Village are being raised through private channels, and other funding sources he did not detail.

VCU is under contract to purchase a 5.8-acre office and warehouse space at 1609 Sherwood Ave. currently owned by Bourne Enterprises, according to the university’s website and confirmed by McLaughlin on Wednesday. The university expects the sale to close next month at a cost of $7.3 million.

“That is under contract and we’ll move that soon,” McLaughlin said.

The purchase will connect land already owned by VCU with the Virginia Alcoholic Beverage Control Authority facility located at 2901 Hermitage Road, which VCU will buy soon.

The General Assembly determined a sale price of the 20-acre facility at $16 million and appropriated $14.7 million for the purchase. VCU will use athletics funds to cover the remaining $1.3 million, according to the university’s website. VCU has not determined when it will complete the deal.

The university’s board of visitors could approve both purchases when it meets Friday.

“My last conversation with them is that they will sell off all the alcohol they have in this warehouse,” McLaughlin said. “They’re not going to move it. So, as soon as they can do that — at the end of the year, probably — they’ll look to do that.

“And we obviously have a lot on our plate to get ready for it. We’re on their timeline, and that’s OK.”

In the past year and a half, VCU has purchased the Greyhound Lines building along Hermitage Road for $11.8 million, the Salvation Army facility one block south for $4.3 million and the nearby James River Distillery building for $183,000.

Following the in-progress sale of the warehouse space at 1609 Sherwood Ave. and the acquisition of the ABC property, VCU does not have subsequent plans to buy land for the Athletics Village.

The school plans to launch the largest athletics fundraising campaign in its history to raise money for the project. That may begin later this year.

The Diamond and Sports Backers Stadium, seen on the left in this aerial photo, are across Hermitage Road from a Virginia Alcoholic Beverage Control Authority warehouse facility, seen at top center. Tentative plans for the Hermitage Road and Arthur Ashe Boulevard area call for a 100-acre economic development project involving VCU and the city to include a new ballpark and VCU Athletics Village.

Ed McLaughlin, the vice president and director of athletics at Virginia Commonwealth University, presented a plan for the VCU Athletics Village Wednesday at the Richmond Triangle Players theater. 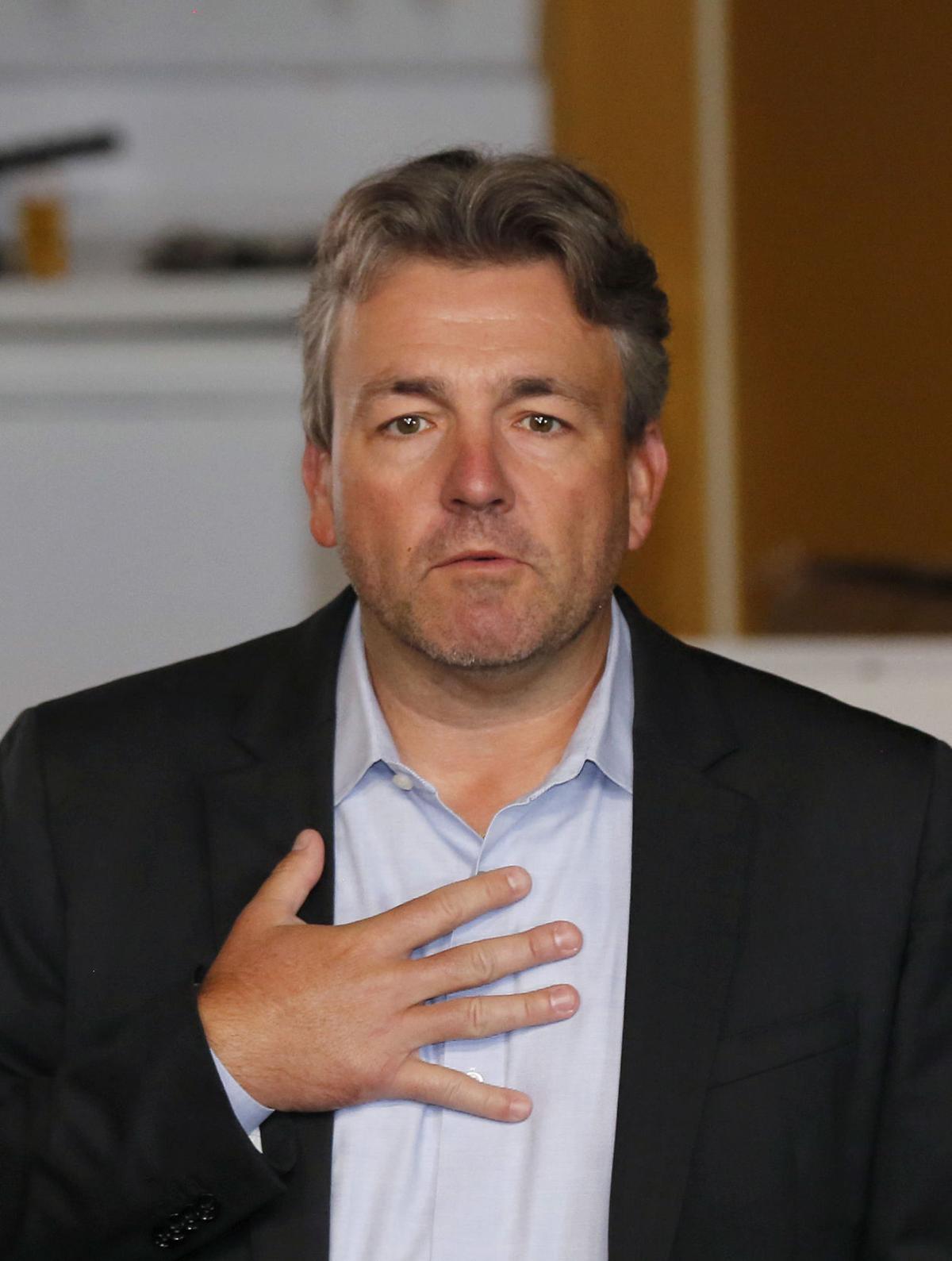 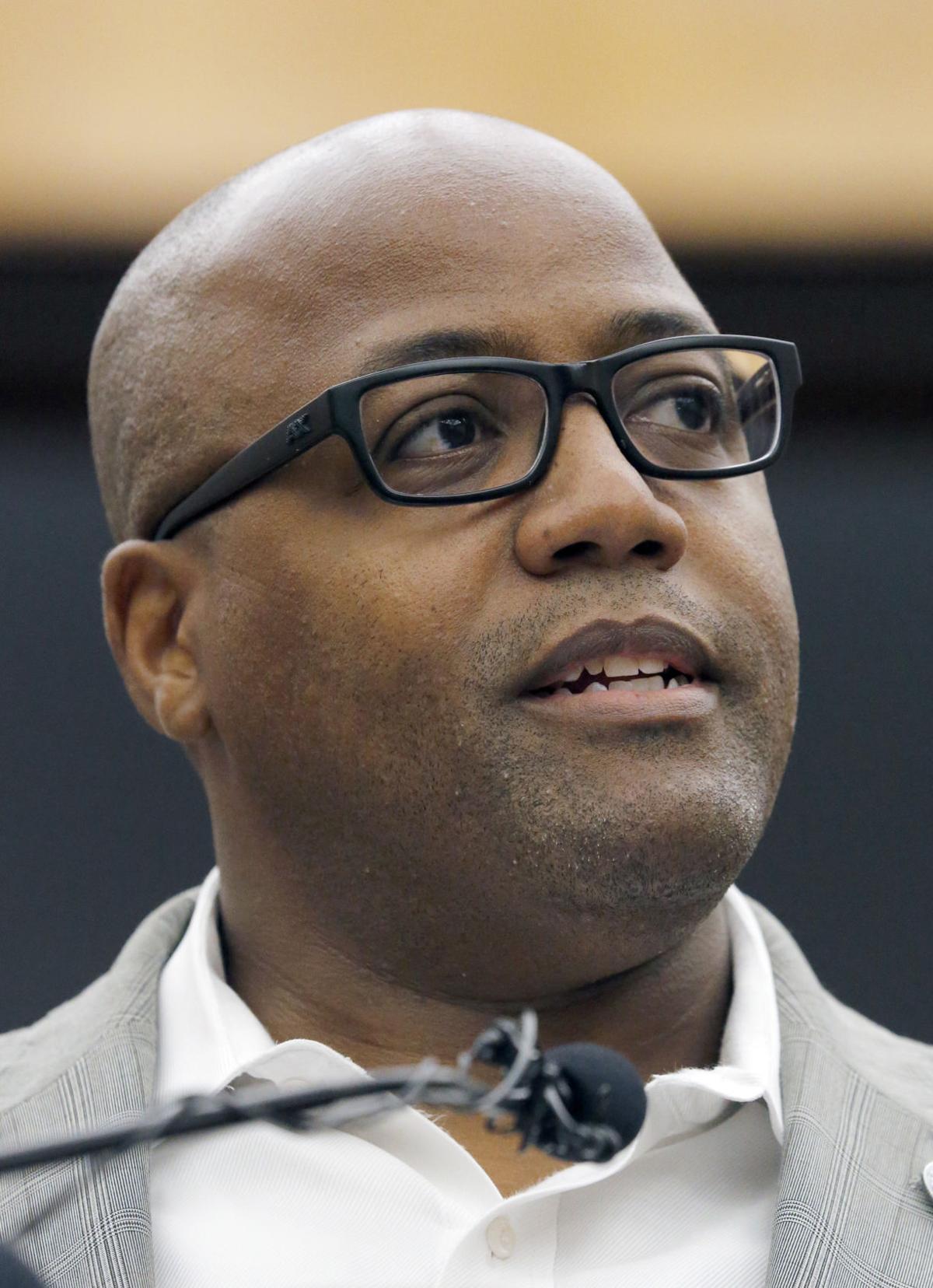