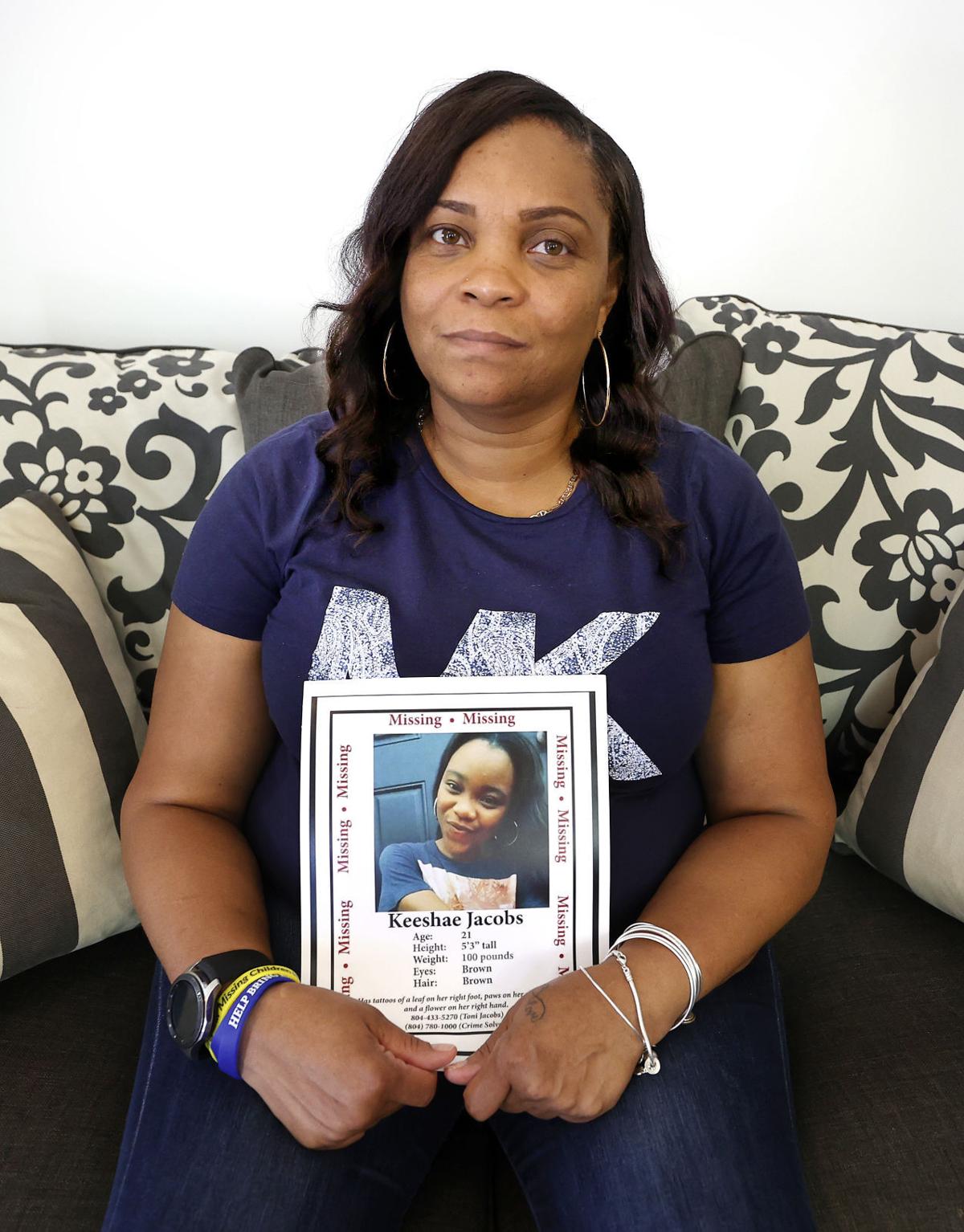 Toni Jacobs holds a photo of her daughter Keeshae Jacobs, who went missing five years ago. Photo was taken on Friday, September 24, 2021. 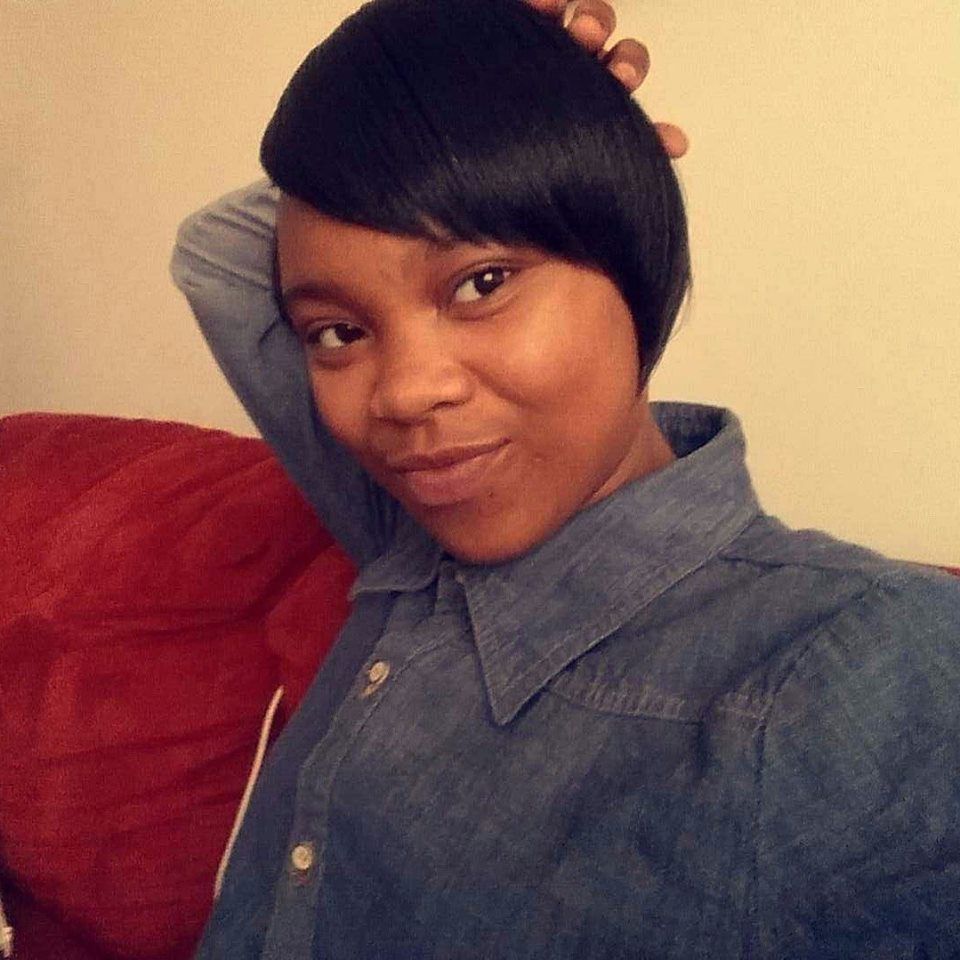 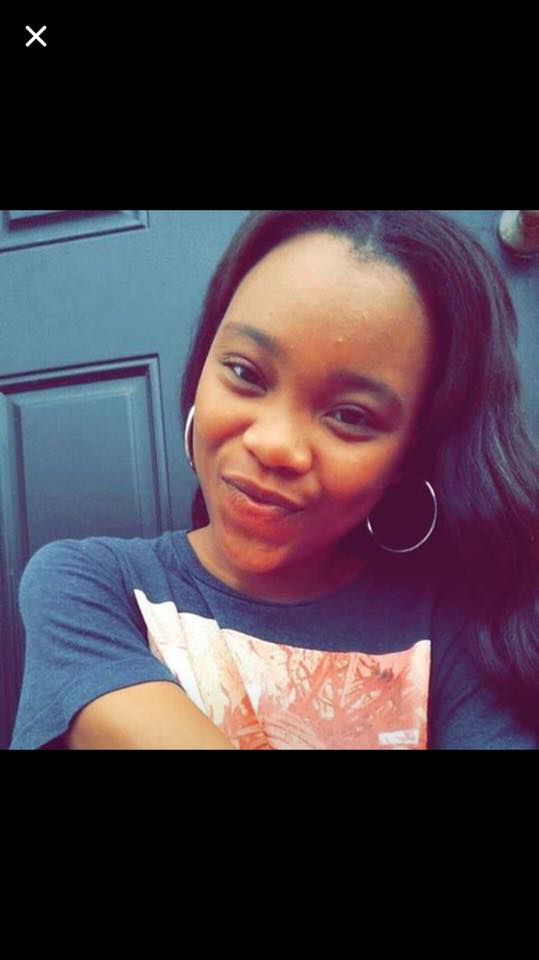 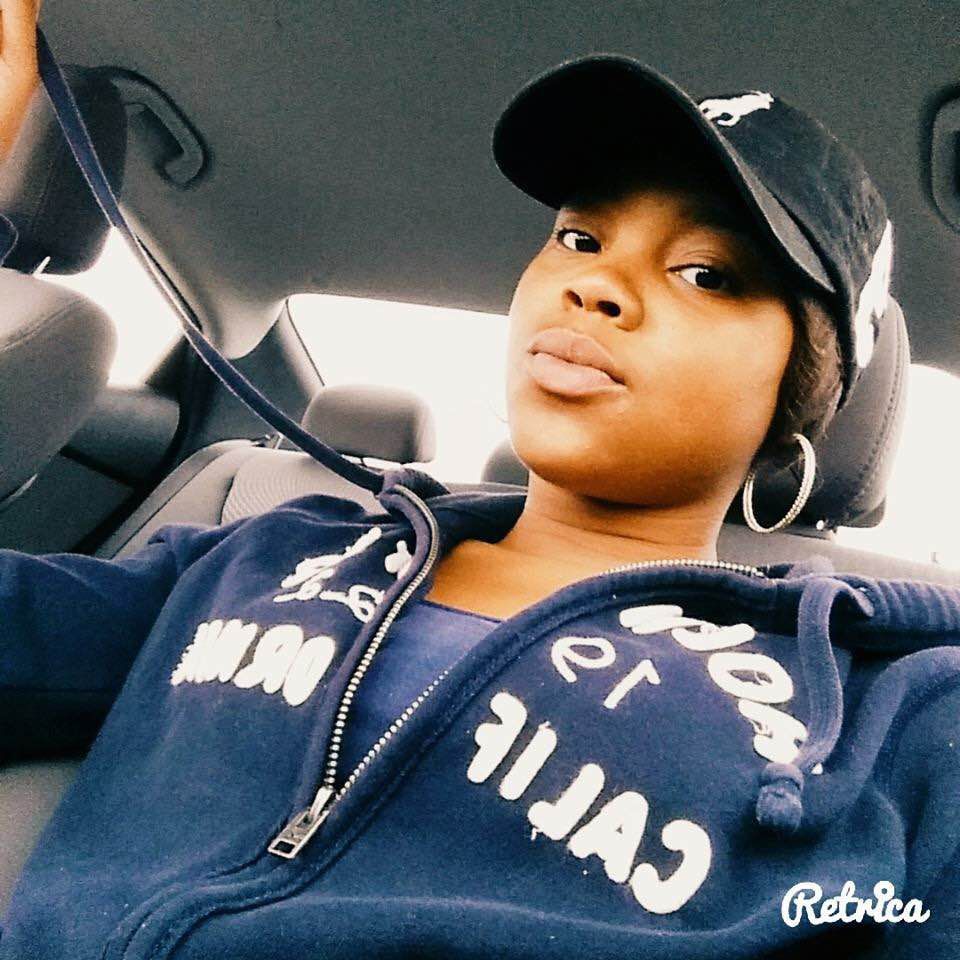 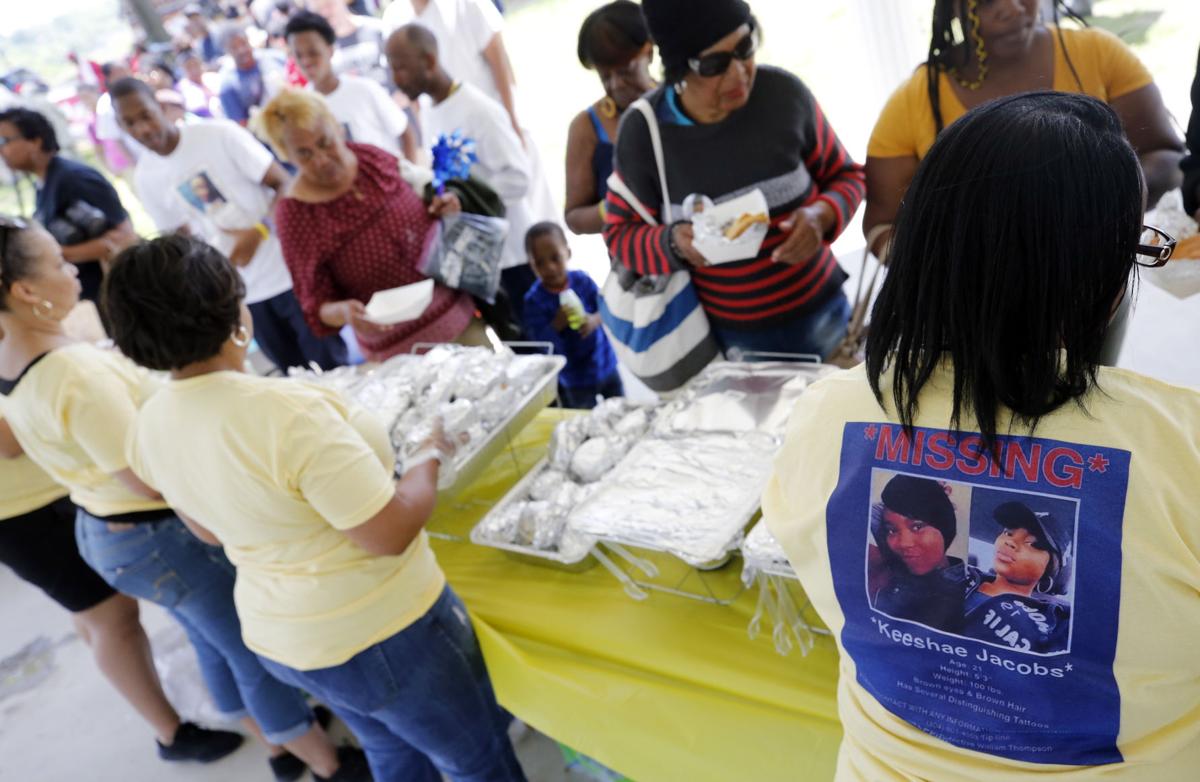 Keeshae Jacobs, who has been missing since 2016, was featured on volunteers’ T-shirts in Richmond on Saturday during the second annual rally to mark Missing Persons Day. 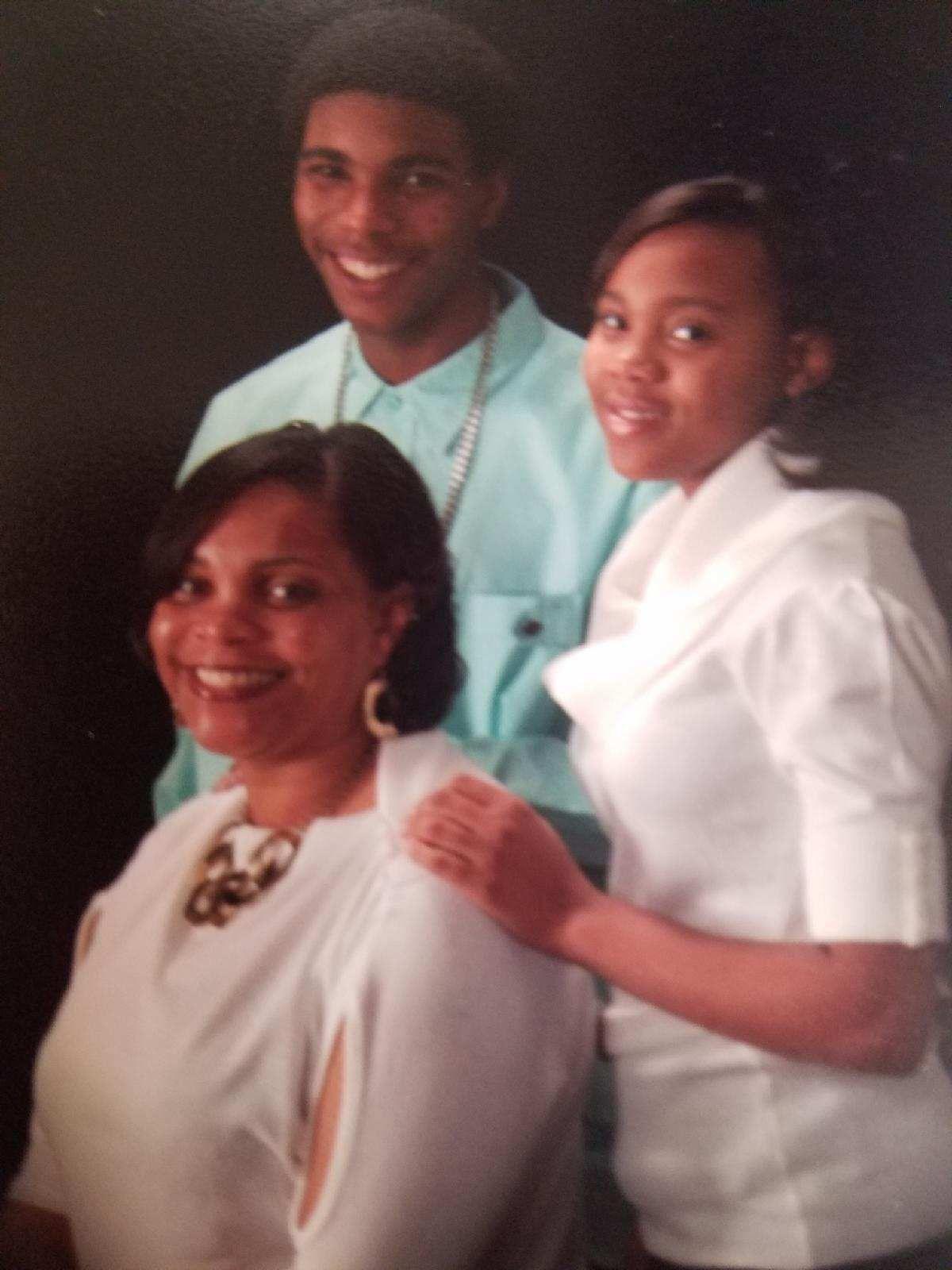 Deavon and Keeshae urged their mom to enroll at J. Sargeant Reynolds Community College. Toni Jacobs will get a certificate in substance abuse counseling from the school on Sunday. 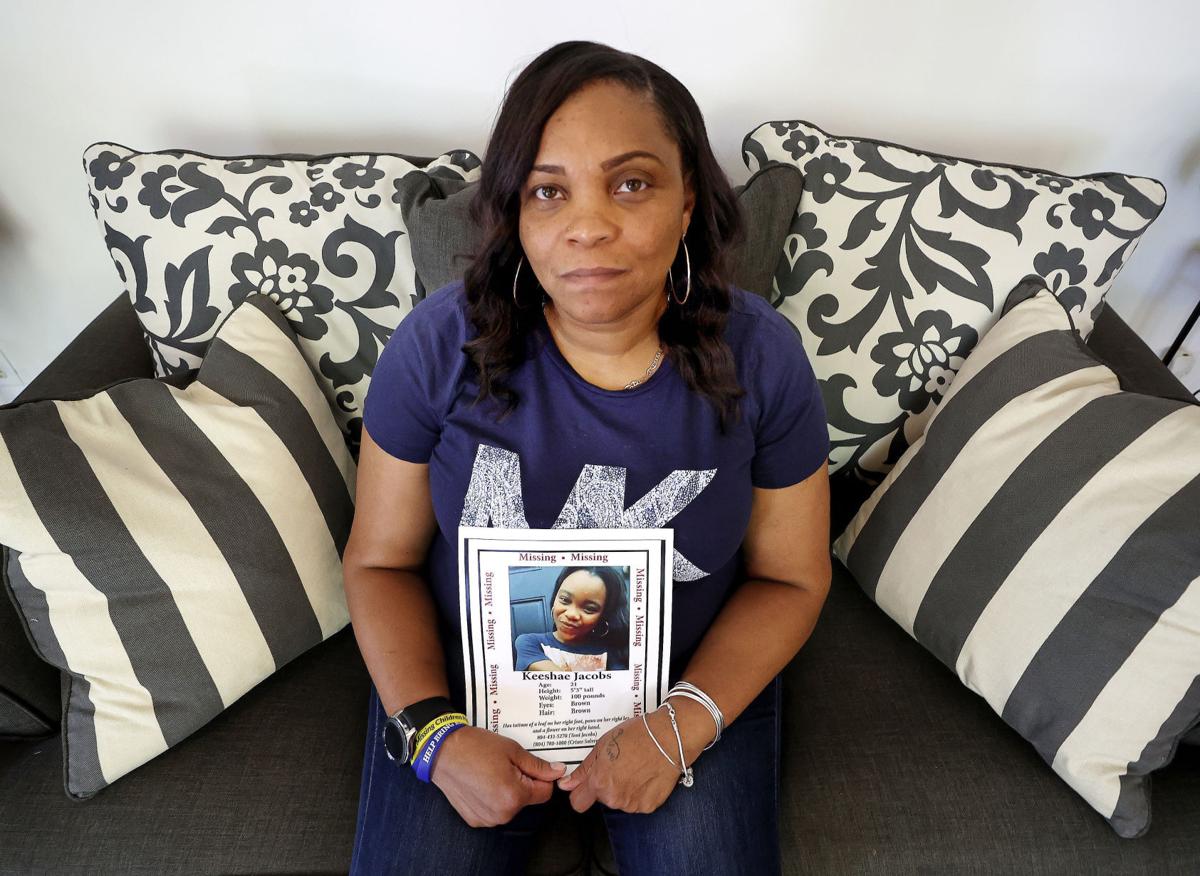 Watching the attention Gabby Petito’s case received, Toni Jacobs grew frustrated, then angry, at the lack thereof for her daughter’s case, which remains open and unsolved.

So when Jacobs first heard news of Gabrielle “Gabby” Petito’s disappearance, she did what she has reflexively done since her own daughter, Keeshae, vanished in Richmond in September 2016 at the age of 21: She shared info about Petito on social media, and hoped police would find her alive.

The search for Petito, who is white, became a national story this month. Primetime cable news coverage and daily dispatches from national publications detailed the all-hands-on-deck response from local, state and federal law enforcement. Investigators recovered her remains last week in Wyoming.

Watching the attention Petito’s case received, Jacobs grew frustrated, then angry, at the lack thereof for her daughter’s case, which remains open and unsolved. Sunday marks the five-year anniversary of Keeshae’s disappearance. Her mother can’t help but wonder if she’d have answers by now if police and media treated Keeshae’s case with the same urgency as Petito’s, not “just another Black girl missing.”

“My heart breaks for everybody that has someone missing or murdered, but at the same time, none of this stuff was done for my baby,” Jacobs said in an interview. “It makes me think what could they have done better, and if they would have done the same thing they did in Gabby’s case, would Keeshae be home?”

Coverage of Petito’s case spurred new scrutiny of how media covers missing persons cases, as well as disparities in which victims receive attention for a crime that disproportionately affects people of color. Jacobs is among roughly 90,000 people who were missing across the country at the end of 2020, according to an FBI database. Of those, about a third are Black, more than twice their share of the general population.

Black people who are reported missing are less likely to receive media coverage than victims who are white, according to a 2016 Northwestern University School of Law study authored by criminologist Zach Sommers.

“As a culture we are readily willing to accept stories about white folks as victims as something we should care about,” Sommers told CNN last week in a story that highlighted Jacobs’ and other unsolved cases involving people of color. “When we see a white person who has gone missing, we say that could be my daughter, neighbor or cousin or friend ... and they identify with that person and are more likely to read the story than we would if it were a person of color.”

In the immediate aftermath, Jacobs’ disappearance received modest coverage from local news outlets but commanded little, if any, from those with national reach.

The Richmond Times-Dispatch published one story about it that calendar year, 10 days after Keeshae was last seen as she was dropped off in the 3100 block of East Broad Street, a gentrifying section of Church Hill near popular parks and restaurants. She had gone to spend the night with a friend and did not return home the next day as expected.

Her mother began calling her phone repeatedly, but she never answered. That was unusual, Toni Jacobs said. Fearing the worst, she went to the police station to report her missing. There, she said she was met with skepticism, not the urgency and support she was expecting.

“The officer said, ‘She’s 21. How do you know she doesn’t want to be bothered?’ I said, ‘Really?’” Jacobs recalls. “I had to literally plead her case, I felt like, for him to take down the information.”

A round of coverage coincided with the one-year anniversary of her disappearance. Shortly after that, police announced they suspected foul play in her disappearance, a suspicion Jacobs feels they should have shared publicly and acted upon sooner. Why the Richmond Police Department then did not immediately request assistance from the FBI puzzled Jacobs. She called the agency to make a plea herself, she said, to no avail.

The city’s website lists a dozen people whom police are searching for, with the oldest case dating back to 1990. Eight of the 12 are Black, including the six people who have been missing for the longest.

The last substantive round of coverage the case received locally came two years after Keeshae’s disappearance. Jacobs raised $3,000 to offer as a reward for information leading to an arrest and conviction in her daughter’s case. Police have released no new information in the years since.

What attention the case has generated since then is due to Jacobs’ persistence to raise awareness about it and the plight of families with missing loved ones.

That’s a testament to her fortitude, said Richmond police Sgt. Carol Adams, who has grown close with Jacobs through the ordeal. Adams is not involved in the investigation itself, but Jacobs said she has been a key part of her support system on the darkest days. Less than four months after Keeshae went missing, Jacobs’ son, Deavon, was shot and killed at a hotel on Midlothian Turnpike.

In the face of tremendous grief and trauma, Jacobs hasn’t wavered in her mission to bring her daughter home, Adams said.

“It’s just her strength, the strength to get up and keep going every day and to make sure people are going to see her daughter and see her fliers,” Adams said. “She’s going to be that force and keep trudging along. That speaks volumes as to who she is as a person and a woman, and a mother.”

With support from Adams and the police department, Jacobs launched an annual “Missing Persons Day” event in 2017 to focus attention on cases that seldom receive it. She hosted its fourth event this past spring, gathering with about 75 people at Chimborazo Park, she said. One local outlet covered it.

Jacobs recently met with representatives from the police department. A new detective is now leading her daughter’s investigation, she was told, but there was no new information beyond that, she said. A police spokeswoman did not immediately respond to questions about whether the department has any new leads in the case.

“It’s just so frustrating, but it makes me fight harder, and I’ve always told people that if I don’t fight for my daughter, who else is going to fight for her?” Jacobs said. “It’s obvious that [police] want to remove themselves from the situation. But if it was their child, they would want someone to do something more than what they’ve done.”

Toni Jacobs holds a photo of her daughter Keeshae Jacobs, who went missing five years ago. Photo was taken on Friday, September 24, 2021.

Keeshae Jacobs, who has been missing since 2016, was featured on volunteers’ T-shirts in Richmond on Saturday during the second annual rally to mark Missing Persons Day.

Deavon and Keeshae urged their mom to enroll at J. Sargeant Reynolds Community College. Toni Jacobs will get a certificate in substance abuse counseling from the school on Sunday.

Watching the attention Gabby Petito’s case received, Toni Jacobs grew frustrated, then angry, at the lack thereof for her daughter’s case, which remains open and unsolved. 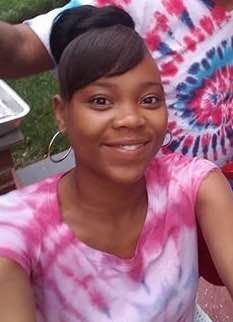 Keeshae Jacobs vanished in Richmond in September 2016 at the age of 21.