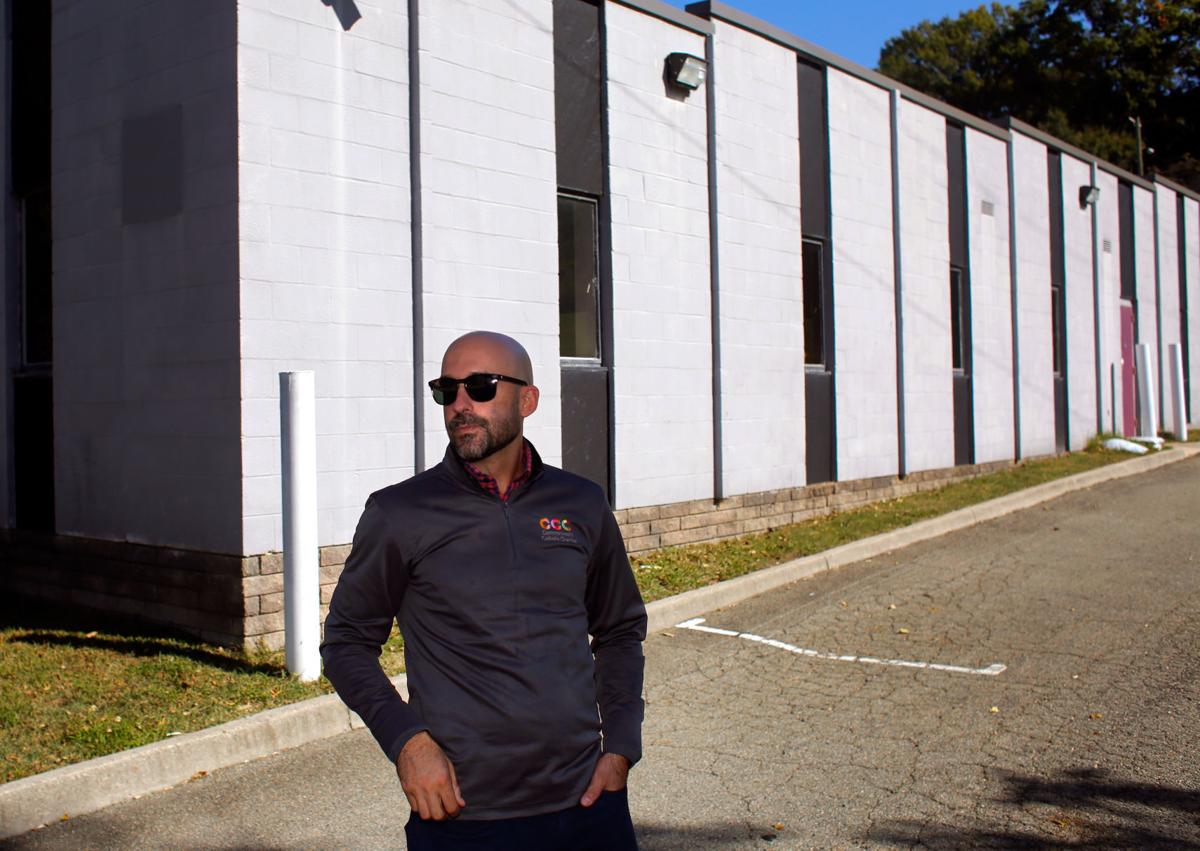 Jay Brown, CEO of Commonwealth Catholic Charities, stands outside 809 Oliver Hill Way in Richmond. The nonprofit is renovating the building, which will house the city’s new inclement weather shelter. 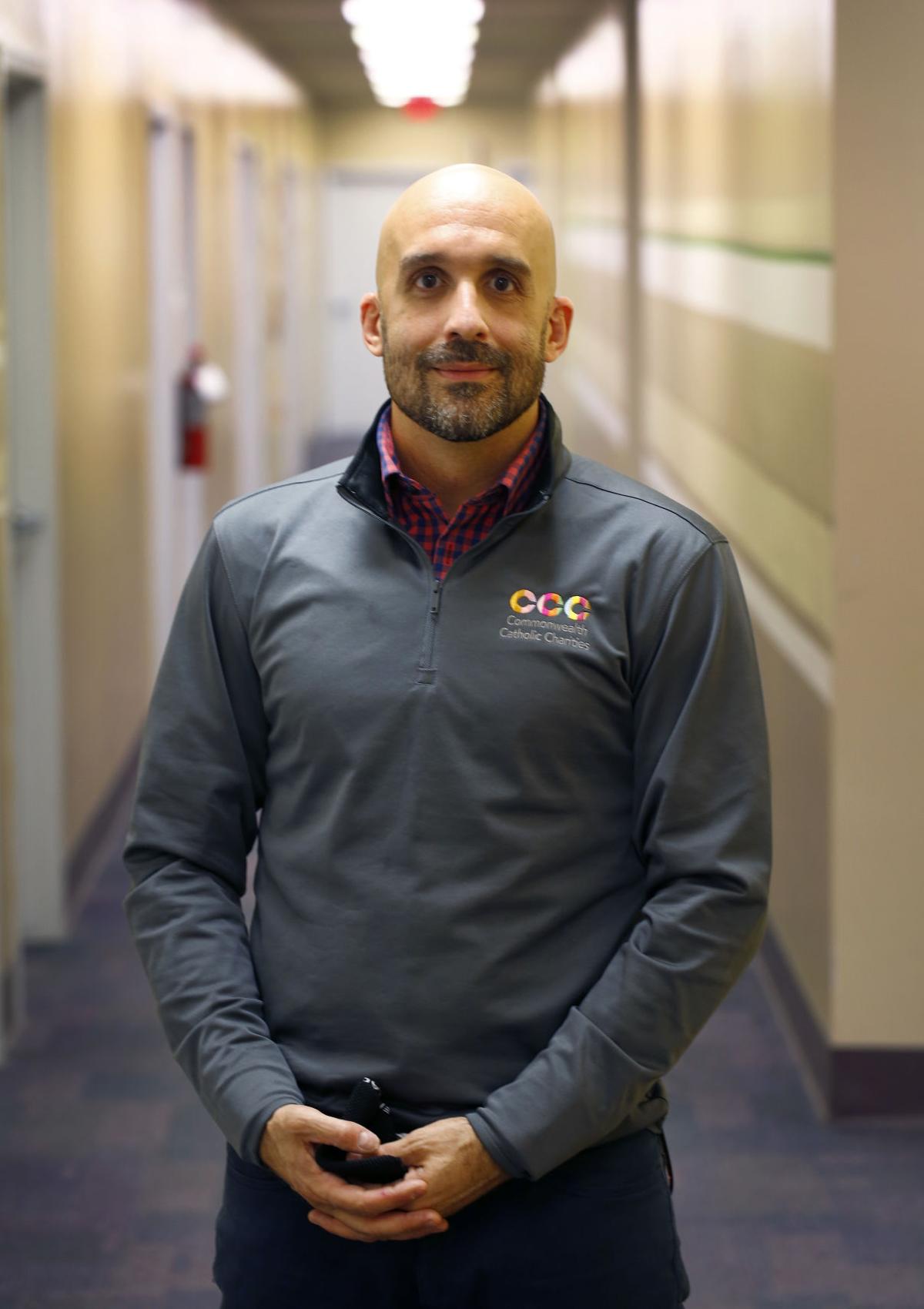 Jay Brown, president and CEO of Commonwealth Catholic Charities, is shown 809 Oliver Hill Way building in Richmond on Wednesday, Oct. 20, 2021. The nonprofit organization is going to run the city's new inclement weather shelter in the part of the building in Shockoe Valley. 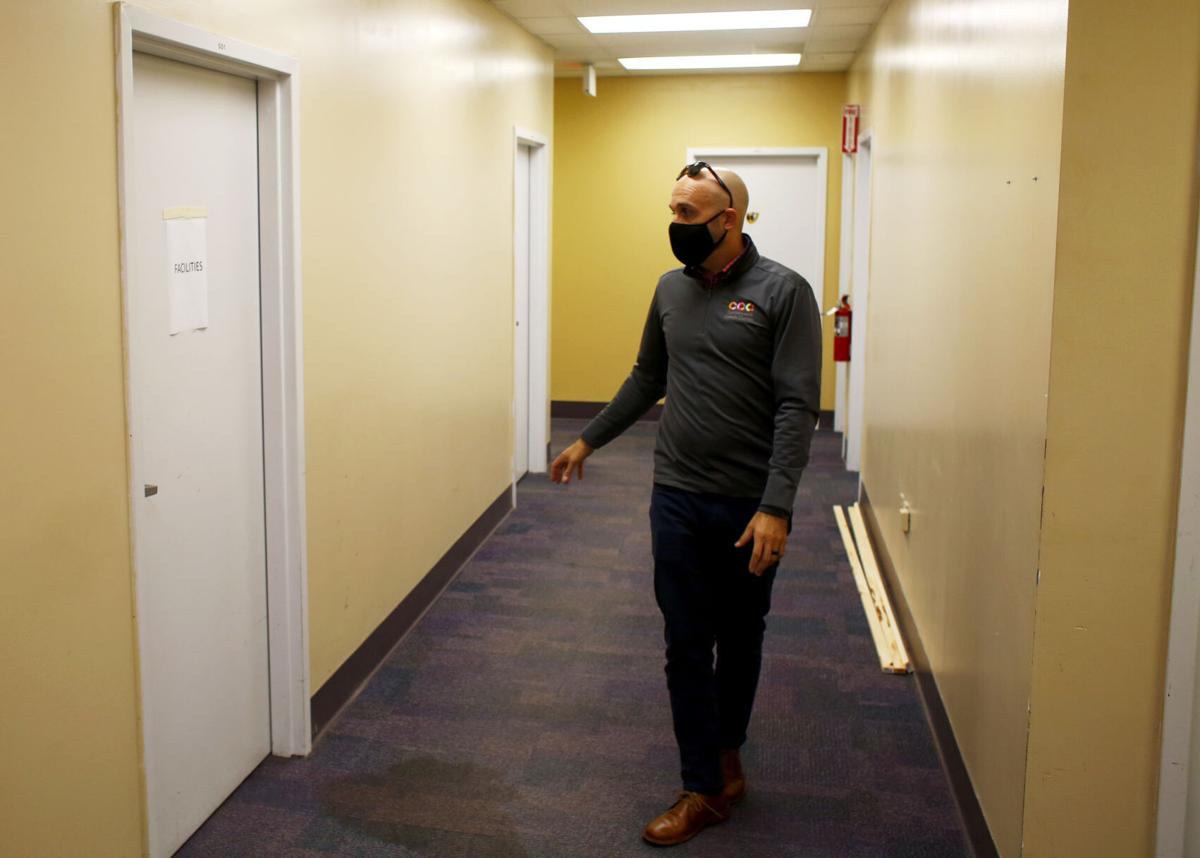 Jay Brown walks inside the Shockoe Valley facility that will become an inclement weather shelter. After renovations, the building will offer up to 75 beds nightly through mid-April.

The shelter of last resort for people experiencing homelessness in the Richmond region will return to Shockoe Valley this winter.

Commonwealth Catholic Charities is poised to renovate its facility at 809 Oliver Hill Way to accommodate a new inclement weather shelter. The Richmond City Council voted earlier this month to direct $1.8 million of federal funding to the effort. Work on the space will begin in the coming weeks and is expected to take three to four months. Once completed, as many as 75 emergency beds will be available nightly through mid-April.

“We found [the location] to be closer to our target population — people who are not connected to other providers in the system, people who are living outside, the unsheltered and people who are looking for access,” said Jay Brown, CCC’s chief executive officer. “Making sure we have safe space for people to go is in the front of everyone’s mind.”

After an initial surge during the pandemic, the number of people experiencing homelessness in the region declined from 838 to 699 between January and July, according to a single-night count conducted this summer by nonprofits that aid the homeless in the Greater Richmond Continuum of Care.

That figure covers people who are homeless and classified as sheltered because they slept in shelters or supportive housing programs on the night of the count. The number of unsheltered people — those sleeping in a place deemed unsuitable for human habitation — doubled in that six-month span, from 98 to 197.

Establishing a permanent location is meant to bring stability to a resource that dozens without shelter rely on during the coldest winter nights, when other homeless shelters in the region are at capacity.

Unlike in past winters, the forecast temperature will not dictate whether the shelter opens its doors. After the renovation, it will open every night until mid-April. Other weather events — like heavy rain, high winds or extreme heat — will trigger its opening throughout the rest of the year.

“We think that will be a significant improvement for individuals who are using the shelter because they’ll be able to plan night to night,” Brown said. Connecting those individuals with other programs available in the Greater Richmond Continuum of Care network of homeless service providers will be easier, too, he said.

Clearing the way for the new facility are zoning changes Richmond Mayor Levar Stoney proposed and the council approved earlier this year. Prior to the changes, homeless service providers like CCC faced a lengthy, and often contentious, special-use permit process to secure approval for new facilities. Pushback from civic associations and businesses could delay or sink plans.

CCC has owned the Oliver Hill Way facility since 2019. It houses the nonprofit’s administrative offices, housing resource center and youth hub, which serves 18- to 24-year-olds experiencing a housing crisis. The young adult program will remain in the building but will be separated from the emergency shelter space, Brown said.

The new space will have showers and storage for belongings. Meals will be served on site, Brown said. There will also be space for other providers to meet with individuals who are seeking other services, he said.

CCC will operate the emergency shelter at a temporary location while renovations at its Shockoe Valley facility are completed. Beds will be available at the Quality Inn ballroom on Arthur Ashe Boulevard beginning on Nov. 1, Brown said.

“I’m hopeful we can get it set up as quickly as possible and we can move out of the hotel space,” said Stephanie Lynch, the 5th District councilwoman and chairwoman of the council’s Education and Human Services Standing Committee.

Lynch aided people struggling to access the hotel-based emergency shelter program last year amid the COVID-19 pandemic. She advocated for changes to the old model and an intake process she said was too cumbersome for people in crisis. Previously, people would have to call a hotline and register for one of the beds. Getting someone on the phone was a challenge, depending on the time and day of the week, advocates said.

Lynch said she was encouraged CCC will allow on-site registration for people who are seeking shelter.

"There are Black and brown people who grew up in Richmond, over 55 years old, who say: ‘I love Richmond, but sometimes I don’t think Richmond loves me back.’ That’s devastating to hear."

Renée Thompson Truehart often posts pictures, videos and memes on TikTok, Facebook and Instagram. So when she came across a toddler wandering in the middle of a dark street in Highland Springs in freezing temperatures, she started recording video from her phone even before she stopped her car to help the child.

Sean Bennett started throwing up blood, so he went to the emergency room at LewisGale Hospital Montgomery near his home in Southwest Virginia.…

Jay Brown, CEO of Commonwealth Catholic Charities, stands outside 809 Oliver Hill Way in Richmond. The nonprofit is renovating the building, which will house the city’s new inclement weather shelter.

Jay Brown, president and CEO of Commonwealth Catholic Charities, is shown 809 Oliver Hill Way building in Richmond on Wednesday, Oct. 20, 2021. The nonprofit organization is going to run the city's new inclement weather shelter in the part of the building in Shockoe Valley.

Jay Brown walks inside the Shockoe Valley facility that will become an inclement weather shelter. After renovations, the building will offer up to 75 beds nightly through mid-April.