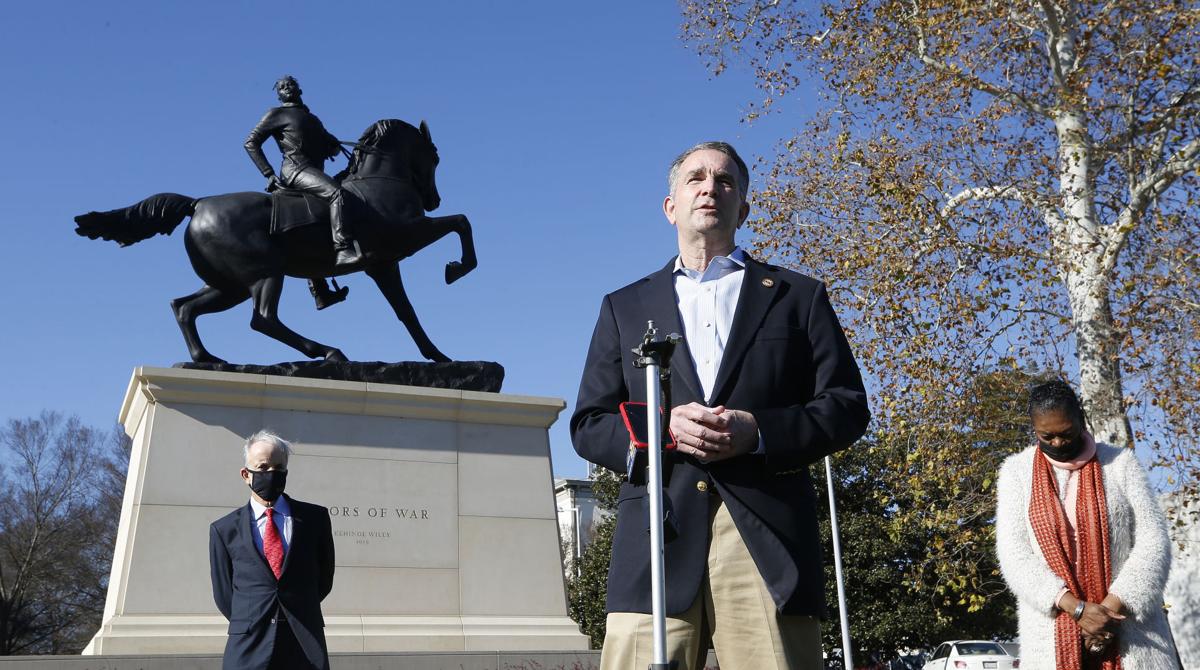 Alex Nyerges, director of the Virginia Museum of Fine Arts, and Del. Delores McQuinn, D-Richmond, listen as Gov. Ralph Northam talks about a $25 million plan to invest in "historic justice initiatives" around the state during a press conference at the Rumors of War statue at VMFA Fri., Dec. 11, 2020. 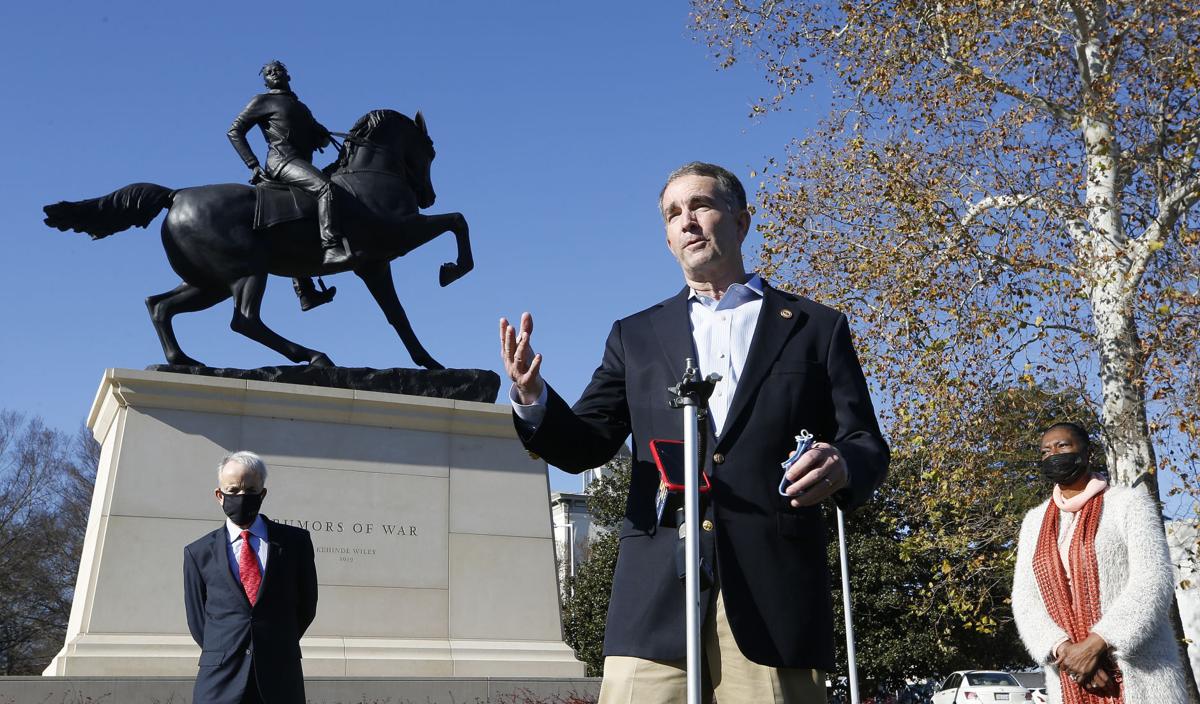 Gov. Ralph Northam announced Friday that his next budget proposal will include $25 million to transform Richmond’s Monument Avenue and support other historic sites tied to the city’s slavery heritage.

Speaking before the Rumors of War statue on Arthur Ashe Boulevard, Northam said he has tapped the Virginia Museum of Fine Arts to lead an effort to develop new ideas and plans for the street following the removal of the city’s Confederate monuments earlier this year.

“This brings continued justice to [Richmond],” he said. “We want to move forward in partnership with VMFA to bring people to the table and make Monument Avenue ... welcoming for everyone.”

About half of the proposed money would help plan and build new statues on Monument; $9 million would fund development of a museum at the Lumpkin’s Jail site in Shockoe Bottom and improve the city’s Slave Trail. Northam proposed $100,000 to support the planned Virginia Emancipation and Freedom Monument on Brown’s Island.

The remaining $5 million would support a new memorial site for tombstones that were taken from a historic African American cemetery in Washington, D.C., and used as riprap for a farm along the banks of the Potomac River in King George County about 60 years ago.

While the state-owned statue of Robert E. Lee on Monument Avenue remains standing, Northam and his staff said it will come down next year, potentially as soon as February or April, pending an appeal of a court ruling.

Alex Nyerges, CEO and director of the VMFA, said the museum plans to bring together historians, artists and urban planners from around the world to work with the community in Richmond to develop new plans for the circle around the Lee statue and the rest of Monument Avenue.

“We’re looking forward to a 21st century future that’s going to be inspiring and bright for all of Virginia,” he said. “130 years of having those monuments scar the landscape and the souls of the people who have lived in the city and Virginia will take a great deal of thought and effort.”

Northam said the effort may cost more than the $11 million in his budget proposal. Nyerges concurred, noting that the total cost for the Rumors of War statue outside of the VMFA was about $3 million.

The governor said the private sector could assist with raising funds for the project, but that additional state funding may be added.

Clark Mercer, the governor’s chief of staff, said the city of Richmond would be responsible for the $9 million allocated for the development of the city’s slave trail and a museum that’s been in the works for several years at Lumpkin’s Jail.

“What the funds would do is help bring us closer to erecting a museum there, memorializing the site and the trail and the history of enslaved Africans that helped build this nation,” said Del. Delores McQuinn, D-Richmond. “It will help recreate a new Virginia.”

Also known as the Devil’s Half Acre, the site was a pre-Civil War slave-trading compound. It later became a Black seminary that was a forerunner of Virginia Union University.

Local and state leaders have intended to make the site a prominent museum that explains the city’s history as the nation’s second largest slave-trading hub before the Civil War.

In July, Richmond Mayor Levar Stoney pledged $25 million to $50 million over the next five years to memorialize the enslaved people who were sold in Shockoe Bottom. The money would supplement millions in state and local dollars the city set aside under former Mayor Dwight C. Jones.

“This constitutes a massive investment in centering stories of trauma and resilience that have been sidelined by proponents of slavery, the Lost Cause, and segregation,” Stoney said of the governor’s funding proposal.

Northam is slated to share the full details of his next budget proposal to the state’s Joint Money Committees on Wednesday.

Alex Nyerges, director of the Virginia Museum of Fine Arts, and Del. Delores McQuinn, D-Richmond, listen as Gov. Ralph Northam talks about a $25 million plan to invest in "historic justice initiatives" around the state during a press conference at the Rumors of War statue at VMFA Fri., Dec. 11, 2020.