Earlier this month, grass was seen growing up through the sidewalk in front of the deserted Richmond Coliseum. The redevelopment plan led by NH District Corp. includes building a 17,500-seat arena that would be the largest in Virginia. 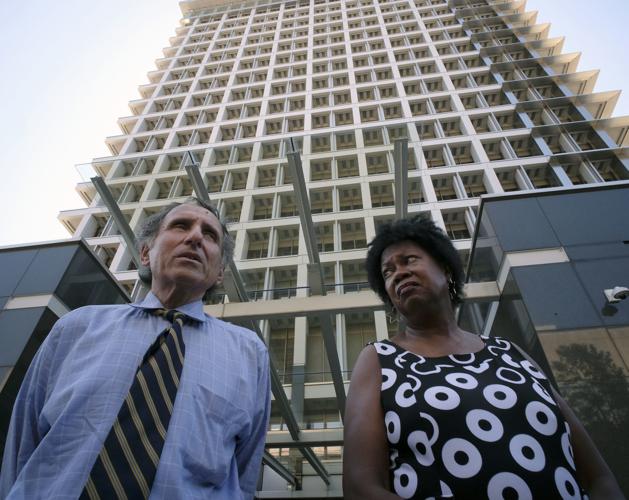 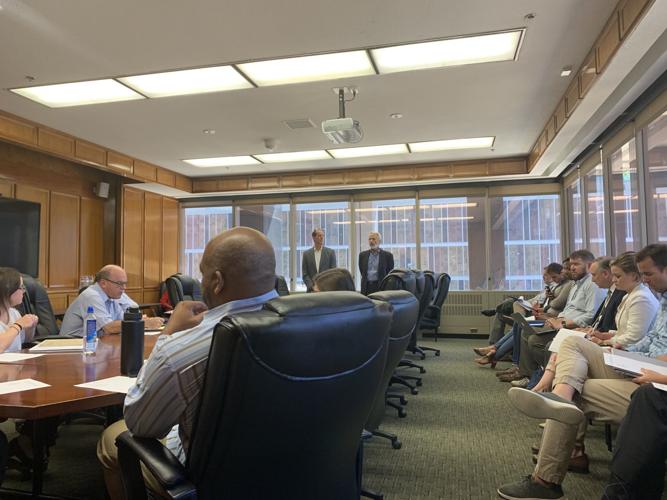 Pierce Homer and John Gerner, the chairman and vice chairman of the Navy Hill Development Advisory Commission, announce their nominees to the commission in the second floor conference room inside Richmond City Hall on Aug. 30, 2019. 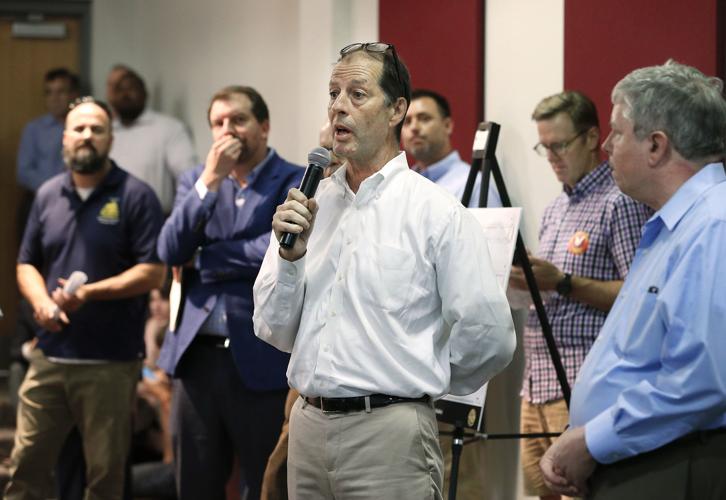 The effort to have a referendum on a proposed city charter change that could stymie the proposed $1.5 billion coliseum redevelopment project isn’t dead yet.

Paul Goldman, a former head of the Democratic Party of Virginia, filed an appeal Friday that contests a ruling earlier this month by the Richmond general registrar that Goldman’s petition drive didn’t gather enough signatures to qualify for the November ballot.

“The registrar is wrong,” Goldman said in an interview. “The people of Richmond are being denied their rights.”

The proposed change to the city charter would require 51% of the money taken in through a special tax zone that is a key part of the redevelopment project’s public financing to fund improvements to the city’s decrepit school buildings.

Goldman and volunteers collected more than 14,000 signatures in support of the referendum. The Richmond registrar’s office reviewed those signatures and found that 9,941 of the signatures belonged to registered voters in the city, a number about 400 below the roughly 10,340 the referendum needed to qualify for the ballot, according to a memo General Registrar J. Kirk Showalter sent the Richmond Circuit Court earlier this month.

In his appeal filed Friday in Richmond Circuit Court, Goldman said there are 2,079 people who signed the petition who weren’t counted by Showalter but should have been. If those 2,079 people were counted, the petition would easily clear the threshold to be on the ballot.

“Based on what we could find, there’s a case to be made that they should be counted,” Goldman said.

Reached by phone Friday afternoon, Showalter said she couldn’t comment on the appeal.

“Because it’s an ongoing legal matter, I really can’t respond to it until it’s resolved,” she said. “There are always two sides to the story and the court will make the determination.”

The coliseum redevelopment plan — being led by NH District Corp., a nonprofit — calls for a 17,500-seat arena, the largest in the state; a high-rise hotel with at least 525 rooms; 2,500 apartments, with 480 reserved for people earning less than the region’s median income; 1 million square feet of commercial and office space; 260,000 square feet of retail and restaurant space; renovation of the historic Blues Armory; and a new transfer plaza for GRTC Transit System bus riders, among other things.

The proposed charter change would affect the creation of a tax increment financing district where all new real estate tax revenue from the zone, which would span a downtown area that is about eight times larger than the 10-block area containing the redevelopment, would go toward debt payments on a $350 million bond offering for the arena.

Also Friday, the leaders of a citizen commission tasked with reviewing the project announced their nominations for the other members of the group.

“We will be nine volunteers with a $5,000 budget to look at a [$1.5 billion] project and a couple thousand pages,” Homer said Friday. “That’s a daunting task.”

Homer, who lives on the city’s North Side, was Virginia’s secretary of transportation under Govs. Mark Warner and Tim Kaine. He now works as transportation director for Moffatt & Nichol, an engineering firm.

Gerner lives in the Union Hill neighborhood and owns Leisure Business Advisors LLC, a consulting firm that has expertise in leisure development.

The nominees await approval by the City Council, which is scheduled to discuss the appointments at its organizational development meeting Tuesday.

Once a majority of the nine members are seated, the commission will have 90 days to issue a report of its findings to the council. The group is specifically tasked with looking “to validate the assumptions, projections, costs and benefits of the development contemplated by the ordinances and the likely impact of that development on the city,” according to the 2018 ordinance that created the commission.

“There is no such thing as a risk-free project so we want to make sure we identify those clearly,” Homer said.

The commission must hold public meetings and keep minutes of its discussions.

“Our goal is to maximize the opportunity for the public to be involved,” Gerner said.

For more information on the nominees to the Navy Hill Development Advisory Commission, visit Richmond.com.

Earlier this month, grass was seen growing up through the sidewalk in front of the deserted Richmond Coliseum. The redevelopment plan led by NH District Corp. includes building a 17,500-seat arena that would be the largest in Virginia.

Pierce Homer and John Gerner, the chairman and vice chairman of the Navy Hill Development Advisory Commission, announce their nominees to the commission in the second floor conference room inside Richmond City Hall on Aug. 30, 2019. 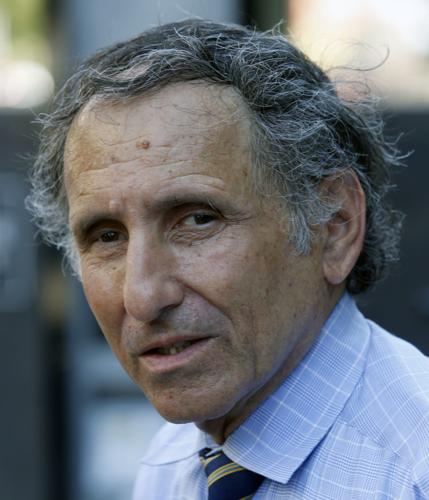