Plummeting reading scores 'a call to action' for Henrico County's Achievable Dream Academy, which is slated to expand
0 comments
Share this
1 of 2 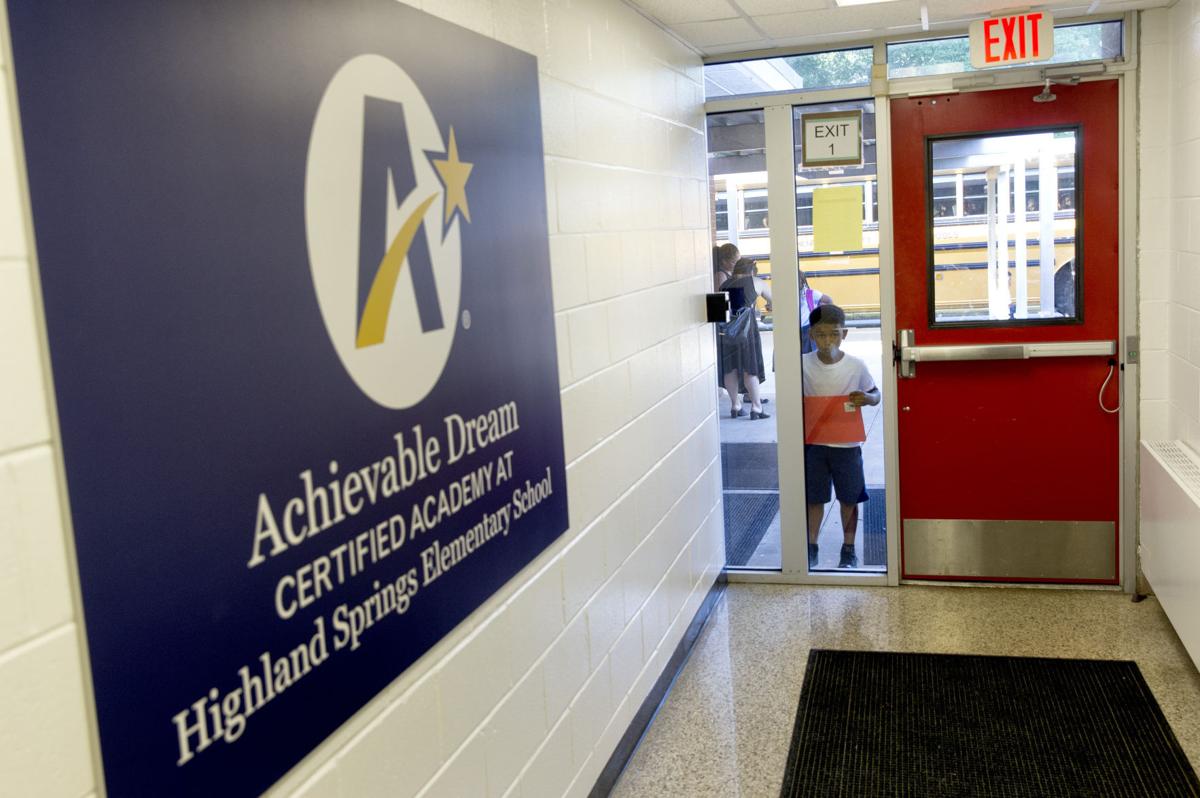 The Achievable Dream Academy at the elementary school reported a significant backslide in reading scores for 2019-2020. 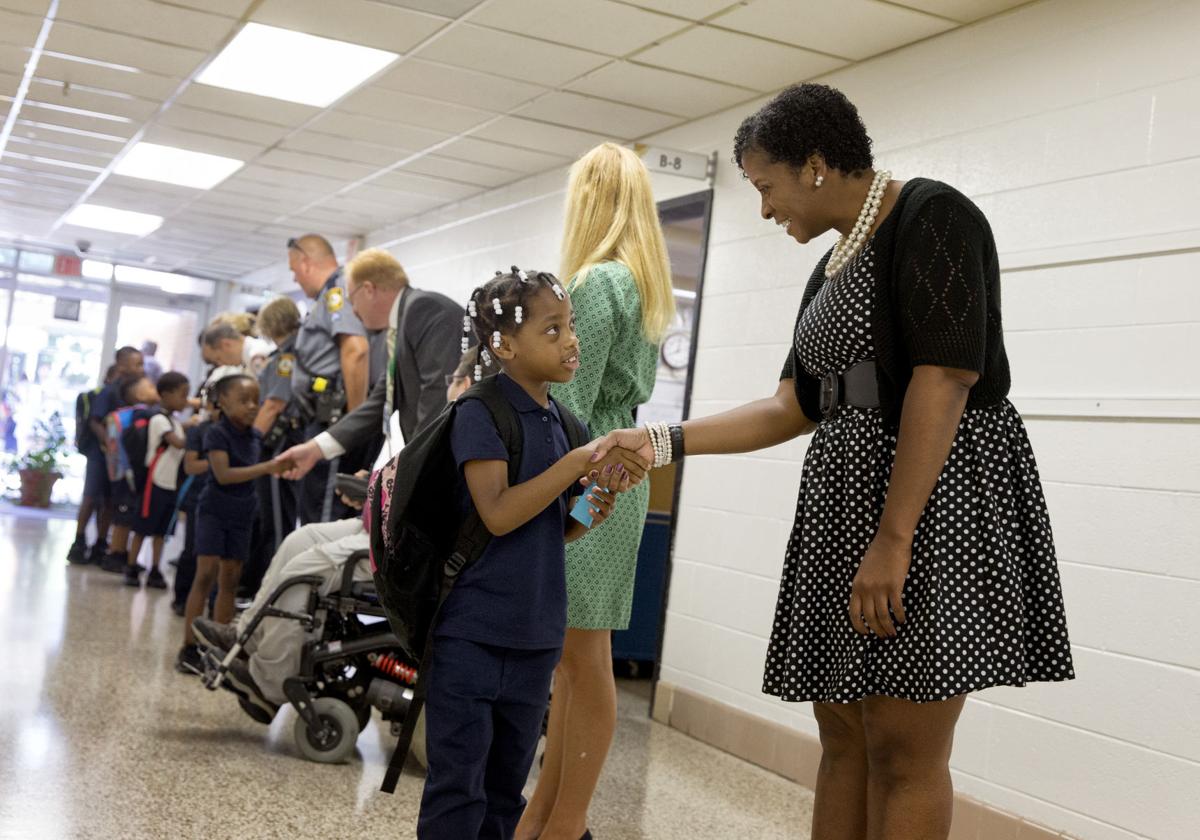 Jai’Anna Robinson, 7 (center), was greeted by Sabrina Richardson, director of certified academies for Achievable Dream Inc., and others during its first day at Highland Springs Elementary School in Henrico County in July 2017.

Before COVID-19 and social distancing measures, students in uniform firmly shook the hands of either a Henrico County law enforcement officer, school administrator or community partner before entering Highland Springs Elementary School each day. The handshakes may temporarily be gone, but students are back in the school, surrounded by banners with positive and encouraging statements.

About half of the inaugural kindergarten class read at or above grade level that first year. By last year, the cohort’s second-grade reading proficiency had dropped to 9%. Districtwide pass rates on state reading tests for third- through eighth-graders dipped from 79% to 76% from 2016 to 2019.

Presented with that backslide last fall, Henrico County School Board member Alicia Atkins called for the academy to be closed, while board members Marcie Shea and Kristi Kinsella questioned the monetary investment in the program.  The decline was especially troubling to Atkins, whose East End district houses the academy and for decades has been home to schools with a high population of Black students and students living in poverty.

Kinsella said at the time she could not contemplate expanding the program to the sixth grade, adding "I just don't know if Achievable Dream is the investment we need to continue to make."

Shea said she had an "issue" with funding resources through Achievable Dream since it's not based in the Henrico school community.

This summer, the academy is growing to include sixth grade, at a cost of $1.4 million.

A K-12 program, the academies expand incrementally, adding a grade level each year. Currently, there are four academies between Newport News and Virginia Beach.

The Achievable Dream nonprofit, based in Newport News, oversees the academy at Highland Springs but is not part of the daily operations. According to the current memorandum of agreement, Henrico County Public Schools is “solely responsible for providing the instructional and support elements common to all HCPS schools, including the core curriculum.”

Varina District Supervisor Tyrone Nelson lobbied to bring Achievable Dream to Henrico years ago after traveling to Newport News to check it out. When Nelson visited, the Newport News Achievable Dream students had a 95% high school graduation rate, with most attending either a two- or four-year college or a trade school, or joining the military.

The graduation track record now is at 100%, and the school’s atmosphere immediately drew him in. Nelson said he became concerned by the calls to close Henrico’s academy, instead of giving the school a chance to grow and mature.

“If you know you have some schools that are struggling, then you need to throw up a code red and hands need to be on deck,” Nelson said. “This school is 90% minority kids and mainly free and reduced lunch. If we can provide them the support, we should.”

According to state data, about nine in 10 Highland Springs students are Black and about 4 in 5 are economically disadvantaged, a rough gauge of poverty.

During the November School Board meeting when test scores and reading levels were discussed, Highland Springs Principal Shawnya Tolliver said a significant amount of her students live with trauma. The school isn’t only helping students academically but also socially and emotionally. Teachers and staff develop strong relationships with their students to help them make progress with problem-solving and trauma.

“I know my students are growing, I know they are growing,” Tolliver said. “Looking at [reading] numbers like this, it doesn’t show you how far a child has gone if they were already behind.” Tolliver was not made available for an interview.

Superintendent Amy Cashwell said in an interview that a number of options are being considered for where the future sixth-graders will attend school come July. Currently, 87 children are listed as fifth-graders at the school in state Department of Education data.

This program costs Henrico County $6.3 million annually to run, but costs increase as grade levels are added, according to the county budget office.

There’s a $500,000 management fee to the nonprofit, and $1 million pays teachers for longer school days and additional learning days.

Without going into detail, Nelson said a new funding model is being explored with the potential for federal and/or state funding for the county’s Achievable Dream program.

According to Henrico County Public Schools data, when the first Achievable Dream school year ended in 2018, the inaugural kindergarten through second-graders were reading at grade level or slightly above at 49% (kindergarten), 39% (first grade) and 52% (second grade). Two years later, the same students’ reading proficiency were 9%, 19% and 18% respectively.

The Virginia Department of Education’s Standards of Learning tests, which are mandated by the state, tell a similar story.

For the state’s third grade reading test, the critical learning year where students are expected to know how to read, 65% of Highland Springs students passed in the year before the academy included them. Then in the 2018-2019 school year, when the academy expanded to third grade, 53% of students passed.

Meanwhile, 89% of third-graders passed at Tuckahoe Elementary, a West End school in a more affluent area of the county.

Scott Thorpe, a director of elementary education for Henrico schools, said presenting Highland Springs’ reading scores in November “was a call to action.”

The school system is buckling down, with a sharp focus on using the extended school day time to provide intensive interventions for students who are behind.

Atkins said in an interview that she’s in a “much better place,” as she sees the school system and nonprofit work toward not only providing a quality education but having an understanding of the students social and emotional needs.

Atkins wants Highland Springs to be a place where teachers feel empowered to voice their suggestions and that the school is a welcoming environment for families. She wants families to be able to walk in and feel the change.

In Atkins eyes, part of the change comes with strengthening the memorandum of agreement between the district and nonprofit She would like to see something legally in place that holds both the nonprofit and school system accountable. Atkins said the memorandum is currently being worked on and because of that, could not provide additional details.

Lee Vreeland, CEO of Achievable Dream, said a revised agreement reflecting the addition of the middle school program will probably be finalized during the summer.

“There’s no blueprint, there’s a model, an Achievable Dream model. But one size does not fit all for all children. Whatever school we go into, we have to make sure that we are adapting our model for the best interest of the children that we are serving in the school,” Vreeland said.

Even during COVID-19, all Achievable Dream academies kept in touch with their families with monthly phone calls and pop-up home visits with baskets filled with goodies and at-home drive-in movie nights through Zoom, a video conference service.

“I think we’re headed towards better. There will be some easy days, there are going to be some very hard days, but we are going to get there because there aren’t any other choices.” Atkins said. “We don’t want to stay where we are. We want to do better.”

The Achievable Dream Academy at the elementary school reported a significant backslide in reading scores for 2019-2020.

Jai’Anna Robinson, 7 (center), was greeted by Sabrina Richardson, director of certified academies for Achievable Dream Inc., and others during its first day at Highland Springs Elementary School in Henrico County in July 2017.