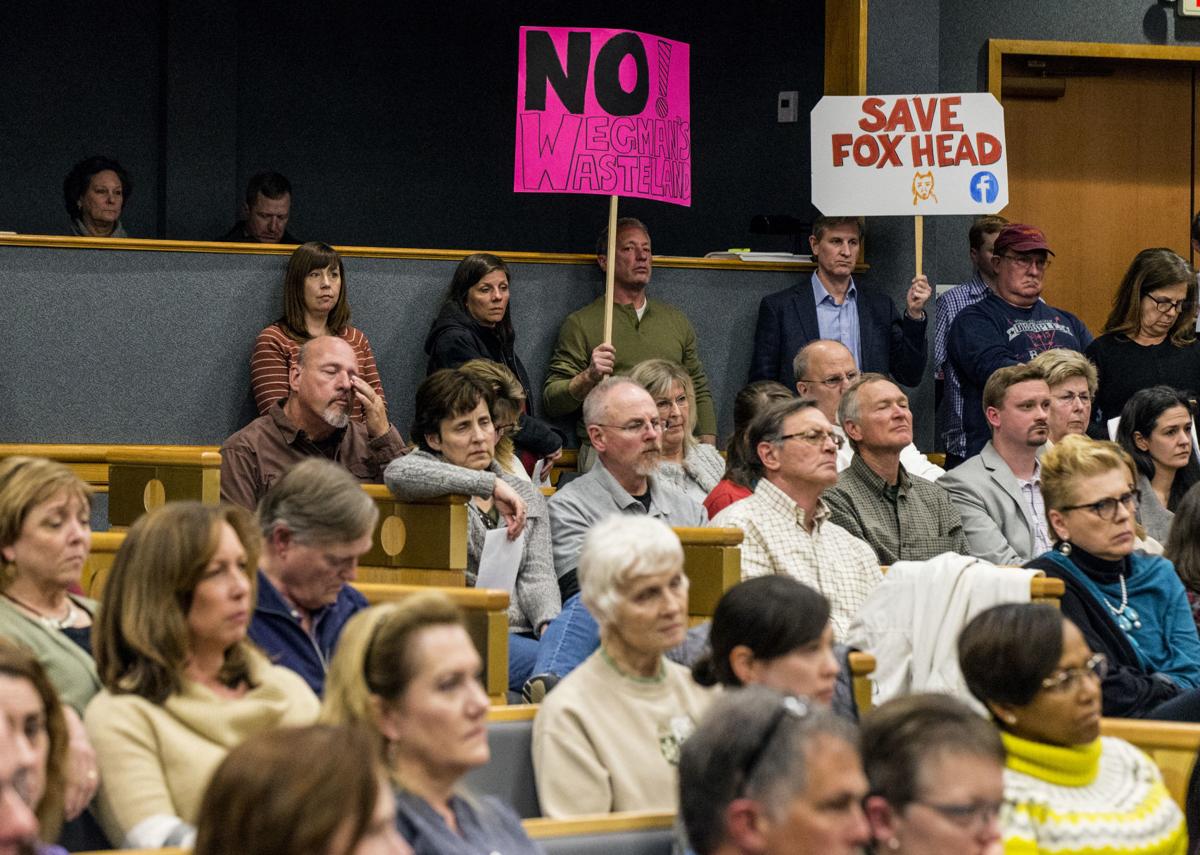 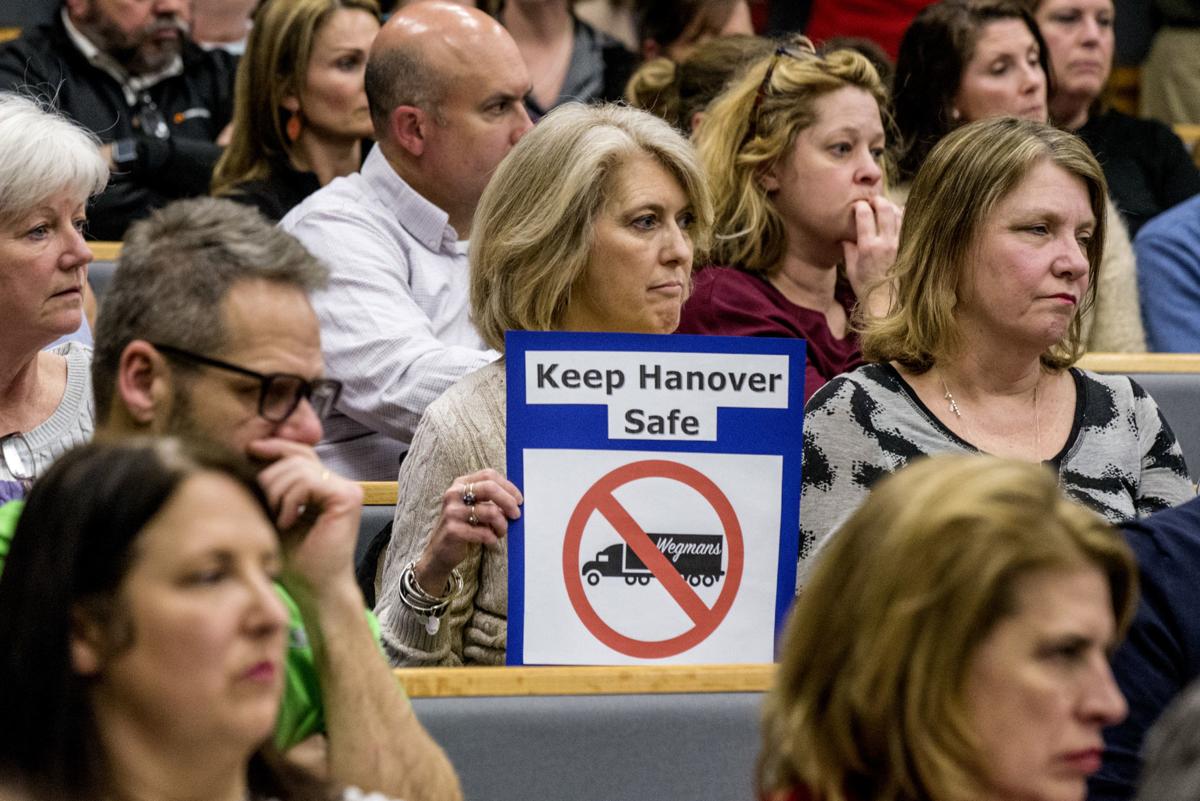 Lynn Nesaw (center) signaled her opposition to the Wegmans distribution center during a meeting in February. 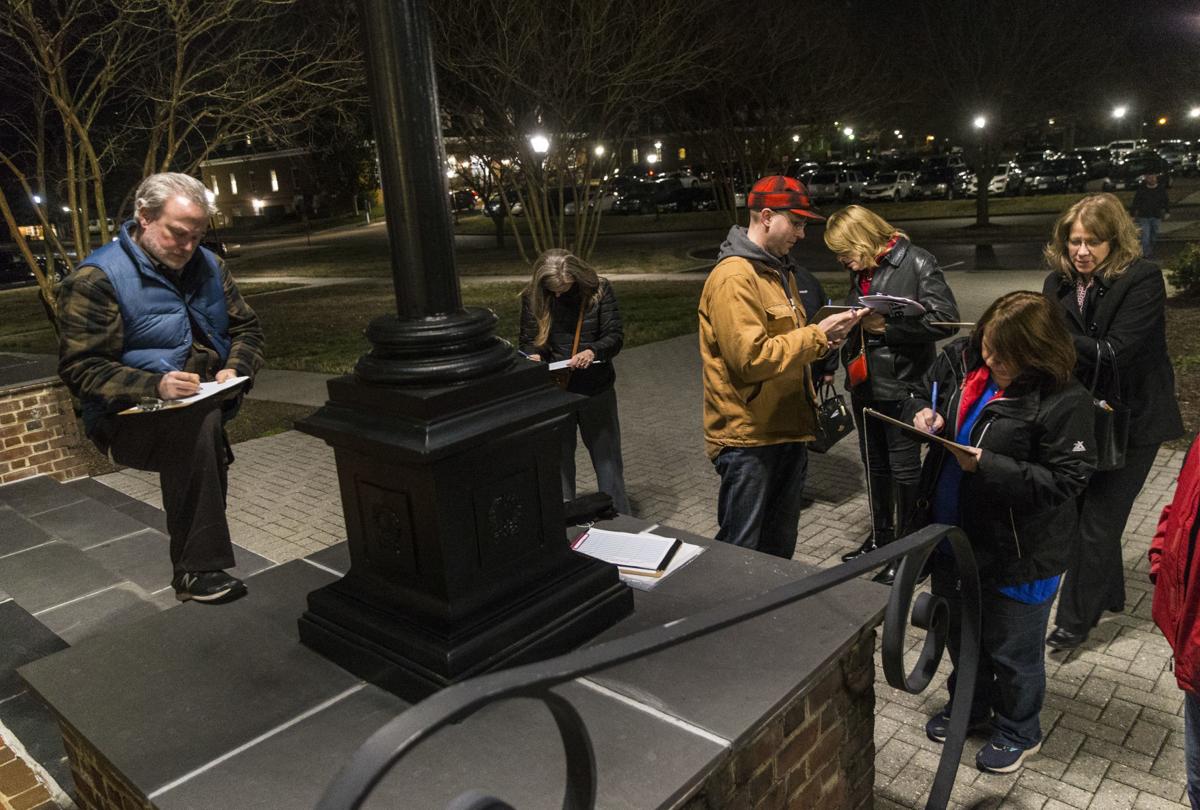 People shared contact information before the start of the Hanover County Planning Commission meeting Thursday. Some Hanover residents have begun discussing recall petitions and have called on county officials to resign. 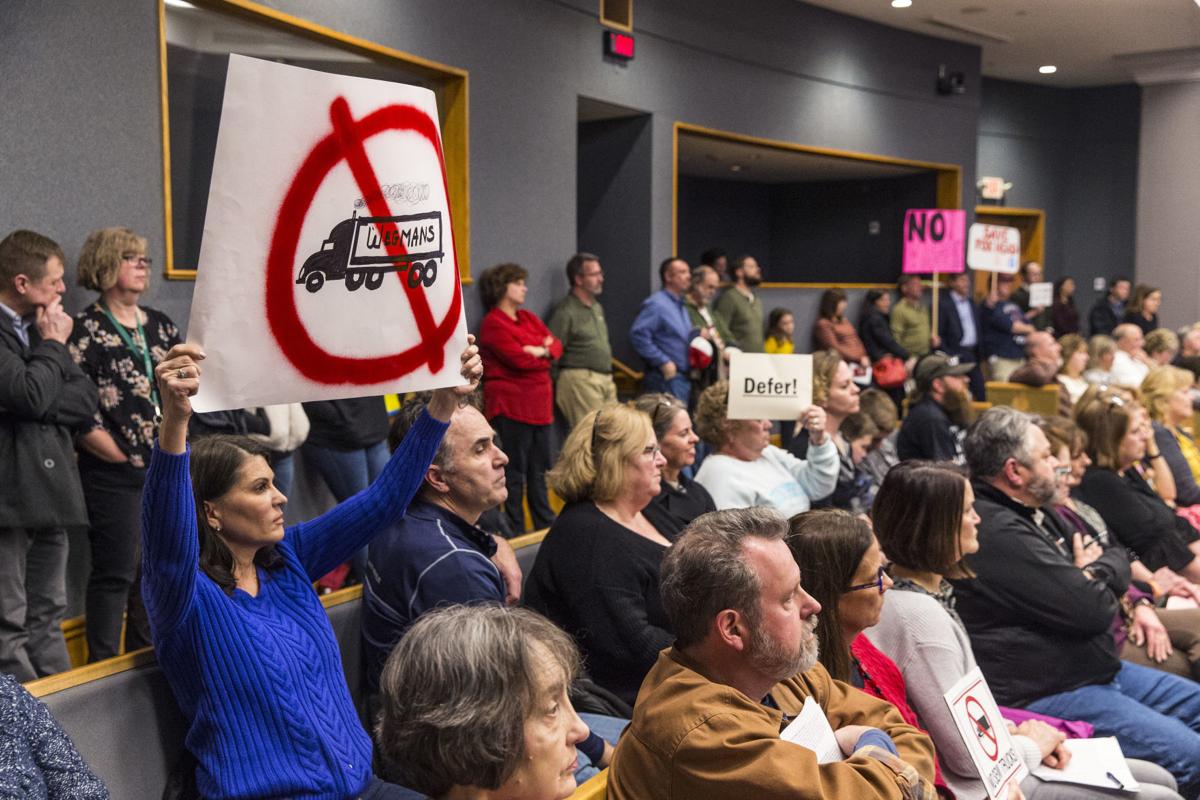 During a meeting in February of the Hanover Planning Commission, Gina Willett held a sign opposing the plan for a Wegmans distribution center.

Despite public outcry, the Hanover County Planning Commission declined to defer or deny zoning condition changes for a new Wegmans distribution center near a large concentration of single-family homes off Interstate 95.

After a nearly three-hour public hearing and discussion that went late into Thursday night, the commission voted unanimously just before 11 p.m. to move the case forward to the Board of Supervisors. The commission added a few more conditions that officials hope will alleviate some of the impacts that neighbors say will harm their quality of life.

It may do little to quell public outrage, however, as people in the audience made it clear they remain unhappy.

Immediately after the vote, amid boos and jeers from the audience, some shouted, “We won’t forget!” and “Remember to shop Henrico!”

Since the project announcement in December, residents of neighborhoods in the Sliding Hill Road corridor have said associated truck traffic will lead to more traffic congestion, increase the risk of vehicle crashes and lower home values.

Under the new conditional zoning proposed for the 220-acre site east of the Hanover Air Park, Wegmans would adhere to several architectural design features and use restrictions, as well as have buffers along Sliding Hill Road and Ashcake Road to hide the facility and dampen light and noise it would create.

The company, under the proposed proffers, would also provide up to $1 million to study and potentially install a traffic light or other traffic control measures at the intersection of Sliding Hill Road and New Ashcake Road.

On top of the proffer conditions that had already been proposed, the Planning Commission on Thursday moved to include or amend the following:

A large part of what’s driving the animosity is the perception that county officials essentially approved the development project months before it was announced on Dec. 11, moments before the Board of Supervisors voted 5-1 to approve an incentive package to draw the company to Hanover.

Faye Prichard, who cited the concerns she imagined would come from constituents in her district, was the only supervisor to vote against the project; Supervisor Angela Kelly-Wiecek was absent from the Dec. 11 meeting.

The local inducements equate to about half of the $6.7 million the state and county would give to the project if it meets certain targets and deadlines for its $175 million investment that’s expected to create 700 jobs.

While the current zoning on the property would generally allow Wegmans to develop its distribution at the site, the negotiation of new zoning conditions are intended for the county and the company to set additional protections — as well as some concessions and special privileges for the company.

Planning Commission Chairman Alan Abbott argued for some additional protections during the discussion with Wegmans officials on Thursday, but also made it clear to residents that the county is fast-tracking the project.

“If we keep it here and don’t have anything actionable to work on, then we’re just holding it for [another] 30 days for no reason at all,” he said, explaining why he would not consider a deferral. “It needs to get into the hands of the supervisors.”

Abbott did not respond to requests for an interview Friday.

In phone calls and emails to the Richmond Times-Dispatch on Friday, several residents in the area said they do not think the additional conditions are enough.

“No matter what you do, it’s going to be a nightmare,” said Daniel Baumann, a resident of Atlee Station Village. “What the county should do is start over and look at a new location. To me that’s the only sensible thing to do.”

The Hanover Board of Supervisors is expected to vote on the proffer conditions next month.

Lynn Nesaw (center) signaled her opposition to the Wegmans distribution center during a meeting in February.

People shared contact information before the start of the Hanover County Planning Commission meeting Thursday. Some Hanover residents have begun discussing recall petitions and have called on county officials to resign.

During a meeting in February of the Hanover Planning Commission, Gina Willett held a sign opposing the plan for a Wegmans distribution center.