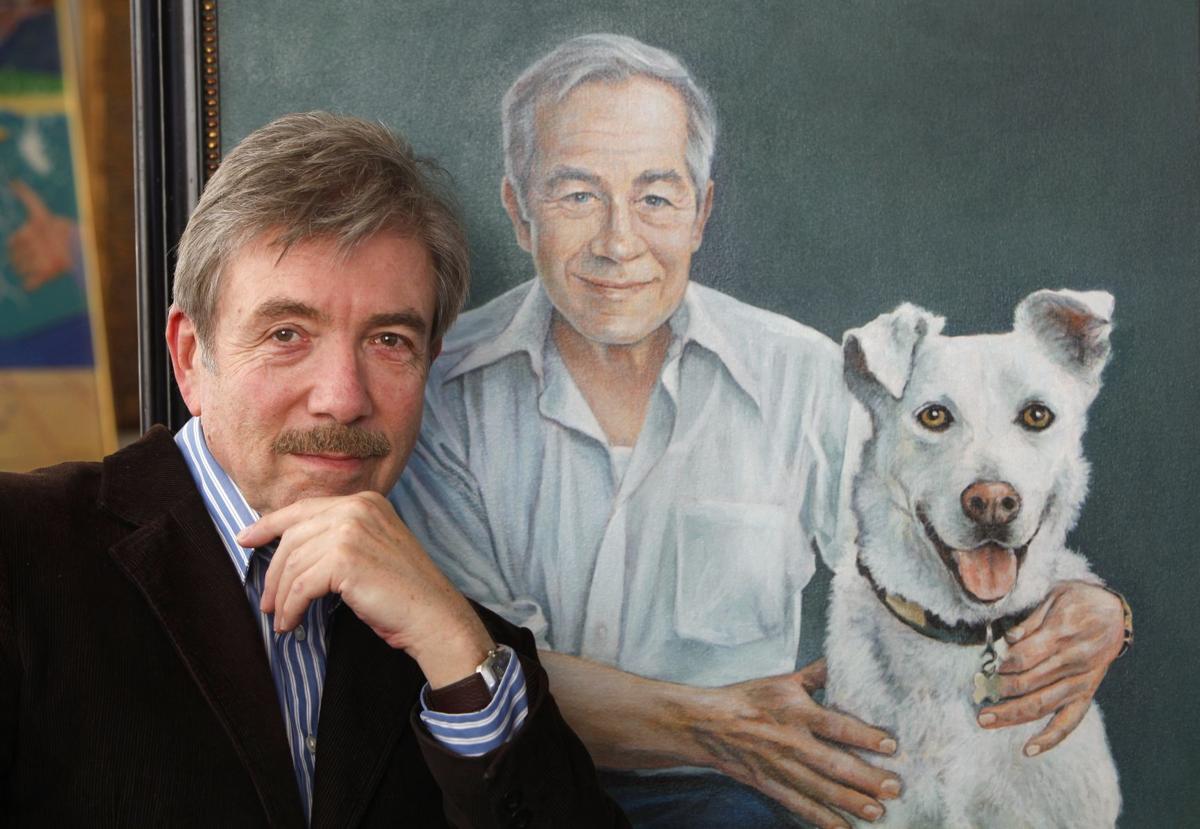 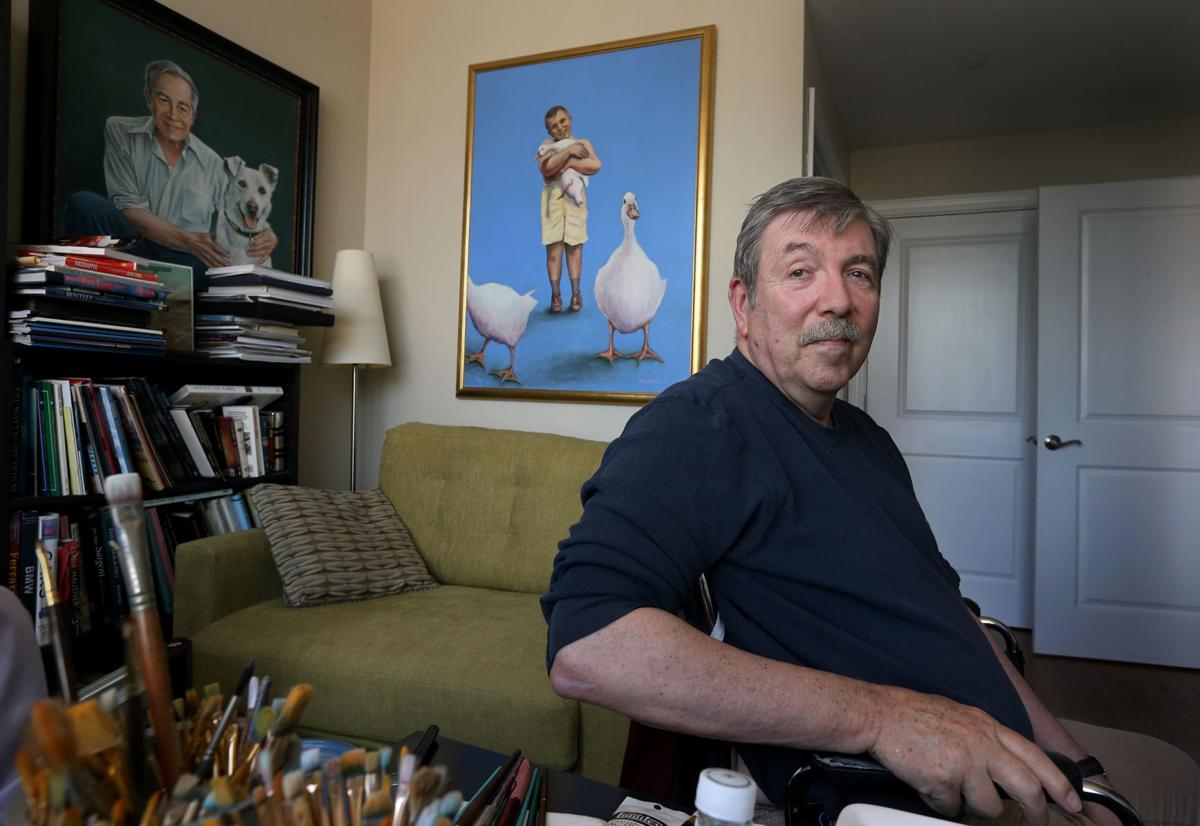 Louis Briel pauses from painting as he talks with visitors to his home in Richmond, VA Thursday, July 9, 2015. Briel, a well-known portrait artist whose paintings hang in the National Portrait Gallery, suffered a stroke several years ago and is just now begining to paint again.

Richmond portraitist Louis Briel, whose work has been displayed at the National Portrait Gallery and the U.S. Capitol — and whose portrait of Princess Diana traveled the world with Elton John — has died. He was 75.

Briel’s career was derailed by a stroke he suffered the Monday after Thanksgiving in 2012. He struggled to regain good health — and his painting touch — for the rest of his life.

His death on Jan. 20 came just five days after a new exhibition of his works opened at Crossroads Art Center on Staples Mill Road. The show, “The Many Faces of Louis Briel,” continues through March 7.

The show, which features dozens of paintings Briel had kept in storage, had been in the works for about a year, said his attorney, Stephen Burns.

“We thought we should have one more show and have something for him to look forward to,” Burns said of Briel, who spent his final years in assisted-living facilities.

The show was delayed by the pandemic, and putting it together was made more complicated, Burns said, but he was able to include Briel in the process by FaceTiming him images of the paintings he had found.

“He enjoyed that,” Burns said. “Looking at those paintings from so long ago really kind of cheered him up, just brought back so many memories.”

Bernard Louis Briel Jr. was born and raised in Richmond. He attended Douglas Freeman High School and then Hampden-Sydney College, where he graduated with honors in the classics.

He also was a teaching fellow in the classics department at Harvard University, where he earned a master’s in classical philology. He studied art at the American Academy in Rome, and in Boston under Ann Tabachnick and Morton Sacks.

He worked for a time as a fundraiser at Hampden-Sydney and also authored two novels, but painting became his all-consuming interest.

“I’m painting in my head all the time, whether it goes on canvas or not,” he said in a 2015 interview.

His paintings of prominent families and leaders hang in numerous private and public collections.

In 1995, the U.S. House added his portrait of former Rep. Thomas J. Bliley Jr. of Richmond.

In sadness following the death of Diana in 1997, Briel went to his easel and painted a portrait of the Princess of Wales. Upon hearing Elton John express his deep grief over the loss of his friend in a television interview, Briel sent the portrait to the singer-songwriter, who carried the painting with him on a world concert tour and hung it in his dressing room at each venue, according to a 2007 article in the Sunday Express, a London newspaper.

Briel’s posthumous portrait of Carol Burnett’s daughter Carrie Hamilton hangs in the Carrie Hamilton Theatre at the Pasadena Playhouse in California. For a while, Briel split his time between Los Angeles and Richmond.

After the assassination of President John F. Kennedy in 1963, Briel, then a college sophomore, went home on Christmas break and painted a portrait of the slain president that he presented to Robert F. Kennedy the following spring. In an interview for a July 2015 story, Briel recalled shaking Robert Kennedy’s hand and joked that he didn’t wash the hand for a week.

In a follow-up interview in December 2015, Briel offered closure to the JFK portrait story. He had long wondered what became of the painting. The answer came in an out-of-the-blue call from a Washington-area property manager who told Briel he had rescued the work, which had been destined for the dump after being removed from the home of a man moving into a nursing home. The painting was repaired and is now at the Esther Atkinson Museum at Hampden-Sydney College, where it will be part of an exhibit.

“It’s always good when mysteries get solved,” Briel said in 2015. “I always like to know where my paintings end up. They’re sort of like children that run away from home.”

Briel’s cousin Susan Kaspar, also an artist, said Briel was a mentor to her. When she was in college majoring in art and other relatives were questioning her choice of majors, she said Briel was always in her corner, insisting she follow her heart and do what she wanted to do.

“He would talk to me and tell me I wasn’t wasting my time. He would say, ‘Don’t listen to them. You’re going to use it throughout your life,’” recalled Kaspar, who is an interior designer who also paints. She grew up in Richmond and North Carolina and now lives in Calgary, Alberta.

Hosting the Briel exhibition has been “both a labor of love and respect,” said Jenni Kirby, owner of Crossroads Art Center.

“It is exceedingly rare that a small local gallery is asked to host an exhibit by an artist whose art is in The Smithsonian Institution’s National Portrait Gallery, the U.S. House of Representatives and has been collected by Elton John,” she wrote in an email. “We all are incredibly pleased with how the exhibition visually came together and how well it has been received by the community.”

The retrospective features 70 of his works available for viewing and purchase.

A private graveside service will be held at Westhampton Memorial Park, where Briel will be placed beside his parents.

“So I would say that to him all the time,” Kaspar said, “and that’s what they’re going to put on his tombstone: ‘Love you good, boy.’”

The Many Faces of Louis Briel

A 21-year-old man was killed in a car crash in New Kent County on Friday afternoon, according to the Virginia State Police.

When a president says it, a word is more than just a word for Richmond's Armenian community

A week ago, President Joe Biden uttered the word that no other U.S. president had been willing to say when speaking of the deportation and mas…

Louis Briel pauses from painting as he talks with visitors to his home in Richmond, VA Thursday, July 9, 2015. Briel, a well-known portrait artist whose paintings hang in the National Portrait Gallery, suffered a stroke several years ago and is just now begining to paint again.