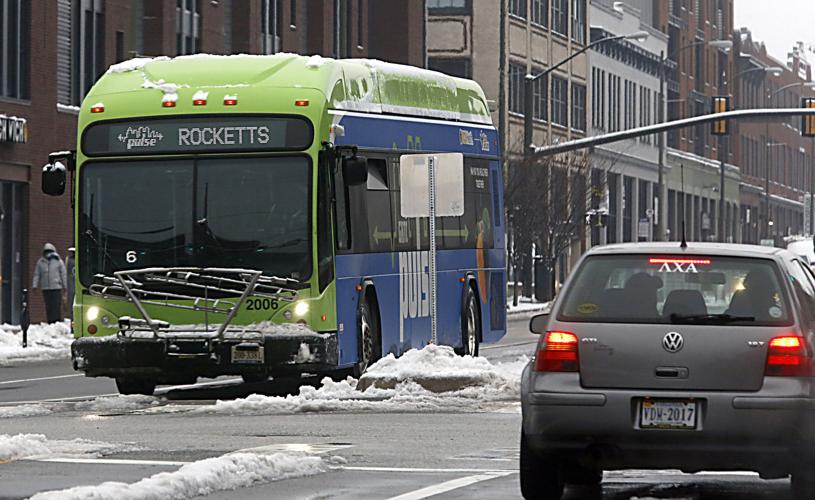 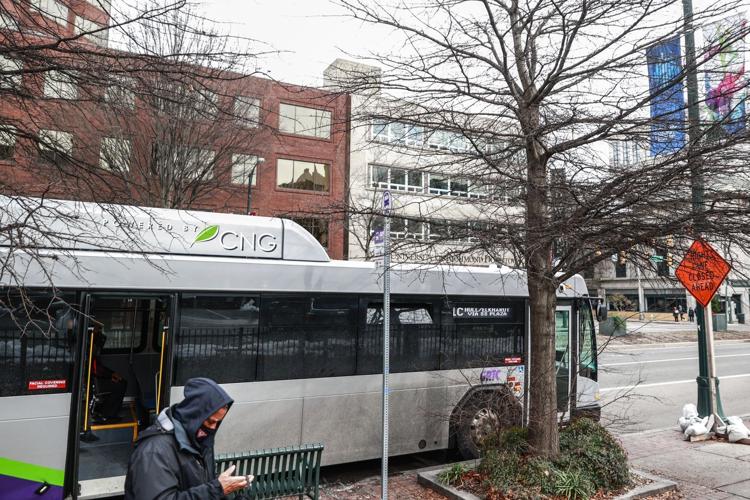 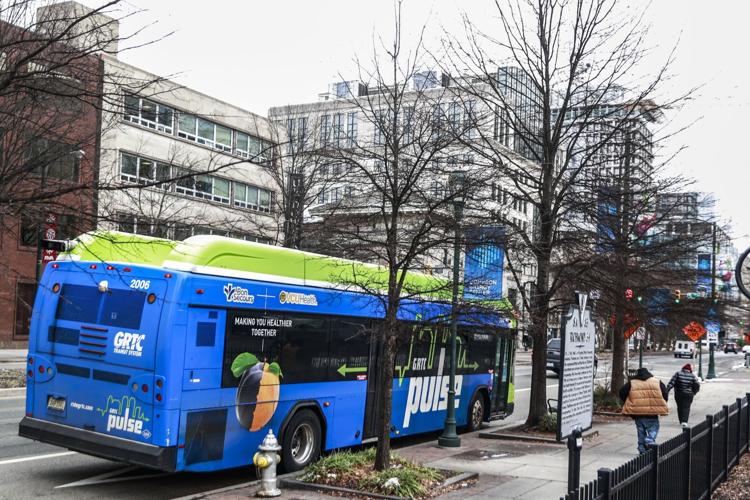 A GRTC bus makes it way through Broad Street on Wednesday, January 5, 2022 in Richmond, Virginia.

A new report from the Greater Washington Partnership, a consortium of CEOs for companies in a super-region that stretches from Richmond to Baltimore, recommends that local officials phase in a new rapid moving, north-south spine for the regional bus system.

The report recommends that officials focus on the gradual development of a new rapid bus line to serve the immediate needs of marginalized communities while at the same time focusing on growth and preventing displacement of longtime residents.

“Transit works best the more people, jobs and opportunities that are located near it,” said John Hillegass, regional mobility and infrastructure manager for the partnership. “If the jurisdictions can start planning around that now, they’ll get a better return on investment for any additional transit investments that they make.”

The report arrives as GRTC is preparing to conduct its own alignment study for a bus rapid transit expansion along a north-south corridor, four years after the opening of the Pulse, a $65 million east-west rapid bus line spanning 7.6 miles between Willow Lawn and Rocketts Landing.

The exact location of a new rapid transit line has not been decided, but the report examines the possibility of it being built along the Hull Street, Midlothian Turnpike or U.S. Route 1 corridors.

“Anytime you can provide transportation to those on a lower wage, you’re going to have a better chance of getting them gainfully employed,” said Brian Anderson, president and CEO of ChamberRVA.

“We’ve got tremendous cost pressures here, so you’re seeing more and more of our workforce living outside of Richmond,” he said. “If you can provide transportation alternatives, that can help people find housing that’s affordable and still work throughout the region. That’s why we’re supporters [of this study].”

The partnership — which include Dominion Energy, Capital One, Comcast and a bevy of other health care, higher education and financial companies — has previously advocated for transit expansion in the Richmond area, specifically highlighting “clear disparities” by race and income.

The report’s recommendations highlight challenges for public transit and real estate development in the Richmond area.

For example, there are fewer homes and jobs along the potential corridors in the counties of Chesterfield and Henrico.

Transit systems around the country usually aim to have at least 20,000 jobs and people per square mile in a light rail or bus rapid transit corridor, according to the study. In each of the four potential corridors, the density of people and jobs is less than 6,300 in the counties, so more growth is needed to reach critical mass.

Julie Timm, GRTC’s CEO and a member of the project team behind the partnership study, said parts of the city could soon be ready for a north-south expansion of bus rapid transit, but officials could face public scrutiny if it’s expanded too far.

“It’s a bit of a chicken-or-egg situation,” Timm said. “We know that when you put in fixed assets in transit compatible corridors, you can induce more development. ... But it’s hard to do it before the growth because then you might not have the ridership and then you get criticism about putting it where it’s not needed.”

At the same time, there’s concentrated poverty along sections of each corridor, which is an indicator that people need public transit. The report says there’s a yawning demand for better service, especially for the 25,000 households in Richmond, Chesterfield and Henrico that live without a vehicle.

“The likelihood that you have a car is related to the money in your bank account, which is often related to the color of your skin,” says a project team letter in the report. “Without a car, this region is extremely challenging to navigate, especially to employment centers in Henrico and Chesterfield counties.

“Regional mobility should not be reserved only for those who can drive,” the letter reads. “By not investing in an expanded transit network, we leave too many of our fellow neighbors behind. Working together, we can build a connected region that serves us all.”

Along a southern section of U.S. Route 1 examined in the study, the annual median income for households within half a mile of the corridor from Broad Street to Brightpoint Community College is $37,000. That’s the lowest of the four corridors, with the largest being $51,000 for the Midlothian Turnpike stretch that ends just west of Chesterfield Towne Center.

Improved public transit service could prove to be a double-edged sword, however, as new development can lead to higher rents and land values that jack up housing costs.

Laura Lafayette, CEO of the Richmond Association of Realtors and another member of the study’s project team, said she and other officials are keenly aware that gentrification could harm the people they are trying to help.

Among the report’s recommendations are setting goals for housing affordability and providing assistance to low-income residents and small businesses.

Possible solutions cited in the report include the expansion of rental and property tax relief for low-income and senior residents; utilizing public subsidies and the Maggie Walker Community Land Trust to create affordable housing; and incentivizing development at various price points.

“We have to have tools in place that allow for a mixed-income community so that long-term residents are able to stay,” said Lafayette, who is also a member of the land trust’s board of directors. “At the end of the day, this is just a report. Elected and appointed officials and policymakers in our region are the ones who will make these decisions.”

The report also recommends that officials consider continuing GRTC’s zero-fare policy beyond June 30, 2025. GRTC originally suspended fares at the start of the pandemic as a health safety measure, but some local and state officials have supported keeping it as a socioeconomic policy.

Half of GRTC’s passengers make less than $25,000, according to the transit company. The report says officials in the region should continue looking to the model or other equitable fare strategies that support “regional goals around social inclusion and mobility.”

A new north-south rapid bus line is estimated to cost approximately $100 million and is still five to 15 years away, according to the report. Transit officials say there are ample opportunities to acquire state and federal funding for the project, but that funding will also depend on local jurisdictions working with GRTC to apply for grants and allocate more local tax dollars to transit.

Timm said her main priorities at the moment are making sure there are enough sidewalks and bus shelters on routes that already serve part of the potential expansion corridors.

Beyond that, more drivers and vehicles are needed to expand service, so the transit company must also resolve an ongoing labor shortage that recently resulted in service cutbacks, she said.

“We still have a lot of hurdles with [the COVID-19 pandemic] to get through, but as far as investment in our workforce, we are turning a corner,” she said.

Two people were killed - including a senior student-athlete at Henrico High School and a 24-year-old man - in separate shootings in Henrico County on Thursday.

After facing scrutiny for the foundation's stewardship of the Evergreen and East End cemeteries over the past five years, John Sydnor is no longer the organization's executive director.

A GRTC bus makes it way through Broad Street on Wednesday, January 5, 2022 in Richmond, Virginia.