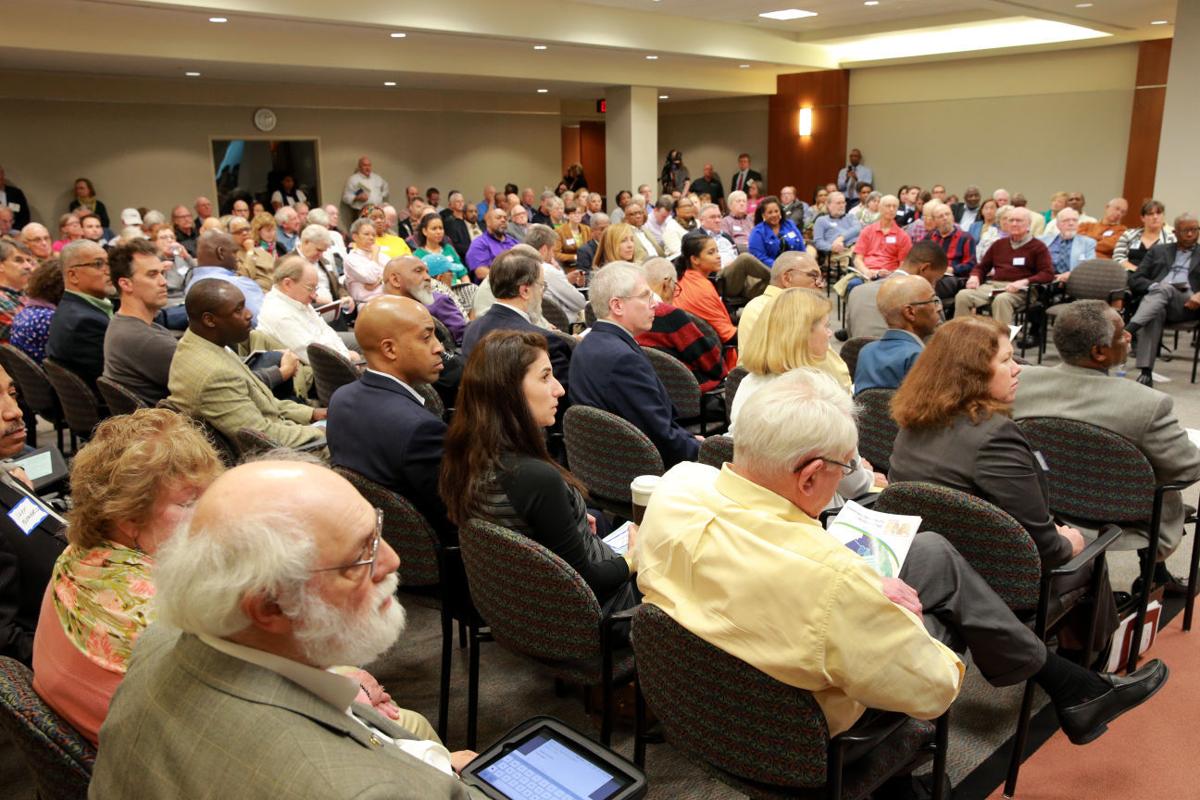 Public Square 56, 'Why is Richmond still segregated?' is full of participants at Richmond Times-Dispatch in Richmond on Thursday, April 23, 2015.

Public Square 56, 'Why is Richmond still segregated?' is full of participants at Richmond Times-Dispatch in Richmond on Thursday, April 23, 2015. John Moeser, standing at left, a senior fellow at the Bonner Center for Civic Engagement at the University of Richmond and a professor emeritus of urban studies and planning at VCU, speaks during the Public Square. 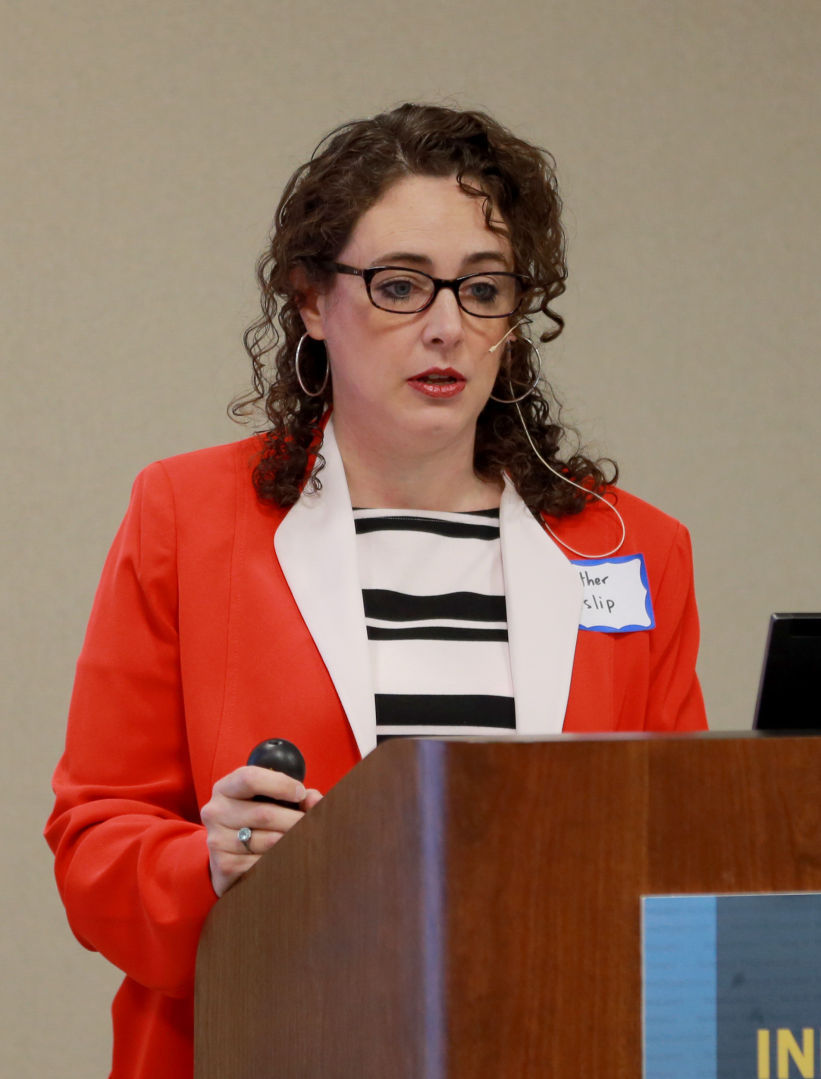 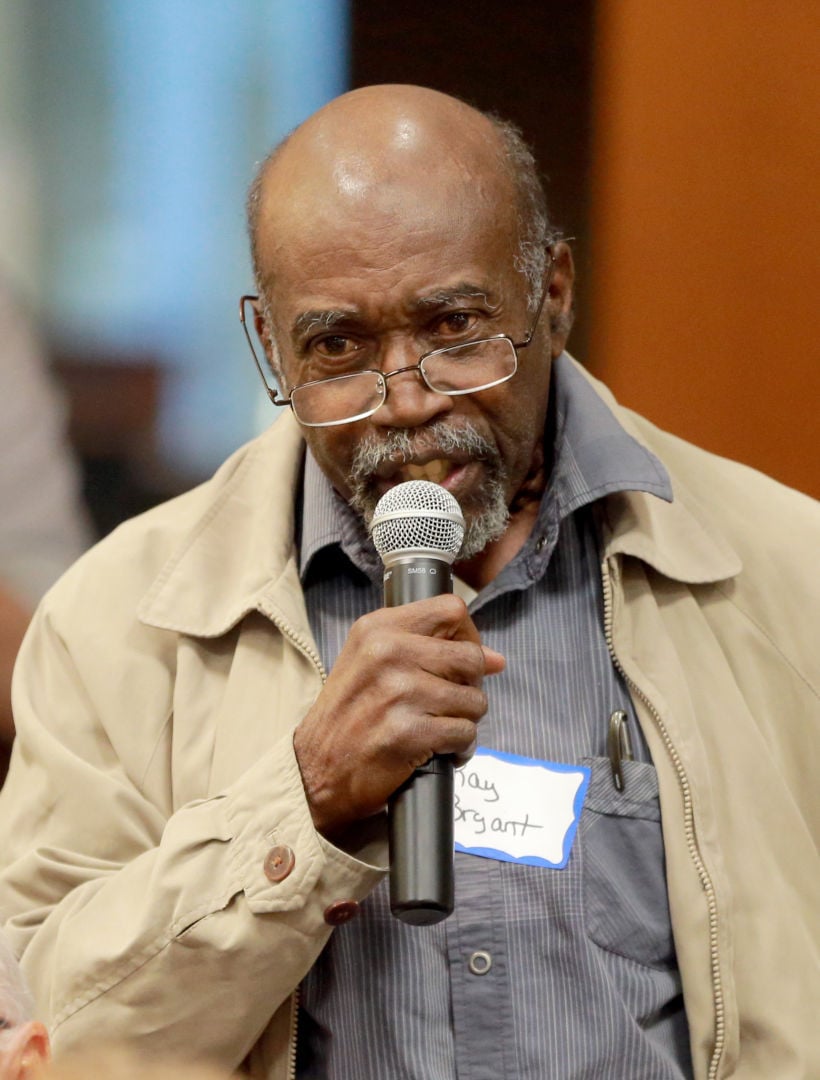 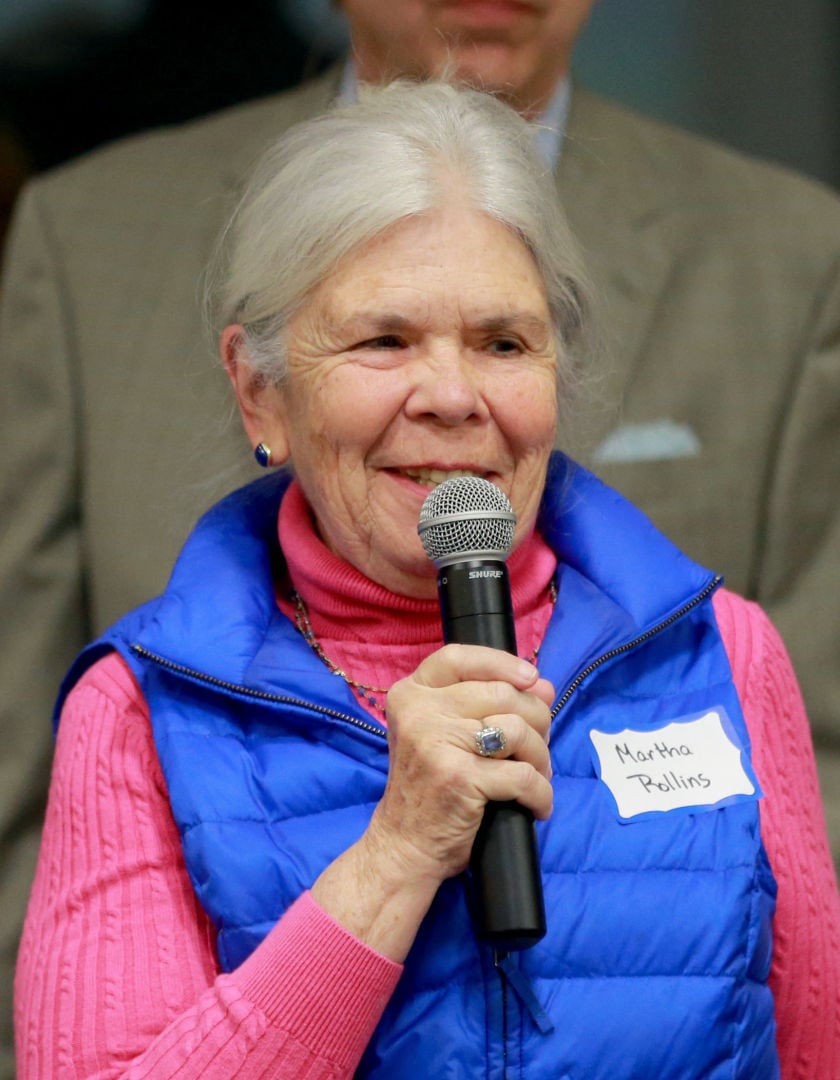 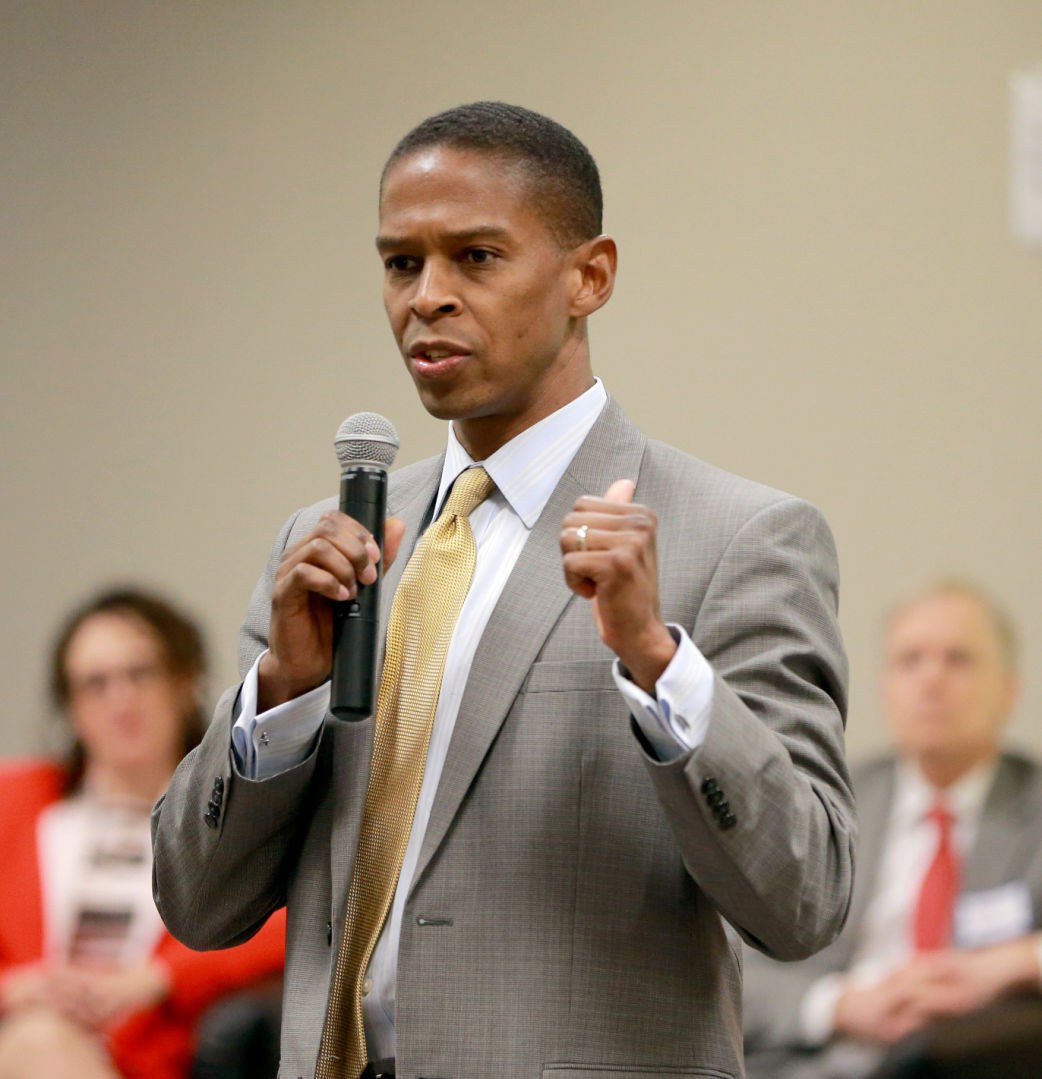 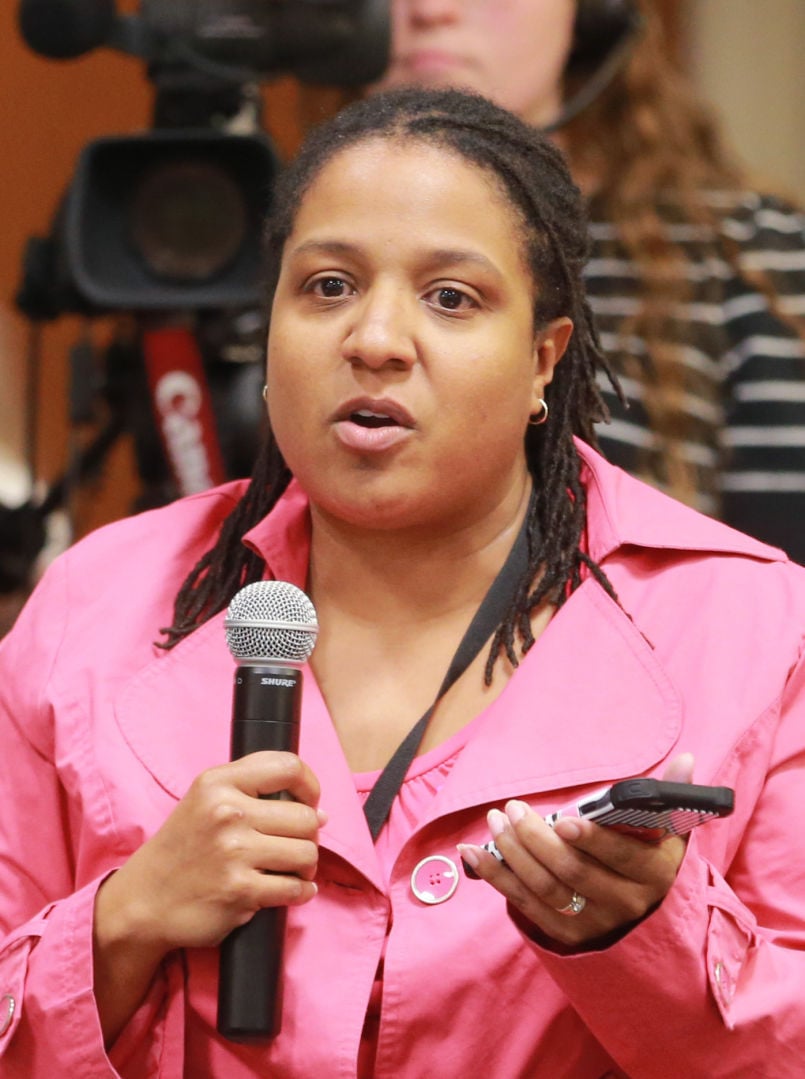 Nichelle Carver asked a question during the Public Square 56: Why is Richmond still segregated? at Richmond Times-Dispatch in Richmond on Thursday, April 23, 2015.

Nearly 200 people attended a midday Public Square forum Thursday to discuss why Richmond is more segregated today than ever before and how to change the troubling divide.

The racial and economic isolation of the region’s communities didn’t happen by accident.

John Moeser, a professor at the University of Richmond, and Housing Opportunities Made Equal CEO Heather Mullins Crislip explained to the crowd how laws and the practices of lenders during the Jim Crow era worked to keep neighborhoods segregated.

In the 1920s, after the practice of overtly using race to segregate neighborhoods was declared unconstitutional, the city’s zoning code barred people from living in areas where they couldn’t marry their neighbors. It achieved the same purpose, since interracial marriage still was illegal.

Crislip said that even today, two systems exist based on race. She noted how the sub-prime mortgages that contributed heavily to the recent housing market crash went disproportionately to black homeowners here.

“The opportunities that they’ve created for citizens are vastly different, and the lingering costs are huge,” she said.

Michael Herring, the Richmond commonwealth’s attorney who attended the town hall-style meeting at the Richmond Times-Dispatch, said felony rates are very high in the poorest pockets of the city that are most segregated.

Herring said he believes the city would be better off if it charged people with felonies as a last resort because of the lifelong costs the tag carries both for individuals and society. But, he said, he hasn’t yet figured out how to do it under the current system.

Victor K. Branch, Richmond market president for Bank of America and a discussion panelist, said it’s important to acknowledge the city’s ugly history while working toward a solution that would benefit everyone.

“The inspiring thing about realizing that our segregated patterns are the result of policy decisions is that we have the opportunity to change them,” Branch said.

“Chief (among the changes) is affordable housing in more high-opportunity neighborhoods. And in my industry, providing credit and home-ownership opportunities for everyone in the community. Fair housing has the power to transform communities.”

Ted Groves with Voices for Virginia’s Children said during the question-and-answer session that his group is working on a report that will show how segregation is negatively affecting the state’s schools.

The idea of creating equal opportunities for everyone was a running theme through the meeting.

Martha Rollins, who founded the nonprofit group Boaz and Ruth to revitalize the city’s Highland Park neighborhood, said financial reparations for blacks seem like a way to make amends for the intentionally racist policies that put them at a clear economic disadvantage.

Herring, the Richmond prosecutor, said that while cutting checks to individuals never would gain public traction, investing public money in historically under-served communities could be a catalyst for change.

Lillie Estes, a community activist in Richmond, said it is important to acknowledge the historical mistreatment of Richmond’s black community.

“We have to tell ourselves the truth about what was done. This is intentional institutional neglect,” Estes said. “We could have all concentrated black communities. I ain’t trying to move in your community at all. But I want equal cultural opportunities in my community.”

Nichele Carver said she’d heard that her almost entirely black neighborhood in Henrico County likely had lower property values simply because of the racial makeup. Crislip confirmed that such stories are a continuing part of the area’s legacy.

Ray Bryant, who was raised in public housing, said gentrification in the city has pushed minorities to the suburbs ringing the city until it looked like “a Hostess cupcake — chocolate on the outside and white in the middle.”

In response to a question about what particular policy changes they’d endorse to start improving conditions around Richmond, Crislip said she’d support higher tax breaks for developers who build affordable housing in areas with more opportunities instead of clustered in the city center and suburbs.

Moeser endorsed a plan already in place in Cleveland that would create small businesses in low-income segregated areas and use the buying power of institutions such as local colleges and hospitals to buy supplies from them. The workers would own the business and, in theory, the money would circulate throughout the neighborhood and spur more investment.

Michael Paul Williams, a Times-Dispatch columnist and a panelist at the forum, said he’d get rid of Virginia’s rule that makes cities independent from counties.

“You have localities that function like Balkanized states,” he said. “Richmond should be part of Chesterfield and Henrico.”

The meeting was the 56th Public Square hosted by The Times-Dispatch.

“Based on today’s Public Square, it’s an understatement to say the Richmond region is hungry for solutions — and ready to work on them together,” said Times-Dispatch President and Publisher Thomas A. Silvestri, who moderated the discussion.

Williams: On segregation, energy must be transformed into action

The April 23 Public Square drew a full house. Participants discussed a difficult subject. Indeed they addressed an issue many would prefer not…

Public Square 56, 'Why is Richmond still segregated?' is full of participants at Richmond Times-Dispatch in Richmond on Thursday, April 23, 2015.

Public Square 56, 'Why is Richmond still segregated?' is full of participants at Richmond Times-Dispatch in Richmond on Thursday, April 23, 2015. John Moeser, standing at left, a senior fellow at the Bonner Center for Civic Engagement at the University of Richmond and a professor emeritus of urban studies and planning at VCU, speaks during the Public Square.

Nichelle Carver asked a question during the Public Square 56: Why is Richmond still segregated? at Richmond Times-Dispatch in Richmond on Thursday, April 23, 2015.