Rehearing sought from Virginia Supreme Court in Lee monument removal case; Gov.'s office: 'This is truly a lost cause'
0 Comments
Share this
1 of 3 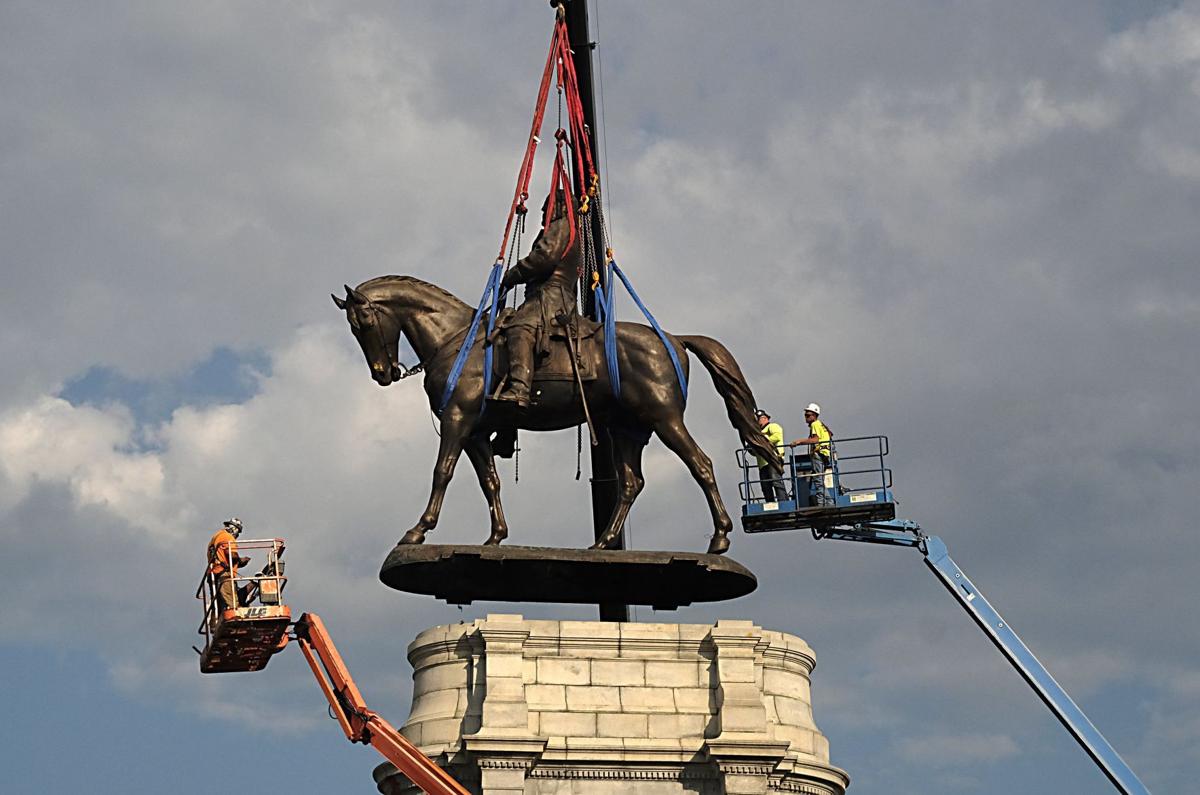 After a unanimous decision from the Virginia Supreme Court, the Robert E. Lee statue was removed on Sept. 8. 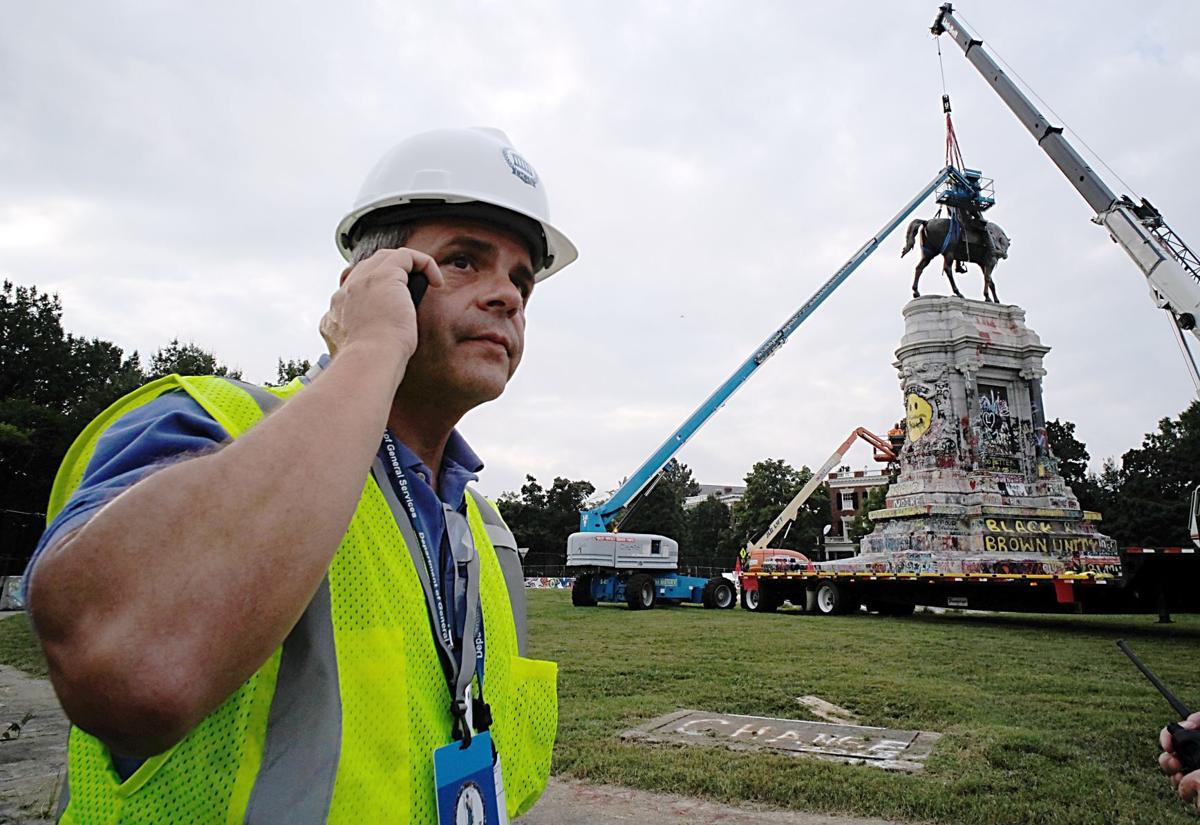 Joe Damico, director of the Virginia Department of General Services, talks on the phone during removal of the Robert E. Lee statue on Monument Ave. in Richmond, VA Wednesday, Sept. 8, 2021. 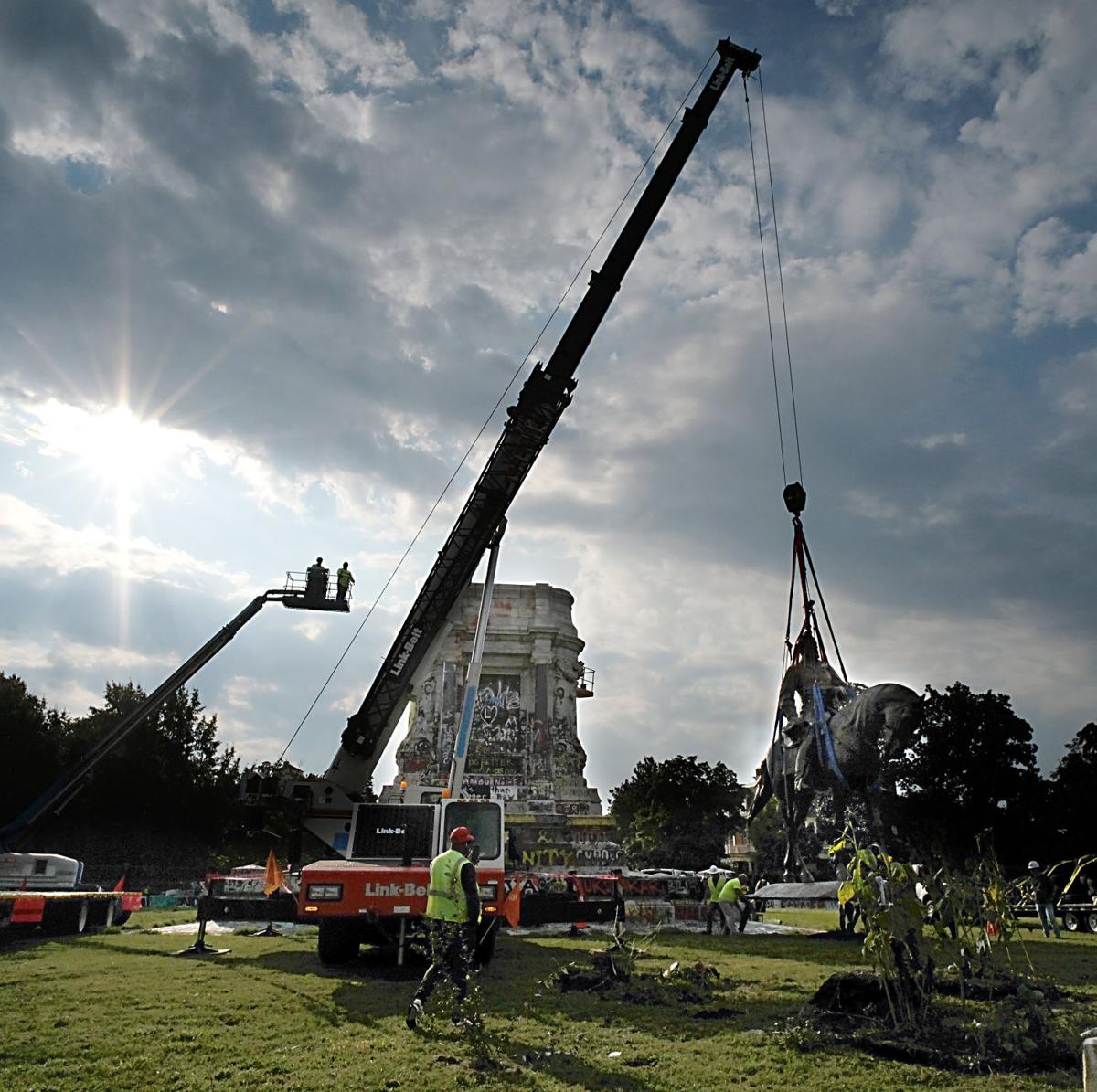 Workers removed the statue of Robert E. Lee from Monument Avenue on Sept. 8. A court petition seeks to appeal the decision that allowed its removal.

The plaintiffs who fought for more than a year to keep the Robert E. Lee statue on Monument Avenue are asking the Virginia Supreme Court to reconsider its unanimous decision earlier this month that permitted its removal.

With the dust barely settled since Sept. 8 when the 12-ton bronze statue of the Confederate general on his horse was lifted from its pedestal and removed to an undisclosed site, four property owners Wednesday filed a request with the high court for a rehearing alleging the justices made “several fundamental errors” in their Sept. 2 decision.

“If those errors are allowed to stand uncorrected, the damage to the rule of law, the authority of the General Assembly, and the credibility of the Court will be profound and lasting,” they contend in an 11-page petition.

Patrick M. McSweeney, one of the lawyers filing the petition, said restoring the monument would be the ideal outcome for his clients. “But as an alternative, they certainly don’t think the state owns and controls the monument,” he said Wednesday.

Among other things, the petition complains that the justices ignored the contention that the state cannot continue to benefit from an agreement it has repudiated. In this case, the state wants to keep ownership of the monument and land while disavowing the promises it made to obtain them. “Such a result allows the Commonwealth to take property without compensation,” argues the petition.

After it was lifted off the pedestal, the statue was cut into two pieces, an action McSweeney said Wednesday was punitive. “There was no need to cut it up,” he said.

The petition also asserts that the high court failed to address claims the state could transfer the monument and Lee Circle to a private party if, after 130 years, the state decides it does not want to be associated with any message the monument conveys.

Alena Yarmosky, a spokesperson for Gov. Ralph Northam, said, “This is truly a lost cause. Every branch of government has spoken — including a unanimous ruling from the Supreme Court — in support of a more inclusive, just Virginia. It’s time to move on.”

Charlotte Gomer, a spokesperson for Virginia Attorney General Mark Herring, wrote in an email that, “We just received the request for rehearing and are currently looking over the filing, but I’m not exactly sure what the plaintiffs hope to achieve with this move.”

“It is time for the Commonwealth to move away from a past when leaders of a racist insurrection were glorified to a future that tells our whole history fully and truthfully,” said Gomer.

Under state law it would take just one of the justices who ruled against the petitioners to grant a rehearing. L. Steven Emmert, a Virginia Beach lawyer who writes the “Virginia Appellate News & Analysis” website, said rehearings are seldom granted. “Probably one grant in almost 100 filed in the past five or so years,” he said.

Emmert had not seen the filing Wednesday, but said, “because the statue has already been removed, this petition is an even greater long shot than normal.”

McSweeney, however, said, “the injunction remains in play in the circuit court where it was entered until ... the final disposition of the appeal, which by rule does not occur until the rehearing petition is disposed of.”

“In our view, the governor was in contempt of the circuit court by removing the statue when he did. The opinion of the Supreme Court cannot terminate the circuit court injunction until the procedure prescribed by its rules has been concluded,” added McSweeney.

Northam ordered the statue removed last year during protests in Richmond following the death of George Floyd. The monument was located at Lee Circle on land given to the state by 1887 and 1890 deeds.

Five area residents filed suit in Richmond Circuit Court to block the removal, arguing that the deeds require that the monument be held “perpetually sacred” by the state. A Richmond circuit judge ruled against them, holding that arguments to keep the statue in place were contrary to current public policy as established by the General Assembly last year.

An injunction was put in place barring the monument’s removal pending the appeal to the Virginia Supreme Court.

On Sept. 2, the justices sided with the judge, ruled against the plaintiffs and dissolved the injunction. In a separate case, the court also ruled against an heir of those who donated the property.

The justices wrote: “Those restrictive covenants are unenforceable as contrary to public policy and for being unreasonable because their effect is to compel government speech, by forcing the Commonwealth to express, in perpetuity, a message with which it now disagrees.”

The petition for a rehearing argues among other things that the 1889 joint resolution passed by the General Assembly accepting the Lee monument, its pedestal and Lee Circle upon “‘the guarantee of the state that it would hold said statue and pedestal and ground perpetually sacred to the monumental purpose to which they have been devoted’” set state policy.

That policy cannot be repealed unless a new law is enacted explicitly or by necessary implication does so, the property owners contend.

In holding that public policy had changed since 1889, the justices cited major U.S. Supreme Court cases of Brown v. Board of Education, on segregated public schools, and Loving v. Virginia, on interracial marriage, as well as the 1970 revision of Virginia’s 1902 Constitution, which reflected the 1890s public policy.

The rehearing petition noted that the justices considered actions such as the elimination of the state holiday honoring Lee, the removal of Confederate monuments on city property in Richmond and the General Assembly’s decision to remove other Confederate monuments when deciding that public policy had changed.

However, the petition argues, the justices failed to acknowledge: that the state issues license plates honoring Lee; that in 1970 the state obtained the designation of the Monument Avenue Historic District and that in 1997 the district was designated a National Historic Landmark; and that in 2006 the Lee monument was included in the National Register of Historic Places.

The justices also ignored that the 1970 revision of the state Constitution established public policy that the state preserve and protect historic sites.

The petition for a rehearing asserts that the state Supreme Court’s opinion, “creates an entirely novel legal doctrine — that the government cannot make binding agreements that require it to continue or take any actions that can be construed as engaging in government speech.”

“Will this doctrine allow a governor to cancel construction contracts for facilities that he concludes convey a message contrary to the Commonwealth’s public policy? Would it preclude the Museum of Fine Arts from agreeing to conditions on a donation of a work of art?” asks the petition.

100 photos of the Robert E. Lee statue coming down in Richmond

WATCH NOW: Videos from the Lee statue removal in Richmond

Five videos from the scene as the Robert E. Lee statue was taken down in Richmond on Wednesday.

After a unanimous decision from the Virginia Supreme Court, the Robert E. Lee statue was removed on Sept. 8.

Joe Damico, director of the Virginia Department of General Services, talks on the phone during removal of the Robert E. Lee statue on Monument Ave. in Richmond, VA Wednesday, Sept. 8, 2021.

Workers removed the statue of Robert E. Lee from Monument Avenue on Sept. 8. A court petition seeks to appeal the decision that allowed its removal.