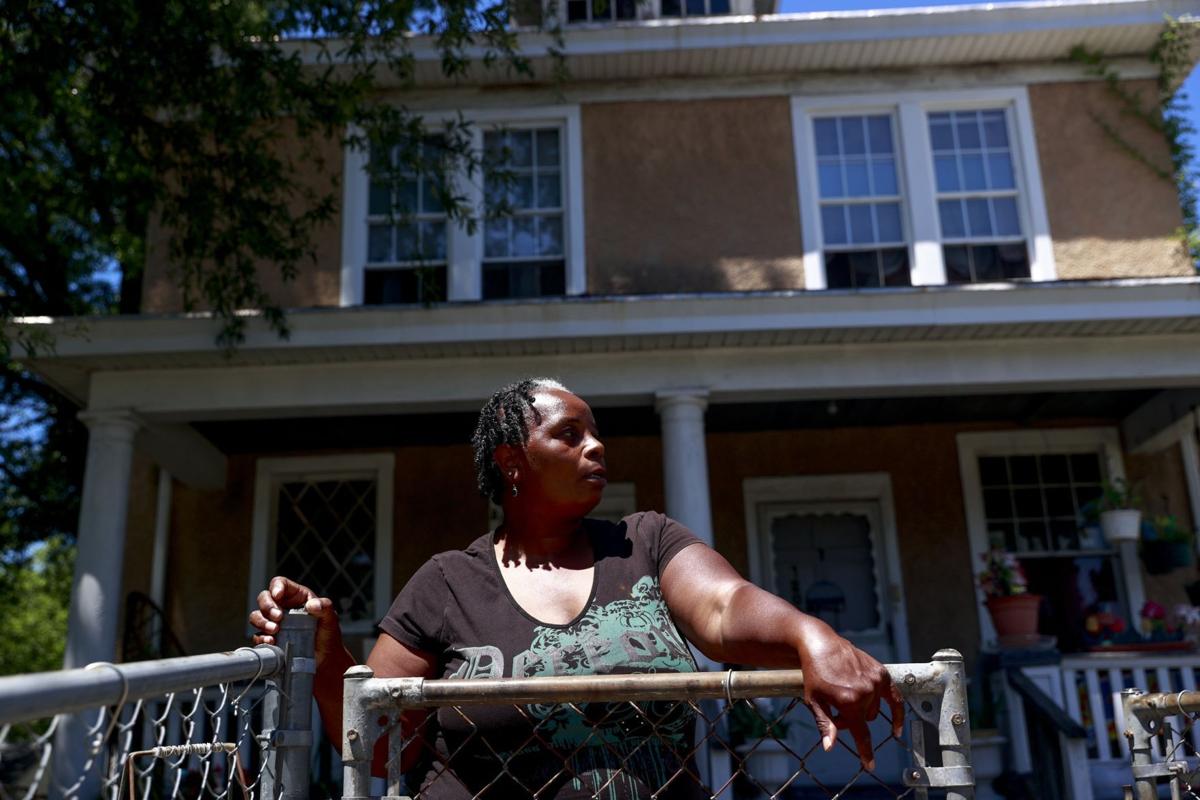 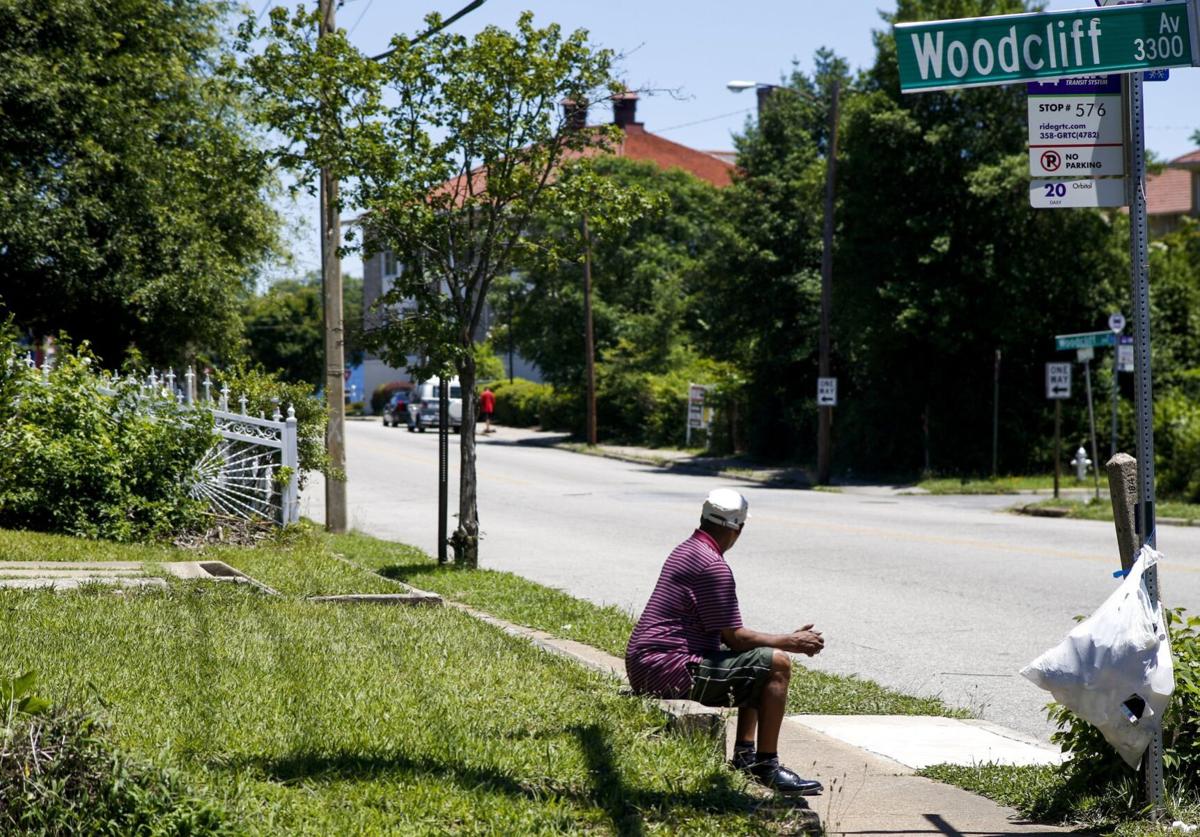 A man waits for a bus at the highland park stop on Thursday, June 17, 2021 in Richmond, Virginia. 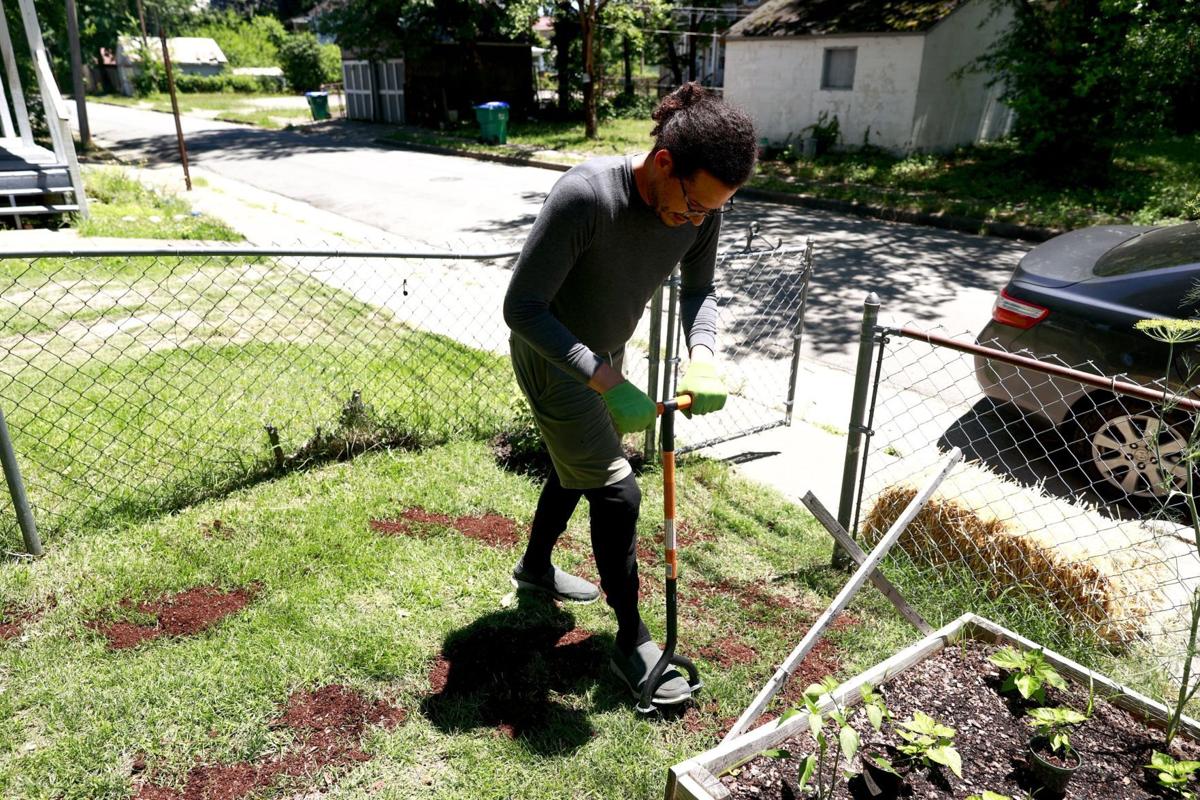 Nicholas Rodriguez work on his lawn on Thursday, June 17, 2021 in Richmond, Virginia. 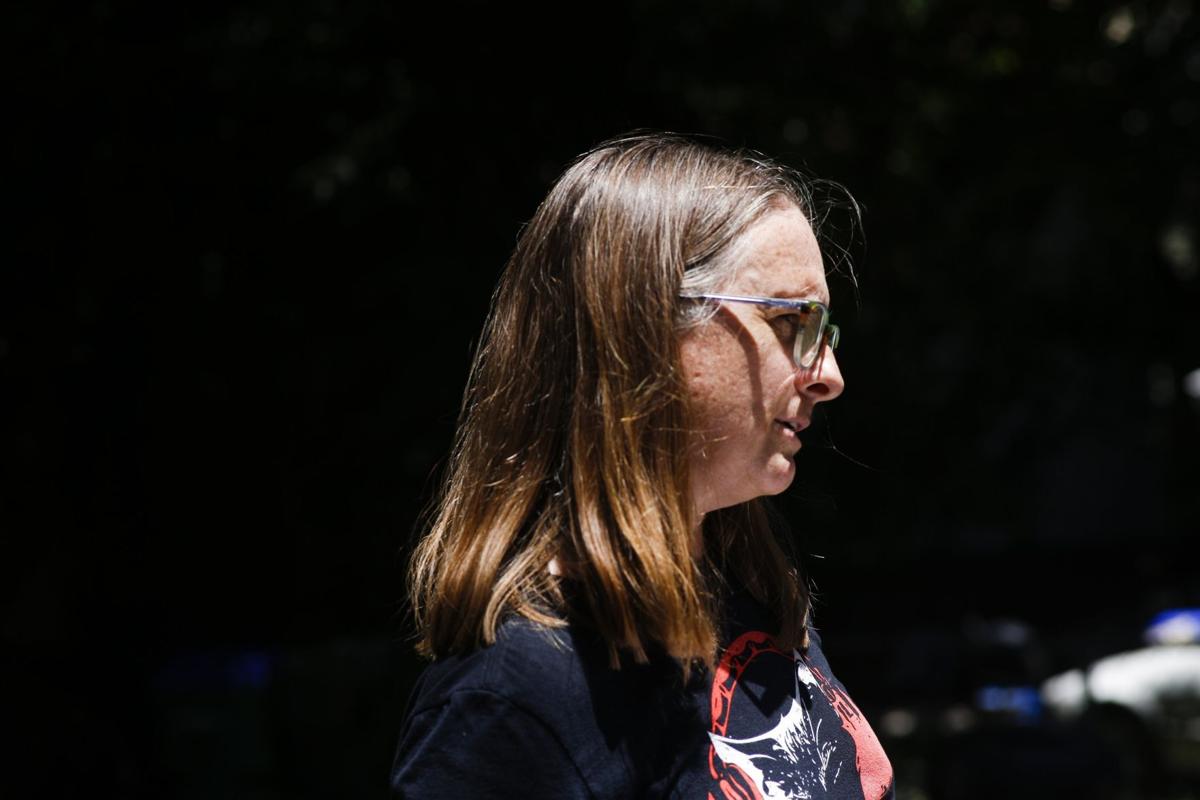 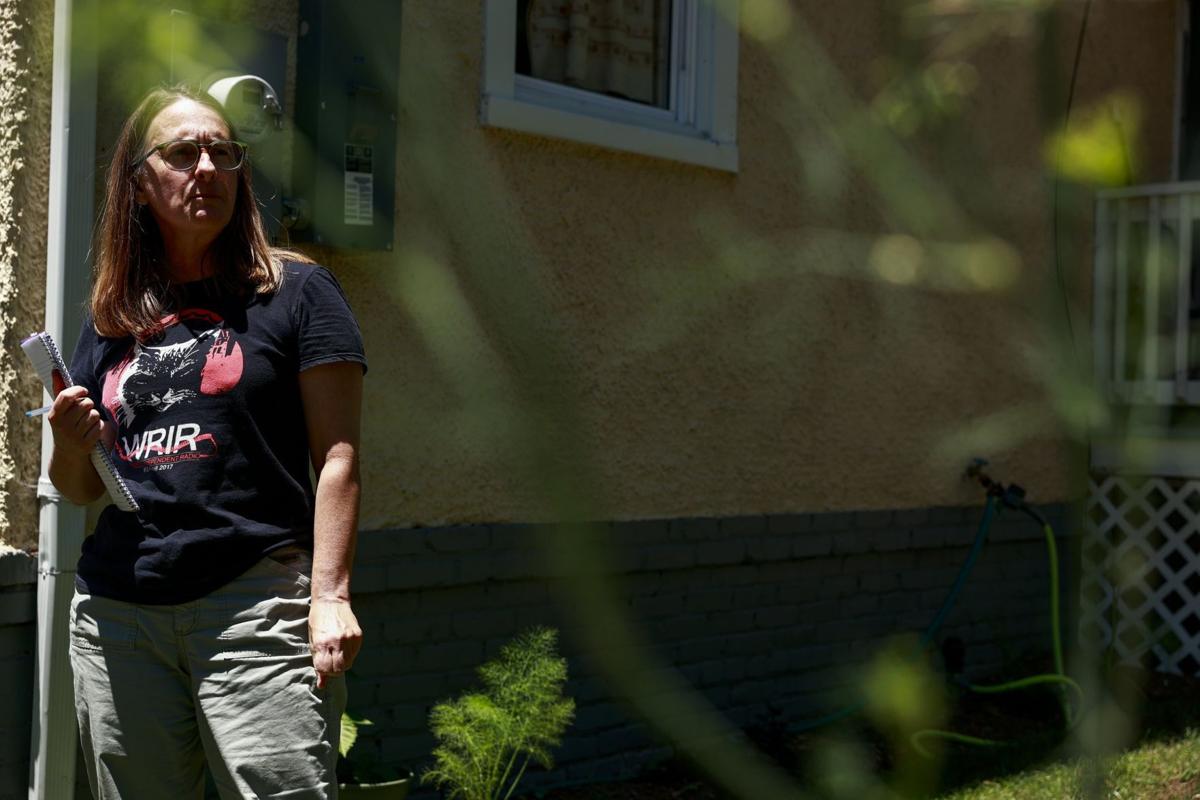 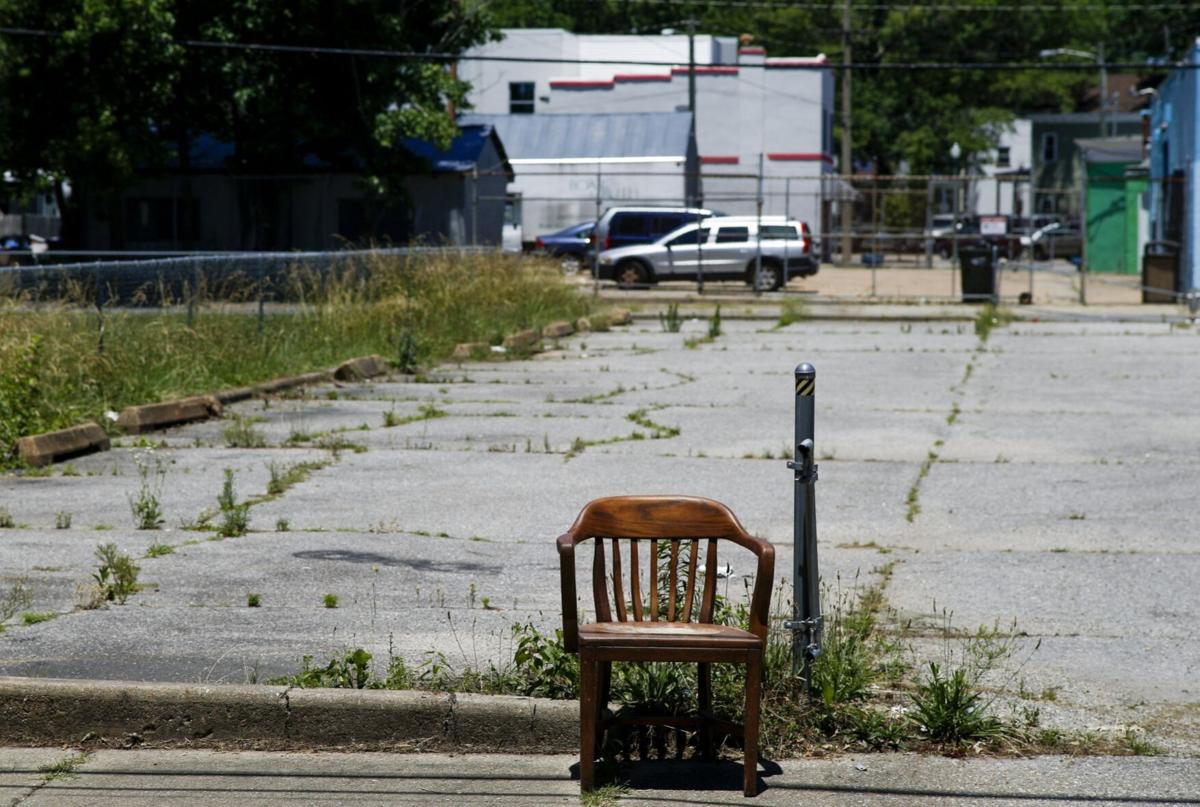 a chair is seen on a vacant lot in Highland park on Thursday, June 17, 2021 in Richmond, Virginia. 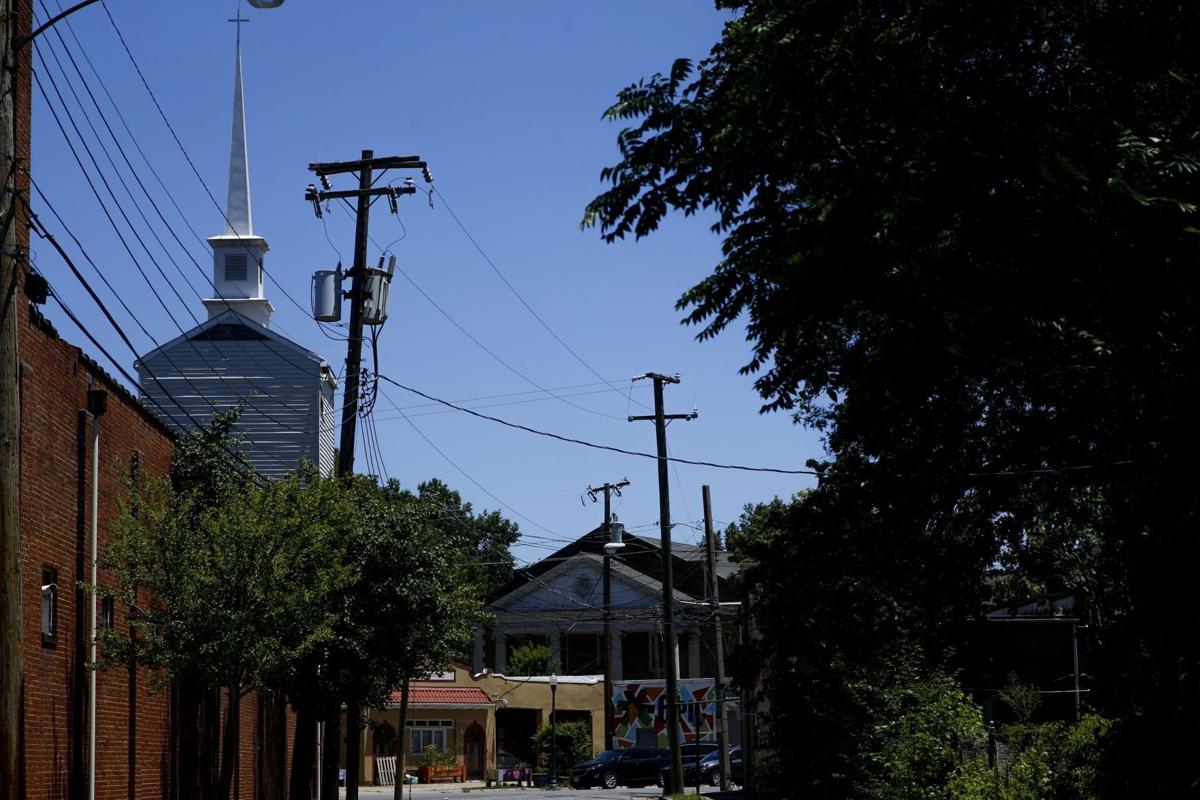 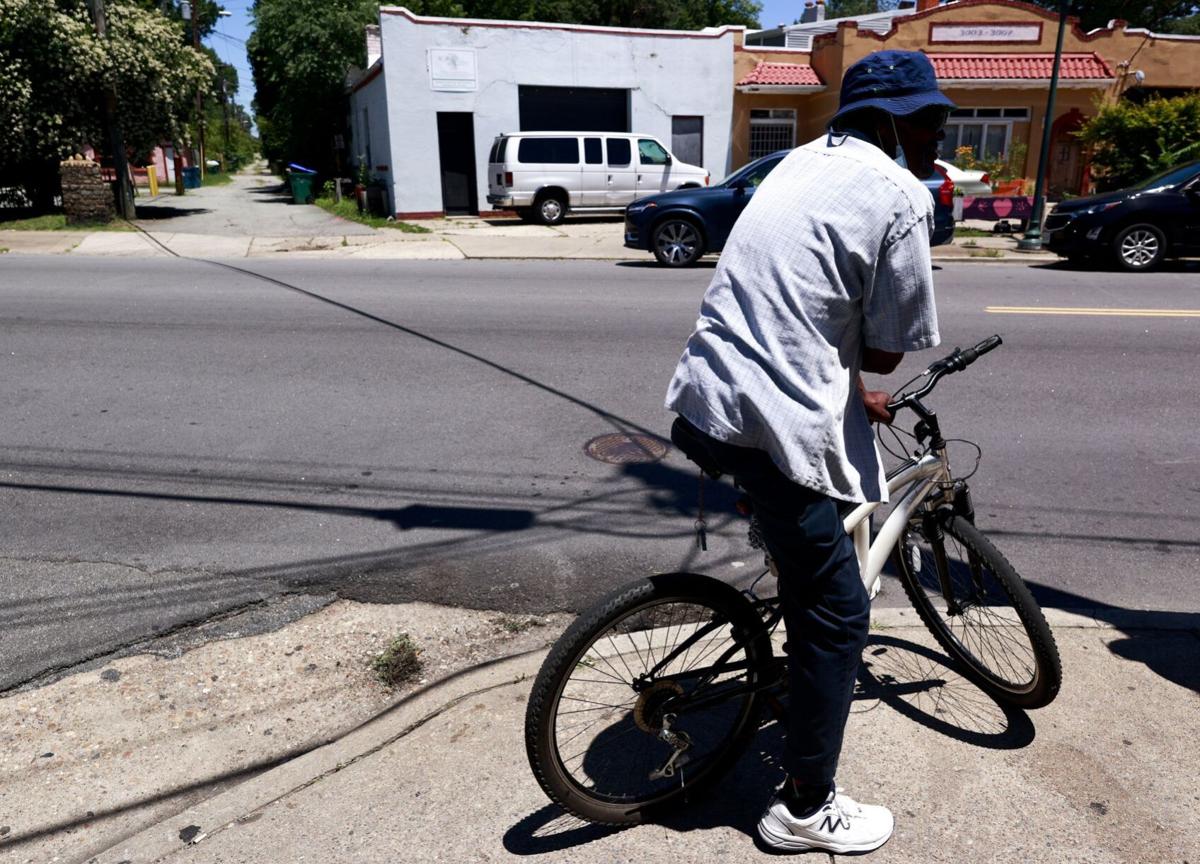 Greg Washington watches as traffic goes by as he talks about his community on Thursday, June 17, 2021 in Richmond, Virginia. 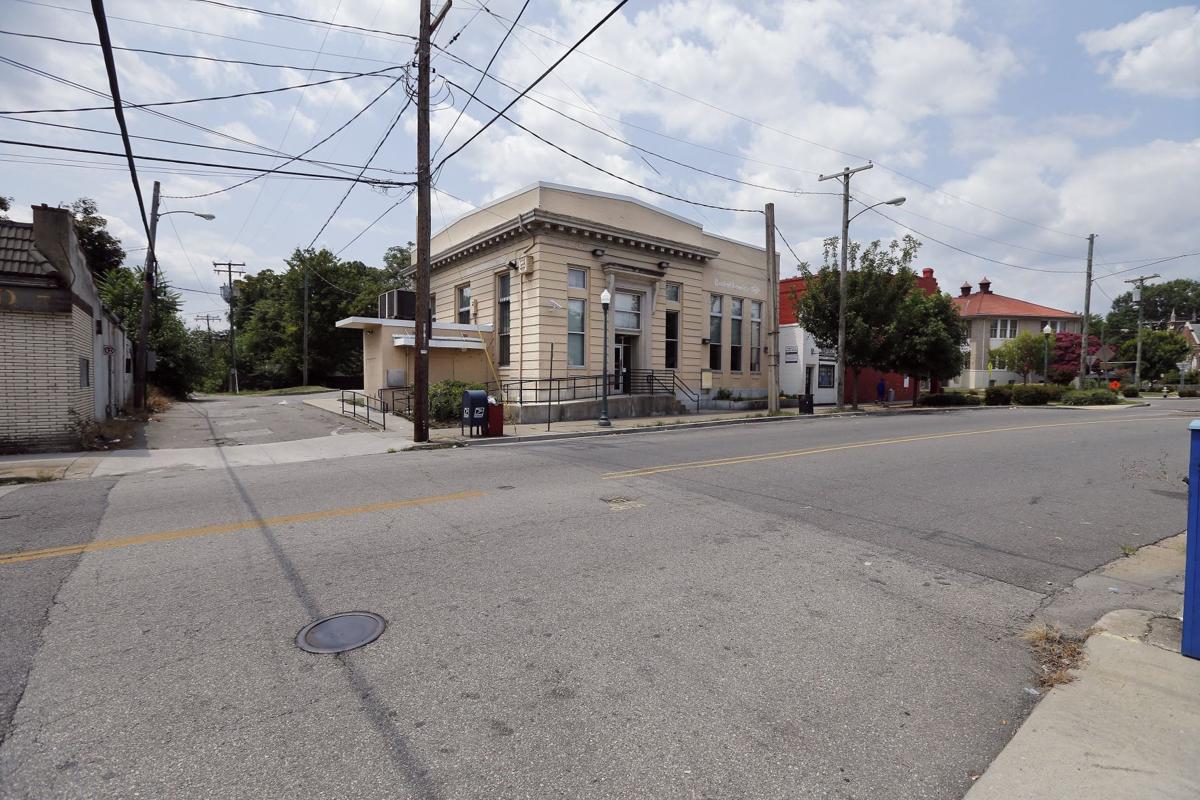 Highland Park’s Bank of America closed in March. A November 2019 report from the Federal Reserve Board of Governors found that between 2012 and 2017, bank branches in the U.S. fell by 6,764; moreover, 5,432 of those were in urban areas. 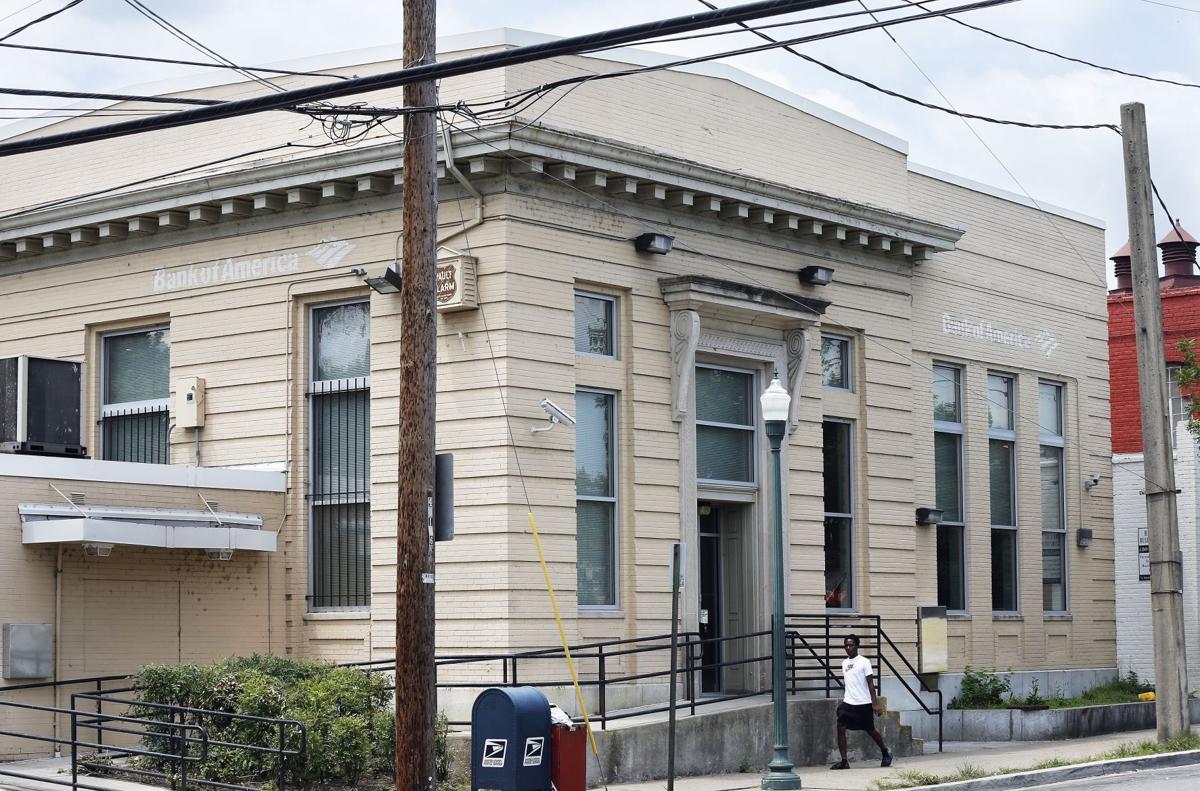 The Maggie Walker Community Land Trust is accepting requests for proposals for the former Bank of America branch in Highland Springs.

The bustling traffic circle with half a dozen exits is a local landmark and gateway in Highland Park: One spoke leads to New York Fried Chicken and the Six Points Innovation Center; others are lined with churches, a senior living facility and the Six Points Express Mart. And off the East Brookland Park Boulevard exit, behind the Express Mart, stands a vacant bank building that residents hope could soon be home to a community anchor, maybe a grocery store or a child care center or a police station. And unlike most business deals, the people who live in the community will have a say in what comes next.

The Bank of America branch closed in 2017, and now the building houses nothing but an ATM. In 2019, the property was donated to the Richmond Land Bank through the Maggie Walker Community Land Trust. The land trust is taking the building through a community-driven process to decide what the building should become, intending to find a company that best matches what the neighborhood wants.

Last year, the land trust contracted Storefront for Community Design, a Richmond nonprofit design studio, to survey and engage with the North Side community to hear feedback regarding possible uses for the building. According to Storefront’s Community Engagement Report, an online survey was conducted in late 2020 and got 95 responses — 88 of them from North Side residents.

Jo White, a community activist and CEO of Saving Our Youth, a nonprofit focused on youth initiatives, said the agency of having a say in what goes into the community is not something Highland Park residents had in the past.

The Richmond Times-Dispatch spoke with eight Highland Park residents, seven of whom reside nearby the Six Points corridor where the building stands. Out of those eight residents, two knew about and participated in the survey. The others said they were unaware of both the survey and the bank project.

A few blocks down from the former bank, on a worn wooden porch attached to a yellow stucco home on Second Avenue, Clarence Jefferson watches the cars and people pass by. Greenery and vines are slowly beginning to grow on the roof of his house. He’s owned his fenced-in home for approximately 33 years.

He and others said the community is experiencing drug-related issues, gun violence and homelessness.

“The community, to me, I haven’t seen a change,” the former Richmond deputy sheriff said.

Jefferson said he wasn’t aware of the survey and doesn’t support the idea of a grocery store because he thinks it’ll become another place for large groups to gather outside.

“I’m happy to drive to Kroger,” said Jefferson, who believes what the community could really use in the bank building is a new police precinct.

A few doors down from Jefferson is Shelia Evans, who has rented her home for 20 years. She was also unaware of the survey, and agrees with Jefferson about not wanting a grocery store due to safety and crime-related concerns. Evans also feels the community is undergoing several issues and feels another police precinct would be ideal.

Her 95-year-old mother lives in the house next door. Evans said her mom is afraid to leave the house unaccompanied because of frequent incidents involving gun violence.

“You can’t sit out here, you don’t know what they’re going to do,” the former Richmond Public Schools employee said.

Several residents, including Jefferson and Evans, pointed to the Six Points Express Mart, located at 2933 Second Ave., as a problem area within the community that fuels their hesitation toward another possible grocery store. Evans said the area surrounding the store is a hot spot for drug use, distribution and loitering, adding the store “ain’t nothing but a drug hazard.”

In response to the concerns, store manager Sam Ali said he didn’t understand why residents were concerned with the Six Points Express Mart specifically when all the stores in the area experience similar issues. He said he reports all the illicit behavior he witnesses to the Richmond Police Department, but nothing is done about it, a sentiment shared by others within the community.

“I’m not the one selling them the drugs,” said Ali, whose uncle owns the store.

Angela Lehman, who lives a few blocks over from Jefferson and Evans, knew about the survey and participated. She voted for a community or child care center. Lehman said that Storefront should’ve done more to gain community input and survey participation.

“If they want to hear from people in the neighborhood, especially those who’ve lived here for a long time, they need to work harder,” said Lehman, who’s lived in her home for three years.

Storefront’s executive director, Shawn Balon, said the survey and community engagement was conducted in October, November and December of last year during the second wave of the COVID-19 pandemic. He said because of this, the team couldn’t do as much in-person engagement to promote the survey.

One of the recommendations put forth by Storefront in the Community Engagement Report was for the continued consultation with the community before the final request for proposals is approved, possibly through another, targeted survey. The report also recommends that the MWCLT engage with the community during the construction and development of the project to ensure voices are heard.

While not directly involved with the project, White said she promoted Storefront’s efforts during the Highland Park Quality of Life meetings, which she runs through the Richmond Guardian Angles safety patrol group. However, she added that it’s up to the community themselves to want to get involved with stuff, adding she herself has struggled with community engagement in the past.

The project is currently in the request for proposals phase. According to MWCLT CEO Erica Sims, once the deadline for the RFP hits on Sept. 8, the MWCLT staff will review and summarize them then pass them along to their citizen advisory panel. Then, as the timeline explains, the RFP respondents will present their proposals to the advisory panel during a public meeting on Aug. 25, with a formal recommendation from the panel to the board scheduled for Nov. 3. The MWCLT board will then make a final vote as to who develops the property on Nov. 15.

For more information about the project, visit www.richmondlandbank.com/bank-of-america-brookland-park.

Weekly coronavirus testing among K-12 students and staff, a critical anchor in identifying the level of COVID-19 spread within schools, is bei…

A man waits for a bus at the highland park stop on Thursday, June 17, 2021 in Richmond, Virginia.

Nicholas Rodriguez work on his lawn on Thursday, June 17, 2021 in Richmond, Virginia.

a chair is seen on a vacant lot in Highland park on Thursday, June 17, 2021 in Richmond, Virginia.

Greg Washington watches as traffic goes by as he talks about his community on Thursday, June 17, 2021 in Richmond, Virginia.

Highland Park’s Bank of America closed in March. A November 2019 report from the Federal Reserve Board of Governors found that between 2012 and 2017, bank branches in the U.S. fell by 6,764; moreover, 5,432 of those were in urban areas.

The Maggie Walker Community Land Trust is accepting requests for proposals for the former Bank of America branch in Highland Springs.