Bally’s proposed casino resort would include a 250-room hotel; a 3,000-square-foot indoor/outdoor pool area; 13 food and beverage options; and a 45,000-square-foot multiuse event space with 3,000 seats. 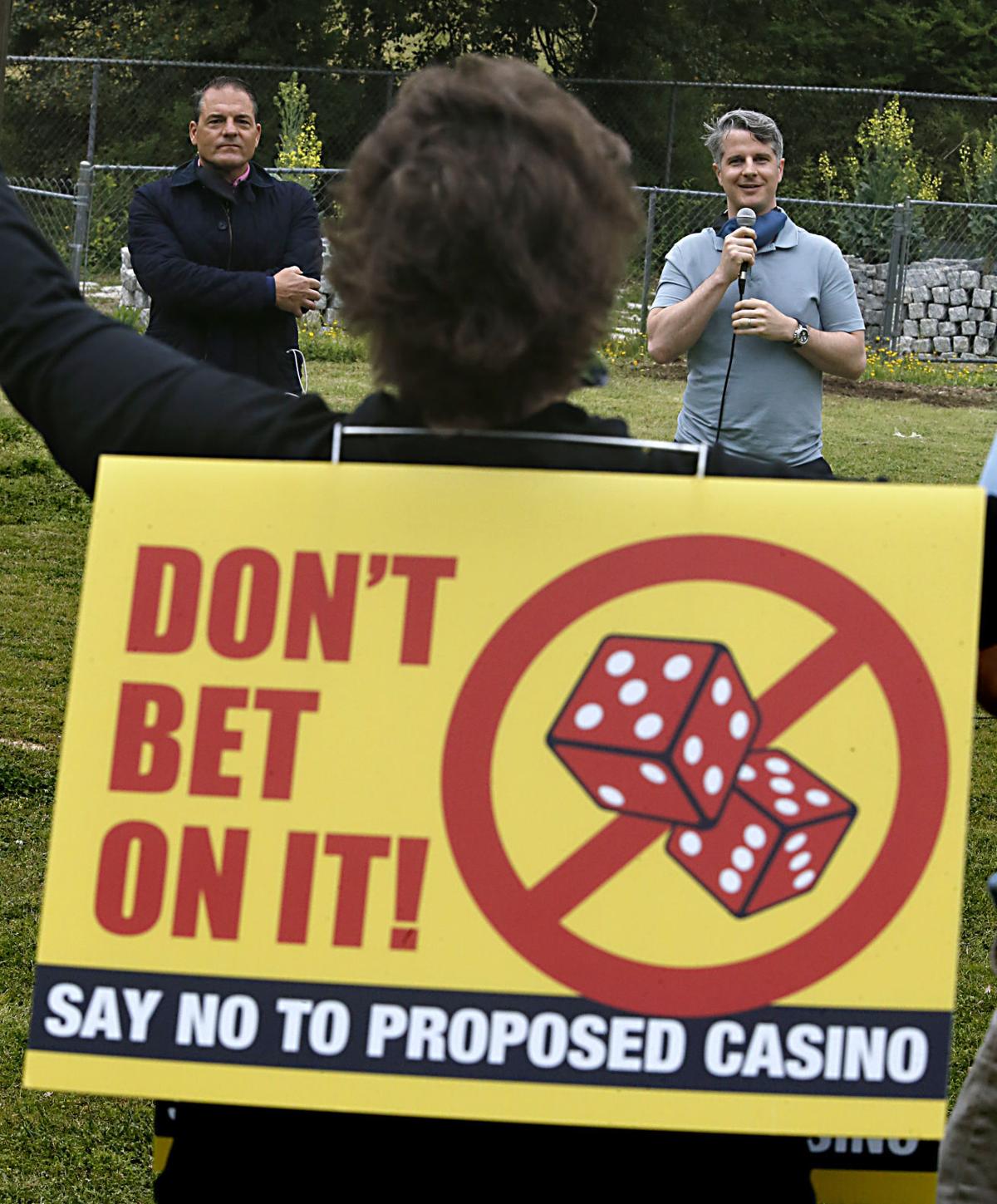 Jeanne Walls, center, back to camera, a Stratford Hills resident, wears a protest sign as she asks a question of Matt Sodl, left, Inovative Capital Managment Partners and Michael Monty, right, with Bally's Corp.at a small gathering near Battery Park in Richmond, VA Wednesday, April 14, 2021. The event was to adress members of the public and answer questions from citizens and the media.

The city announced the decision Wednesday, after two weeks of public protests against the Rhode Island-based company’s plans to build a $650 million casino resort in the northeast quadrant of the Chippenham and Powhite parkways.

The city is evaluating two remaining proposals ahead of a planned referendum in November, when Richmond voters will decide whether to permit a casino resort in the city.

Leonard Sledge, director of the city’s economic development department, said a panel eliminated the Bally’s project “due to concerns about site access, environmental factors, and required approvals from non-city entities that may not be granted or extend the project timeline.”

“We appreciate Bally’s interest to develop a resort casino project in Richmond,” Sledge said in a news release. “We also appreciate the many Richmond citizens who have shared their thoughts throughout this process.”

Protesters cited Bally’s potential impact on traffic, the environment, public safety, and the graves of enslaved and freed Black people whose descendants still live nearby.

Signs of trouble bubbled up last week when the company asked the city to consider an alternative location. Bally’s officials said the proposal submitted to the city had identified property behind the Rosie’s Gaming Emporium on Midlothian Turnpike as a secondary site. The city refused to consider changing the location.

The company also sought to allay public concerns about traffic congestion on Forest Hill Avenue by changing the road configuration in its primary development plan, offering to build new parkway ramps with access to the casino resort.

“We are disappointed and surprised in the Evaluation Panel’s decision. We are the best operator to partner with the City on this endeavor and we provided the largest financial package with the most economic benefit to RVA residents and business owners,” said Bally’s President and CEO George Papanier. “We were deeply committed to this project, as well as to becoming a responsible neighbor and member of the Richmond community. Should the City reconsider its decision we would be pleased to reengage.”

Patricia Kinser, a resident of the Stratford Hills area who helped organize the opposition to the Bally’s project, said some area residents will continue to protest against a casino at any location in the city. She said some will also advocate for a permanent plan to preserve as natural green space the area where Bally’s proposed to build a casino.

“We’re thrilled with the news,” she said. “We’re in celebration mode and will be back into action very soon.”

Richmond requested proposals for a casino resort development in December, under a new state law allowing it and four other localities — Danville, Norfolk, Portsmouth and Bristol — to permit a single casino license if approved by local voters.

The city initially received six proposals earlier this year. It struck three of them a few weeks later.

The two remaining projects belong to the Washington media conglomerate Urban One and The Cordish Companies, which operates several casinos across the country under its Live! brand.

Urban One, which operates four radio stations in the Richmond area, has proposed building a casino resort off Commerce Road on land currently owned by Philip Morris USA. The company is partnering on the project with Peninsula Pacific Entertainment, the Los Angeles-based owner of the Colonial Downs racetrack and Rosie’s gaming emporiums.

The Urban One development proposal includes plans for a 100,000-square-foot casino, a 20-acre park, 12 restaurants, a theater venue, television and radio studios, and a 250-room hotel.

Information on the remaining casino proposals and the evaluation process can be found at www.rva.gov/economic-development/resort-casino.

VIDEO: March for Life demonstration at the Capitol in Richmond

Harvest Moon to rise on Sept. 20, days before changing season

Harvest Moon to rise on Sept. 20, days before changing season

Williams: Richmond's casino proposals have pitted neighborhood against neighborhood. We need an equitable outcome, or no casino at all

It took days for “build it over there” to emerge as a mantra as the proposals for a resort casino in Richmond narrowed down to three: a Philip…

Bally’s proposed casino resort would include a 250-room hotel; a 3,000-square-foot indoor/outdoor pool area; 13 food and beverage options; and a 45,000-square-foot multiuse event space with 3,000 seats.

Jeanne Walls, center, back to camera, a Stratford Hills resident, wears a protest sign as she asks a question of Matt Sodl, left, Inovative Capital Managment Partners and Michael Monty, right, with Bally's Corp.at a small gathering near Battery Park in Richmond, VA Wednesday, April 14, 2021. The event was to adress members of the public and answer questions from citizens and the media.