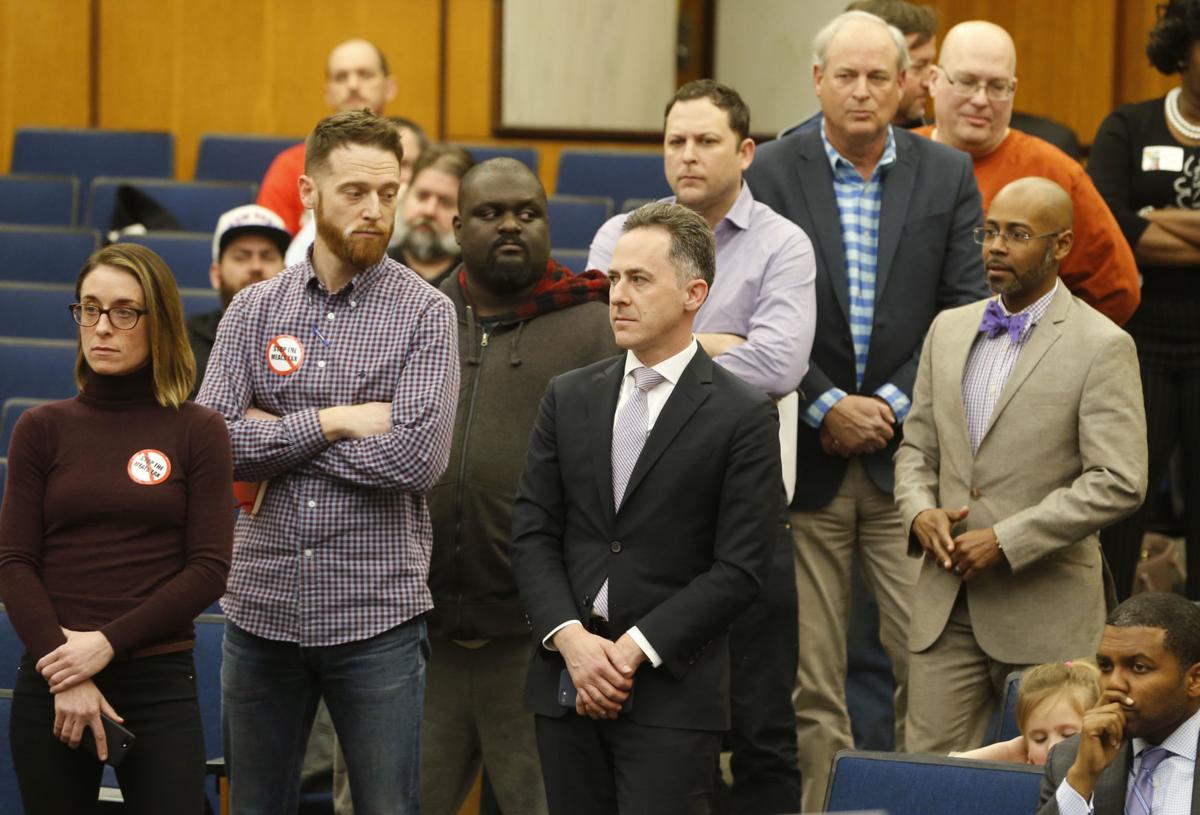 Richmond schools Superintendent Jason Kamras (center) makes his way past a line of meals tax opponents to voice his support for the measure during a hearing at City Hall. At right (in tan suit) is School Board member Patrick Sapini. 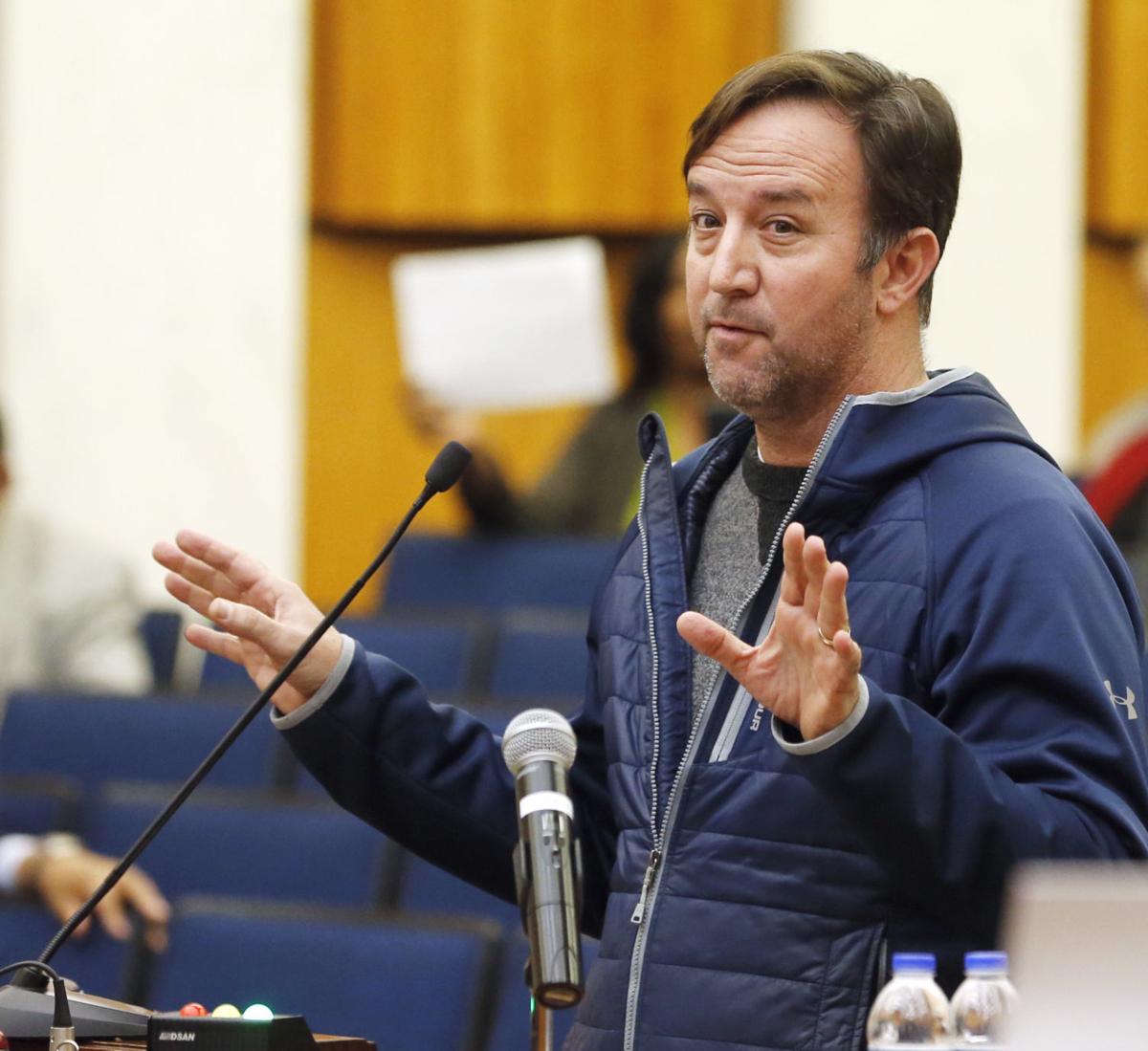 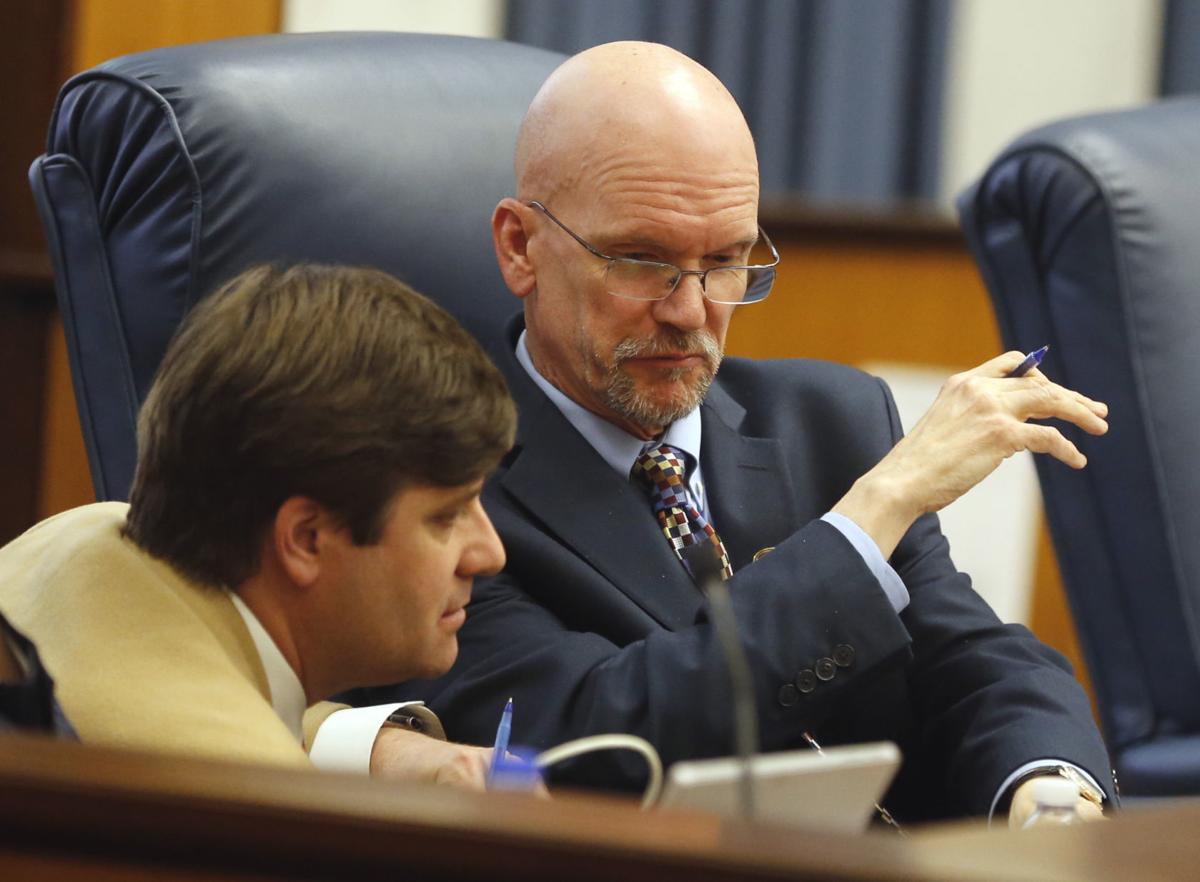 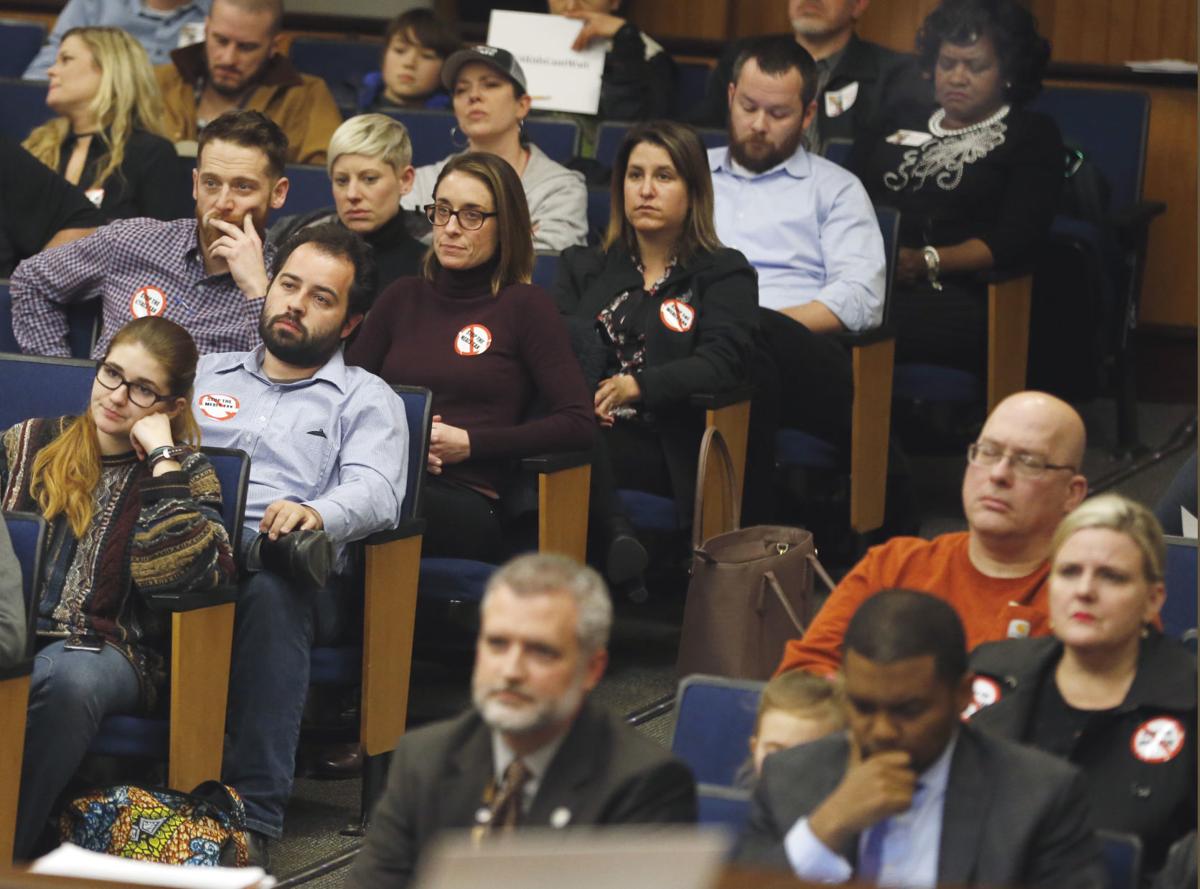 Wearing stickers, opponents of the mayor’s proposed meals tax listen as city financial representatives outline the logic behind the tax during a public hearing at Richmond City Hall on Monday, Feb. 5, 2018. 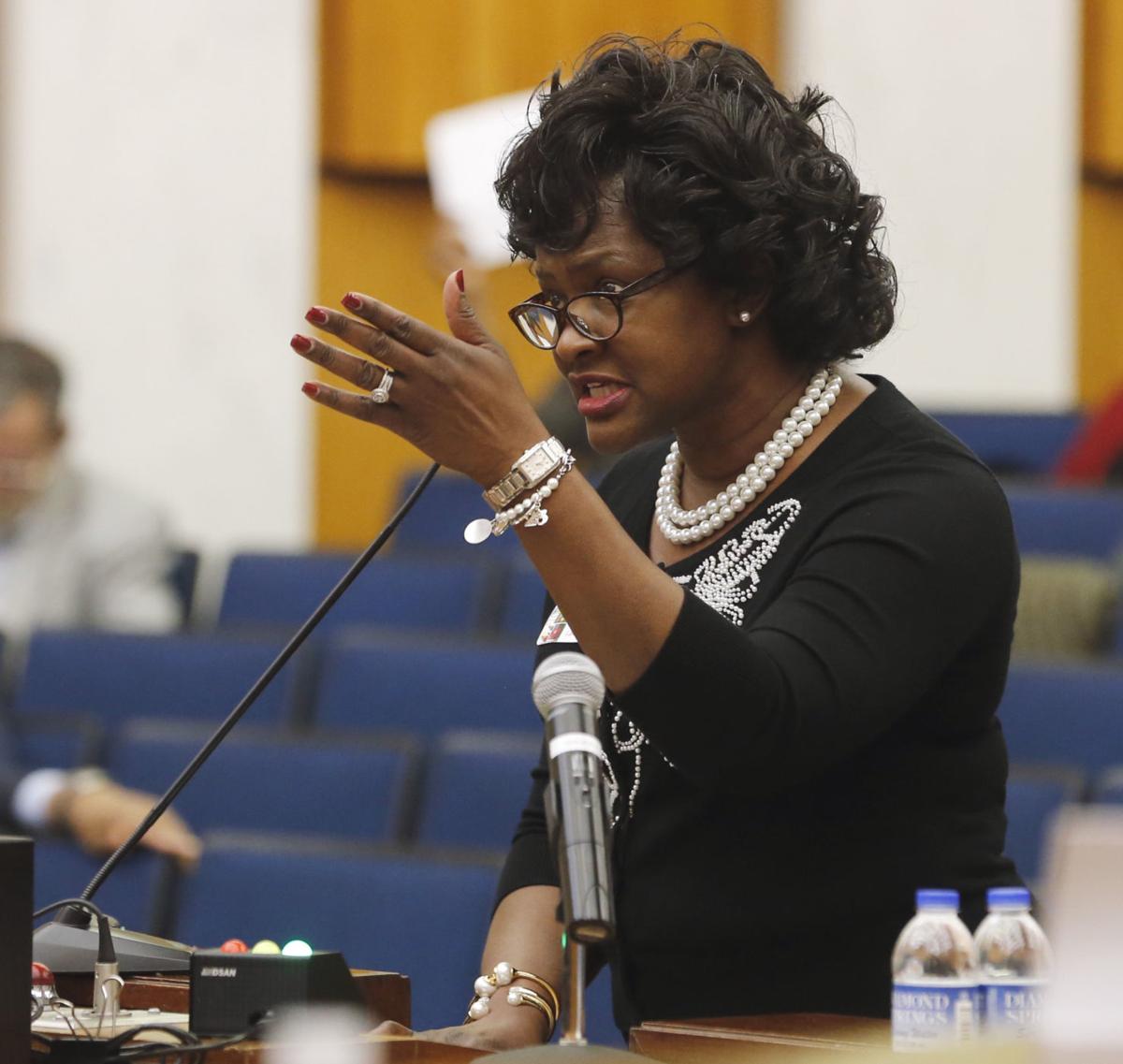 Mariah White of Richmond says she opposes the meals tax because “the plan falls short” of a comprehensive proposal to fund schools.

With five council members recommending its approval, Richmond Mayor Levar Stoney’s plan to fund Richmond Public Schools construction by raising the city’s meals tax appears to have the support it needs to pass at next Monday’s council meeting.

The council’s Organizational Development Committee, on which all of the members sit, on Monday voted to recommend the mayor’s proposed meals tax increase for approval at the full council’s meeting next week.

“If not this, what? If not now, when?” said Hilbert, the council president. He said he respected the mayor’s effort to address the school system’s critical needs.

Stoney had said he hoped the council would vote on the plan at its meeting scheduled for next Monday.

Four council members sought a delay, saying they wanted to gather further input in their districts and propose amendments to the mayor’s plan. They argued that pushing the proposal forward for a final vote on Monday would not provide ample opportunity for residents to weigh in on the controversial plan.

“I’m not opposed to a meals tax increase, but I don’t think (the mayor’s plan) goes far enough, and I don’t think it should be bared by one industry here,” said 5th District Councilman Parker Agelasto. He added later: “I don’t think pushing something through and not having dialogue and amendments is the best way.”

Gray, who has already publicly said she opposes the plan, said she wanted council members to hold meetings in their districts to gather additional feedback on the matter: “We are being accused of forcing this thing through without much transparency,” Gray said.

Newbille, the council’s vice president, strongly objected to continuing the matter. She and other supporters acknowledge the flaws with the plan — namely, that it does not meet the price tag of the School Board’s short-term needs or address issues of school closures and rezoning — but echoed the urgency with which Stoney has pushed the proposal since unveiling it two weeks ago.

“How long do we wait?” Newbille said. “Not any longer. It’s unacceptable.” She added later: “We can’t get started because we don’t have the full plan? Come on.”

The council action followed the first public hearing on the proposal since the mayor announced it.

About 10 people spoke against the mayor’s plan, saying it would hurt restaurants. They asked the council to consider other options to fund school improvements that spread across the city’s tax base.

Shannon Conway, of the Rueger Restaurant Group, told council members that she opposed the plan. She expressed concern that the revenue projections did not take into account the business she believes eateries will lose as a result of the hike.

“Sustainable assumes that we will not see a decline in patronage and new business in RVA,” Conway said. “Make no mistake, we will lose business because of this.”

Council members, even those in support of the mayor’s plan, said they agreed that they must examine other taxes to make up the difference.

“Is the meals tax the only tax that we should consider?” Robertson said. “I don’t think so, but that’s where we are today.”

Stoney proposed increasing the meals tax by 1.5 percentage points — from 6 to 7.5 percent — to generate an estimated $9.1 million per year. The new revenue would allow the city to expand its debt capacity and borrow up to $150 million in the next five years to fund school construction and renovations.

Currently, the combined sales and city meals tax is 11.3 percent; the mayor’s proposal would increase that figure to 12.8 percent.

The mayor announced the proposal about a month after the Richmond School Board endorsed a $224.8 million plan to replace some of the district’s overcrowded and dilapidated buildings. Stoney’s proposal would leave a $74 million gap in funding for the plan, but School Board leaders have praised it.

On Monday, three School Board representatives — Liz Doerr, Patrick Sapini and Cheryl Burke — left the ongoing board meeting on the 17th floor to address the council at its meeting and ask it to support the plan. So, too, did Jason Kamras, the division’s newly minted superintendent.

About a dozen people spoke in favor of the mayor’s plan during the public hearing. Supporters conceded that the proposal is not perfect, but said it’s the only option on the table to address the division’s long-deferred needs.

“It’s not 100 percent of what we need, but I’ll take some new schools over zero,” said Katherine Jordan, president of the Fan District Association, who told the council that she supported the mayor’s plan. “It’s been decades already.”

Michael Jones, the 9th District councilman, has said he supports the plan and argued a similar point. In South Richmond, the problem of overcrowding has been worsening each year, as has the condition of the school buildings, he said. A fix can’t wait.

“This is not the total answer. It’s not,” said Jones, adding that he wished the council could raise the tax higher than the mayor has proposed increasing it. “This is not the answer. ... It’s one small piece to get the ball rolling on the South Side.”

A public hearing will be held before any vote is cast on Monday.

Richmond schools Superintendent Jason Kamras (center) makes his way past a line of meals tax opponents to voice his support for the measure during a hearing at City Hall. At right (in tan suit) is School Board member Patrick Sapini.

Wearing stickers, opponents of the mayor’s proposed meals tax listen as city financial representatives outline the logic behind the tax during a public hearing at Richmond City Hall on Monday, Feb. 5, 2018.

Mariah White of Richmond says she opposes the meals tax because “the plan falls short” of a comprehensive proposal to fund schools.