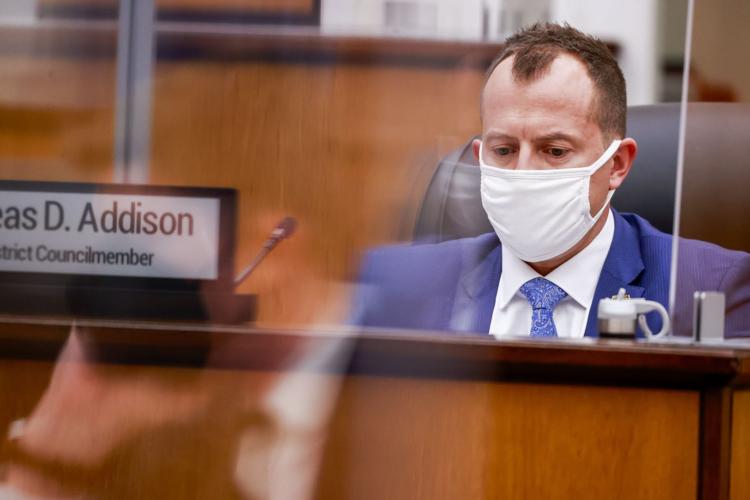 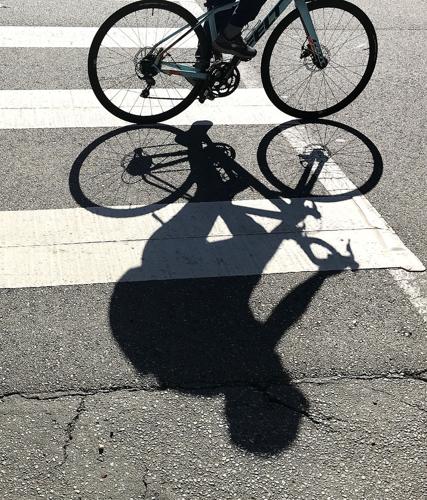 Cyclist are silhouetted againstthe crosswalk on Franklin Street, as they use the bike lanes to travel about downtown Richmond, Friday 10/4/2019. 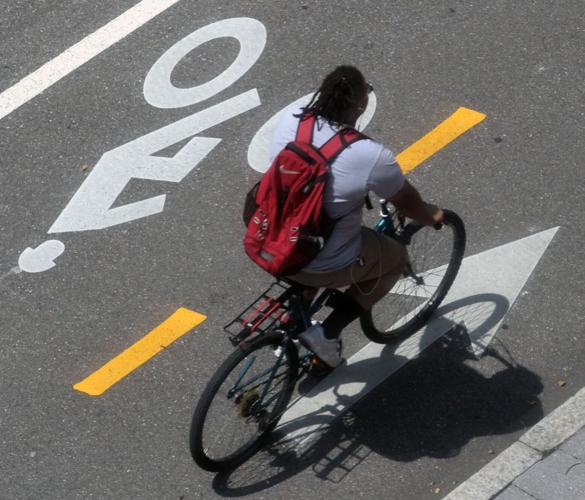 A cyclist headed west in the bike lane in the 300 block of East Franklin Street in Richmond in August.

It’s unlikely that the Department of Mobility and Multimodal Transportation will be created by next month, as originally proposed in a recent four-page report by City Councilman Andreas Addison. Still, the proposal from Addison, who represents the 1st District, picked up a bit of speed this past week.

“We’re seeing an increasing opportunity of conflict between the future of our city and our residents already living here,” said Addison, chairman of the council’s Land Use, Housing and Transportation Standing Committee. “I believe there’s a need to look at ways to be responsive, ... innovative and looking to the future.”

The city’s Department of Public Works currently manages many transportation-related matters. Addison’s plan proposes splitting up its duties, so that planning, traffic engineering, parking and public right of way management is overseen by a new department director.

The four-page report prepared by Addison last month notes that there have been nearly 14,000 vehicle and pedestrian crashes over the past three years, resulting in 7,000 injuries and 42 deaths. The report also notes that the city is poised to receive tens of millions dollars annually from the newly formed Central Virginia Transportation Authority. The regional government organization manages about $200 million in annual tax revenue. The money is intended for local and regional transportation projects, and it includes a 15% carve-out for the GRTC bus system.

Addison said the rising concern about traffic safety, equitable public transit, new funding and climate change are good reason for the city to consider a new transportation department to focus on those matters, helping bring more focus to the development and maintenance of streets, sidewalks, crosswalks, parking, bicycle lanes and multi-use trails.

The idea of a city transportation department is not new.

In last year’s mayoral contest, candidate Alexsis Rodgers said she would create such a department if elected. Richmond Mayor Levar Stoney dismissed the idea. But during his re-election campaign, Stoney’s administration created the Office of Equitable Transit and Mobility within the Department of Public Works to more clearly distinguish transportation matters from the rest of the department’s portfolio.

Since then, the new office has promoted an expansion of the city’s bike-share program that includes free passes for public housing residents and started developing a new transportation policy guide.

According to Addison’s report, the office would be moved to the new transportation department. Public Works would still be responsible for urban forestry, street cleaning, snow removal, waste management and recycling, city fleet management and care of city-owned facilities and grounds.

“This isn’t meant to ... replace anybody” Addison said. “Y’all do great work for us. It’s more about making sure that you have the same collaboration and partnerships to do things quickly and agile as we look to implement these plans.”

Public Works Director Bobby Vincent advocated against the plan in Tuesday’s committee meeting, echoing past comments by the mayor and other administration officials about how the city had closed a transportation department decades ago because officials found it inefficient.

“Everything that has been mentioned from your bench today is currently being done by the Department of Public Works,” Vincent said. “The only thing that would be added would be more overhead [costs].”

Addison said discussions about the possibility of a new transportation department will continue as soon as next month when the council’s transportation committee meets again.

What can Americans do about far-right extremism?

Cyclist are silhouetted againstthe crosswalk on Franklin Street, as they use the bike lanes to travel about downtown Richmond, Friday 10/4/2019.

A cyclist headed west in the bike lane in the 300 block of East Franklin Street in Richmond in August.