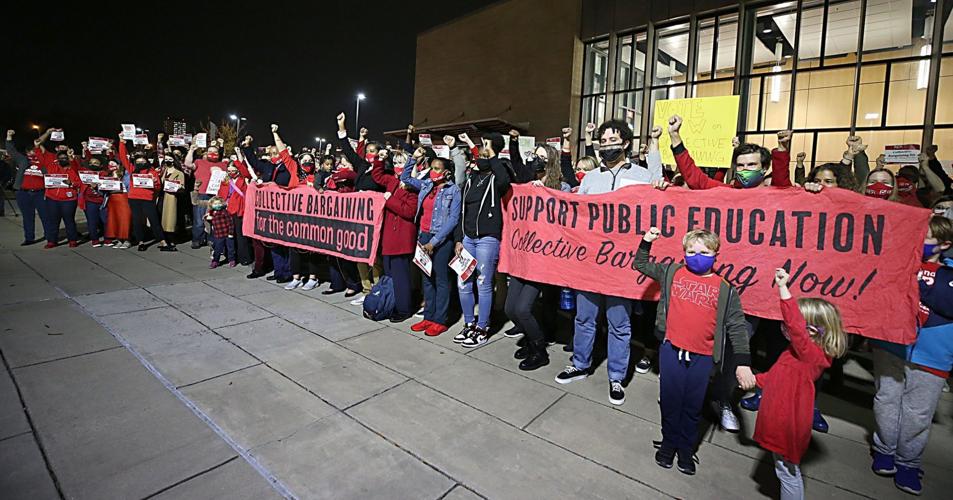 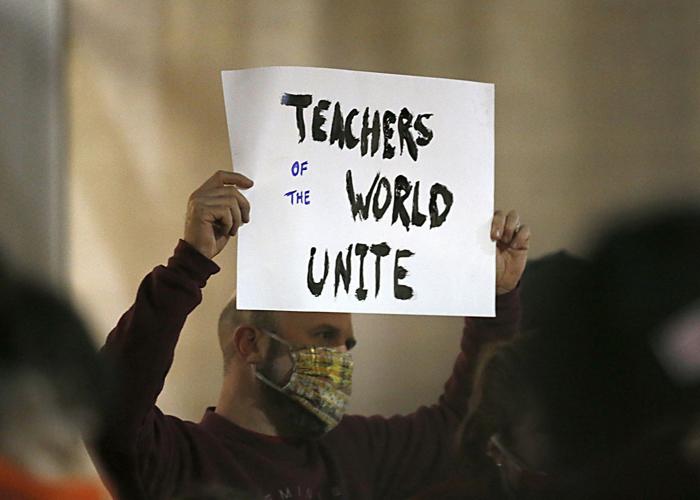 A man holding a Teachers of the World Unite sign was part of the crowd outside MLK Middle School during a rally before a school board meeting at the school in Richmond, VA Monday, Dec. 6, 2021. 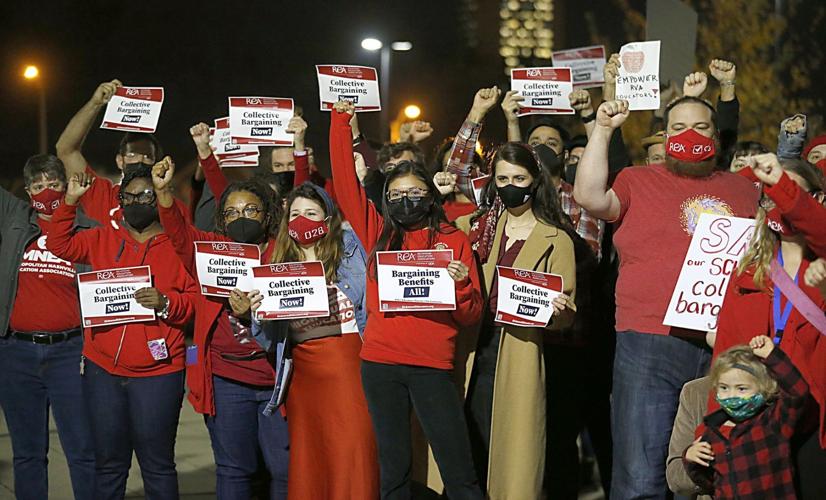 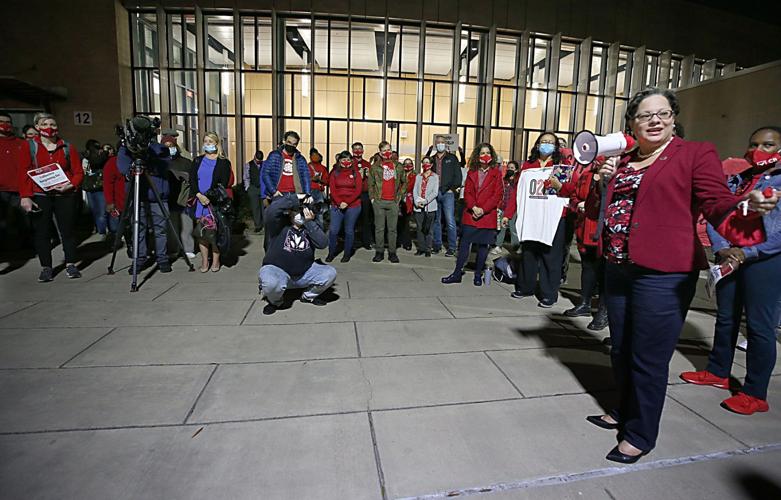 Sen. Jennifer McClellan, D-Richmond, spoke outside Martin Luther King Jr. Middle School on Monday during a rally before the meeting where School Board members approved collective bargaining for teachers.

The Richmond School Board on Monday became the first in the state to approve collective bargaining.

In an 8-1 vote, the board formally recognized teachers’ rights to negotiate contracts, ending a decades-long restriction. Jonathan Young cast the lone dissenting vote in a meeting that was at times contentious.

The commotion began when Dawn Page, who represents the 8th District, said she had concerns about voting on Monday. She said the district risked sabotaging itself if it didn’t study how much collective bargaining would cost first.

“We tend to pick and choose when to follow processes,” she said, criticizing her colleagues for not having a full board discussion on the recommendations from an ad-hoc committee. Virginia school boards cannot levy taxes, which means that salary negotiations have to be made within the constraints of the Richmond City Council.

The objection drew a sharp rebuke from the audience in support of bargaining, with exclamations that the School Board was attempting to stall. They also chanted a demand to vote on Monday night, and School Board Chair Cheryl Burke called a 10-minute recess. Some School Board members had a side conversation during the recess.

Teachers warned that if the body failed to pass collective bargaining, they risk a poor teacher retention rate and teachers leaving the district for neighboring counties. Teachers also said a seat at the table “without a fear of retribution” was integral to keep teachers in RPS.

Jerry Gunter, an instructional assistant with RPS for 11 years who works at River City Middle School, told the School Board that his line of work starts at a low wage, and collective bargaining could be a solution.

The Richmond Education Association, which has ties back to the 1930s according to its president, has planned to take advantage of a new state law that took effect May 1, which lifted the prohibition on unionizing by public employees such as teachers and city workers. The resolution, initiated by School Board members Kenya Gibson, 3rd District; Stephanie Rizzi, 5th District; and Shonda Harris-Muhammed, 6th District, was introduced in October.

Gibson has pushed for a swift vote on collective bargaining, noting concerns about the uncertainty of its future under the governorship of Republican Glenn Youngkin.

Young, the only vote against collective bargaining, said it was the wrong move for addressing the school division’s issues.

Boaz Young-El of the Virginia Education Association said that the urgency isn’t centered solely on Republican leadership, but also that teacher associations have been fighting for collective bargaining rights in Virginia for decades.

“We’ve been waiting for this for generations, and the time is now,” Young-El said in an interview. “I think we have the political will to do so. And I think that we [should] act sooner rather than later. And I think our folks are more than ready.”

Collective bargaining has a controversial history in Virginia. In 1977, the Virginia Supreme Court ruled that a law that allowed public sector collective bargaining was invalid. The move made any public workers, like teachers and city workers, ineligible for unionization. On May 1, the law to repeal the prohibition, carried by Del. Elizabeth Guzman. D-Prince William, went into effect, but not without a fight.

The Virginia School Boards Association, a nonprofit that trains school boards on effective governance, took a legislative stance against the move, citing budget constraints and student achievement. Last year, outgoing Gov. Ralph Northam made a bid to delay the date of the effect of collective bargaining — the bill was passed in 2020, but didn’t take effect until this year.

It’s unclear what teachers can expect when it comes time to negotiate contract terms. When the School Board’s attorney, Jonnell Lilly, had concerns with the initial draft resolution, a committee was formed to create changes, which took hours of negotiating between School Board members and representatives from the education association.

“We made history. We are the first,” said Keri Treadway of the REA to a crowd of teachers celebrating the victory. “But we have all of our brothers and sisters around the commonwealth that are going to be going through the same fight. We need to help them. It is about solidarity, it is about support. So we take this win and we spread it across the commonwealth.”

Richmond police on Wednesday said a tip from a “hero citizen” prevented a mass shooting at the Dogwood Dell Fourth of July celebration on Monday.

The press conference will be streamed at 2 p.m. Wednesday at richmond.com.

A man holding a Teachers of the World Unite sign was part of the crowd outside MLK Middle School during a rally before a school board meeting at the school in Richmond, VA Monday, Dec. 6, 2021.

Sen. Jennifer McClellan, D-Richmond, spoke outside Martin Luther King Jr. Middle School on Monday during a rally before the meeting where School Board members approved collective bargaining for teachers.