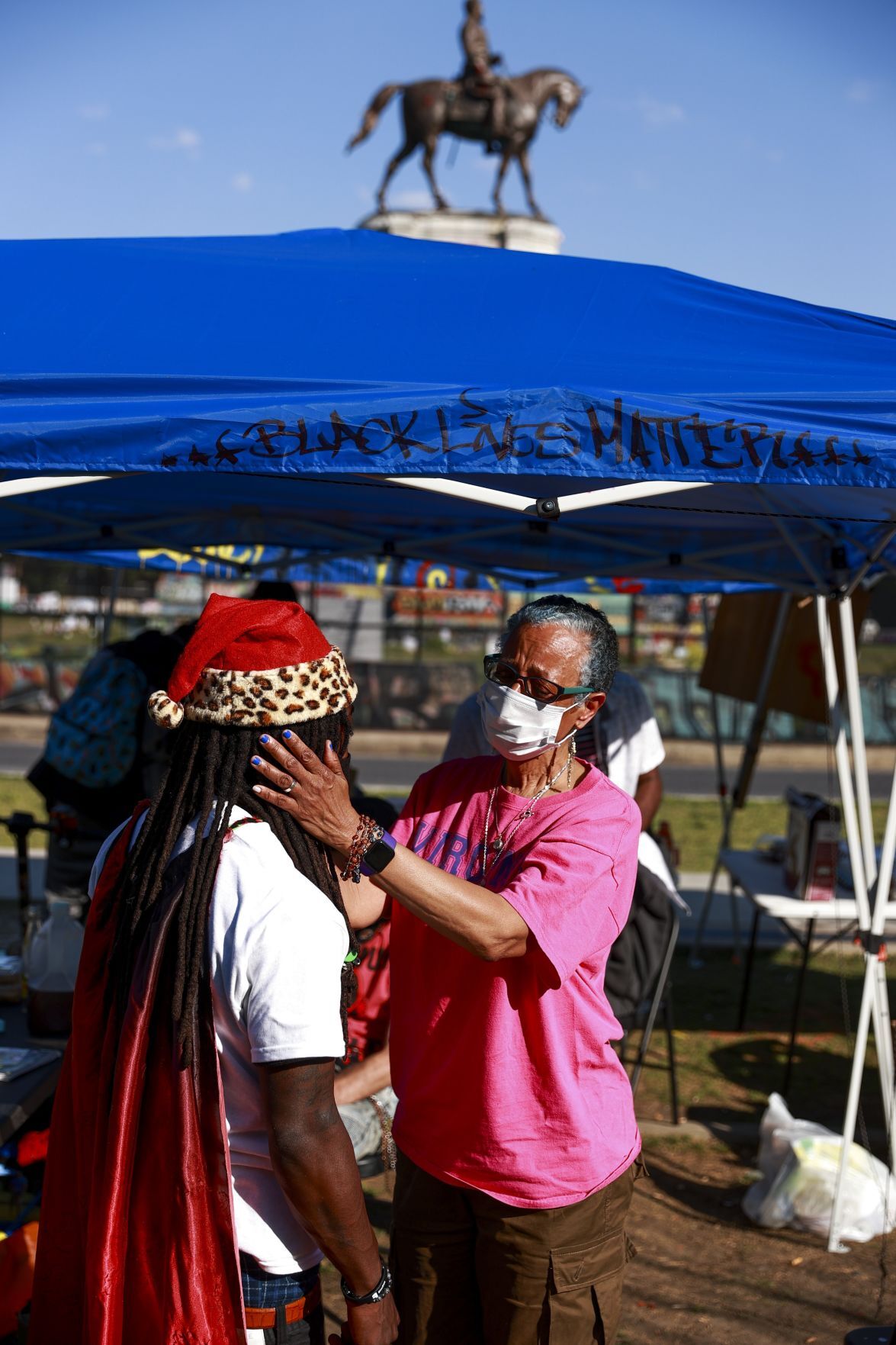 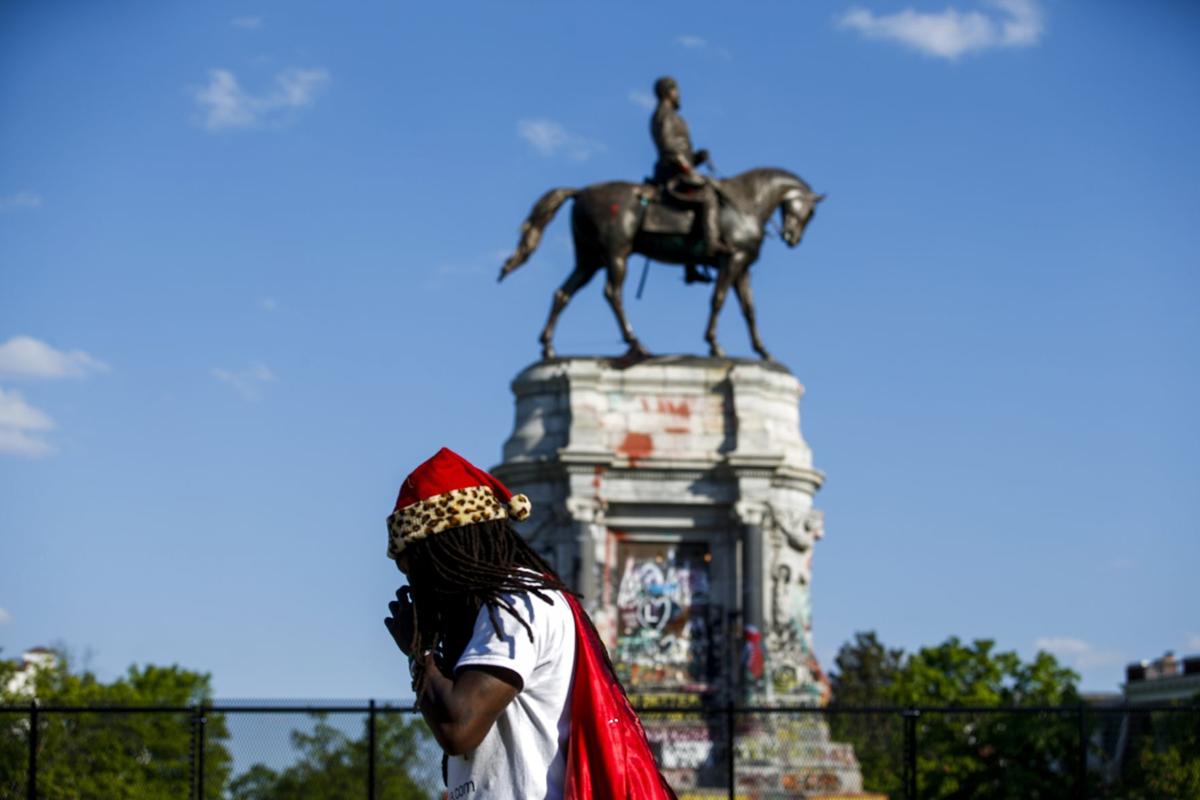 Bee The Gardner makes his way through Lee circle following the verdict in the case of the death of George Floyd on Tuesday, April 20, 2021 at R. E. Lee monument in Richmond, Virginia. 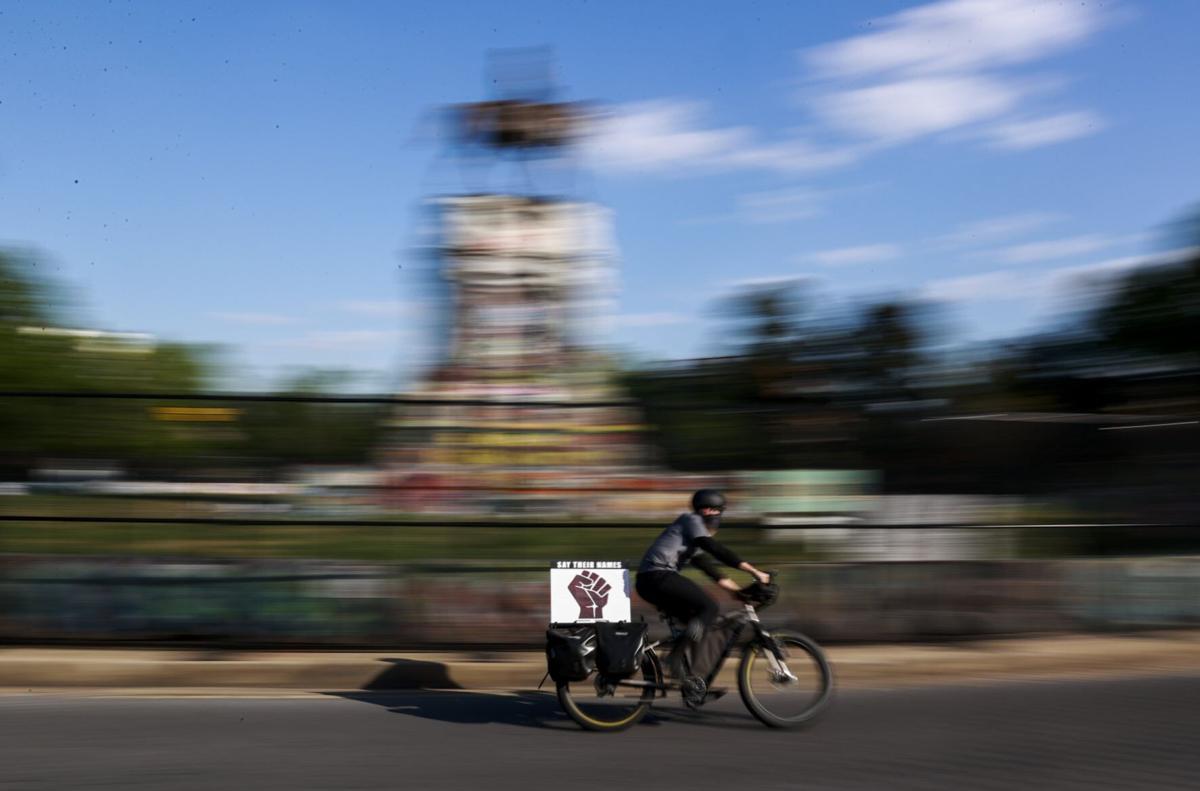 A man with a “Say Their Names” sign rode past the Robert E. Lee statue on Richmond’s Monument Avenue on Tuesday after the guilty verdict. 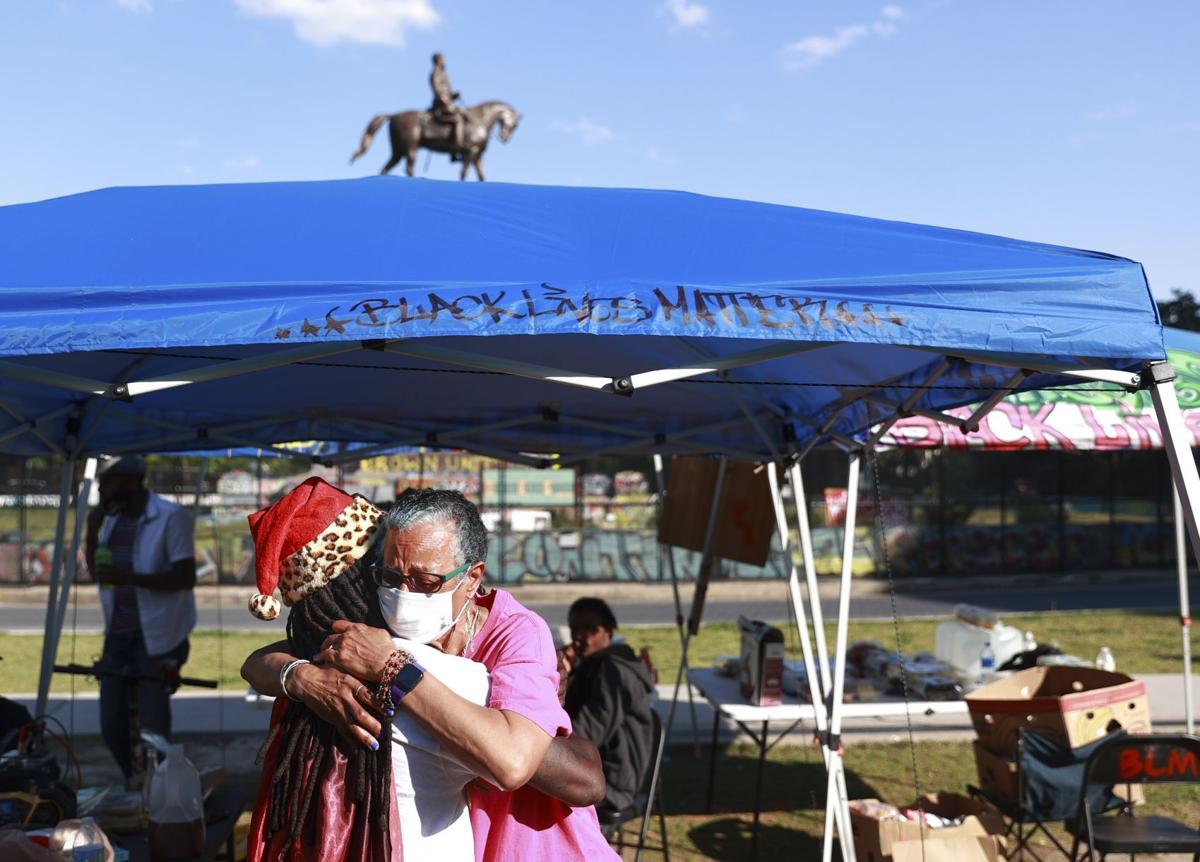 Renee Hill embraced Bee the Gardener at the Robert E. Lee monument on Tuesday after a jury convicted a former Minneapolis officer of murder in George Floyd’s death.

She sped toward the community that has held her up in the 11 months since Derek Chauvin, a white Minneapolis police officer, killed George Floyd.

Her parents had yet to process the Minneapolis jury’s verdict on Tuesday in the back seat before Hill parked next to the median surrounding the Robert E. Lee statue on Monument Avenue and wept.

As motorists honked their horns, she described how she felt being back at the space where she and thousands of other Richmonders participated in protests last summer in pursuit of racial justice.

“I just need to hug people,” she said, running across the cobbled streets in her pink Virginia State University T-shirt to share her relief with Bee the Gardener, who stood facing the 8-foot fence that separated him from the informally renamed Marcus-David Peters Circle.

He had planted a garden there, in the space renamed for a Black man killed nearly three years ago during an interaction with Richmond police while he was in a mental health crisis.

Floyd’s killing last May spurred months of protests in Richmond centered on the site, resulting in the removal of the city’s Confederate monuments and new efforts to reform policing in the city and throughout Virginia. Tuesday’s decision elicited deep feelings in many who took to Richmond’s streets last year to demand change.

It also brought them back to the space that had housed teach-ins, graduation ceremonies and pick-up basketball games; a site that repeatedly was overrun by police in riot gear who launched tear gas and shot rubber bullets.

“They got him,” a driver yelled, honking intermittently alongside dozens of other vehicles.

Bee’s nods quickened and his face scrunched as Hill pulled him in and he finally let himself cry.

“If they acquitted someone who did something so egregious, it [would be] hopeless,” Hill said. “This gives me some hope that we can get up this mountain.”

Even in the moments before the verdict was announced, Hill questioned whether Chauvin would elude justice. She was relieved when she saw that the jury found him guilty in Floyd’s murder.

“It was the people power that resulted in the verdict that was read today,” said Blanding, for whose brother the circle was informally renamed.

Even so, Blanding said it should not have taken a mass protest movement to magnify Floyd’s case. And she said many are still fighting to ensure that being Black does not result in unjust incarceration, brutalization or death at the hands of police.

“We’re fighting for humanity,” she said. “We need to normalize holding police accountable.”

“Does a guilty verdict really mean that George Floyd’s family gets justice — just knowing that we have so far to go?” she said.

Within three weeks of Floyd’s death last May, Richmond Police Chief William C. Smith resigned at the request of Mayor Levar Stoney, as both came under scrutiny for the city’s response to local protests.

The weekend after Chauvin murdered Floyd on Monday, May 25, people in Richmond started holding protests day and night for weeks on end in the middle of a pandemic. Most nights were peaceful; some erupted into chaos. People set fire to police vehicles, dumpsters and a GRTC bus.

On June 1, Richmond police, unprovoked and without warning, fired tear gas at a large crowd of people at the statue of Robert E. Lee on Monument Avenue, more than 20 minutes before a mandatory curfew. About two weeks later, as the nightly protests persisted, a police officer drove his SUV through a crowd of protesters.

Skirmishes between protesters and police escalated as authorities transformed the city’s police headquarters on West Grace Street into a makeshift fortress with concrete culverts and barriers. Riot police met the protesters there with rubber bullets, tear gas, pepper spray and flash bangs.

The agency rotated through leadership.

Throughout June, protesters succeeded in toppling several statues, including the monument to Jefferson Davis, which a city commission in 2018 determined should be removed. The commission advised the city to “reinterpret” the other monuments in a contemporary light, but Stoney ordered their removal amid the crisis this summer, saying that they posed a risk to public safety and should no longer be honored.

Virginia Gov. Ralph Northam also ordered the removal of the Robert E. Lee statue on Monument Avenue, but it still remains pending an appeal before the Virginia Supreme Court.

At the end of July, the Richmond City Council approved legislation to create a new police oversight board and adopt a new emergency response model known as the “Marcus Alert.”

State lawmakers last year also passed legislation backing the new system, ordering state behavioral health and criminal justice agencies to establish guidelines for police in responding to and interacting with people in psychiatric crisis or who have a developmental disability, such as autism.

In a statement, Northam called the verdict Tuesday “an important step.”

“It is a step towards accountability for police. It is a step towards justice — for George Floyd, for his family, for his community, and for our entire country,” the governor said. “I pray that today brings some small comfort to the family of George Floyd and all who loved him. May we honor his legacy by continuing on this march towards justice and meaningful change. We have a lot of work ahead.”

Some local activists, including Blanding, who criticized the state Marcus Alert bill as “watered down,” have said more changes are needed.

Chelsea Higgs Wise, a local organizer and host of the radio show and podcast “Race Capitol,” said the verdicts show that police accountability is possible. “But are we only striving for accountability or are we trying to save lives?” she asked.

To that end, she said she will continue pushing to shrink the size and scope of policing in Virginia.

Stoney last summer convened a task force including activists and local officials to “reimagine” local policing. In a speech this year, the mayor said the police department has implemented some of its recommendations, changing how police officers are trained and leading to the creation of a new police accountability office.

In a statement, Stoney said the verdict in the Chauvin trial “makes it clear to everyone in America that Black lives matter.”

“We all bear a responsibility to change and hold accountable the unjust systems that have harmed Black Americans,” he said. “I stand with all Richmonders in our commitment to do the hard work ahead and realize a better day in our city, commonwealth and country.”

In addition to the removal of the monuments, Richmond and other localities around Virginia changed the names of roads and streets such as Confederate Avenue and Jefferson Davis Highway. In Hanover County, outside of the city, school officials changed the names of Lee-Davis High School and Stonewall Jackson Middle School after years of debate over the names.

“The whole nation was focused on the injustice. ... It showed the inequities in our communities,” Virginia NAACP President Robert Barnette said of Floyd’s murder and the social changes it wrought. “Very seldom are police officers convicted and held accountable for bad behavior. This [case] will go down in history as indicating that our justice system works.”

As the evening faded Tuesday, Bee the Gardener, who continues to keep vigil at Marcus-David Peters Circle, heard a radio emit the verdict again. It wasn’t lost on Bee how many families in Richmond haven’t heard the same words after losing someone to police violence.

In between dancing to the “Ghostbusters” theme song, Bee mused on whether the guilty verdict for Chauvin would push more people to fight to make their communities better — to show up.

Either way, he said, the work continues.

Bee The Gardner makes his way through Lee circle following the verdict in the case of the death of George Floyd on Tuesday, April 20, 2021 at R. E. Lee monument in Richmond, Virginia.

A man with a “Say Their Names” sign rode past the Robert E. Lee statue on Richmond’s Monument Avenue on Tuesday after the guilty verdict.

Renee Hill embraced Bee the Gardener at the Robert E. Lee monument on Tuesday after a jury convicted a former Minneapolis officer of murder in George Floyd’s death.