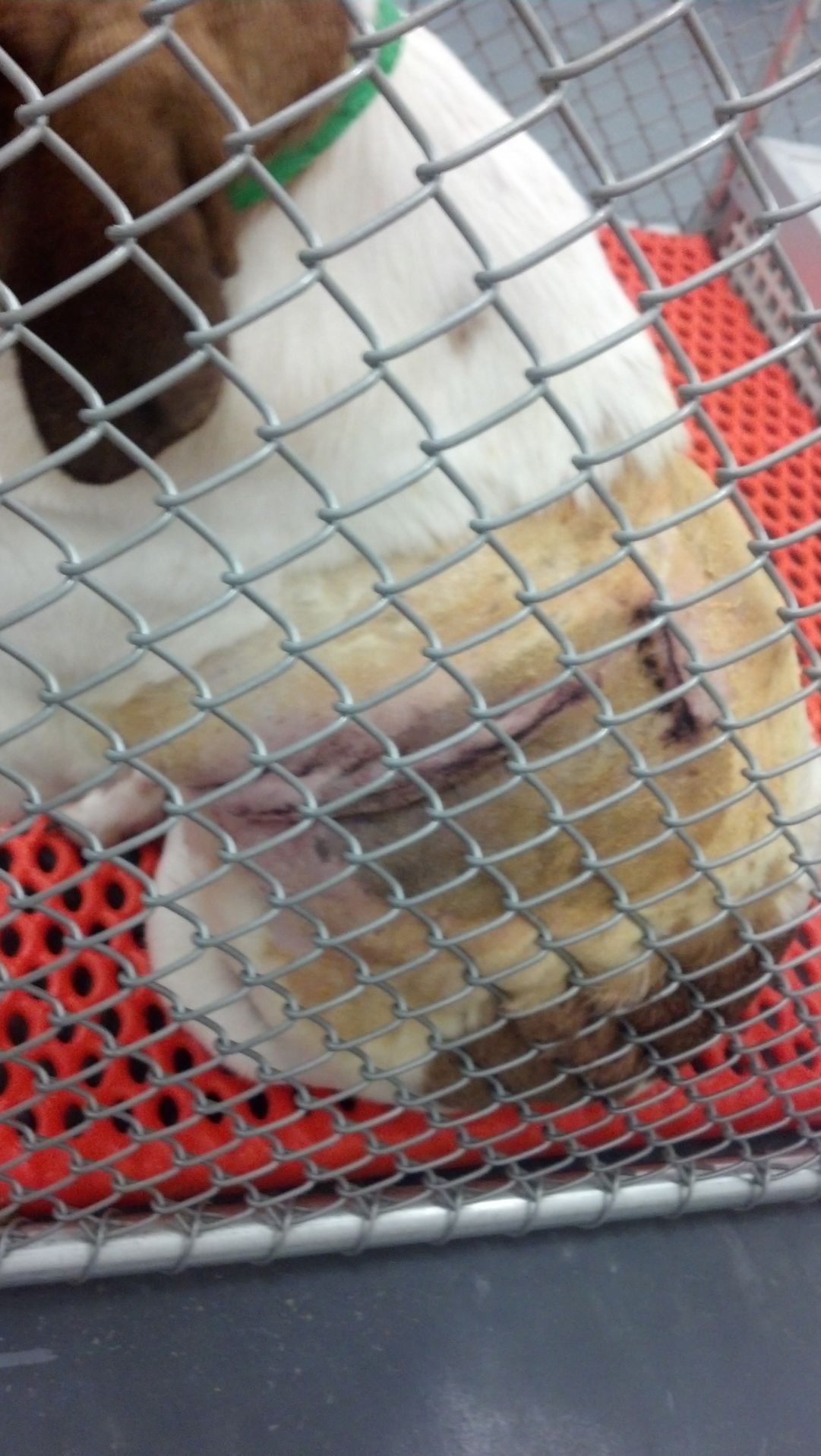 A whistleblower within McGuire Veterans Affairs Medical Center took photos of dogs used in controversial research and submitted them to the Washington-based watchdog group White Coat Waste Project. This image shows visible lacerations on a dog kept at the facility. 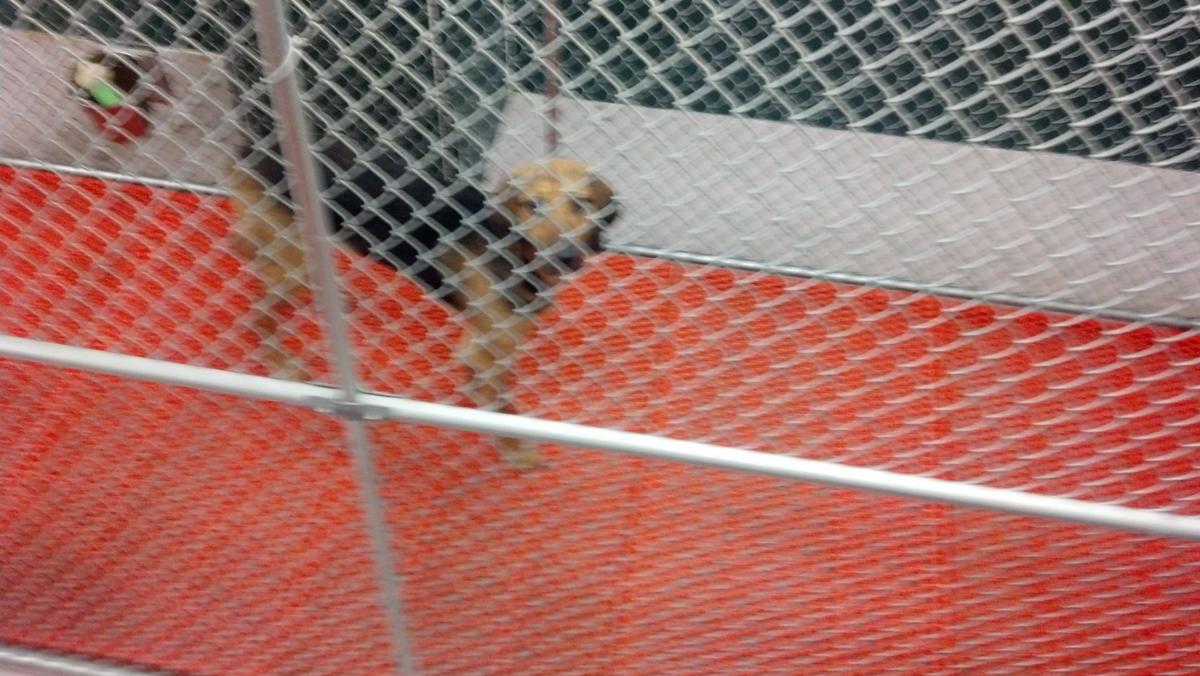 A whistleblower within the McGuire Veterans Affairs Medical Center took photos of the dogs used in for its research and submitted them to the watchdog group White Coat Waste Project.

Researchers at the Hunter Holmes McGuire VA Medical Center in Richmond have induced heart attacks in dogs, surgically implanted pacemakers into them and trained them to run on treadmills, all in the name of studying heart health in humans.

Some of the experiments are known to inflict severe pain in the dogs and puppies — some are as young as 6 months — while withholding pain relief.

The experiments are, “abusive and wasteful,” and derive some of their funding from taxpayer dollars, according to a letter sent by state Sens. William M. Stanley Jr., R-Franklin County, and Glen H. Sturtevant Jr., R-Richmond, to Gov. Terry McAuliffe’s office.

At least $99,970 went toward the experiments through a state grant that was awarded to the project’s principle investigator, the letter states. Another $50,000 grant went toward the research from Virginia Commonwealth University.

“Both grants cover a period during which numerous violations were documented,” the letter states.

The letter also asks whether the state was informed of “violations” relating to the experiments, some of which were outlined in a report by the VA Office of Research Oversight.

A public backlash has grown around the experiments since details came to light through lawsuits and Freedom of Information Act requests filed by the White Coat Waste Project, a Washington, D.C.-based watchdog group with a goal of ending taxpayer-funded animal experiments.

“We filed (FOIA) requests to get more details about the current projects happening at the Richmond VA, and discovered through those requests that Richmond is the only federal facility in the country that is conducting so-called maximum pain experiments on dogs, in which significant pain is induced and is intentionally not relieved,” said Justin Goodman, the group’s vice president of advocacy and public policy.

Some of the FOIA documents the group received indicated that experiments were still going on as of January.

The watchdog group submitted a complaint to the VA Office of Inspector General that was referred to the Office of Research Oversight, which released a report on the experiments.

The goal of the experiments, according to the report, was to study cardiac health — particularly regarding what can lead to heart abnormalities. It justified the use of dogs due to the similarities in size and physiology between dog and human hearts.

The report outlined instances of noncompliance relating to documentation and incomplete records of the dogs receiving appropriate veterinary care. In some cases, the report confirmed, mistakes made during surgeries resulted in the death of at least four dogs.

The primary investigator on the project, Dr. Alex Tan, was barred from working with animals. He remains in his position as a cardiologist at the McGuire VA. He did not respond to a request for comment.

A VCU spokesman said in a statement that although the university awarded a one-time $50,000 grant to Tan for the research, it did not oversee the care and use of the animals involved.

The U.S. Department of Agriculture has four classifications for animals involved in research. Some classifications state that the experiments cause no or very little pain, while the highest classification refers to experiments in which the animals are subjected to pain without relief. Some of the dogs used for the VA’s experiments, Goodman said, were in this latter classification, according to the documents the watchdog group received through its FOIA requests.

Dr. Michael Fallon, chief veterinary medical officer with the VA, said in a statement that the Office of Research Oversight did not deem the experiments deficient or find that the investigators did not provide adequate veterinary care, but rather found areas when veterinary care was not documented appropriately.

“ORO did not find any evidence that these deficiencies reflected any negligence, incompetence, recklessness or intentional misrepresentation,” Fallon said. He added that the deaths were related to the risks associated with any complicated and difficult surgery.

“To eliminate these deficiencies, Richmond VAMC amended the protocols to make the risks more explicit, with increasingly stringent training requirements and supervision by the Attending Veterinarian, and ultimately by replacement of the surgeon on the protocols,” he said.

Fallon said the VA’s animal research program “has saved lives in the past.” He said dogs are needed for experiments on hearts not only because dogs’ hearts are more similar to humans than animals like mice or rats, but because dogs are easier to train for “light treadmill activity needed for some of the studies, and they enjoy it, in contrast to pigs and other large animals.”

Research on canines has led to various medical advances, he said, including successful human liver transplants and the understanding that smoking increases the risk of lung cancer.

He also noted that studies involving dogs and other large animals are rare, since the VA typically uses mice or rats. “Canines accounted for fewer than 0.05 percent of animals used in VA research in 2016.”

Stanley, the state senator, said he understands the reasoning behind the experiments, but that subjecting dogs to so much pain goes a step too far.

“Certainly we want to do what we can to help make our fellow citizens healthier, but not at this expense,” he said. “As human beings we are tasked with the responsibility for caring for those who cannot care for themselves in the canine community, and here we are abusing that trust that we have with companion animals.”

He said he plans to file legislation that will address the issue.

“One being that no (taxpayer) money can be used for such experiments where a companion animal — in a sense man’s best friend — is being inhumanely treated in the name of science,” he said.

Legislation introduced to the U.S. House of Representatives by Rep. Dave Brat, R-7th, that would strip funding for all painful dog experiments at the VA recently received unanimous support.

Starr said her organization has reached out to the McGuire VA to try and adopt some of the dogs they use for experiments, but to no avail.

“We have, over many generations, encouraged dogs to become our best friends and our lifetime companions, and I think most people think it is wrong to turn around and subject them to a life of being chopped up in a research facility to be followed by death,” Starr said. “We have made them into the trusting, loving companions that they are to us.”

A whistleblower within McGuire Veterans Affairs Medical Center took photos of dogs used in controversial research and submitted them to the Washington-based watchdog group White Coat Waste Project. This image shows visible lacerations on a dog kept at the facility.

A whistleblower within the McGuire Veterans Affairs Medical Center took photos of the dogs used in for its research and submitted them to the watchdog group White Coat Waste Project.