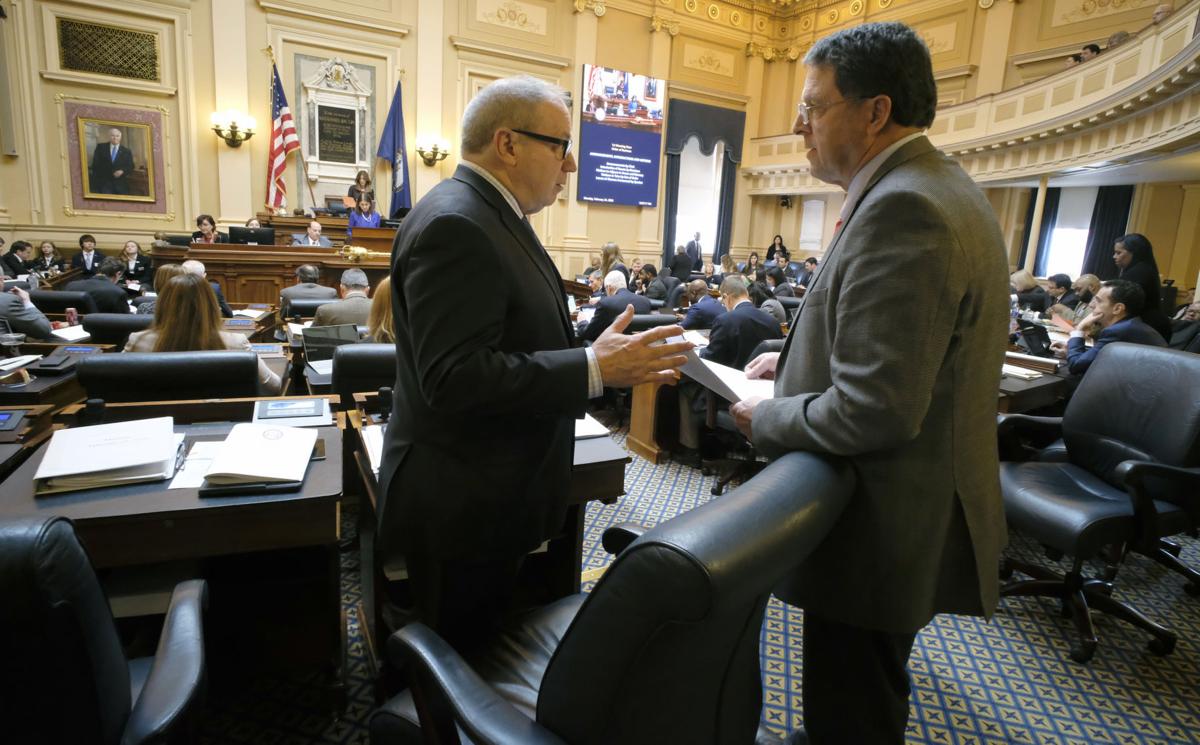 Del. Mark Sickles, D-Fairfax (left), talked with Del. Dave LaRock, R-Loudoun, on Feb. 24 during the House floor session inside the Capitol. LaRock has been lambasted for sharing false information. 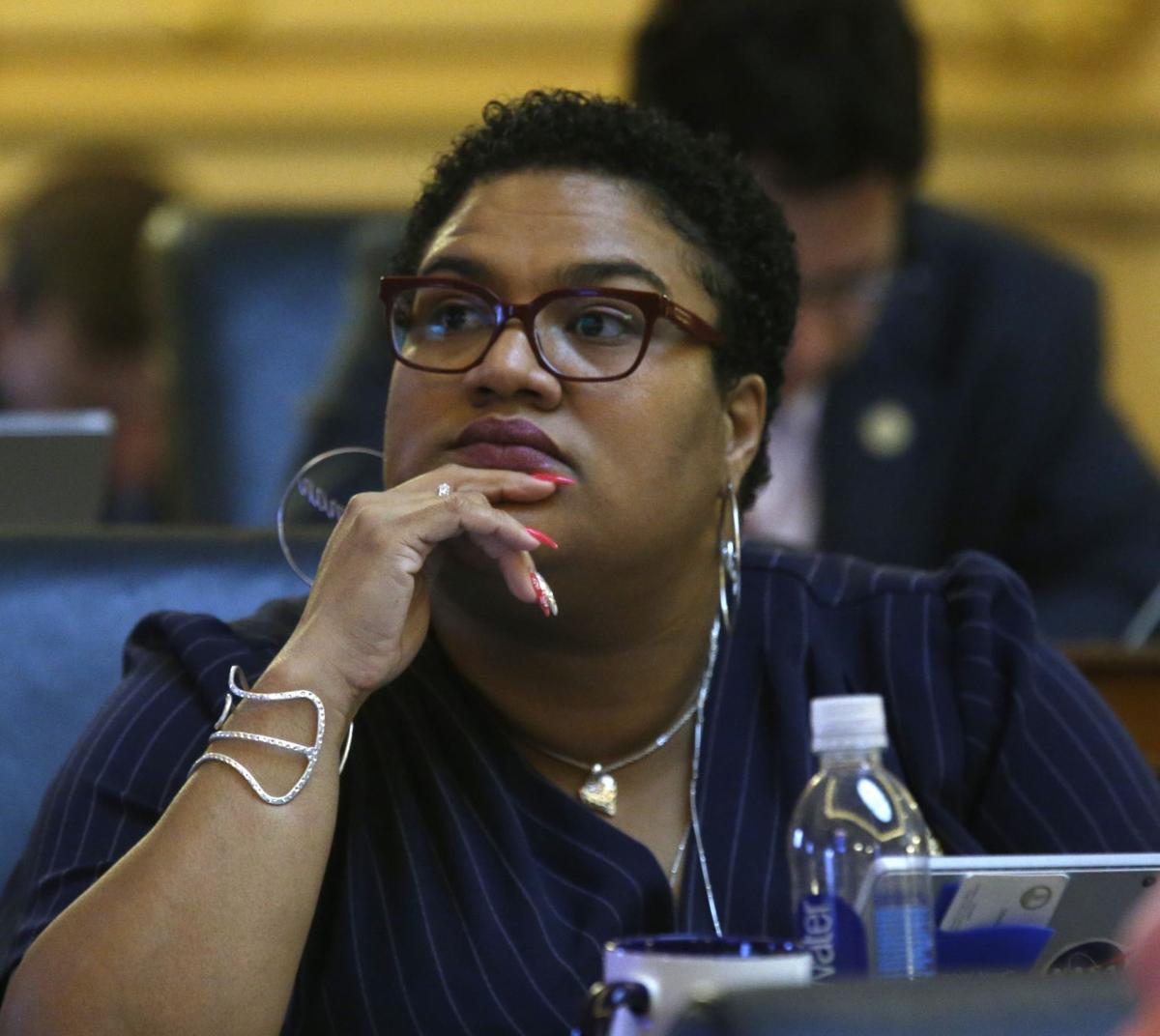 Del. Cia Price, D-Newport News, listens to debate during the floor session of the House of Delegates inside the State Capitol in Richmond, VA Wednesday, Feb. 26, 2020. She had a gun-related bill passed by the Senate earlier.

In August, Del. Dave LaRock, R-Loudoun, filed a resolution endorsing hydroxychloroquine as a treatment for COVID-19 despite various clinical trials by national medical associations warning against its use and lack of efficacy.

On Thursday night, he warned a House Health committee that COVID vaccines rigorously tested and authorized by the Food and Drug Administration with a 94.1% efficacy rate against the virus couldn’t be trusted.

“There’s legitimate vaccine hesitancy in communities that the gentleman listed, but actual and factual information is key, not fanning the flames that are based on historic events,” Price said, referring to ongoing discriminatory practices in medical care.

In a later tweet, Price wrote that misinformation from a public official is “irresponsible.”

This occurred in the leadup to the Democratic-controlled committee voting on LaRock’s House Bill 2242, which proposed protecting Virginians against being punished for refusing the vaccine and prohibiting the inclusion of information into the state tracking system without informed written consent.

“Just a second, no one’s going to discriminate against you if you don’t take the vaccine. Let’s make that clear. We don’t have enough vaccines for people who want it,” said committee Chair Del. Mark Sickles, D-Fairfax. “Most Republicans don’t want us to put extra words in the code that are not necessary.”

There’s currently no requirement to receive the COVID-19 vaccine, and state and health officials have repeatedly said there will be no mandate.

The bill was immediately tabled in a 18-3 vote, with only Republicans voting against the decision to do so.

In a statement Friday, LaRock said, “I regret that the legislature denied protection from discriminatory actions to those who make a personal medical decision not to be vaccinated.”

The Loudoun official has described himself as pro-life and a “constitutional conservative.”

This isn’t the first time in the last month that LaRock has been lambasted for sharing false information. Two weeks ago, House Speaker Eileen Filler-Corn stripped the lawmaker from key committee assignments following his support of overturning the election’s results and his baseless claims of voter fraud.

On Jan. 19, the Loudoun Board of Supervisors passed a resolution calling on LaRock to resign after his role in the insurrection at the U.S. Capitol on Jan. 6. The Winchester NAACP followed shortly after.

In a letter posted to his site, LaRock called it a “witch hunt” to punish “the patriotic motives of people” who support former President Donald Trump. While he condemned the Capitol attack in a statement, he also reiterated unfounded claims of election fraud.

Earlier this month, LaRock told The Winchester Star that Thomas Caldwell — a Virginia native who on Wednesday was indicted on federal conspiracy charges for attacking the Capitol — “is a wonderful man” he thinks highly of.

In a criminal complaint, the FBI recites a message sent to Caldwell that read, “All members are in the tunnels under the capital. Seal them in turn on gas.”

LaRock said Friday that he was “shocked to hear Mr. Caldwell is being charged with these very serious crimes.”

On Thursday night, before the House committee took a final vote, Del. Mark Levine, D-Alexandria, mentioned the damage that could have occurred without the polio or smallpox vaccine and added “this is a terrible bill.”

LaRock unmuted his mic to respond.

“Mr. Chairman, may I have the last word?” LaRock asked.

Sickles did not hesitate.

Del. Mark Sickles, D-Fairfax (left), talked with Del. Dave LaRock, R-Loudoun, on Feb. 24 during the House floor session inside the Capitol. LaRock has been lambasted for sharing false information.

Del. Cia Price, D-Newport News, listens to debate during the floor session of the House of Delegates inside the State Capitol in Richmond, VA Wednesday, Feb. 26, 2020. She had a gun-related bill passed by the Senate earlier.