Subscribe
Read Today's E-Edition
Share This
The cottage of the 'Father of Jackson Ward' was uprooted by an interstate highway. The JXN Project is planning a homecoming for Abraham Skipwith.
0 Comments
Share this 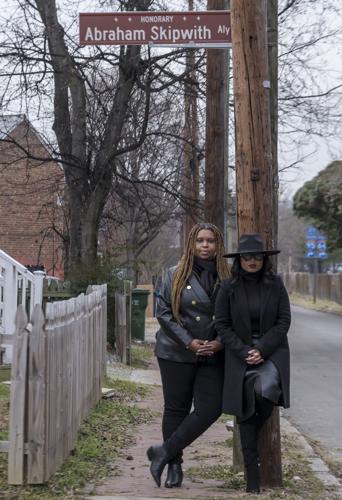 Enjoli Moon and Sesha Joi Moon are co-creators of The JXN Project, which has launched a $5.68 million capital campaign to build a replica Skipwith cottage in Jackson Ward. 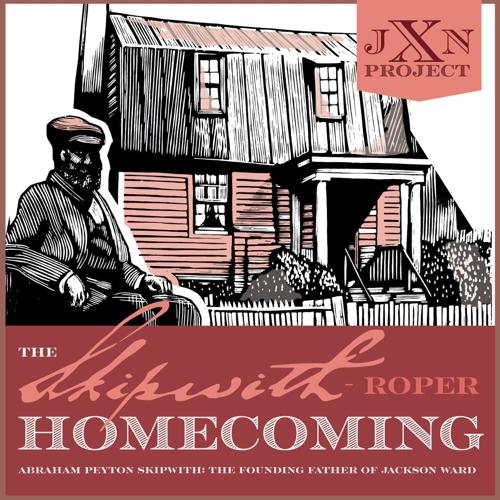 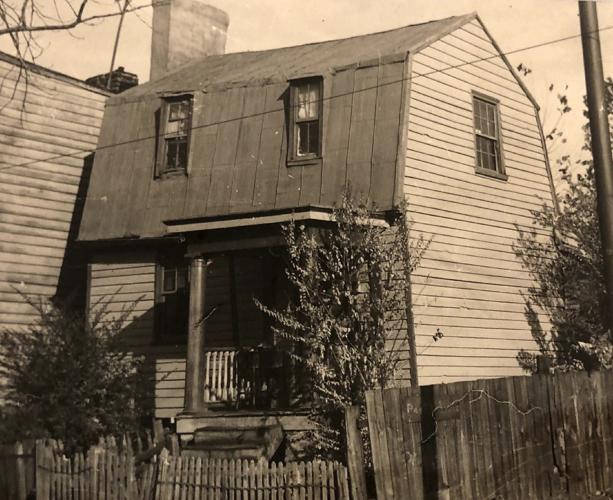 The gambrel-roofed Skipwith-Roper Cottage as seen when it was at 400 W. Duval St. in Richmond. 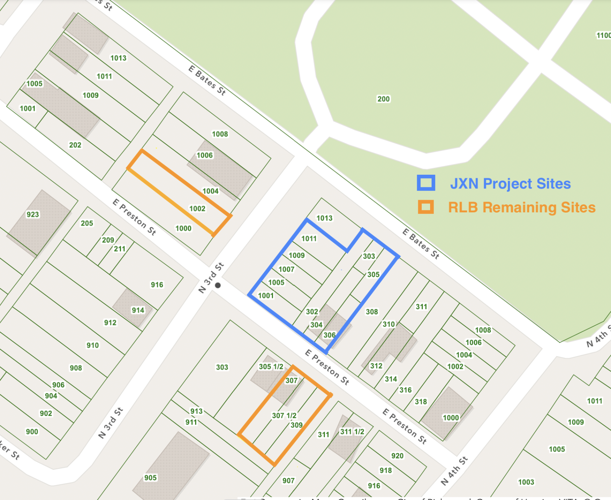 The blue area represents the land in Jackson Ward that would be transferred to The JXN Project for its plan to rebuild the Skipwith-Roper Cottage. 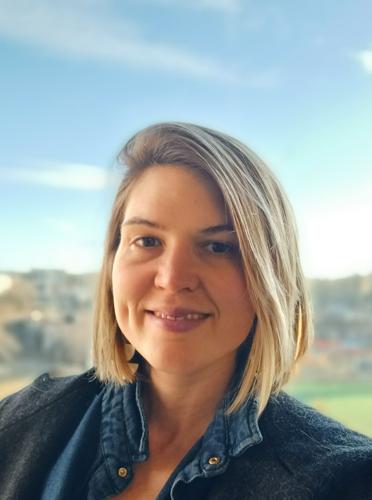 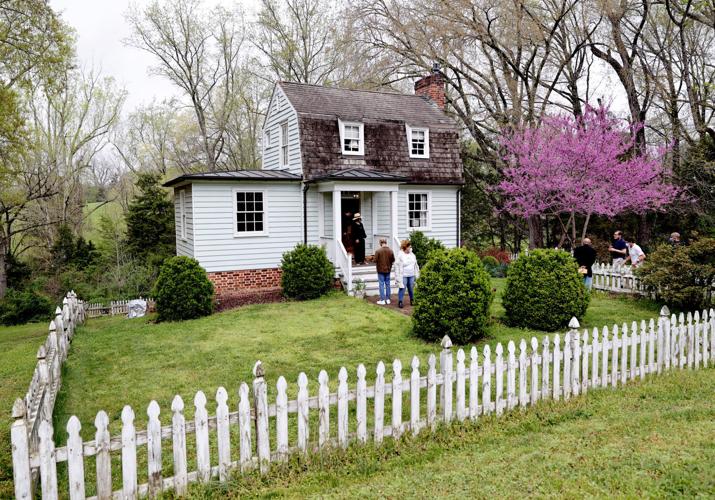 Abraham Peyton Skipwith, who in February 1793 became the first known Black property owner in what would become Jackson Ward, built this cottage that was reassembled and moved to Goochland County.

The life of Abraham Peyton Skipwith, a hidden figure in Virginia history, embodies the possibilities of Black people in America from the 18th century through today.

As a man in bondage in Williamsburg, Skipwith had powerful people willing to vouch for him in his 1785 legislative petition for freedom, including Benjamin Harrison V, a former colonial Virginia governor and signer of the Declaration of Independence, and Jacquelin Ambler, a member of the Council of State under then-Virginia Gov. Thomas Jefferson.

Skipwith states in his petition that “he was rather regarded as a Clerk and assistant than in the unfortunate character of a slave” by his late owner, Thomas Bentley.

Skipwith ultimately purchased his own freedom and manumitted his wife, Cloe, and granddaughter, Maria Skipwith. In February 1793, he became the first known Black property owner in what would become Jackson Ward. He built a gambrel-roofed cottage at 400 W. Duval St., owned a silver watch and silver knee buckles, and likely carried supplies in his horse-driven cart.

And before his death, he performed an act that was rare if not unheard of for a Black man of his times in Richmond: He executed a will to keep his property in his family’s hands “forever.”

This history is being uncovered through the research of The JXN Project, a reparative historic preservation nonprofit. At the heart of Skipwith’s life and legacy “lay the blueprint for the very complicated notion of the Black American dream,” says Sesha Joi Moon, co-creator of The JXN Project with her sister, Enjoli Moon.

The Skipwith-Roper family retained ownership of the cottage until 1905. The dwelling, in the path of what would become Interstate 95, was condemned in the late 1950s and slated for demolition. A co-founder of the Historic Richmond Foundation moved the cottage to Goochland County, and today it sits on the site of a former plantation. Its renovation stripped the house of its historical integrity in the estimation of the Moon sisters, who originally hoped to bring it back to Richmond.

Instead, they are seeking to become the architects of a homecoming “to make certain that Skipwith can rest in peaceful power.”

A week ago, The JXN Project launched a $5.68 million capital campaign to build a replica Skipwith cottage in Jackson Ward as an interpretative historic space not unlike the Maggie L. Walker National Historic Site in Jackson Ward.

Meanwhile, the Richmond Land Bank of the Maggie L. Walker Community Land Trust has committed to transfer 10 of its parcels in Jackson Ward to The JXN Project to create a cultural heritage site that would include the rebuilt Skipwith-Roper cottage, office space and a green space for outdoor community programs.

The next steps are to work with The JXN Project to develop a site plan, continue speaking with neighbors and residents in the area, and to finalize development agreements for the site at North Third and Preston streets, says Julia MacNelly, program director for the land trust.

Jackson Ward was established in 1871 by former Confederates to counter African American political gains during Reconstruction. But this attempt to gerrymander Richmond’s Black residents into political impotence had an unintended effect: It created a powerful incubator of Black entrepreneurship.

Construction on what was then the Richmond-Petersburg Turnpike decimated Jackson Ward, which fell into decay and decline. Today, Jackson Ward is a gentrifying community struggling to maintain connections to its past glory as a “Black Wall Street” and “Harlem of the South.”

The Moon sisters regard Skipwith as “the Founding Father of Jackson Ward,” and say his home deserves to be held “with the same reverence that is bestowed upon this country’s more traditionally recognized forefathers.”

Skipwith presents an opportunity “to shift the national gaze from the city’s dismantled [Monument] avenue” to “the alley on which [Skipwith] built a monument in his own right as Jackson Ward’s first known Black homeowner in 1793.”

As part of that objective, Sesha Joi Moon briefed Transportation Secretary Pete Buttigieg during his tour of Jackson Ward in December on the intent to pay homage to Skipwith. Her message: Any effort to reconnect neighborhoods like Jackson Ward must begin with acknowledging and atoning for historic injustice.

In 2019, the Maggie L. Walker Community Land Trust was established to use vacant and tax-delinquent parcels “to develop and steward permanently affordable housing opportunities to foster racially equitable communities.” A stated mission of the Land Trust is to repurpose its properties “into assets that address community needs and desires.”

The Land Trust conducted a survey of neighborhood residents and stakeholders, “and one of the things that really came up in that study was preserving and uplifting history,” MacNelly said.

The reason that the tracts that would be conveyed to The JXN Project have been vacant for so long “is pretty directly related to racist practices that were common throughout the United States,” she said, adding that it’s particularly important “for the future of those lots, to kind of draw upon that in a healing way. And I think The JXN Project absolutely does that.”

Beyond systemic barriers stemming from credit, lending and income, “One thing that we hear a lot ... is that a lot of households of color aren’t even given the narrative of homeownership as something that’s available to them,” she said.

Too often, Black families don’t believe that homeownership is within their reach.

“And so I think that this project is really important for that reason — because it shows that Black households in particular and households of color have been homeowners in Richmond even against all odds, for centuries,” MacNelly said. “So I think it’s really inspiring on that level as well.”

The Moon sisters find inspiration in the life of Skipwith, whom they say “challenges the one-dimensional enslaved narratives we’ve been told our entire lives.”

Gregg Kimball, director of public services and outreach at the Library of Virginia, sees Skipwith as an example of “the perseverance of the human spirit. I can’t even imagine someone doing this in his time frame, and yet he does.”

“People like him who were emancipated and then became free people of color in the slave society, in this netherworld between freedom and enslavement, and the trials and things they go through reflect that,” said Kimball, noting that Skipwith aspires to free enslaved relatives in his will. “This line between freedom and enslavement is so thin. And being connected to these really powerful white people is a way a lot of people got emancipated.”

He sees the influence of Ambler, a former state treasurer, in the way Skipwith attempts to use his knowledge of how money works to lift up his still-enslaved relatives. “He saw how these things worked, up close and personal.”

And from these seeds sprang Black entrepreneurship. “People in these really extreme circumstances learned how to do these things and support themselves. I think there’s a continuum between Maggie Walker and people who do that today.”

The Jackson Ward story is not a singular one.

African American prosperity in the aftermath of the Civil War came under violent physical assault in such cities as Wilmington, N.C., where a biracial government was overthrown by an 1898 coup by white supremacists, and the Greenwood neighborhood of Tulsa, Okla., site of a 1921 race massacre.

In mid-20th-century Richmond, the weapon of choice against Jackson Ward was not armed insurrection or bombs from above, but public policy that placed a historic neighborhood in the crosshairs of highway construction.

“When you think of the amount of economic value that was destroyed in real time by that one aspect of public policy, you begin to understand what we mean by the lack of access to capital,” said Marland Buckner, interim director of the Black History Museum & Cultural Center of Virginia.

The JXN Project on Skipwith “represents an expansion of the aperture in particular regarding ways we think about the arc of capital formation in Black Richmond and the Black community — the way that process has been interrupted largely by public policy including but not limited to bulldozing and other forms of destruction,” Buckner said.

What’s really exciting right now is framing these conversations “in a forward-looking, optimistic context” where we are using this hidden history “to inform our public policy conversations today,” he said. “Not for the sake of retribution, but so we can more clearly understand how much social and economic value has been destroyed, so we can capture the upside moving forward.”

The Moon sisters plan to complete the project by 2026, in time for this nation’s 250th anniversary. For them, the cottage would be a homecoming not just for Skipwith, but for the multitudes of Black Americans who can trace their American roots to Virginia.

It’s important “to excavate, elevate and educate others on a hidden figure like Skipwith,” they say, “because his fortified shoulders helped to define what it means to be Black and American.”

The cottage was originally built by Abraham Skipwith, a freedman who is the first known Black property owner, residing in what would become Jackson Ward.

The cottage was originally built by Abraham Skipwith, a freedman who is the first known Black property owner, residing in what would become Ja…

This adorable toddler chef cooks for millions on social media

This adorable toddler chef cooks for millions on social media

Enjoli Moon and Sesha Joi Moon are co-creators of The JXN Project, which has launched a $5.68 million capital campaign to build a replica Skipwith cottage in Jackson Ward.

The gambrel-roofed Skipwith-Roper Cottage as seen when it was at 400 W. Duval St. in Richmond.

The blue area represents the land in Jackson Ward that would be transferred to The JXN Project for its plan to rebuild the Skipwith-Roper Cottage.

Abraham Peyton Skipwith, who in February 1793 became the first known Black property owner in what would become Jackson Ward, built this cottage that was reassembled and moved to Goochland County. 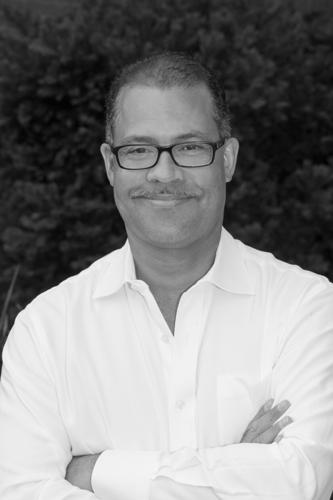