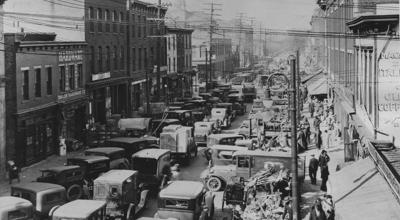 After all, former Confederates in city government created the Ward to stymie the ambitions of Black people by concentrating them in one of Richmond’s six political boundaries.

That intent had unintended consequences: Freedmen and the formerly enslaved created the birthplace of Black capitalism in the U.S., a place buzzing with banks, newspapers, theaters, clubs, restaurants and other businesses.

The prosperity didn’t last. White decision-makers planted a public housing project in the Ward. They ran a highway through it. Subsequent city governments eroded its integrity with municipal projects and otherwise shrank its boundaries. Desegregation further depopulated it.

Today, Jackson Ward, a National Historic Landmark District since 1978, is undergoing a resurgence whose gentrifying forces threaten to undermine or obscure its Black heritage.

The JXN Project was co-created by Enjoli Moon and Dr. Sesha Joi Pritchett-Moon to celebrate the Ward’s anniversary, properly contextualize its origin story, and leverage historic preservation “through restorative truth-telling and redemptive storytelling in order to excavate, elevate, and educate.”

This special project is a collaboration between The JXN Project and the Richmond Times-Dispatch.

The 'incubator of Black capitalism' in the U.S. began with a Jackson Ward cottage

During a time when a Black man in Richmond was more likely to be treated as property than possess it, Abraham Skipwith committed a revolutionary act: He owned a home.

The Jackson Ward of Annie Blount’s childhood is no more.

The Hughes House embodies the spirit of historic Jackson Ward, and stands as a beacon of hope for its future

The Hughes family peers through time in a 1924 photograph, poised on the steps of their stately Jackson Ward residence at 508 St. James Street.

VIDEO: Jackson Ward, Then and Now

Historic scenes in Jackson Ward are contrasted with what the present landscape looks like in Richmond, Va. The district was a thriving African…

INTERACTIVE: Before and after photographs of Jackson Ward landmarks

PHOTOS: Jackson Ward - Then and Now