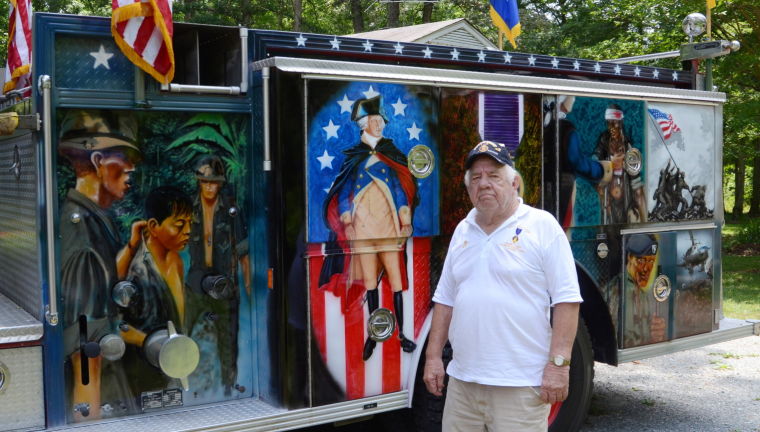 Army and Marine veteran and Purple Heart recipient Herbert Delbridge converted a 1983 Ford firetruck into a rolling recognition for Vietnam veterans. The truck, converted over four and a half months, was painted by Mechanicsville artist Ken Hayden. 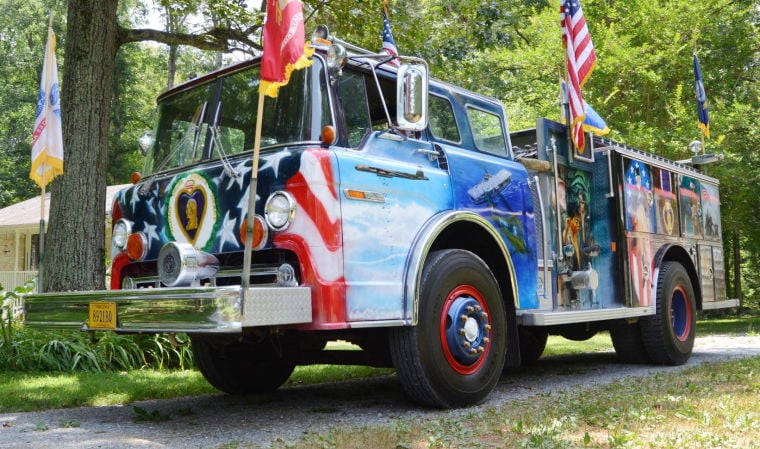 The Purple Heart Truck honors every branch of the armed forces. Delbridge says he will devote the rest of his life to driving it.

Firetrucks were built to be noticed. They’re big. They’re loud. And for Herbert Delbridge, they’re the perfect platform for honoring Vietnam veterans.

Delbridge, 73, a Rockville resident, has been frustrated with the public’s treatment of Vietnam veterans for more than 40 years.

“It was terrible,” he said, sitting in a folding chair in his front lawn. “And still to this day, it makes me feel bad about what happened — our welcome home Vietnam vets never got.”

But times are about to change.

After riding in a parade with the Military Order Purple Heart Chapter 1965, the Army and Marines veteran devised a plan to display the war’s untold stories loud and proud on the flanks of a firetruck.

“That was the day right then that we decided,” the Purple Heart recipient said.

Close to a week later, Delbridge stumbled upon a 1983 Ford Diesel firetruck for sale at a service station.

“I pulled in and that’s when I saw this baby,” he said. As he spoke, his steel blue eyes shifted to the multi-color machine basking in his gravel driveway.

With the finances sorted out and his Purple Heart chapter on board, Delbridge contacted Mechanicsville airbrush artist and automotive painter Ken Hayden.

For more than four months, Hayden and Delbridge worked side by side transforming the truck into a rolling memorial.

Constantly referencing newspaper clippings, historical documents and old photographs, the pair made sure each branch of the armed forces was represented.

Spanning across the entire truck, the patriotic paint job blends images of George Washington — the creator of the Purple Heart in 1782 – and battle scenes from the Vietnam War.

As Hayden painted, he noticed that the Ford’s sheet metal wasn’t the only thing changing.

“(Delbridge) was private when he started but opened up as we got along,” Hayden said.

This was just part of Delbridge’s plan for the Purple Heart Truck.

One of the goals of the project is to help veterans talk about their experiences fighting overseas. He said they seldom share their memories, but he looks forward to seeing their reactions when they see the truck in parades.

“We promised that we would not let them be treated like we did,” Delbridge said. “When they come home, we try and give them something, some kind of recognition for doing their job.”

Delbridge’s wife, Linda, said the truck consumed him for more than a year of the couple’s 49-year marriage.

“I am absolutely overwhelmed with pride with the thing,” she said. “He planned it; it’s all his concept, then giving the artist a little bit of license with it, which really turned out well. He knew his thoughts well. I’m very, very proud of it and proud of him.”

With the paintwork finished in April, Herbert Delbridge is now firing up the Purple Heart Truck chapter of his life.

“So I’ve committed myself to this,” he said. “The rest of my life all I’ll do is ride this baby around just for any vets to ride in parades and things, just give them a few minutes of glory they just enjoy.”

Interested in an appearance by the Purple Heart Truck?

To request an appearance for a public event, call (804) 749-3751, email HSDelbridge@hotmail.com or log onto the website at PurpleHeartFiretruck.com

Last week, Danielle Jones went to get a personal loan with a 36% to 40% interest rate from Check City on West Broad Street in Richmond. It’s t…

Around 100 small-business owners from Virginia joined Sen. Joe Morrissey, D-Richmond, for a news conference Monday to highlight the negative i…

Army and Marine veteran and Purple Heart recipient Herbert Delbridge converted a 1983 Ford firetruck into a rolling recognition for Vietnam veterans. The truck, converted over four and a half months, was painted by Mechanicsville artist Ken Hayden.

The Purple Heart Truck honors every branch of the armed forces. Delbridge says he will devote the rest of his life to driving it.