'There was nothing else to do': Alcohol use and sales on the rise in Virginia during the pandemic, especially among women
0 Comments
Share this
1 of 5 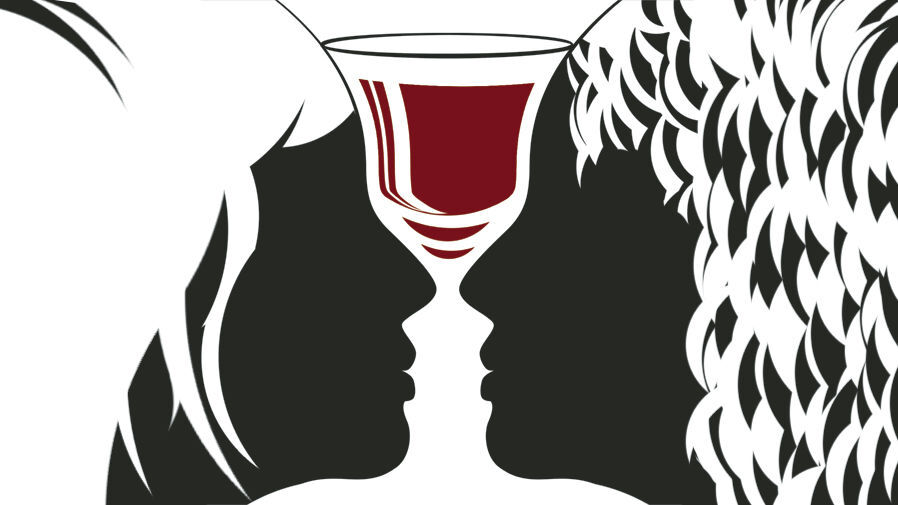 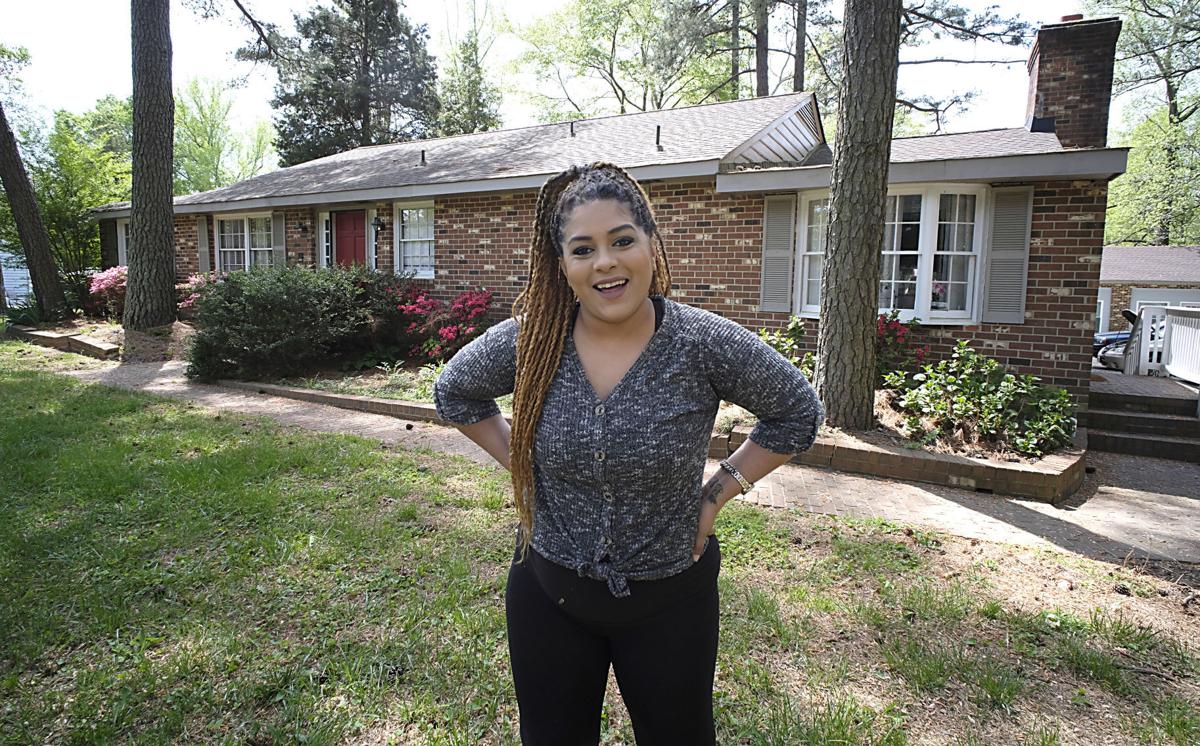 Monique, 27, had always been a social drinker, but after the pandemic started and she was furloughed from her job, her drinking spiked. She turned to the McShin Foundation, completed 30 days of sobriety and has committed to 60 more days of sober living. 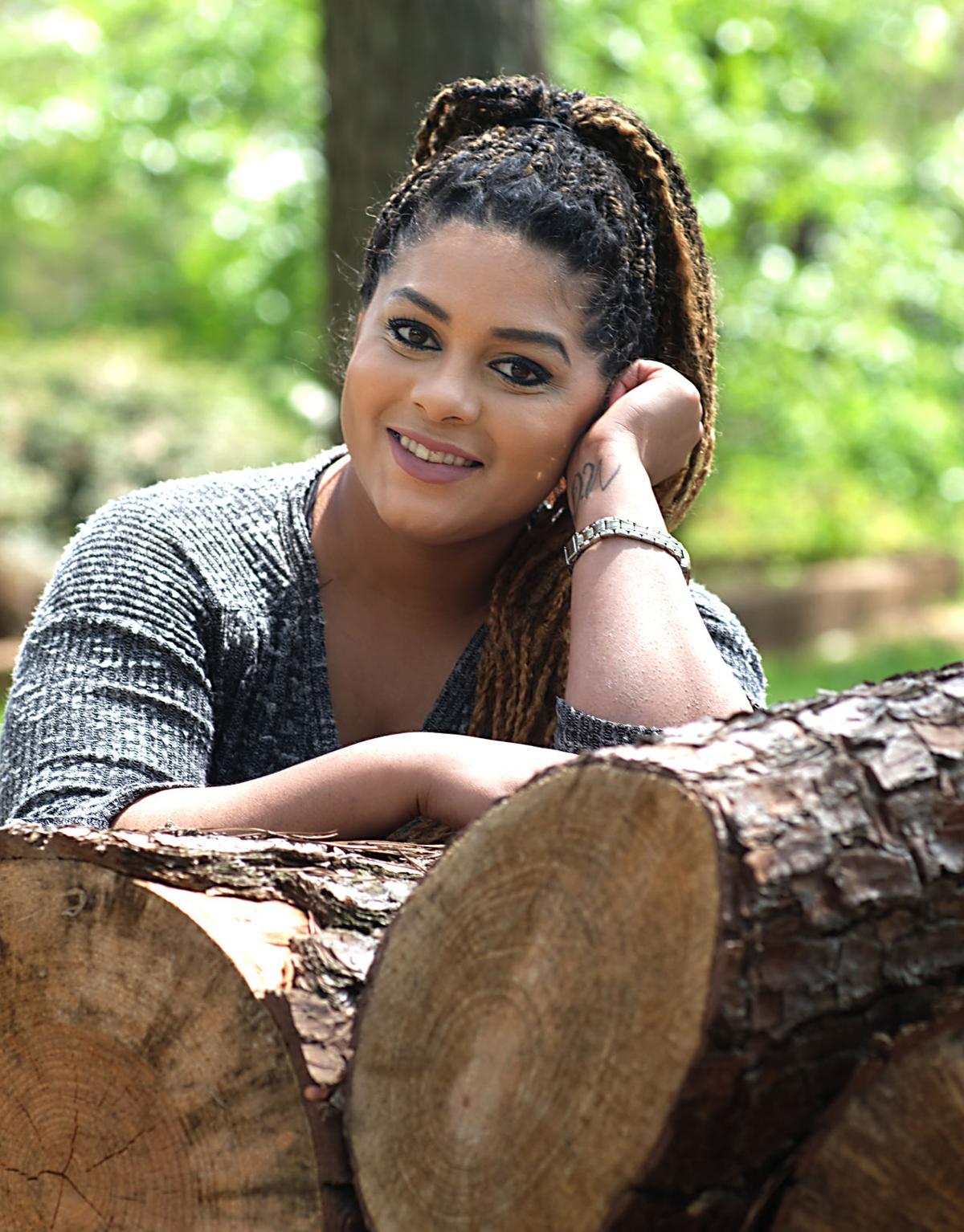 Monique, 27 (28 next month), who is currently in recovery with the McShin Foundation and has completed an intensive 28 day program and committed to another 60 days with the program, poses for photos outside the Foundation home in Chester, VA Friday, April 23, 2021. 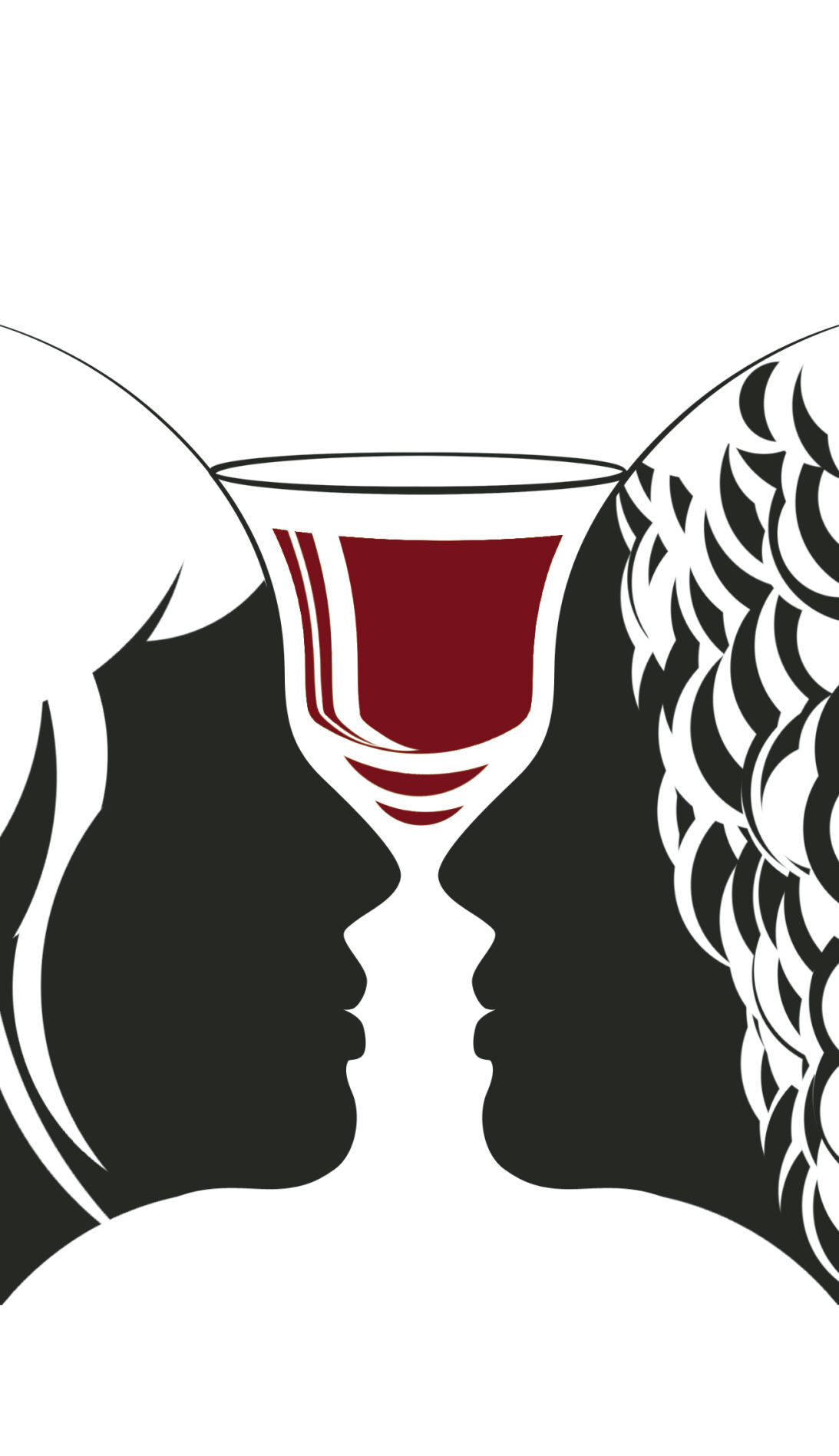 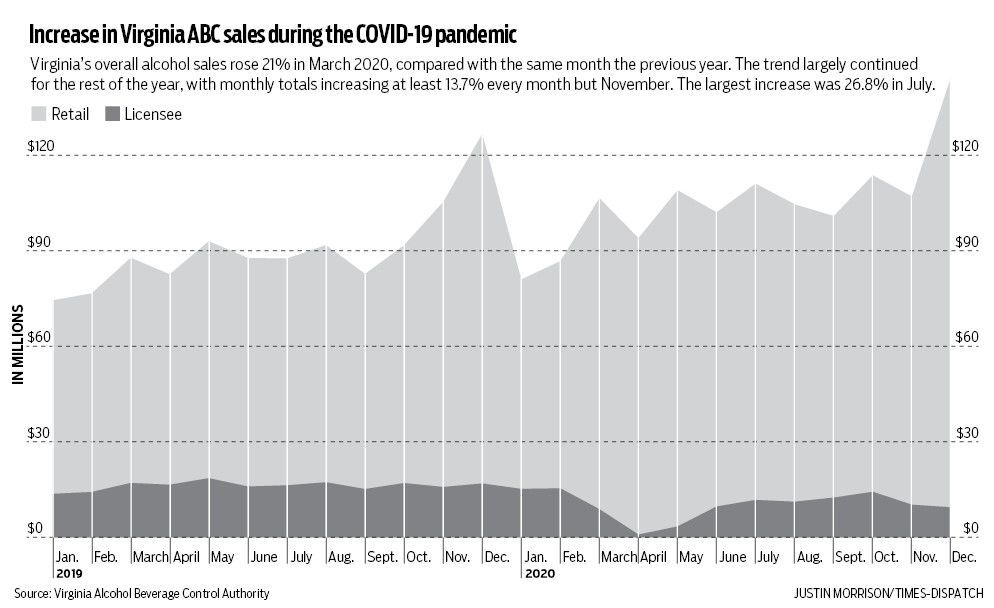 Editor’s note: Some names in this story have been changed to protect the personal health information of the women who shared their experiences.

In the beginning of the pandemic, Jill, 40, told herself that pouring a glass of wine would help her cope with the anxiety and stress of lockdown.

She’d be watching “Paw Patrol” with her three young kids for the hundredth time and have a glass of wine to cut through the boredom. Then she’d have another with her husband before dinner. Then there were Zoom happy hours, some of the only times she’d see her best friends, where she started getting creative with mixed drinks.

Then it got to the point where it would be 2 p.m. on a play date with her Henrico County neighbors when one of them would say, “Let’s sit outside and have a drink.”

“There was nothing else to do,” Jill said. “It was like, ‘Why not?’ It was one of the few ways you could remain social without completely alienating yourself from everything.”

Drinking is on the rise across the nation due to the pandemic. Alcohol consumption among adults increased by 14% from 2019 to 2020, according to a recent study published in JAMA Network Open. Women in particular reported a 41% increase in heavy drinking.

Overall, about 3 out of 4 Americans reported that they increased their drinking days by one day each month, according to the same study.

Alcohol abuse is more prevalent than misuse of opioids or any other substance. Alcohol misuse is one of the leading causes of preventable death, contributing annually to about 3 million deaths worldwide, according to the medical journal The Lancet.

In Virginia, alcohol sales started to increase more steeply once the pandemic took hold in March 2020. On lockdown, offices were closed, as well as restaurants, bars and schools. Virginia ABC stores were deemed essential retail services and stayed open.

Virginia’s overall alcohol sales rose 21% in March 2020, compared with the same month the previous year. The trend largely continued for the rest of the year, with monthly totals increasing at least 13.7% every month but November. The largest increase was 26.8% in July.

Kristin, 39, a small-business owner and mother of three young kids in Glen Allen, said the pandemic made her feel like a “caged animal.”

“It was monotonous being at home all the time, not being able to go anywhere. When I was at home, in the evenings, I wanted something to numb it all out,” she said. She noticed her drinking began increasing in the fall, when her kids were still in virtual school and there were no after-school sports.

“I’d pour a glass of wine while preparing at dinner at 4 p.m. That felt pretty good. Then I’d have another. And pretty soon, that would turn into four glasses of wine. Which is a whole bottle,” Kristin said. Her drinking became a habit, she said, from the fall of last year into this March when her kids finally went back to school in person.

“We were all drinking together,” Jill said of her Glen Allen neighborhood. She described afternoons and evenings where the neighbors would gather in the cul-de-sac with a few beers or Truly hard seltzers because there was nowhere to go and nothing else to do. “Everyone was drinking more,” she said.

Excessive alcohol use is a common response to coping with stress. It was reported after the terrorist attacks of Sept. 11 and Hurricane Katrina. The COVID-19 pandemic has increased many stressors: loneliness, isolation, economic hardship, death and fear.

“The uncertainty of the pandemic was overwhelming,” Jill said. “It was really scary that something could happen to anyone in your family. And people were walking around in hazmat suits. Drinking eases the worry a little bit.”

Women react differently to alcohol than men, according to Martin, of the Nelson Clinic.

Studies show women are more likely than men to experience emotional issues like anxiety, depression and post-traumatic stress disorder that can lead to alcohol use disorders. Some research also suggests that women are more vulnerable to psychological distress from the pandemic, due to the many new demands placed on them.

Consequently, women may be more motivated than men to drink to cope with pandemic-related distress.

“Women have different elements to face than men,” said Tara Lloyd, program manager for The Healing Place for Women, a recovery center that opened in December in South Richmond. “We have to do everything from working to raising a family to keeping the house running. So when we fall, it’s devastating.”

Kristin said she started having trouble sleeping on the days she would drink. She was lethargic and foggy-headed in the mornings. And there was the weight gain from the alcohol.

“I really started to beat myself up,” she said. That led to more drinking, trying to numb out the anxiety and stress.

When schools, businesses and especially after-school sports started to open back up, both Jill and Kristin said their drinking decreased and returned to normal levels.

For others, however, the drinking didn’t stop.

“This past year was so hard, it was so isolating,” said Monique, a 27-year-old who works in the food and drink industry. She moved back to Richmond from California to be closer to her parents in 2019, but when the pandemic hit, she couldn’t see them because they were at a higher risk of infection.

Monique had always been a social drinker, but after the pandemic started and she was furloughed from her job, her drinking spiked.

“I felt very alone. My biggest concern of the day was trying to get to the liquor store in Shockoe Bottom before it closed at 7 p.m.,” she said. “If I missed the cut-off, I’d order beer for delivery.”

Monique lived alone with her dog, a beloved pug named Yeye. “I didn’t really have anything else to do than sit by myself and drink.”

Almost twice as many people who are unemployed struggle with addiction than those who are full-time workers, according to the National Survey on Drug Use and Health.

In April, Monique woke up in the hospital after a fall in her apartment while intoxicated. She couldn’t remember what happened, but she had to get emergency head surgery that resulted in 12 inches of staples on her crown.

“I had no idea where I was or where my parents were,” she said.

To get home, she booked a Lyft. On the way, she had the driver swing by the ABC store.

“That was the start of the coronavirus for me. It was so, so lonely,” Monique said.

Substance use in women progresses more quickly to addiction, according to Martin’s research. Health care professionals tend to miss signs of addiction in women, especially in older women and younger girls. And depression can often exacerbate alcohol use.

As each month of the pandemic went by, Monique’s drinking increased. “I would drink a bottle of alcohol. Then a bottle and a half and feel nothing,” she said. “I wanted something to take the edge off.”

It got to the point where she had to drink 3 liters of alcohol a day, which translates to roughly 67 shots, just to function.

She would wake up in the middle of the night, covered in sweat, and take a few swigs of alcohol just to go back to sleep. When she woke up in the morning, she would be shaking, sick, and have to start drinking again just to feel normal.

“I was physically dependent on alcohol,” Monique said. She tried to stop drinking, but couldn’t. “I realized I couldn’t continue to live like this.”

Her dad, a pastor and a recovering alcoholic, had been talking about recovery with her for years. “You think you can manage your drinking, but you can’t,” he said.

On a Tuesday night in March of this year, she texted her dad: “I’m ready to change. I can’t handle this.”

Within an hour, he texted back that he had found her a bed with the McShin Foundation and that he would pick her up at 7:30 a.m. the next day.

In the morning, her dad took her to McShin, a recovery group in Virginia with 130 beds spread out among 12 recovery residences.

She has completed 30 days of sobriety and committed to 60 more days at a sober living house.

“It’s something that I need to do,” Monique said. “It will give me the stability and foundation for when I’m back in real life.”

But finding sober living for women in Richmond can be a challenge.

The McShin Foundation has nine men’s homes and only three women’s houses. There are other places to get help, like hospitals and community services such as the Richmond Behavioral Health Authority. But there aren’t as many residential services for women.

“The population for women is so underserved in our community,” said Clara Stokes, the chief development officer for Caritas, the umbrella organization for The Healing Place. “Before we opened, women had to wait months and months to get into behavioral health.”

In 2014, 10,856 Richmond-area women were in need of treatment for illicit drug use but did not receive it, according to the Behavioral Health Barometer.

Alcoholics Anonymous pivoted to online meetings almost immediately after the start of the pandemic. Moving to digital had positive and negative effects, according to many.

Some members missed the fellowship of in-person meetings and making real-life connections, while others were able to access AA meetings easier, based not only in their hometowns but also all over the world, 24 hours a day.

At the McShin Foundation, the recovery group has seen a sharp increase in alcoholism. Before the pandemic, 15% of its intakes reported alcohol as their primary addiction and other drugs as secondary.

“Now 25% of our intakes are alcohol primary and other drugs secondary. That’s almost double our intakes,” said John Shinholser, president and co-founder.

Shinholser believes that COVID-19 will “double the number of problematic long-term alcohol consumers in our country. There will be a ripple effect for the next decade from the alcohol increase during COVID.”

Meanwhile, alcohol sales in Virginia continue to rise in 2021.

If you or someone you know is struggling with addiction issues, call the SAMHSA National Helpline at 1-800-662-4357 or visit findtreatment.gov to find help or resources.

Monique, 27, had always been a social drinker, but after the pandemic started and she was furloughed from her job, her drinking spiked. She turned to the McShin Foundation, completed 30 days of sobriety and has committed to 60 more days of sober living.

Monique, 27 (28 next month), who is currently in recovery with the McShin Foundation and has completed an intensive 28 day program and committed to another 60 days with the program, poses for photos outside the Foundation home in Chester, VA Friday, April 23, 2021.